Our latest installment of Quick Bites brings us to Boerum Hill for a taste of New Orleans and plenty of napkins.

THE VIBE
The Gumbo Bros, who just opened this slip of a shop in Boerum Hill, aren't bros as in brothers but rather bros as in brahs or broskis. Their names are Clay Boulware and Adam Lathan, they grew up in Louisiana and Alabama, respectively, met at LSU, and unironically throw around hashtags like #wedembros and #EatGumboGetTurnt. They have made it their mission to "bridge the gumbo gap in NYC."

It's an admirable goal, to be sure. For some reason it's always been difficult to find top-notch Cajun and Creole cooking in these parts, and for a couple of years the bros have been making inroads with their gumbos and po boys, selling their take on Louisiana love at Urban Space markets around town.

The Gumbo Bros storefront is a big step up for Boulware and Lathan, and they clearly put a lot of thought and energy into the branding and physical details here. Folksy hand-painted signs cover the brick walls, Saints swag gets prominent placement, and framed Dixie Beer ads have been hung with care.

You order from the brief overhead menu in the back and find a stool at one of the four or five tables that take up most of the space. The bros don't take names to shout out when the food's ready, and there aren't those number flags either, so it's best to stay sharp while waiting for your order.

The mood was festive on opening night, busy with random expats and fellow bros crowding into the place. Bouleware and Lathan seemed delighted, if a bit charmingly overwhelmed.

THE BITES
The food at Gumbo Bros is good, with plenty of big flavors and comforting textures, but I wish they'd put as much care into its preparation and presentation as they did, for example, into their slick website.

Take the Shrimp Po Boy, one of the three such sandwiches on the menu. The bread here, shipped up daily from Leidenheimer bakery of New Orleans, is terrific: pliant, chewy, and eager to absorb any and all juices. The fried shrimp is plump and plentiful, the lettuce and tomato toppings crisp and juicy, the Duke's mayo slathered on thick. The Crystal hot sauce at your table should be deployed with reckless abandon. 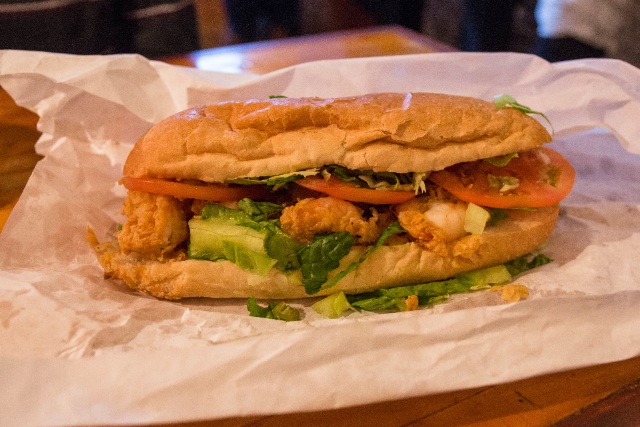 Problem is, the whole thing is assembled and delivered in such a half-assed way that you basically have to remake it yourself after opening the wrapper because most of the sandwich has fallen out all over the place. Also, the kitchen doesn't bother cutting it in half, and there are no knives available, so eating and, especially, sharing is unnecessarily difficult.

Same is true with the Roast Beef Po Boy, which tasted great—the meat is in chunks, the addition of pickles a smart move, the debris gravy and mayo creating a delicious sauce—but was even more of a disaster upon unwrapping. At least they cut the top half of the roll here, I guess.

No one needs pretty plating for their po boy, but you do want the ingredients in your sandwich to actually be in your sandwich when it arrives. You want to feel, at least a little bit, that whoever made your food cared about what they were doing.

There are three different gumbos on the menu, and we went with the classic Chicken and Sausage. The dark roux base is terrific here, with an intoxicating depth and pleasant greasiness, and the smoked andouille gives the dish plenty of kick. Again, though, there's a disheartening sloppiness to the proceedings, with the rice all clumpy and the soup splashing out of the too-shallow, too-unsealed container. I can't imagine what the takeout orders looked like after being carried home in a bag.

THE VERDICT
Bouleware and Lathan share an obvious passion for New Orleans and its food, and they've done a decent job bringing some of those vast riches up here to Atlantic Avenue. If they can just get a bit more focussed on the final step of that long journey, Gumbo Bros could be gold.

#boerum hill
#gumbo bros
#quick bites
#original
Do you know the scoop? Comment below or Send us a Tip