The Food Comes In Jars At Ancolie, Now Serving Salad In The Village Our latest installment of Quick Bites brings us to Greenwich Village for health food with a mission.

THE VIBE
After a long period of somewhat puzzling desolation during the aught years, when most of the cool-kid shoe stores had shut down and vacant storefronts dominated the landscape, West 8th Street seems to have regained its footing of late, with an array of solid cheap-eats spots feeding all those NYU students and, I guess, the people who eat like them.

It's not exactly St. Marks, but if you get hungry during, say, the next anti-Trump action in Washington Square Park, know that there are now several good refueling options just a block to your north.

Ancolie, which opened last week after a successful Kickstarter campaign, is the latest counter-service restaurant on the block, and it arrives with both a healthy twist—salads and whole grains dominate the menu—and a gimmick that is either delightful or eye-rolling, depending on your disposition: just about every dish is pre-packed and served inside a glass jar.

Your affable, enthusiastic chef and owner Chloe Vichot designed the jars herself—the top is wider than your usual mason number, allowing for easy eating—both because it's a fun and portable format plus it also greatly reduces the amount of waste produced by her take-out business. And repeat customers will get $1 off their next order for each washed-out jar they return to Ancolie. 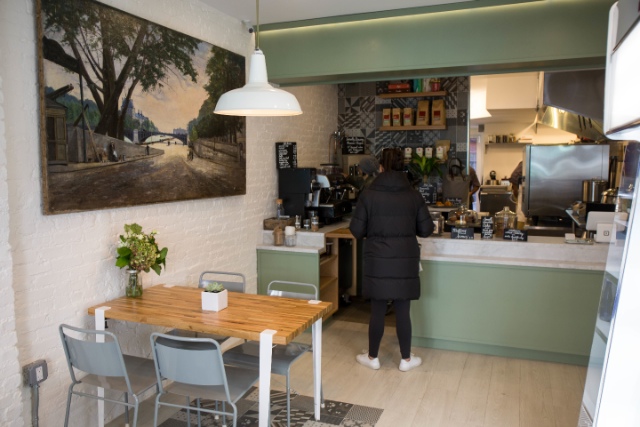 So that's the jar part of Vichot's operation. If you're eating in, the space is small but cleanly-designed, with a couple of tables (which may or may not be hogged by laptoppers) as well as a few stools at the window overlooking 8th Street. A brightly-lit display case, where you grab your jars of food on the way to the ordering counter, completes the floor plan.

The only real piece of decor, other than a few plants, is a large painting of the Seine depicting a spot along the river right near where Vichot grew up.

Ancolie is a cheerful, comfortable place at which you will almost certainly feel welcome.

THE BITES
Ancolie is basically a salad spot at this point—hot dishes like pasta and shepherd's pie are coming in a while, said Vichot—but almost everything I ate during two visits last week was big-flavored and satisfying. Vichot packs her jars in layers for maximum aesthetic appeal, but you'll want to shake vigorously and mix everything around before opening.

The Rainbow Salad of bitter greens, sweet carrots, cauliflower rice, and crisp red cabbage was perfect with its simple dressing of oil, vinegar, and a dollop of dijon. Maybe it was because I was coming off three days of consuming nothing but carbs and sugar out in Western New York when I tucked into this beauty, but I could feel myself getting healthier with each bite.

For a heartier jar, try the Chicken Grain salad, with its base of chewy farro topped by pickled apple, sweet squash, and chunks of roasted bird with crisp bits of skin. This shakes up quite nicely, too. Less successful was the Winter Salad, which despite my perhaps-feeble best efforts remained stubbornly separate, forcing me to plough my way through a pile of undressed kale to get to the roasted vegetables, goat cheese, and cranberries beneath. 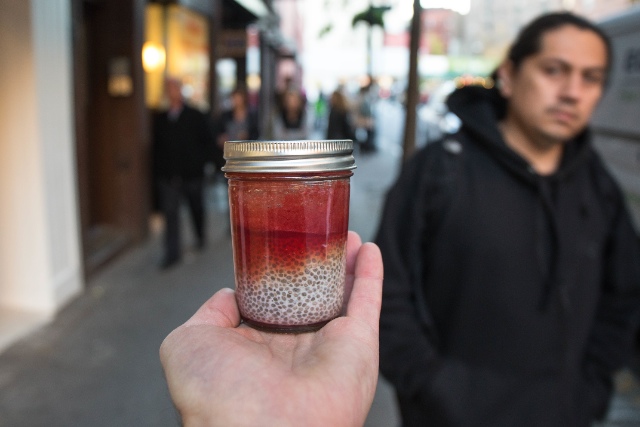 Vichot makes several breakfast/dessert jarred options as well, including an excellent Granola Parfait—tangy yogurt, zingy cherry coulis, sweet and chewy cereal—and a decent Coconut Chia Pudding. But if you're in the mood for something truly decadent, get Vichot's Small Chocolate Cake, an insanely rich creation using an old family recipe ("passed down through generations") that looks like no big deal and is, in fact, pretty tiny, but really packs a wallop. It's so delicious I could easily eat four or five of these, but then I'd just regret it. One does the trick.

THE VERDICT
If I were a certain sort of NYU student or a yoga-doing Village local I can easily picture stopping into Vichot's cafe on a regular basis, to grab a light lunch or quick supper, and feel good about my life choices.

#ancolie
#greenwich village
#quick bites
#original
Do you know the scoop? Comment below or Send us a Tip