Pooja Bavishi, founder of the superb Malai Ice Cream company, is a happy woman these days. Last spring she became a Tory Burch Foundation Fellow for young women entrepreneurs, Whole Foods started carrying pints of her ice cream in late 2017, and two weekends ago, after successful stints at Smorgasburg and Gotham Market at Ashland, Bavishi opened the doors to her first full-fledged storefront parlor, Malai on Smith Street in Carroll Gardens.

Well, kind of. Construction within the bright, cheery space won’t be finished until early 2019—the spot still needs a production space built in the back, a scooping freezer and counter big enough to fit at least a dozen flavors, plus seating in the front. But rather than deny the good people of Brooklyn her sublime creations until the paint dries, Bavishi has set up a pop-up inside of her own store, scooping four to six flavors daily, with regular hours on weekday nights and all day on the weekend.

Rest assured, even in limited-availability mode, the quality of Bavishi’s ice cream is at the same level of deliciousness as it’s always been, ever since she first unveiled her wonderfully creamy, intensely flavored frozen delights at the Hester Street Fair in 2015. And her menu in the new setting still features flavors you won't find in other shops. Bavishi grew up in North Carolina, but her parents immigrated here from Gujarat in northwest India, and all of the flavors at Malai are inspired by and/or infused with the South Asian fruits and spices of her childhood. Even the Salted Brown Butter Pecan, which is made with ghee.

In some ways, securing a permanent home for Malai is the realization of a childhood dream for Bavishi. She told Gothamist:

"I've loved making desserts from when I was very young, mostly because I made the connection early on that desserts made people happy, and I knew I wanted to run a business like that someday. But it wasn't until 2014, when I was hosting a Friendsgiving, that the ice cream idea really clicked. I was making desserts for everyone and noticed my ice cream maker was just sitting there... I realized that ice cream can take on any flavor that you give it, and that the more robustly you flavor it, the better it will be, in my opinion. And so there was a small section in my kitchen that my mom always stocked, what my sister and I both called 'the Indian side,' and it was filled with all the spices we grew up with, and so I got fresh ginger and star anise and I flavored it the way I would flavor any savory Indian dish that my mom would make, and my friends loved it, saying they never had anything like this before."

And Bavishi seems nowhere close to being done. "I love challenging myself," she says, "and being a woman of color in any leadership position presents additional obstacles and setbacks than what one might otherwise face. Every step that we take legitimizes Malai even more, and it makes us a more established player in the ice cream world and in the New York food scene. Which is important for me, and for other women who might follow." 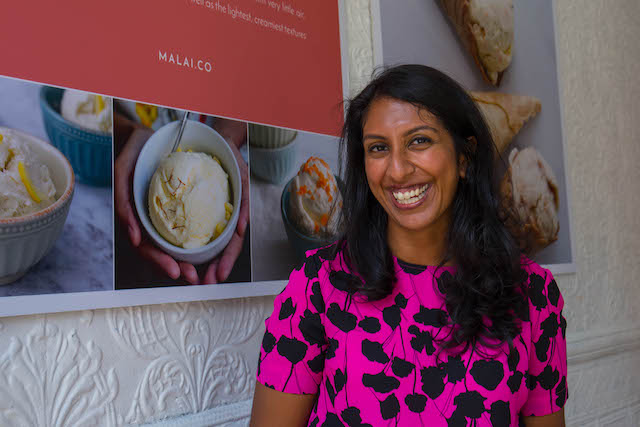 #carroll gardens
#malai ice cream
#pooja baviahi
#Pooja Bavishi
#original
Do you know the scoop? Comment below or Send us a Tip