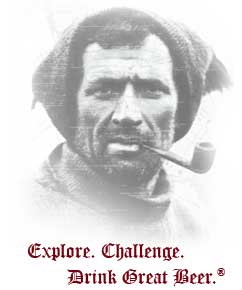 We expect a lot from our beer. It needs to be refreshing. It needs to be bold and flavorful. And it needs to keep us as excited on the last sip as we were when the first pass crossed our lips. For us, a truly great beer is the one that keeps going after most beers have stopped. So when we came across Endurance Pale Ale on tap at Drop Off Service in the East Village we thought if the name matches the brewer’s philosophy then we might be in for one tasty Saturday afternoon (weekend happy hour special of $3 and $4 pints ends by 8pm).

The beer rightfully earned its name. It was crisp with layers of hop, spice and citrus notes that lingered with admirable staying power. However, its moniker was not selected based on what was in the glass but rather a tribute to the Legendary 1914 Endurance Expedition to Antarctica (which may explain why it was so crisp and refreshing). The Brewery proudly recounts the tales of the indestructible Second Officer Tom Crean (pictured above) and his 26 man crew who transversed the glacial continent, likely in search for beer. Ok, not just beer, they were probably looking for other things too, but mostly beer.

We respect that. We’ll raise our glass to you as well, Tom Crean. We would also go far and wide for a great pint of frosty beer, but luckily we don’t have to.