The Extensive New Menu At Greenpoint's Torst Is Ridiculously Good

THE VIBE
Dedicated readers of this website already know that Greenpoint's Tørst is one of the best beer bars in NYC, with twenty-one different draft lines running nightly! Not to mention their more than 200 rare and exotic bottles. Judging by the happy hordes I saw there last weekend, gleefully drinking away their Saturday afternoon, this four-year-old spot remains a popular destination, even when a 5-oz pull costs 8 bucks.

The food situation at Tørst has been a bit more in flux. First there were just a few bar snacks, including some excellent rugbrød, Then the back room was transformed into the well-regarded Luksus, which earned back-to-back Michelin stars for its Nordic tasting menu. Luksus closed at the end of 2016, but last month the kitchen debuted an almost-all-new lunch and dinner menu under the Tørst name, from which you can order no matter where you're sitting. Or standing. 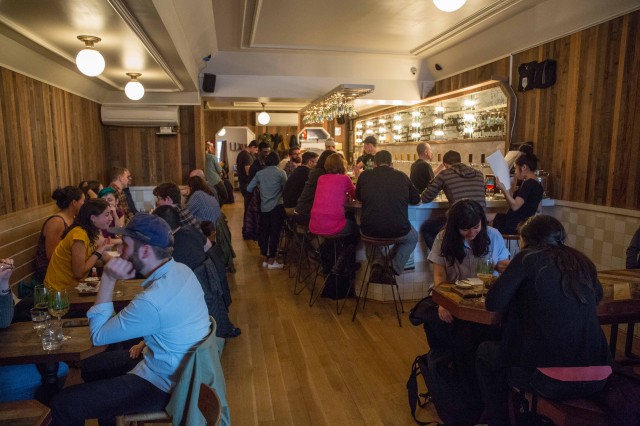 All orders are placed at the bar, so after you've secured a seat at one of the two-tops along the wall (convertible to four- or six-tops; you can rearrange at will), or at one of the larger communal table in the center, head on up and talk with one of the many bartenders behind the white marble. They are all extremely knowledgeable, helpful, unflustered, and friendly.

Design-wise, Tørst is, as everyone says, "sleek Scandavian": minimalist, lots of blond wood, warmly (and not too dimly) lit. When it's not overwhelmed with day-drinkers, it is an exceedingly pleasant place to be.

THE BITES
I never ate here when it was Luksus, but the new head chef, Jesus Cervantes, spent two years in this kitchen during Daniel Burns' Michelin-starred run. And clearly Cervantes was ready to move up: everything I had at Tørst was superb.

The menu is divided into snacks, sandwiches, and small plates, but no matter what else you're getting, you should also get some bread. On Saturday my order of the Housemade Bread included two thick slabs of sensational sourdough, a lovely round mini-loaf of Oat Porridge—baked with beer, of course, in this case Evil Twin's Yin Imperial Stout—and a crock of whipped, slightly tangy butter. It was a knee-buckling reminder of just how good a bite of bread and butter can be. 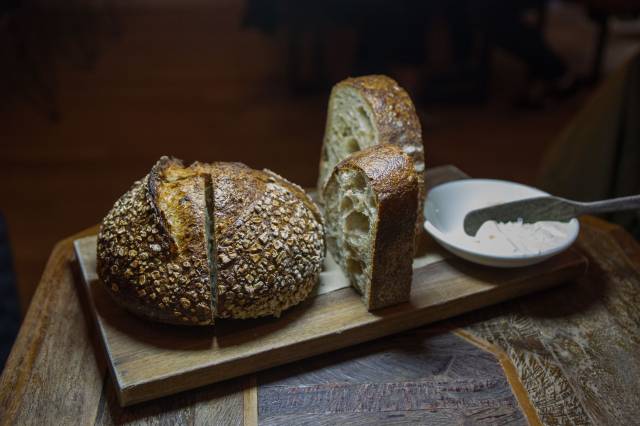 The Crispy Chicken Skin is a fun and satisfying riff on the classic plate of wings, with its crackling pieces of skin flattened and forged together, it's served with a generous bowl of thick Point Reyes bleu sauce for dipping (this goes nicely on your bread, too), pickled slivers of celery, and a squirt bottle of Crystal hot sauce. For something more complicated and Nordic, order the chunky Beef Tartare, which may have been the single best dish I had across two meals here. The menu says it contains salted plum and pickled green walnut, but there was also jerky-type pieces of meat in there, and shiso leaf, and I guess some sorcery because my god this was delicious.

Another big winner in the "share" section was the Asparagus dish, which owed much of its explosive flavor to the plentiful pieces of smoked trout nestled within the spears, the pile topped with shavings of cured egg yolk and smoothed out by a puff of potato creme. For heartier fare, tuck into the French Montana, a decent-sized sandwich rich with sliced beef shank, sharp horseradish and gooey gruyere that arrives face down and drowning in its own juice. The lighter Black Bean Torta was also a solid choice, with chewy Oaxaca cheese, buttery greens, and a not-insignificant spicy kick.

THE VERDICT
There's lots of fantastic food coming out of the new Tørst kitchen, and I can't wait to go back and try more of it. It's not cheap, especially if you're drinking—six dishes plus a generous tip each night cost me about $100 total, no beer involved—but if you have the funds or need a new special occasion spot in the neighborhood, put Tørst at the top of your list.

Tørst is located in Greenpoint at 615 Manhattan Avenue between Nassau and Driggs and is open daily at noon for lunch, with the dinner menu starting at 5 p.m. (718-389-6034; torstnyc.com)