The Explosive History Of Kossar's, NYC's Most Famous Bialy Bakery

Puffy and floury, oniony and garlicky, the perfect vehicle for butter—bialys are one of the city's great carbohydrate treasures and there are none so important to our city's history than Kossar's, the longtime Lower East Side shop that's been baking them up for 80 years. With the closure of Coney Island Bialys and Bagels, Kossar's is the last vestige of what was once a thriving bialy scene in New York City, especially the LES, where many Eastern European Jews migrated and settled. And though they've been closed for a recent renovation, the bialy bakery is poised to make a big comeback later this week.

"The Lower East Side in Manhattan was bialy central for the world," explains Evan Giniger, the current owner of Kossar's who took over in 2013. "Morris Kossar thought that opening a bialy-only store would be a good idea. And you have to kinda think about what a concept that is, to open a single-product store that could sustain itself. It's unthinkable today that you could open up a store that only sold one thing."

Yet that's exactly what Kossar did, along with business partner Isadore Mirsky, opening Mirsky and Kossar's at 145 Clinton Street in 1936, nine years after arriving in the United States from Russia. Back in Bialystok, Poland—where the bread derives its name—and elsewhere in Eastern Europe, bialys were a daily part of life, something that Mirsky and Kossar's, and their competitors, wanted to recreate in the United States.

Mirsky and Kossar's gamble paid off, of course, and the shop thrived alongside others in the area. Bialys became so popular, in fact, that a Bialy Bakers Union was created, a side note that becomes even more compelling when paired with a suspicious explosion that rocked the bakery in 1958.

Around 6:30 a.m. on February 19th, an explosion destroyed the bakery's plate glass window and blew open the door to the bakery's iron basement. "The police found a fifty-foot length of wire running from an iron post in the bakery's basement to a building two doors away at 141 Clinton Street," read a report in the NY Times. "There, they said, the wire was attached to a nine-volt dry cell battery."

Though never explicitly stated, the Times piece heavily implies a kind of union retaliation against the bakery—and six others—which had been the subject of several strikes since the beginning of that month. The bakery, known as Kossar's Bialystoker Kuchen Bakery by that time, had recently left the Bialy Bakers Association, Inc. and signed a contract with Local 3 of the Bakery and Confectionery Workers Union, which at the time was at the center of an embezzlement scandal. 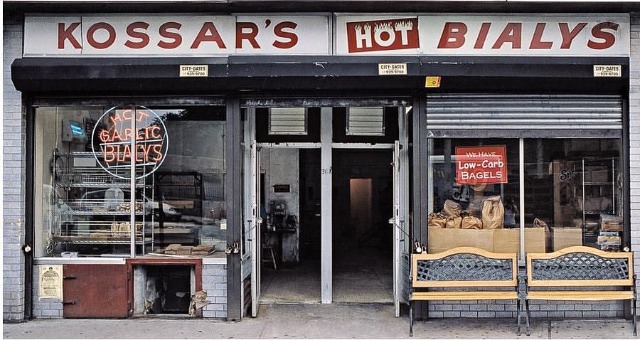 In the '60s, Kossar's would move to what is its current—and hopefully permanent—home at 367 Grand Street near Essex Street. But it would be a time of upheaval for the bialy, as the rise of the bagel threatened the survival of its smaller cousin and Jewish populations began to move to other parts of the city and country.

"The bagel took away from a lot of the appeal of the bialy when it took off in the sixties and seventies because of people’s need to grasp fast sandwich food for lunch," muses Giniger. "It’s bigger, the shape of it is more consistent throughout; you cut a bagel in half and you have two equal halves. You cut a bialy in half and they don’t look the same top and bottom. So the bagel allowed people to make sandwiches quicker and as the population had less time for lunch and needed to grab something quicker, the bagel was the perfect vehicle for that."

Still, while the bagel may have eclipsed it, the bialy didn't go extinct. In 1976, Gloria and her husband Daniel Scheinin—who had taken over the business—were still baking 2,250 bialys weekly between the two stores they operated at the time, a total of 9,855,000 bialys a year. They sold the bialys for just 13 cents each, with larger versions selling for 30 cents ("bulkas") and 50 cents ("onion disks"). 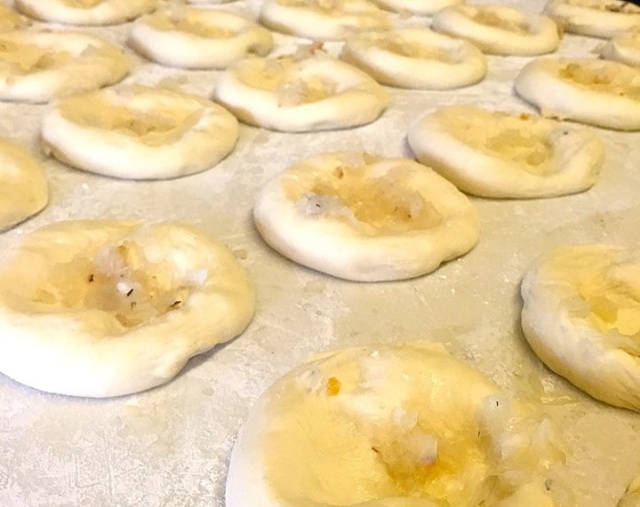 In 1998, the Scheinin's sold Kossar's to Juda and Debra Engelmayer and Daniel and Malki Cohen, who would be the bakery's caretakers until August of 2013, when current owners Giniger and David Zablocki purchased the business. And through it all, all the owners would continue to make the bialys the way Morris Kossar did back in the '30s. "Their few changes have not compromised the earthy savoriness," Mimi Sheraton, author of the seminal bialy book The Bialy Eaters: The Story of a Bread and a Lost World, would say in 2000 and would likely say again of Giniger and Halprin's current stewardship.

"We use the same recipe that they’ve been using for 80 years, we haven’t changed the recipe at all," Giniger says. "We really try to adhere to tradition as much as we can." Bialy creation is quite simple, actually, compared to the bagel. There are four ingredients: flour, water, salt, and yeast. The dough is left to rise, formed into balls, then left to rise again; after, it's shaped into the classic disc form, filled with garlic or onion and then baked in a rotating deck oven.

"You can almost call it like a peasant bread, which if you think about where it came from, that makes sense," Giniger continues. "It had to be something that was easily produced, fast and economical." 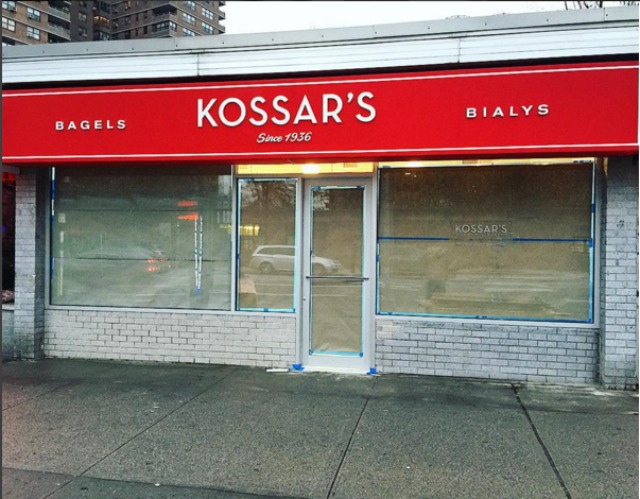 Change isn't a common thread in Kossar's history, but in September of last year the bakery closed for renovations. A new era at Kossar's means an expansion and rebranding, including changing their official title to include the word "bagel," which will precede bialy on the marquee. Giniger and Halprin have stayed somewhat mum about what to expect—though we'll have a look at the changes later this week—but they'll be doing some breakfast sandwiches and will be able to give customers a schmear of cream cheese or butter (instead of the DIY operation in place before) when they reopen on Friday.

But is there a right way to eat a bialy?

"In Mimi Sheraton’s book, she says the proper way to eat a bialy is upside down—do not cut the bialy—you flip it upside down and you spread butter or cream cheese on the flat side of the bottom. But I don’t know if there’s a proper way, everyone has their own way," Giniger confesses. "If I show up at the store at 6 a.m. and the bialys are hot out of the oven I’m just going to grab one and have a hot bialy."

So are we in the midst of a bialy revitalization? Other shops have taken up the mantle—Hot Bread Kitchen and Roberta's, to name a few—and by Giniger's estimation, the bialy has never been more popular—in his lifetime, anyway. "I grew up eating bialys. My father always preferred a bialy to a bagel, so I’ve kind of always been aware of the bialy and I always just thought it was a special product more than something that had faded from popularity because it was never popular growing up."

"As I’ve been in the bialy business, it feels as if everybody in the world eats bialys because I’m just bombarded with emails and people just telling me they love the bialy, they can’t get a bialy anymore, they wish they could get a good bialy in their neighborhood," Giniger reveals. "It feels like people all over the country, and even all over the world, are clamoring for a good bialy, much more so than I would ever expect if I wasn’t intimately involved in the business."