This isn't the ideal time to compare oneself to a struggling business dealing with the fallout of a large public health crisis, but a California pizza chain that dubs itself the "Chipotle for pizza" has signed leases for two NYC locations to open this spring. Granted, they're referring more to the "quick yet not crappy" model of nouveau fast food—not the food-borne illness that sickened people across the country—but still.

Pieology will open restaurants in Williamsburg and Greenwich Village, according to the Real Deal. The "fast-bake" chain, which has 135 stores across the United States, will open first in a retail condo at 168 Bleecker Street, followed by a location inside a brand new rental unit at 285 Broadway in Williamsburg. 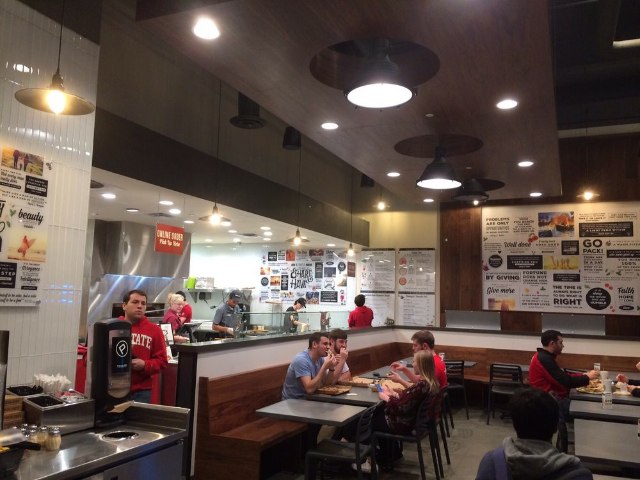 A Pieology in Raleigh, NC (Yelp)

In addition to baking up the pies quick, damn quick, the chain employs the choose-your-own-adventure model of modern dining. Diners design their own pies—including the type of crust and sauce—from a selection of 40 different cheeses, meats and veggies and "after bakes," sauces like pesto and bbq that are applied after the oven. There are also pre-designed pizzas that range from simple mozzarella to "Alfredo's Alfredo" with a whopping 10 ingredients.

On first glance, the pies seem to have a lot in common with the "bar pie," with thin, crisp crusts about the size for one person to devour easily in one sitting. (I'm so, so sorry, Adam Kuban.) Prices in other parts of the country hover around $9 for a customized pizza.

In 2015, Pieology was declared the "fastest-growing restaurant in America" by Business Insider, and founder Carl Chang has grown the business more than two-fold in the intervening years, with plans for 70 more locations to open in 2017 alone.

Chang, who has either never set foot in New York City or is willfully ignorant about our pizza practices here, declared that "pizza for us was somewhat broken...[it] used to be a celebration when you were with family and friends ... now it somewhat has become a bit more [of a] convenience food or a coupon food if you will."

There's nothing wrong with a little convenience pizza, but be careful throwing around the word "broken" now that you're entering the NYC pizza gauntlet.

#chipotle of pizza
#pieology
#pieology pizzeria
#pizza
Do you know the scoop? Comment below or Send us a Tip