South Asian taxi drivers in New York know the shortest way to the airport, the fastest way to get a green card and the location of the nearest restroom wherever they happen to be. They also know the best places to eat. During many taxi rides across the city researching my book, I talked to Indian, Pakistani and Bangladeshi drivers about the best places to get real Indian chai, fragrant biriyani rice, and chicken korma.

I soon realized that a line of yellow cabs outside a hole-in-the-wall joint was a culinary recommendation in and of itself. My taxi driver friends pooh-poohed the idea of paying restaurant prices and recommended places where a full meal costs less than $10. Here are the top five taxi driver cafes in Manhattan, where the food tastes like home cooking transported straight from South Asia in all its spicy, messy and flavorful glory. 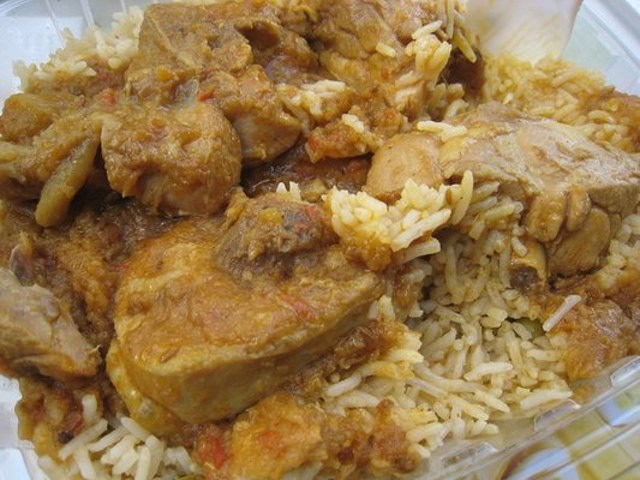 Lahore Deli: This miniscule Pakistani joint in high-rent Soho seems to have been carved out of a utility closet, or perhaps part of a storage room. Inside, there is barely room for a glass case of food and a couple of stand-up counters—but it’s always busy. Cabbies and South Asian office workers in the know stop by for the fragrant rice biriyani, which alternates between mutton and chicken every day except Monday. Women carrying yoga mats get steaming, milky chai or rice plates piled high with cauliflower, pea curry and eggplant. I liked the silky okra curry cooked with onions and the steamed, flattened chicken (chapli kabab), eaten with long grain rice. These are less oily than some of the other options but still pack a spicy kick.

Since there's barely room to eat here, I recommend availing yourself of the free jars of pickles on the counter (garlic and mixed vegetable) and taking your food to the nearby park at Christie Street. But if you must stay, you can watch all the action unfold on the security camera screen, which offers an arty, split-screen view of the entire place. Either way, prices here are low, with samosas running just a buck and other plate combinations ranging from $5 to $6. In case you fall in love with any particular dish, there are single item "big containers"—$7 for veggie, and $8 for meat—which are enough to feed your extended family. 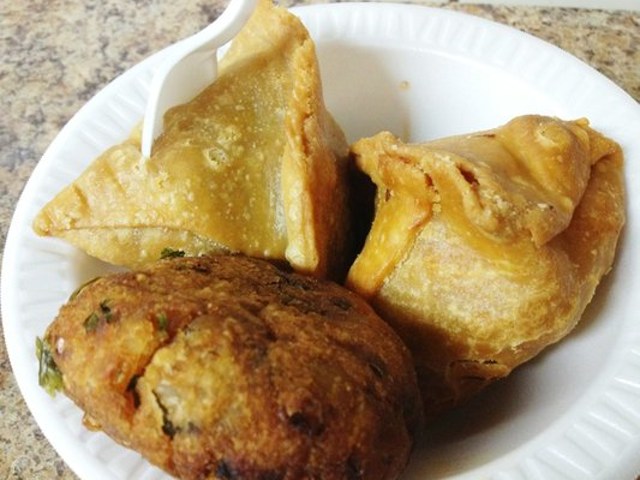 Punjabi Grocery & Deli: This long, narrow space off East Houston is known for its vegetarian-only cuisine. Run by turbaned Sikhs, it's decorated with a huge picture of the Golden Temple—the holiest site for Sikhs—and is a true emporium. You can eat here, as well as stock up on the "essentials" arrayed on the wall: Punjabi DVDs and newspapers, tamarind juice, Red Bull and windshield wiper fluid.

But the focus here is on the food, which is served piping hot and very spicy. Like most of these cafes, dishes comes out of the glass case: you choose from six or seven options, which are then microwaved in a styrofoam bowl—a special "green" container is also available for an extra 50 cents. There are the usual vegetarian dishes like daal (lentils), chana masala (chickpea curry) and saag (spinach), but also a delicious curry of shredded cabbage and another made out of karela, a bitter melon whose sharp taste is balanced out by the sweetness of the potatoes. They also have great $1.25 samosas, and if you need a new take on this classic, there is samosa chaat, made with crushed samosas, chickpeas and a yogurt and tamarind sauce.

There is one tiny space at the back with two seats, but the eating is done mainly at the long, stand up counter. Get the food to go or rub shoulders with turbaned cabbies and livery drivers in suits. One of the most amazing deals in town is the "small" rice bowl, topped with two veggies for $3.50. This was enough for a hearty meal for me but the $5.50 option with three veggies should yield you leftovers. 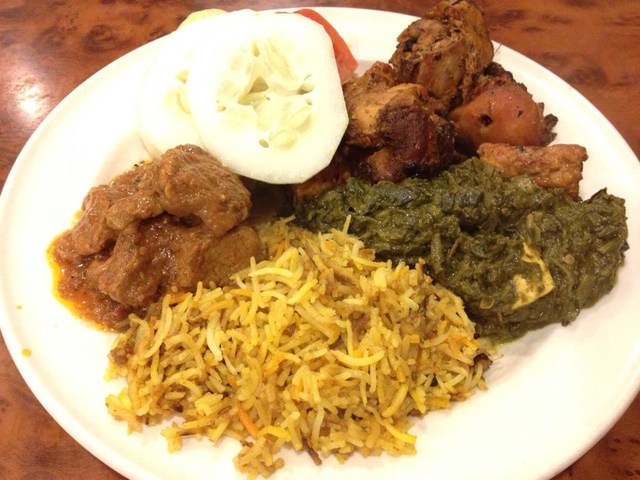 Haandi Restaurant: This Curry Hill restaurant has two levels; I recommend you skip the street level with its $9.99 perennial buffet—unless you’re a solitary cabbie on the clock—and head to the light-filled upstairs. There, you can choose from a staggering variety of meat and vegetable dishes, which will be heated and handed to you by two cheerful ladies wearing brightly colored salwaar-kameez. Depending of their assessment of your character, you either pay right away, or after you eat.

While Haandi purports to be pan-South Asian, this is Bangladeshi cooking, and less highly spiced than the downtown Punjabi places, though no less flavorful. My favorites here are the grilled meats, eaten with the fresh naan bread baked in the kitchen. Opt for the $8.99 "Meat Plate," which comes with two meat options and one vegetable. On my latest visit here, I had a succulent seekh kabab (ground lamb), and chicken tikka, which here was a normal color, not the violent orange found at other Americanized places. All the plates are served with salad and raita (yogurt) and there are pitchers of water on each table; or, wash your food down with flavorful, spiced Kashmiri chai. The dudh patti—very milky tea—can double as dessert.

This place gets a huge lunch crowd, but there is plenty of seating upstairs. Avoid sitting under the television, which is tuned to homeland TV and belts out deafening Bengali movies, interspersed with commercials for ‘Fair and Lovely’ skin whitening cream. And on your way out, you can check out the latest flyers from LIMO (the League Individual of Medallion Owners) and job postings from Green Boro Livery. 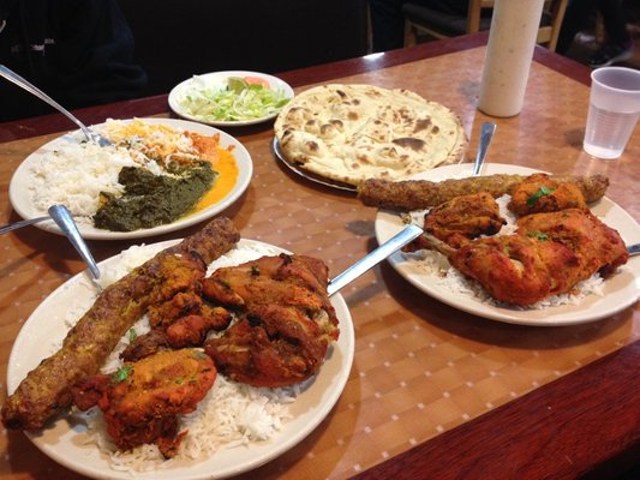 Lahori Kebab Restaurant: This low-ceilinged basement space is across the street from Haandi, but in another culinary tradition: this is the distinctive cooking of Pakistan’s Punjab. The space is presided over the regal owner, who wears a black fez and is addressed by many regulars as Janaab, meaning "Your Excellency."

And this is serious food, made the way my Muslim aunties used to cook: rice biriyani made with saffron (both chicken and mutton), keema (spiced ground chicken curry), aachari chicken (made with piquant pickling spices), nihari (beef or lamb slow cooked to a velvety texture) and haleem (meat stew with lentils). There are also specials each day: the highlights include the spicy quail on Thursdays and the rich kofta (meatball) curry on Mondays, which is served with hard-boiled eggs.

This is rich food meant to eaten at special occasions, but at Lahori Kabab, it’s an everyday treat. If you don’t feel like indulging, there is also a wonderful, flaky $5 keema naan (bread stuffed with ground chicken) and plenty of regular food like spinach, chickpea curry and tandoori chicken. Seating here is cramped, but clean and serviceable. After you’ve eaten yourself into a stupor, you can sit here for a few minutes and get a worms-eye view of Lexington Avenue, which always includes a few yellow cabs hunting for parking, the drivers already salivating. Various combinations of meal plates are in the $8 - $9 range. 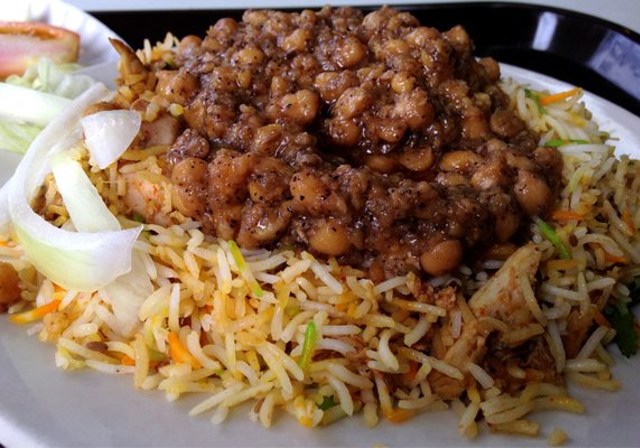 Kashmir Cuisine of Pakistan (via Yelp)

Kashmir Cuisine of Pakistan: Given the economics of Manhattan, it makes sense that all the cab driver eating places are concentrated downtown. This joint was the only one on the West side recommended to me by cabbies. It is right by the Lincoln Tunnel, which must make it appealing to cab drivers returning from long expeditions. The name of the restaurant is an interesting juxtaposition, since Kashmir is actually in India, but has a mostly Muslim population and is considered a disputed area by Pakistan. But whatever the politics behind the name, this is a friendly, straight up dhaba (roadside café), with booths, a small hut that sells phone cards and rents ancient VHS tapes, and a well-used prayer area in the back, separated from the rest of the restaurant by a wooden screen. If you are a cab driver, you can eat, pray, and...well, eat some more; the love is in the food.

The neon sign in the window says “Nice and Spicey” (sic), and they are not kidding. This is standard Pakistani food, and they have all the usual suspects: chicken tikka, channa masala (chickpea cury), chicken korma (a curry redolent with onions) and rice biriyani. But I actually prefer to stop by here and have a late afternoon teatime snack instead of a meal. They have excellent samosas, chili and onion pakoras (think of a spicy tempura made with chickpea batter) and flaky patties filled with ground chicken. The tea is a taxi driver’s dream: the Kashmiri chai is made with crushed pistachios on the top and the regular chai is packed with cardamom. All the platters are $8 - $10 with tea and a hefty snack setting you back $5 or less.

A.X. Ahmad grew up in India and now splits his time between Washington, D.C. and Brooklyn. His new book, The Last Taxi Ride, is about a NYC cab driver who is accused of murdering a Bollywood actress. Follow him on Twitter

#cabbies
#indian
#pakistani
#punjabi
#restaurant guide
#south asian
#taxi drivers
#original
Do you know the scoop? Comment below or Send us a Tip
A new Gothamist is coming! We’ve moved comments over to our beta site. Click here to join the conversation and get a preview of our new website.