In this week's Quick Bites... we find a better Best Veggie Burger, this time on Bleecker Street.

THE VIBE
Did I miss something? Did there used to be hordes of half-starved vegans wandering aimlessly through the streets of Greenwich Village, nowhere to go, nothing to eat? Because one peek inside the insanely-popular by CHLOE at any time, any day of the week, and lines 20 deep at the counter, tables are filled, and the whole place buzzing with "what-a-time-to-be-alive!" excitement. You would think this the only vegan restaurant anywhere in the Tri-state area!

First of all, everything about by CHLOE, design- and decor-wise, is appealing, from the hanging wicker pod chairs to the cute graphics to the flattering lighting. The floor is summery and striped; the longest wall is covered in dramatically oxidized mirrors, and the wide communal table, softened by a row of potted plants, helps with the constant fluidity of the seating arrangements. It's all slightly shabby chic, but with cartoon-style signs and icons all over the place.

The corner location in the heart of NYU territory probably helped make this an insta-hit as well, with its wraparound street frontage flung wide open throughout the warm days and nights since its opening in late July. One vegan source told me she had only about a week before everyone else discovered that there was something special going on here.

Despite the lines (which move much faster than you expect), by CHLOE is, at its core, a fun place to be, and I can't think of another restaurant this year at which I had so many friendly, chatty encounters with both the staff and my fellow patrons.

But the most important reason why everyone is so happy at here is, of course, the food, all of it the creation of Chloe Coscarelli, who wrote several well-regarded cookbooks and emerged victorious from a Cupcake Wars campaign before getting her name on the jauntily-striped marquee here on Bleecker and MacDougal. People here gush about what they're eating, about what they ate the last time they were here, and about what they can't wait to try next.

THE BITES
The by CHLOE menu is a simple affair, mostly salads and sandwiches, a few sides and specials, and a small mountain range of baked goods up at the counter. Everything is 100% vegan and certified kosher, and much of it is gluten free as well.

You can order anything with confidence, it seems—I was served nothing but winners on two recent feasts—but if you're looking for an entry point, the Guac Burger might be the best thing here, and is definitely the best veggie/vegan burger I've ever had. The patty is made from black beans, quinoa, and sweet potato, and, in addition to tasting really good, has a real density and texture to it. The toppings include crisp tortilla sticks (smart), corn salsa (nice), chipotle aioli (spicy!), a mound of lively guacamole, all on grainy bun. A terrific sandwich. 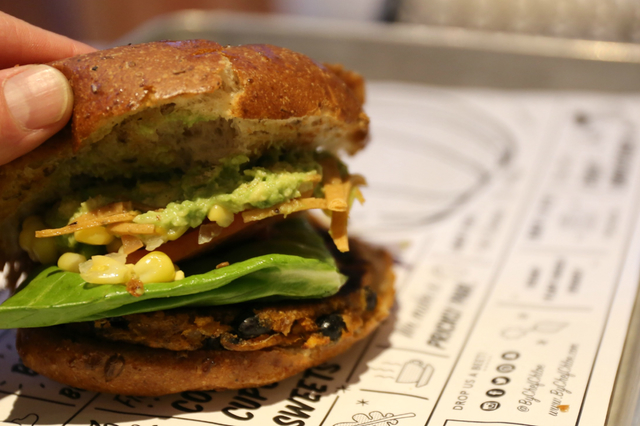 Several of those same ingredients can be found in the ridiculously addictive Quinoa Taco Salad, with the key addition of crumbly, spicy, setain "chorizo"—I inhaled this sucker. And then there's the Shitake "Bacon" (it's smoky and chewy) that tops the first-rate Mac N' "Cheese," with al dente shells and a thick, creamy and delicious sauce made from sweet potato and cashews.

Also on the side, there's the air-baked french fry options, regular or sweet potato both satisfy, and the daily soup on the night I ate it was outstanding, a dense sweet corn and jalapeño number that hit the balance between those two exactly right.

I enjoyed most things I tried at by CHLOE, but I probably wouldn't order the Spicy Thai Salad again (the apricot-sriracha glazed tempeh and peanut dressing were too sweet for me), nor the Pesto Meatball sandwich which, though it tasted great, was a bit of a mush fest, and the portobello and veggie balls lacked any sort of bite.

Finally, and given Coscarelli's Cupcake Wars triumph, perhaps unsurprisingly, the baked goods here are superb. Or, at least the Chocolate Chip Cookie (rich and gooey) was, and the seasonally-appropriate, wonderfully moist Pumpkin Cupcake with maple frosting and burnt marshmallow piled high on top. Heck, even the Kale Cookies and Cream ice "cream," which I initially dismissed as vegan trolling, was good, both dessert-sweet and texturally satisfying.

THE VERDICT
Neighborhood vegans will want to eat at by CHLOE several times a week, and everyone else, vegan and non, should put this into heavy rotation... for lunch, snack, dinner, dessert, whenever you're around these Village parts and hungry. Like I said, you will see a long line pretty much always, but it does move fast, and you get one of those buzzing devices that summons you back to counter when your food is ready. I never witnessed anyone standing awkwardly with a tray, nowhere to sit. Trust in the turnover. Eat with strangers. Enjoy.

#by chloe
#quick bites
#vegan
#original
Do you know the scoop? Comment below or Send us a Tip