The Best Rooftop Bars In NYC

We may have been denied blue skies and a beaming sun too often in recent weeks, but rooftop bar season is here at last. Many of the coveted al fresco spots in this city come with annoying crowds and overpriced drinks, but there are still a few boozy aeries that offer an elevated escape, or at least make the expense worthwhile. Here are our favorites; as always, leave yours in the comments. 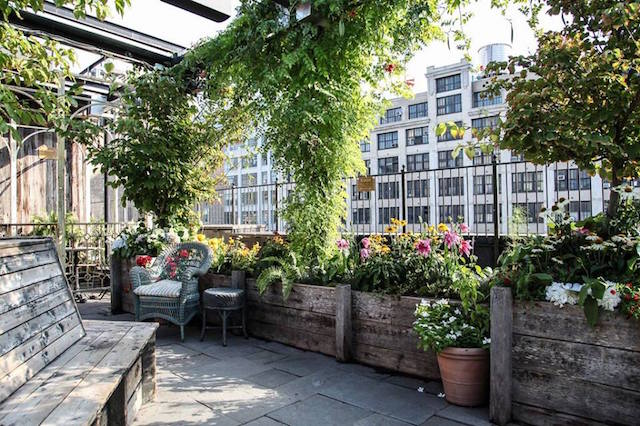 GALLOW GREEN: The McKittrick Hotel's bewitching outdoor bar boasts some pretty gorgeous decor, with vintage train tracks and boxcars, lush greenery, live jazz music and, like the sprawling Sleep No More set that lives below, an ethereal, haunting old-world ambiance. The rooftop bar's summer iteration (it boasts a winter cabin theme in colder seasons) debuted last week and opens for brunch this weekend, and they're promising plenty of creative cocktails at all hours. Expect drinks to run upwards of $15, with punch bowls to share clocking in around $50/$75.

Gallow Green is located at 542 West 27th Street between Tenth and Eleventh Ave in Chelsea (212-564-1662, mckittrickhotel.com/gallowgreen). 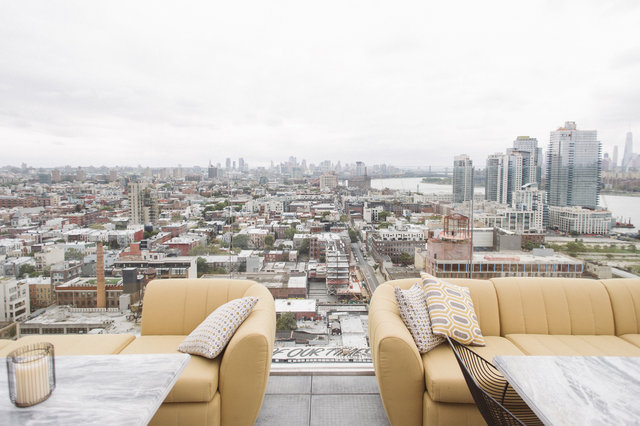 WESTLIGHT: We were blown away by the views at this newish Williamsburg hotel bar when it opened last September, and it's time to return to all that Manhattan skyline goodness now that rooftop season's come our way again. Sitting atop the William Vale Hotel (yep, that one), Westlight boasts nearly 360-degree views over Brooklyn, Queens and Manhattan's east side, along with the requisite $15-$17 cocktails (the El Diablo is particularly good) and slightly-cheaper wines and beers. The bar also serves small plates like Spiced Chicken Empanadas ($14) and Seared Octopus Skewers ($15) and heftier fare like the Westlight Burger.

Note that, at least last year, this spot was POPULAR, so expect some lines down Wythe Avenue come summer. 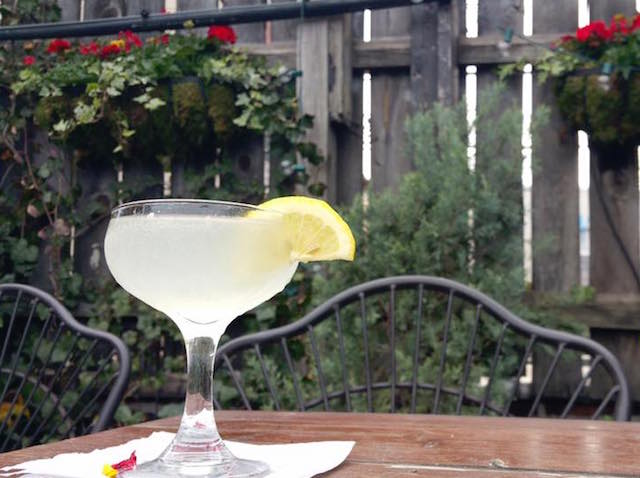 NIGHT OF JOY: I moved back to New York six years ago, and this has been my favorite rooftop bar in the city ever since. A fairly casual rooftop drinking experience, this Williamsburg bar abutting the BQE trades in $16 cocktails, long lines and fancy attire for graffiti decor and patio furniture. They've got a stellar happy hour deal from 5 to 8 p.m., with signature cocktails and (VERY LARGE AND STRONG) frozen margaritas running $6-a-pop. You can also score $4 beers and other discount cocktails, plus it's a lot easier to grab a metal table in the afternoon than in prime Saturday Night Brooklyn time.

Night of Joy is located at 667 Lorimer Street between Jackson Street and the BQE in Williamsburg, Brooklyn (718-388-8693, nightofjoybar.com). 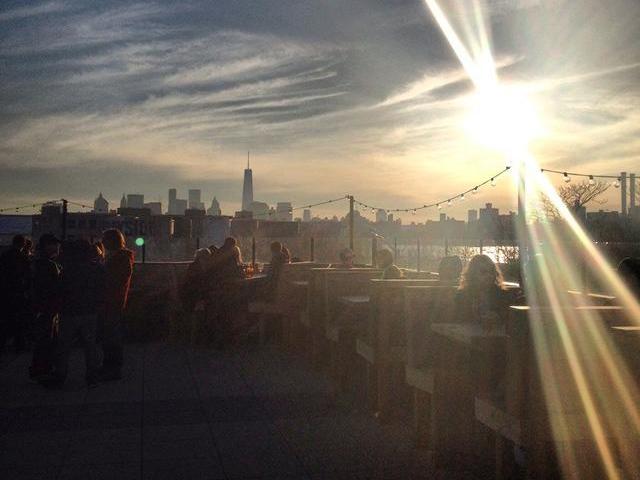 NORTHERN TERRITORY: Though Greenpoint rooftop bars have long been ceded to the bros (RIP Berry Park) "Australian" bar and restaurant Northern Territory is still a stellar elevated neighborhood hangout, boasting great views of the Manhattan skyline. Show up early (the roof opens at 11 a.m. on weekends) and grab a wooden booth, which comes with an umbrella to shield you from the blinding afternoon sun, should that return someday. The upstairs bar's got a solid selection of beers (including Fosters!), wines, and $12 cocktails, like the tequila-and-red-chili seasoned Spicy Paloma, and you can score small plates and Aussie burgers ($16) at the restaurant downstairs. 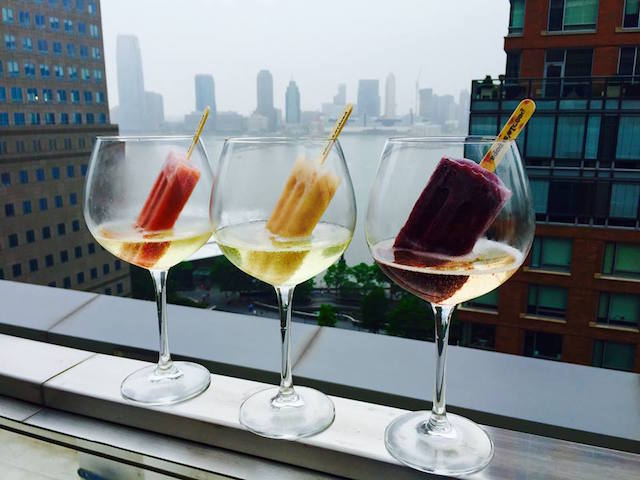 THE LOOPY DOOPY ROOFTOP AT THE CONRAD HOTEL: Half the luxury of going to Loopy Doopy is walking into the Conrad itself. The hotel's lobby is a breathtaking (yes, I was actually breathless) at 15-stories high, hung with 10-story artwork by Sol LeWitt. If this where "the other side" travels on business, maybe I should start dating up. On the 16th floor of the Conrad sits Loopy Doopy, a rooftop bar that feels far more stylish than its name.

Aim to drink here in the mid-afternoon, when this place is truly serene. You'll join airily-clad businesspeople and hotel clientele lounging on the wooden deck, enjoying the breeze coming off the Hudson, and sipping on the bar's signature item: $22 sparkling ice pop cocktails served in fishbowl stemware. They're filled with Prosecco and dunked with an upside down People's Pop. Nights here can get busy and the velvet rope does come out, so show up early before the after-work crowd piles in. (Sam Corbin)

THE ROOF AT PARK SOUTH: The Roof at Park South just reopened for the season, offering up sweeping views of Midtown, the Chrysler building, and your wine glass reflecting the sunset-soaked skyline (a favorite Instagram shot at the spot). This year they're offering some new food and drink, including frozen cocktails by Beverage Director Ted Kilpatrick and some light bites by James Beard award-winning chef Tim Cushman.

Big bonus: If the roof gets too hot or crowded, there are a number of nooks inside where you can feast and/or keep drinking. (Jen Carlson) 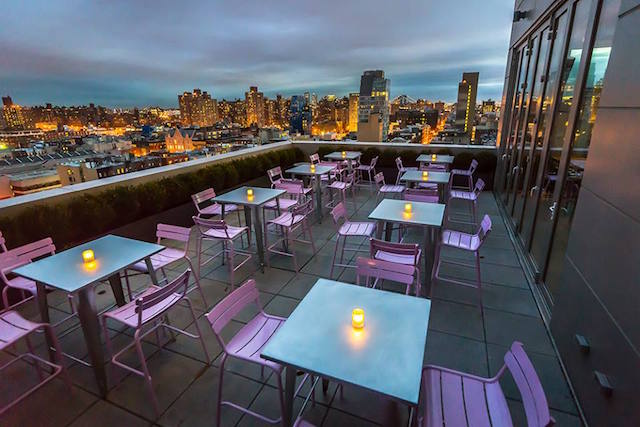 MR. PURPLE: Mr. Purple (which took some flak for its name upon opening) looks like something straight out of a Season 1 episode of GIRLS. The LES rooftop bar perched on top of the Indigo Hotel was designed to resemble an artist's loft, complete with cedar shelving units, Mod furniture and shaggy rugs. The clientele is made up of exactly the kind of folk you'd expect at an artist's loft party, too, nautical blouses, perfectly-draped cardigans and all. But even without all that, Mr. Purple would still feel artsy and HBO-ready, thanks to its sprawling Orchard Street-side lookout. If you're there at sunset, the tops of Manhattan's buildings will catch the light just so, and for one fleeting moment you'll wonder whether it wouldn't be so bad after all to go through life as a walking cliché.

Cocktails are strong ($16, but basically two $8 cocktails' worth strong) and the company is handsome as all hell. Stay until you exchange numbers with someone, which, given the house party vibes and the wide sections of seating, shouldn't be hard to do. (Sam Corbin) 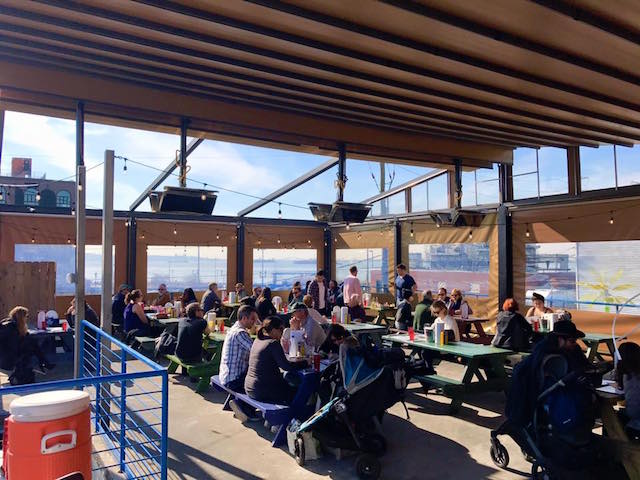 BROOKLYN CRAB: This place is the low-key Disneyland of Greater New York. Wander far enough down Van Brunt Street in Red Hook and take a right on Reed, and the Brooklyn Crab will appear to you just as the desert oases did in the Bible, or like that cactus mirage in Fievel Goes West. Brooklyn Crab is a three-tiered eatery with a front and back lawn. At street level, the bar has low lighting, bar seating only, and a real bait-and-tackle vibe, complete with cornhole on the lawn. On the second floor, it’s a full restaurant with a roadhouse feel.

But it’s the Crab’s no-frills roof deck, replete with picnic benches and umbrellas, that really makes the occasion. With a spectacular lookout over the river (clear to the Statue of Liberty!), homey wood paneling, and picnic benches, it’s exactly where you want to spend an afternoon sucking down a Rum Punch Bowl for Two, which comes topped with Swedish Fish. The bar also boasts a backyard tent with pressed sandwiches and a wraparound mini-golf course—free to play, because this is Valhalla, after all. (Sam Corbin) 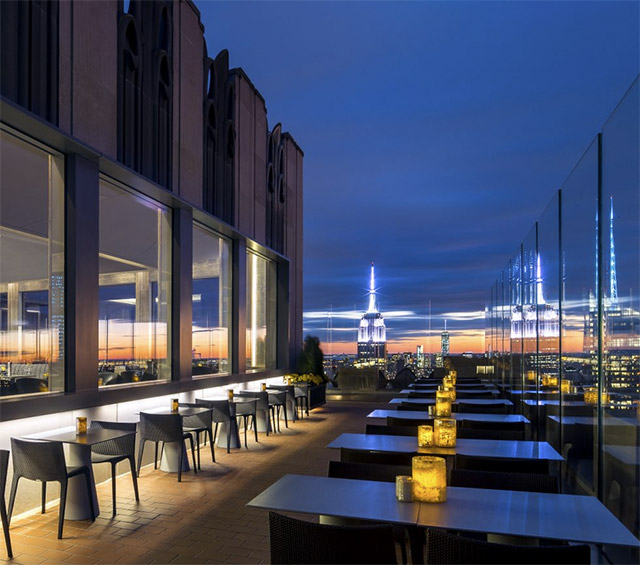 BAR SIXTYFIVE Want a spectacular and spectacularly expensive experience? Head to Bar SixtyFive at the Rainbow Room. This is not your casual, drop-by rooftop—you've got to make reservations, and there's a $65 per person minimum for outdoor seating. Wait, there's more: "Due to the high volume of requests, outdoor seating cannot be guaranteed," and reservations are only held for 15 minutes. There's also this firm warning, "Serving guests 21 and over, with proper attire required, including collared shirts or suit jackets for gentlemen."

Still, you're HIGH up on the 65th floor of 30 Rockefeller Center, with stunning views of Midtown Manhattan, which looks particularly breathtaking at night. The cocktail menu offers classic drinks like 1915 Gin & Tonic (with Dorothy Parker Gin) or modern takes (the Paradis + Perdition includes flamed absinthe and cognac, plus champagne, bitters and smoked cinnamon), so this is definitely a way to splurge.(Jen Chung) 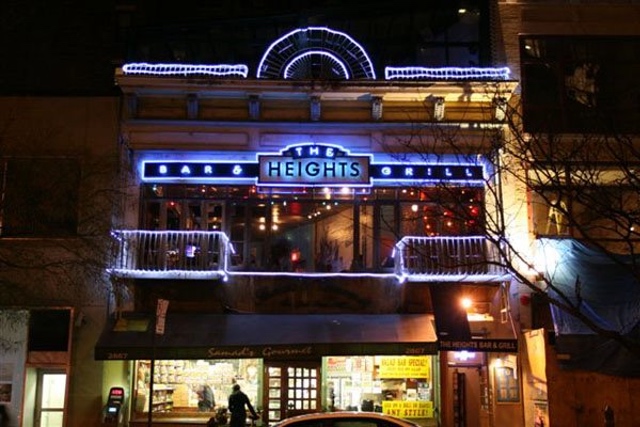 THE HEIGHTS BAR AND GRILL: It's hard to find a rooftop bar north of Midtown, but this Morningside Heights spot boasts outdoor space that's solid in any weather. Though a springtime/summer visit is superior for obviously reasons, the roof is covered and heated in the winter, which is a good deal, considering the Heights' best beverage offering is a frozen margarita. Just note that The Heights is primarily a Columbia University bar, so if you can't stand collegiates who haven't quite figured out alcohol, stay away. 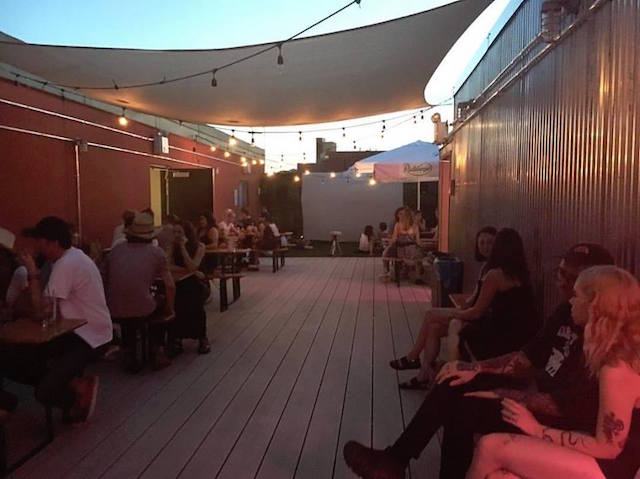 OUR WICKED LADY: How Bushwick got to be the way it is without a rooftop bar to its name is beyond me. But Our Wicked lady stands alone in the neighborhood, a rooftop-equipped bar and event venue thriving at Morgan and Meserole since its opening last year. The only way I can describe this decor of this bar is with the word "Illuminati," so take what you will from that. Their roof is casual and cozy, closed off between fencing and building walls on all sides. That architectural choice makes it more of a cloistered courtyard than a lookout point, but the space is still significant enough to host party crowds and live bands, two things that are forthcoming in the roof's spring/summer season. It's more manageable than some of its brethren in The City, with frozen drinks running you around $8, and most other cocktails $12. If you're a spice fiend, try the El Fantasma: tequila cabeza, montelobos mezcal, ginger, lime and ghost pepper bitters. (Sam Corbin)

Our Wicked Lady is located at 153 Morgan Avenue between Scholes and Meserole Streets in East Williamsburg, Brooklyn (ourwickedlady.com).

#best of gothamist
#best rooftop bars
#rooftop bars
#original
Do you know the scoop? Comment below or Send us a Tip