Man cannot survive on bread alone, they say, but clearly "they" have not dined on some of our city's bakeries' best loaves, which are tasty enough to sustain any New Yorker for decades. There are a lot of wonderful and very famous bakeries in town, and we'd be remiss not to mention places like Balthazar, Eataly, Amy's Bread, Breads Bakery, Maison Kayser, Zabar's, and Orwasher's. But for the sake of this list, we're sticking with some slightly less obvious spots, not that you should avoid any of the aforementioned while on a hunt for your next hunk of sourdough. So, without further ado, here are our favorite bread spots in the city; as always, leave yours in the comments. 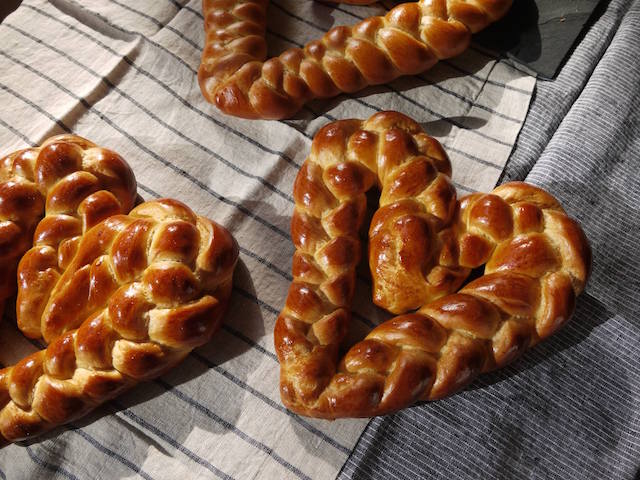 HOT BREAD KITCHEN: HBK has a pretty cool thing going on. The non-profit kitchen works as an incubator, offering (paid!) training to foreign-born and low-income workers who want to learn how to make careers out of baking. After a year, HBK helps trainees find professional baking jobs outside the incubator. The concept in of itself makes HBK's breads worth buying, but the goods themselves are also A++, with plenty of ethnic offerings like challahs, Moroccan m'smen, bialys, tortillas, and Persian nan el barbari, as well as ryes and multigrain loaves. The best breads are sold at HBK's Greenmarket stalls, but if you hit up their storefront at La Marqueta after 3 p.m. you can score pay-as-you-wish loaves from their production bakery before they get tossed out at closing time.

Hot Bread Kitchen has stall locations at Greenmarkets all over the city, as well as a retail storefront at La Marqueta, 1590 Park Avenue between 112th and 115th Streets in East Harlem (212-369-3331, hotbreadkitchen.org). 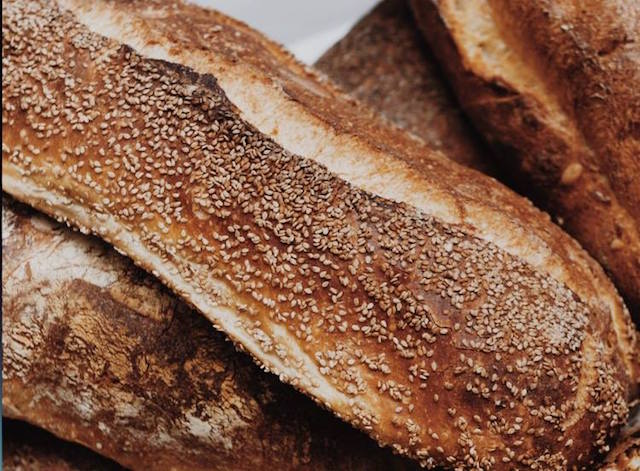 GRANDAISY BAKERY: Grandaisy's handcrafted breads have blessed our fair town since 2006, when Monica Von Thun Calderon, then business manager over at fellow best breadmaker Sullivan Street Bakery, decided to strike out on her own. Grandaisy's "thing" is white Italian breads, with ciabattas, filone, and Italian-style baguettes making up the bulk of the menu here. Grandaisy's breads are fresh and reasonably priced, plus patrons can pick up equally delectable sandwiches, pizzas, desserts and coffee, should the mood strike. Tragically, Grandaisy shuttered its lovely Upper West Side location earlier this year, but the TriBeCa shop is still kicking.

Grandaisy is located at 250 West Broadway between Moore and Beach Streets in TriBeCa (212-334-9435, grandaisybakery.com).

SHE WOLF BAKERY: You can sample She Wolf's breads at the stellar restaurants it supplies—Roman's in Fort Greene, Marlow & Sons in Williamsburg, and Reynard at the Wythe Hotel all serve their loaves, to name a few. But you can, and should, take home She Wolf's famed crispy-crusted, sharp sourdough breads and pizza biancas at Greenmarkets around town. Though She Wolf's loaves were first born in Roman's' ovens, now they're baked in the company's production space in Greenpoint, and run the gamut from the aforementioned sourdoughs (their specialty) to baguettes, to German-style ryes, to brioches.

She Wolf sells loaves at seven Greenmarkets weekly, as well as at several of the restaurants they supply; see their website for details. 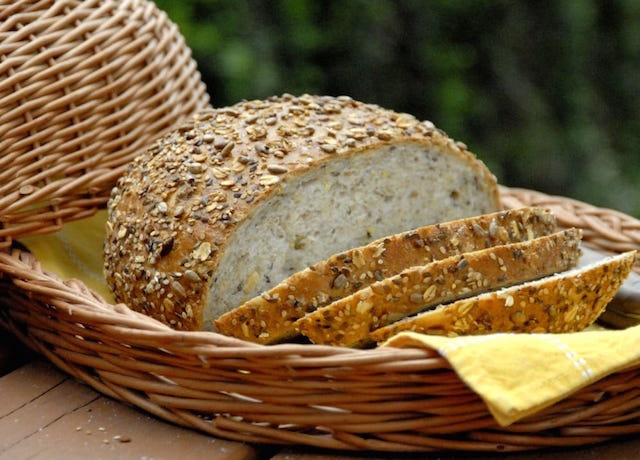 NORTHSIDE BAKERY: Bagels might be New York's bread of choice, but even the best bagel makers can't beat that thick, hearty hunk of Old Country rye dipped in hot soup when the season calls for it. This Polish bakery—my go-to during my brief stint in Williamsburg—does that bread better than anyone else in the neighborhood, baking thick-crusted, cheap loaves of rye, 7-grain, whole wheat and the like. Northside's rolls are also exceptional; try the horseshoe-shaped Rogal Piekarski, a large, salty roll dotted with poppy seeds, or opt for a few cross-imprinted Bulka Bawarska (bavarian rolls).

Northside's also got an appetizing array of pastries, cakes, pickles and pierogi on display, but your best bet here is to stick with the breads. And be sure to make your selections quickly—the employees do not take kindly to dawdling orderers here, and they will not hesitate to snap at you if you take your time at the counter. That lesson was learned the hard way. 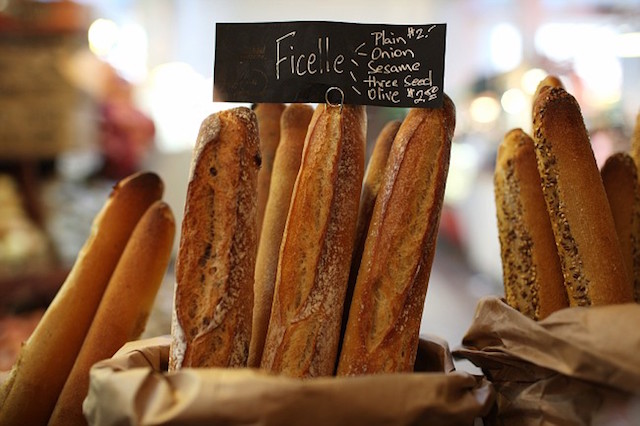 PAIN D'AVIGNON: New Yorkers who frequent Essex Street Market delight in the baguettes and brioches baked by this European boulangerie. Pain D'Avignon is helmed by three old pals from Belgrade, formerly in Yugoslavia, who made it to the States a few decades ago and launched a wholesale bakery out of Long Island City at the start of the aughts. In 2010 they opened their stall at Essex Street Market, and now they hock their well-priced artisan rolls and country loaves at a number of food halls in the city, including the Plaza Food Hall and the new Dekalb Market Hall in Downtown Brooklyn.

Pain D'Avignon sells its breads at a number of food halls in the city, but the best place to get them is at Essex Street Market, 120 Essex Street between Delancey and Rivington Streets on the Lower East Side (212-673-4950, cafedavignon.com). 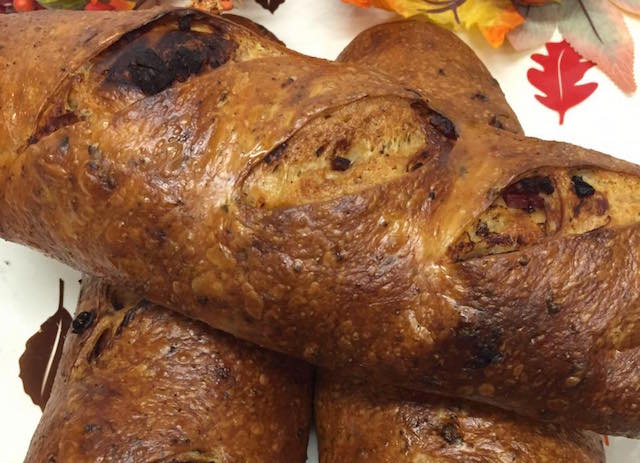 MAZZOLA BAKERY: This Carroll Gardens classic, which has been in the same location since 1928, does many Italian bread and pastry things well, but it's their magnificent Lard Bread that makes Mazzola a true destination bakery. As inherently rich and wonderfully greasy as their name implies, these loaves then reach next-level ecstasy via a hint of provolone in the crust and the deep funk of salami bits baked right in to the soft, welcoming dough. If I lived near this place my arteries would be in serious trouble. (Scott Lynch)

Mazzola Bakery is located at 192 Union Street between Henry and Clinton Streets in Carroll Gardens, Brooklyn (718-643-1719). 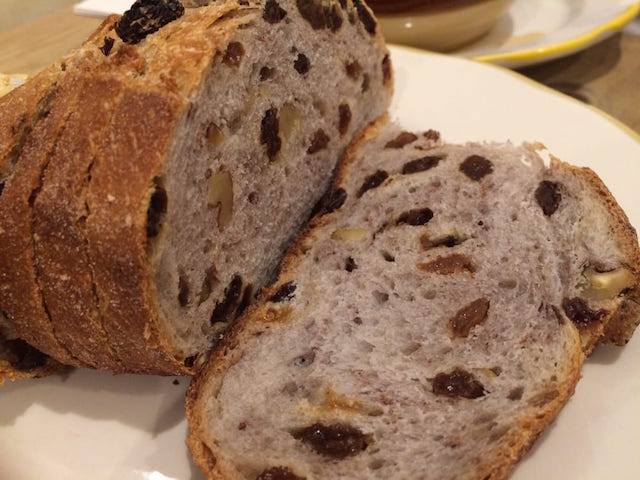 LA BOULANGERIE: Forest Hills bakery La Boulangerie is best known for its rich desserts, but it also serves some of the best baguettes in the borough, boasting crispy crusts and light, airy crumb. Baguettes aside, La Boulangerie also has a solid selection of ryes and other artisan breads, and though prices here are a little high, the baked goods' quality is about what you'd expect in return. 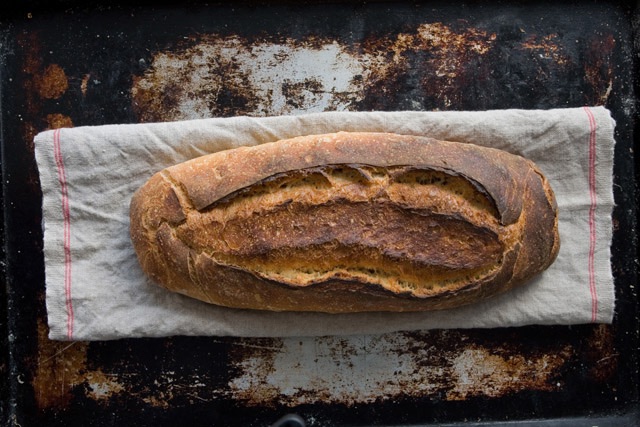 SULLIVAN STREET BAKERY: Sullivan Street Bakery has been the gold standard in breadmaking since 1994, when Jim Lahey opened its first outpost in SoHo. In 2000, Lahey, who has won two James Beard awards, moved that operation up to Hell's Kitchen, and in 2009 he opened a spot in Chelsea, not that the quality of Sullivan Street's crusty, chewy, Italian breads ever wavered in the moves. Highlights include the caramel-tasting Pugliese, the rustic Truccione Sare, the Pizza bianca focaccia bread, and the super-rich Truccio Santi, whose soft crumb comes stuffed with walnuts and raisins. The bakeries also serve sandwiches—made, obviously, with their bread—and other treats for carb-lovers.

Sullivan Street Bakery's Hells Kitchen location is currently closed for renovations, but you can still visit them at 236 9th Avenue between West 24th and 25th Streets in Chelsea (212-929-5900, sullivanstreetbakery.com). 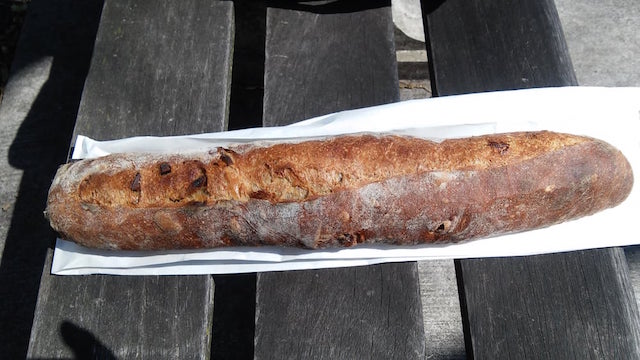 ARCADE: There's been great consensus among my carbo-loading friends that TriBeCa's Arcade bakery is the "best best best," serving up spectacular, fairly cheap sourdough loaves and baguettes in their spectacular Church Street space. Arcade's a hot spot for folks who work in the neighborhood, as it's only open weekdays until 4 p.m., but the breads here are worth taking an extra-long lunch if you're not local, plus they've got killer pastries and croissants for the sweet-toothed. The bad news is, Arcade's closed until September 6th, but expect great things once they're back and kicking. 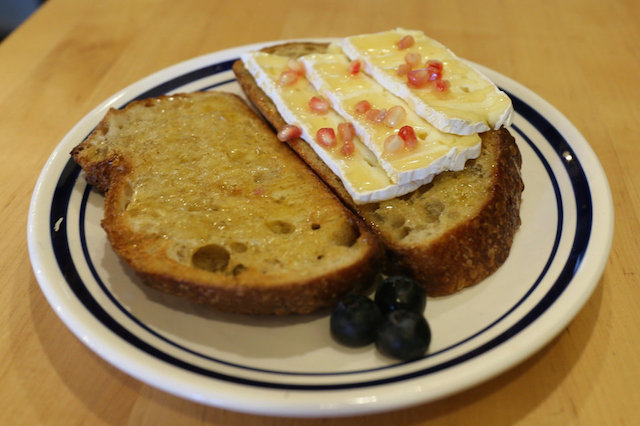 L'IMPRIMERIE: We loved L'imprimerie when it opened in Bushwick in 2015, and the French bakery's still going strong two years later, with owner/baker Gus Reckel serving up buttery baguettes, sourdoughs, and pain aux cereales out of his lovely Myrtle Ave space. L'imprimerie also offers open-faced sandwiches, quiches and other savory bites, plus it has one of the best croissant selections in town.

L'imprimerie is located at 1524 Myrtle Avenue between Linden Street and Gates Avenue in Bushwick, Brooklyn (929-295-6464, limprimerie.nyc). 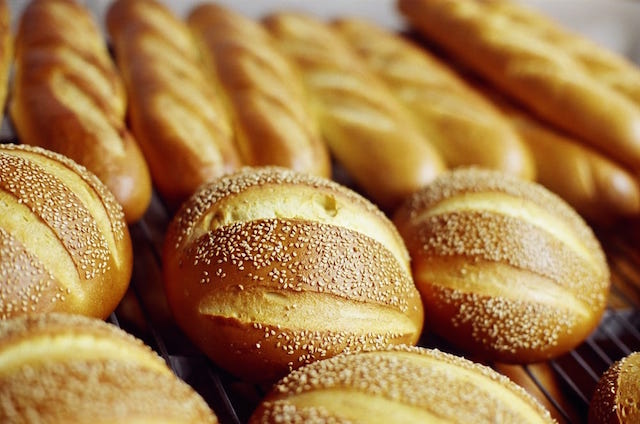 GRIMALDI'S BAKERY: Not to be confused with the famed DUMBO pizza joint, Grimaldi's Bakery in Ridgewood has been serving up Italian baked goods for four generations, with stellar focaccia, crusty baguettes, rolls, semolina loaves and other white-crumbed goodies included in the repertoire. Grimaldi's distributes its wares all over the country, but for the freshest bread you should head to their Menahan Street storefront, where you can also score bagels, pastries and cakes. 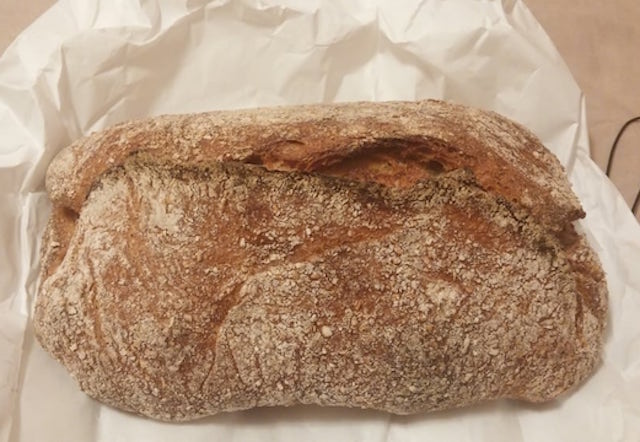 RUNNER & STONE: Gowanus' Runner & Stone serves double-duty as a bakery and farm-to-table restaurant, and if you're dining in here, you'll get to feast on a sampling of their loaves as part of their standard bread basket. But if you're looking to take the bread home with you, you can purchase goods from head baker Peter Endriss, whose impressive breadmaking resume includes a stint as head baker at Per Se. Baguettes, ciabattas, ryes, and the like are on the menu here, and all are outstanding, as well as reasonably priced.

Runner and Stone is located at 285 3rd Avenue between President Street and 4th Avenue in Gowanus, Brooklyn (718-576-3360, runnerandstone.com). 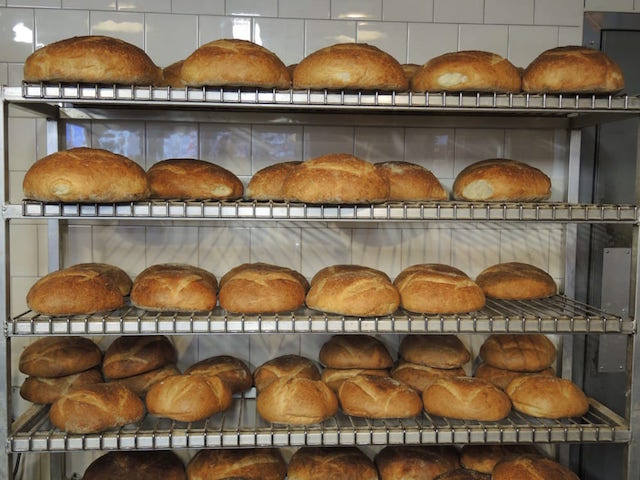 MADONIA BROTHERS BAKERY: Though there's no end to the amazing Italian food you can score on Arthur Avenue, Madonia Brothers is the go-to bread shop in Belmont, boasting a lip-smacking array of Italian baked goods. Focaccias, sourdough loaves, breadsticks, semolinas and lard bread are all of note here, though the best thing on the menu is their olive bread, which is braided, chewy, and packed with olives. The bad news is, Madonia runs out of their more popular options quickly, so it's best to make your way there earlier in the day—it opens at 6 a.m., so, good luck. 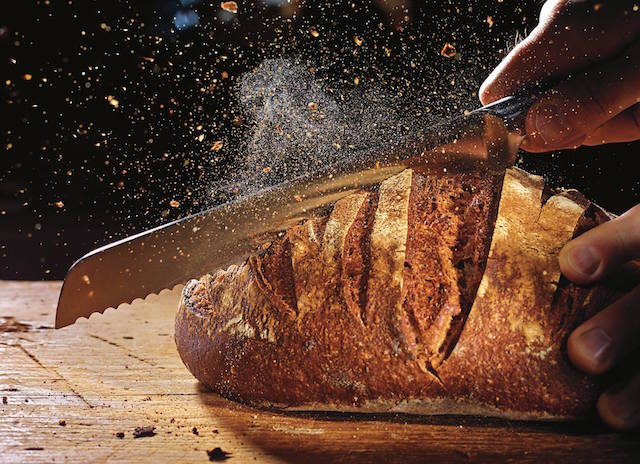 BIEN CUIT: Bien Cuit's James Beard-nominated breads are worth all the accolades, with the miche—extra-fermented sourdough—standing out among the selection. Owners Zach Golper and Kate Wheatcroft have perfected the method here since debuting in 2011, using local ingredients to produce hard-crusted loaves filled with flavorful buttery, flaky crumb. Bien Cuit's baguettes are also outstanding, and at their Smith Street and newer Grand Central cafes, you can order sandwiches and other bread-friendly fare in addition to whole loaves, plus they serve desserts, like any good bakery. Bien Cuit also supplies bread to a number of restaurants and cafes in town, so you can taste their wares with or without journeying to Cobble Hill. 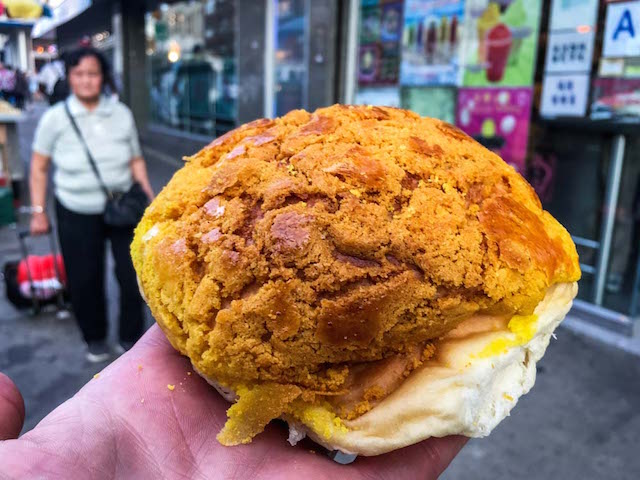 TAI PAN: With bustling locations on Canal near Mott in Manhattan and on Main Street in Flushing, Tai Pan is one of the city's busiest, largest Chinese bakeries which, because of the constant turnover, is excellent news for fans of super-fresh bread. There are lots of varieties here, almost all of them sweet, but the Pineapple Buns are my favorite. They don't actually contain pineapple; they're just called that—literally "bo luo bao" in Mandarin—because the crunchy crosshatching on top resembles the fruit. The pastry-like roll is delicious as-is, and extra-amazing smeared with salted butter as part of a homemade eggs-and-meat breakfast. (Scott Lynch)

#best bread
#best of gothamist
#bread
#original
Do you know the scoop? Comment below or Send us a Tip