The Best New Restaurant Name is in East New York 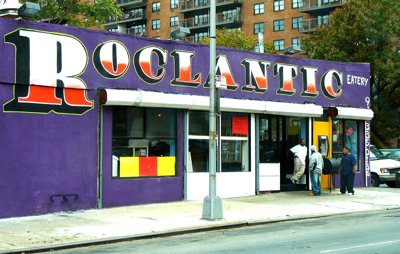 FR.OG and P*Ong, two perfectly good Manhattan restaurants that opened earlier this year, have names that independently invoke two classic arcade video games, Frogger and Pong. Now, as the fall openings season draws to a close and the votes for worst new restaurant name have been cast, we’d like to draw your attention to the most incredibly iconic new restaurant name in New York: It's that of Roclantic Eatery, a soul food and oil drum “Bar-B-Que” place that opened just two weeks ago on the corner of Atlantic and Rockaway Avenue in East New York, coincidentally enough. Kind of rolls off the tongue. With a purple-painted exterior and booming, shadowed, all-caps signage, Roclantic’s owners have come up with a restaurant name so unique that as of right now, it doesn’t even return a single Google hit.

Roclantic is a steam table joint with sauce-slicked and jerk chicken, stewed oxtails, heaps of fried whiting, ribs, and a bunch of sides. Its owners say the menu will change on a frequent basis. Like every other restaurant that attempts to defy the laws of hot buffet thermodynamics, choosing the best possible meal may depend on your ability to spot exactly what hasn’t been sitting out the longest behind the sneeze-guard. This cafeteria-style approach works well for similar places that have gone on to develop a huge following, like Poor Freddie’s Rib Shack, where the lines constantly run out the door. We had a gigantic piece of barbecued chicken, some baked mac and cheese, and collards ($6 for limited time), all of which showed signs of promise. But it was the simple things, the legitimately airy hunk of cornbread and the add-on side of fried cabbage ($1), that stand the chance of putting so many restaurants with funny names and huge check averages to shame.