Pasta is the greatest food on the planet and, like time, heals all wounds and pangs of hunger. Whether it's really a weight-loss tool or not, it is nearly always delicious, and though this town boasts quite a few good bowls of the stuff, some spots stick out more than others.

Though I would be remiss not to sing praises for the spaghetti and basil at Scarpetta, the strozzapreti at Marea, or literally anything on the menu at Del Posto, there is something demoralizing about paying upwards of $30 for a tiny ball of pasta, no matter how delicious it is. So for the sake of this list I'm sticking with some of my favorite more affordable options, with a few more expensive exceptions that I couldn't help but crow about. You can check out our list of fancier pastas here, and as always, leave your favorites in the comments. 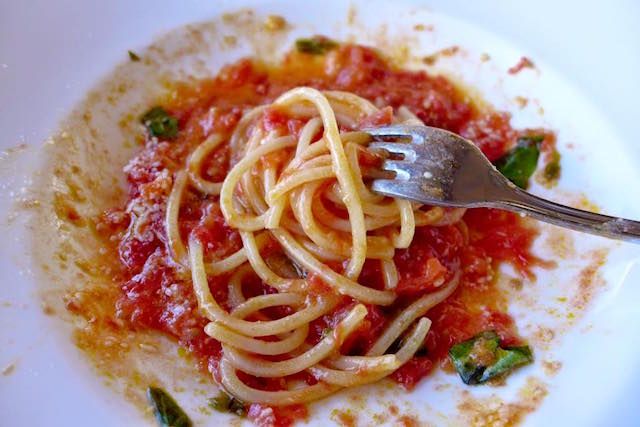 LIL FRANKIE'S: I spent some time deciding between Lil Frankie's and its sister spot, Supper—the latter makes my favorite spaghetti al limone in town, but cash-only Lil Frankie's wins out overall. Like Supper, the spaghetti limone ($15) is a standout, but the butternut squash ravioli special is worth fighting another human to the death over if it's on the menu, and the mezzi rigatoni polpettini ragu ($16) is about equally murderous. Start with a pizza as an appetizer and consider jogging home. 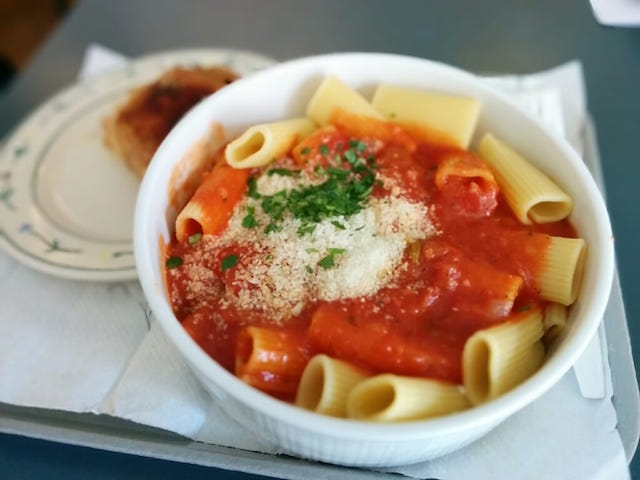 LAMARCAPASTA: This unassuming little Gramercy eatery has been my go-to cheap dinner for the last few years, and though I can't seem to pinpoint exactly what it is that I love about it, I consider it the best deal in town. For $16 you get a hefty bowl of pasta—the creamy tagliatelle ai spinaci is a particular favorite of mine, as is the allegedly "low calorie" linguine sette sapori—along with a big, hot roll and a salad. Though the pasta here might not be up to Marea's standards, it's fresh and flavorful, plus bottles of wine cost like $20. Lamarca is the best place on earth. 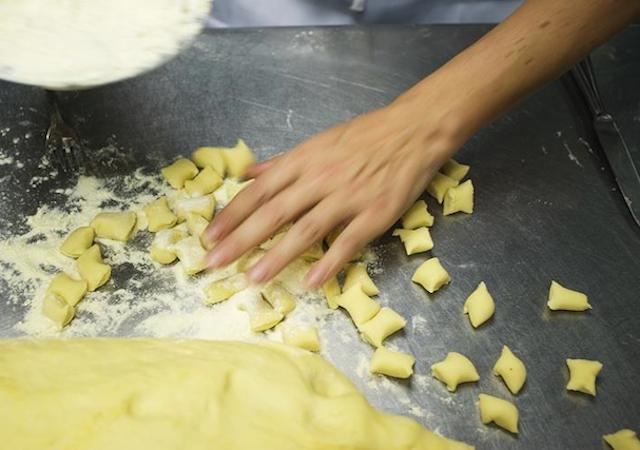 ENOTECA MARIA: The menus here are prepared by a rotating gang of "Nonnas," Italian grandmothers who make their homemade meals with love and pride. Pastas are typically made fresh, and the Nonnas come from all over (Argentina, Algeria, Syria, the Dominican Republic, Poland, Liberia, Nigeria, and of course Italy), providing a mix of Napolitano, Venetian, Sicilian and Central Italian food and flair. Best of all, you get to watch the Nonnas prepare their entrees from behind a glass wall; don't be surprised if they make you dry the dishes while hounding you about bringing home a nice boyfriend. 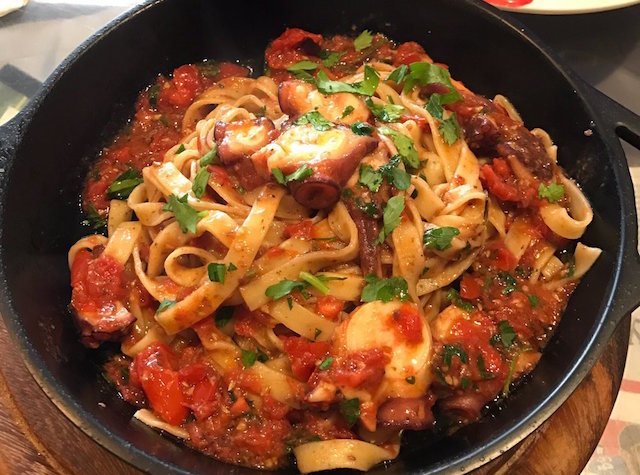 GAIA ITALIAN CAFE: It's easy to miss this tiny basement-level East Houston spot, but don't—while unremarkable from the outside, Gaia Italian Cafe is one hell of a ristorante inside. Order your dish at the counter during lunch, or make a dinner reservation between 5 and 6:30 p.m. on a weekday or 6 p.m. to 9 p.m. on a Saturday. There are no walk-ins for dinner, no exceptions, and the process here is outlined in full on their Information page, which makes me homesick for the semester I spent abroad in Rome. Once you're fully educated, you'll get a revolving selection of cheap, delectable pasta as your reward, all of which is perfectly al dente, specially made each day and priced around $10.

Gaia Italian Cafe is located at 251 East Houston Street between Avenue A and Norfolk Street on the Lower East Side (646-350-3977, gaiaitaliancafe.com). 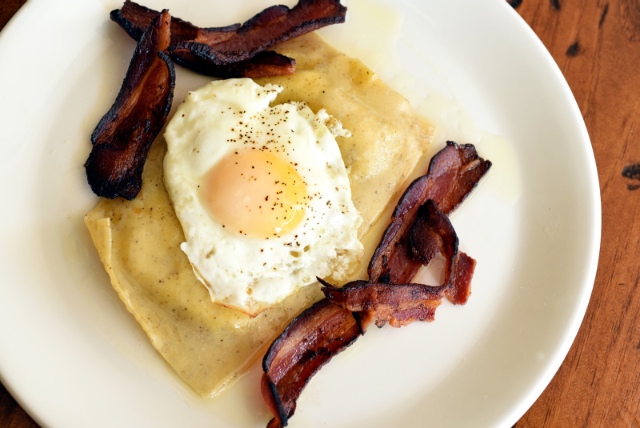 LARINA PASTAFICCIO E VINO: This Fort Greene-based Italian restaurant specializes in handmade, al dente pasta, with some seasonal options (rye bucatini for winter, for instance) and standouts like lasgna verdi ($17), rosemary papardelle ($18) and bucatini alla nerano ($16) on the menu for dinner. But the real treat here is LaRina's brunch menu—though some misguided souls might think pasta's too much for breakfast, from experience I can assure you that pasta is both acceptable and perfect at any hour of the day and night. Brunch dishes include smoked spaghetti carbonara ($15) made with egg and pancetta; bucatini cacio e pepe ($17) and a black pepper raviolone ($15) which comes with bacon and a sunny side-up egg. You'll never eat lame-O Eggs Benedict again.

LaRina is located at 387 Myrtle Avenue between Clermont and Vanderbilt Avenues in Fort Greene, Brooklyn (718-852-0001, larinabk.com).

MANETTA'S RISTORANTE: Family-owned LIC eatery Manetta's has everything.Though they're known for their brick-oven pizza, the pasta dishes here are divine, with standout options including the eggplant-topped rigatoni all'ortolana ($15), the spicy linguine nere with shrimp ($19) and the pappardelle della nonna ($17), which comes tossed in a creamy porcini sauce. They don't skimp on the portions here, and friendly waitstaff makes you feel like you're eating in an old-school red sauce joint from the days of yore. 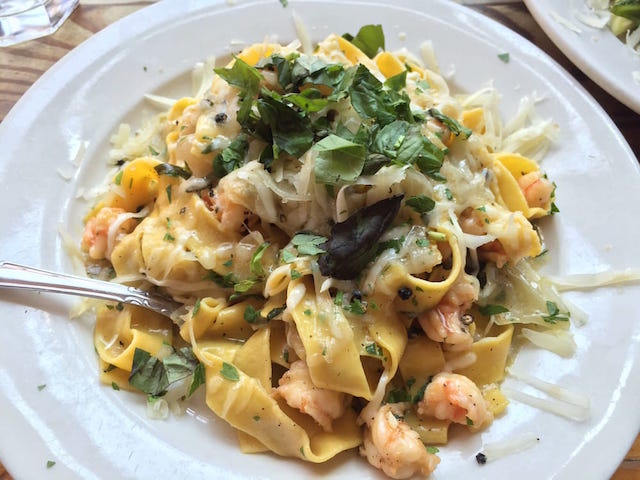 CELESTE: Upper West Side standby Celeste has been serving up perfectly al dente pastas since I was a kid, and though long waits (and their cash-only policy) keep me out of there more often than I'd like, their well-priced pastas—both made in-house and dry—are delightful. The vermicelli alle vongole ($17) is my go-to, but the mozzarella-heavy pennete mo' mo' ($13) is also a treat, as is the tagliatelle al ragu when it's offered as a special. 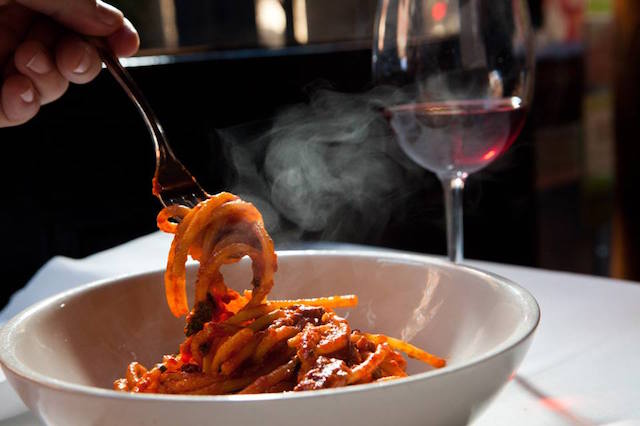 LUPA: I have it on good authority that Greenwich Village eatery Lupa makes the best spaghetti carbonara ($18) in the city, though their bucatini all'amatriciana ($18) is a particular treat, as well. Lupa's been heralded as the poor man's Babbo, though the connotation is more positive than it sounds—a $20 pasta dish at Babbo nets you the world's tiniest portion, whereas Lupa's plates have slightly more heft. And as a bonus, Lupa's olive oil cake is the stuff of dreams.

Lupa is located at 170 Thompson Street between Houston and Bleecker Streets in Greenwich Village (212-982-5089, luparestaurant.com). 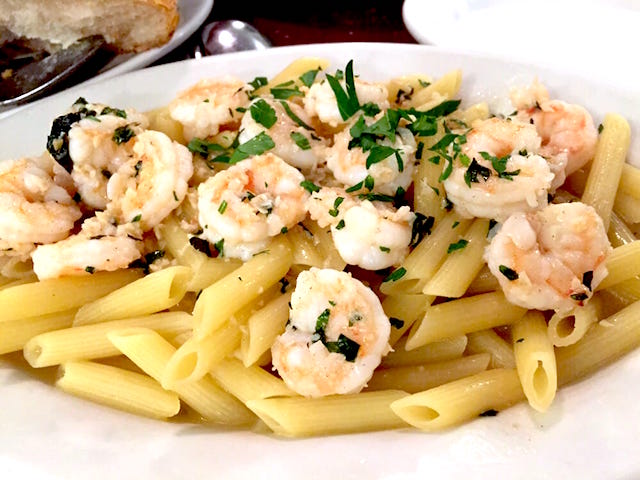 DOMINICK'S: Arthur Avenue has long since eclipsed Little Italy as the neighborhood with the city's best collection of Italian eateries, and Dominick's is no exception. Guests dine at communal tables on classic dishes like linguine with meatballs or sausage ($16); baked ziti ($16) and fettucine alfredo ($16). The fare here isn't fancy but it hits the spot, and be sure to visit Casa della Mozzarella beforehand to stock up on some stellar cheese. 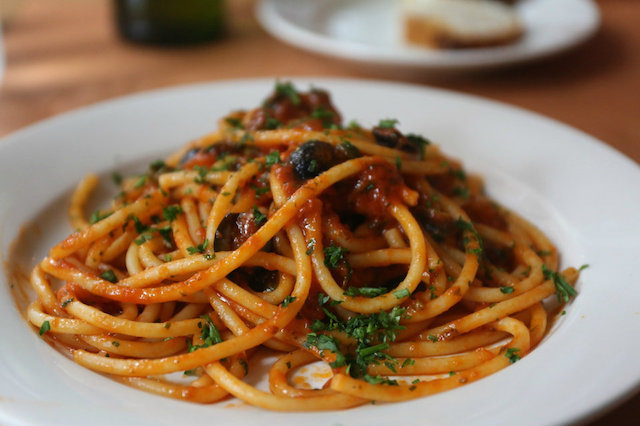 SPAGHETTI INCIDENT: It's hard not to be skeptical of a place that serves spaghetti in a takeaway cup, but the pastas served up at this casual LES spot have been wowing us since it opened in 2015. Highlights here include the super-rich spaghetti carbonara ($14); the guitar-string cut chitarra ($14); and the bucatini amatriciana ($13), which comes with diced bacon in a piquant tomato sauce. Don't sleep on the arancini, either.

Spaghetti Incident is located at 231 Eldridge Street between Houston and Stanton Streets on the Lower East Side (646-896-1446, spaghettiincidentnyc.com). 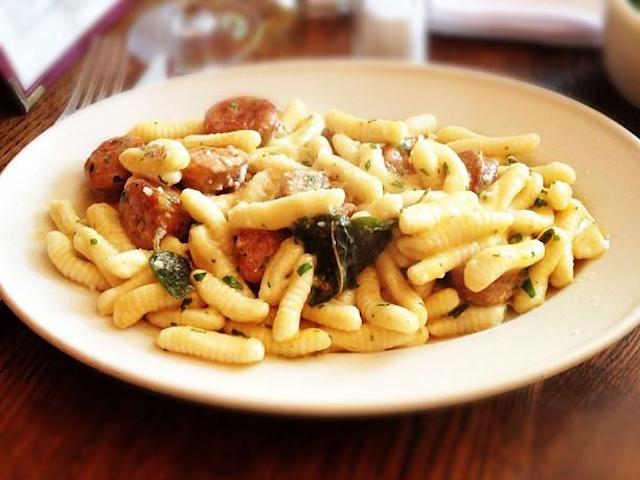 FRANKIE'S 457 SPUNTINO: I want the $21 cavatelli with hot sausage and brown sage butter at Frankie's to be my last meal. The dish comes with al dente bun-shaped pasta simmered in the sweet and savory butter sauce, peppered with thick chunks of spicy sausage from famed Faicco's Pork Store. You may have to wait a long time for it—there's usually a long line, and for good reason. Still, this blessed heart attack in a bowl is well worth it. 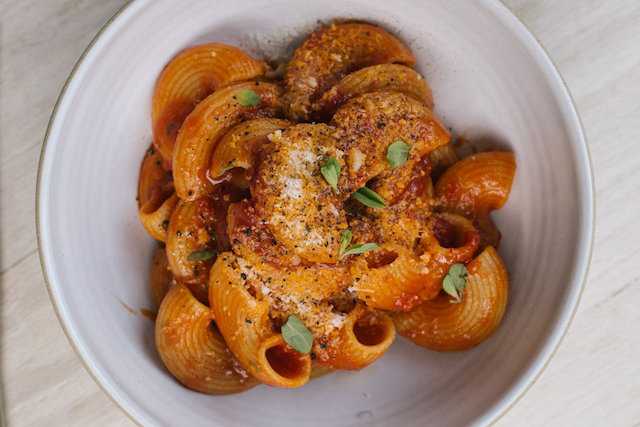 LILIA: Lilia is decidedly pricier than most of the other additions on this list, but it is so extremely good it deserves your splurge. Helmed by Chef Missy Robbins of A Voce and Spiaggia fame, handmade pastas here come doused in a collection of unique sauces, with highlights including the fiery rigatoni diavola, the sheep's milk cheese filled agnolotti, and malfaldi with pink peppercorns. Pastas here are priced around $18 to $22, but the dishes are small and it's best to order a few for the table, along with antipasti like cacio e pepe fritelle and grilled eggplant with ricotta salata. Note that if you want to eat here, you might have to book a reservation at least a month in advance for a decent hour. 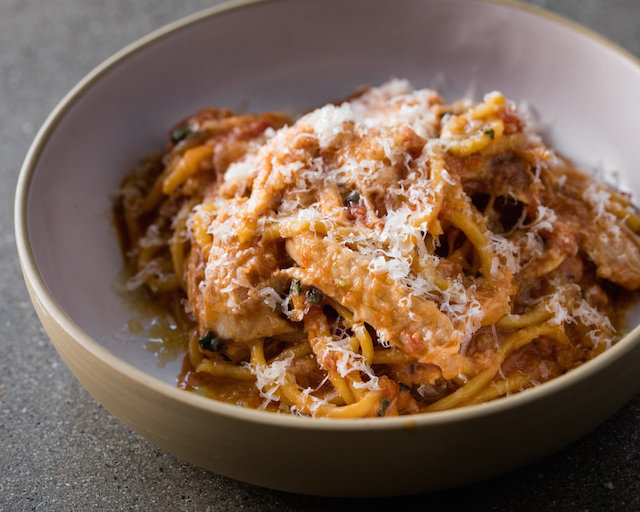 BARANO: Staten Island-born chef Albert Di Meglio's restaurant opened in 2016 with a unique pizza-serving method, but the chefs pastas spring to mind when I'm in need of an indulgent bowl of creative comfort food. The relationship began with the Saffron Gigli ($16), a deceptively simple dish of bright yellow pasta doused in a Calabrian honey with pecorino cheese and black pepper. Then my affections turned to the Peeky Toe Crab Spaghetti ($18), a luxurious tangle of noodles nestled in a lobster broth and topped with crunchy lemon bread crumbs. Now I can't get the Green Garlic Lumache—tossed with a spicy goat ragu, gochujang, breadcrumbs and cheese—out of my head. And don't sleep on the restaurant's house-made mozzarella, either, especially the variety that arrives with a dramatic puff of smoke. (Nell Casey)