When suffering through hangovers in college, I would sometimes manage to lift my eyelids before the sun set, make it out of my bed, and get into a chair at my friend's family restaurant in Providence, Rhode Island: Louis. Once there, someone in the Gianfrancesco family would cook me up the largest, most perfect egg and cheese sandwich*, served on a 6" or 12" roll (possibly with home fries on top). Greasy spoon diner food—ideally served alongside a hot cup of coffee in one of those thick, nondescript white mugs—sates hangover cravings like nothing else can. But since I can't walk to Providence from here, I've been forced to seek out other culinary cures. Below, in honor of the biggest hangover day of the year—New Year's Day—is a tested and fine-tuned list from our editors on where to get the best hangover dishes in New York City—keep in mind this is NOT BRUNCH, but rather a quick, easy pick-me-up in a place where you'll find little to no judgement. 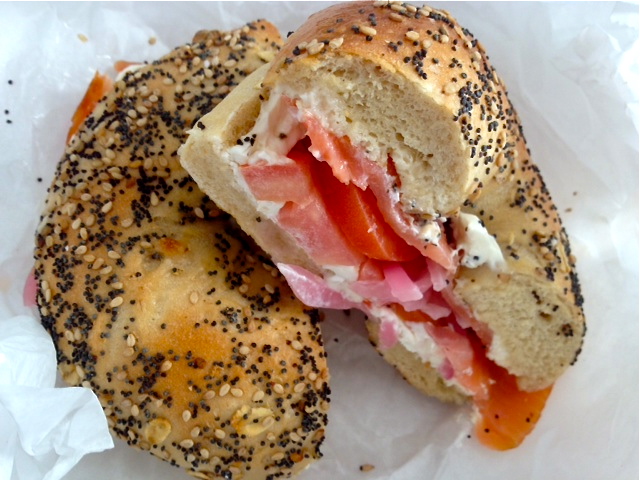 THE LES BAGEL: Many a walk of shame originates on the Lower East Side, but you can quickly turn onlookers' gazes from scorn to jealousy by picking up an everything bagel with lox and the works from Atlas Cafe on Clinton Street. The lox is from Russ & Daughters and the bagel is H&H (yes, somehow they keep getting them) and the nourishment is unparalleled. Pickled onions will banish any hint of stale Jameson on your breath, while the chewy, noble everything bagel reupholsters your booze-ravaged gut like nonjudgmental HGTV host. And tomato is a fruit! The staff at Atlas is friendly and fast—they can practically hear the pounding in your head. One of these babies and a large cup of coffee is under $10. Considering that this combo will give you the strength to take the subway home instead of a taxi, it pays for itself. — Chris Robbins 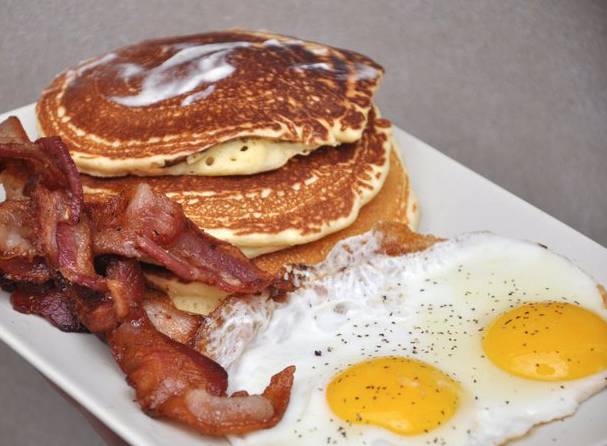 THE MIDTOWN LUMBERJACK: The Eggs Travaganza food cart in Midtown has a strong following. Why? They'll serve you up a steak and egg taco for just 4 bucks, but they'll also conquer your appetite with something a little more healthy (an egg white sandwich, a veggie and protein wrap... whatever you want). But when you're hungover you probably crave something a little more gut-busting. For that, order up The Lumberjack: homemade pancakes, two eggs any style, served with bacon, ham or sausage. Not your style? Here's a mouthwatering gallery of images to whet your appetite.— Jen Carlson 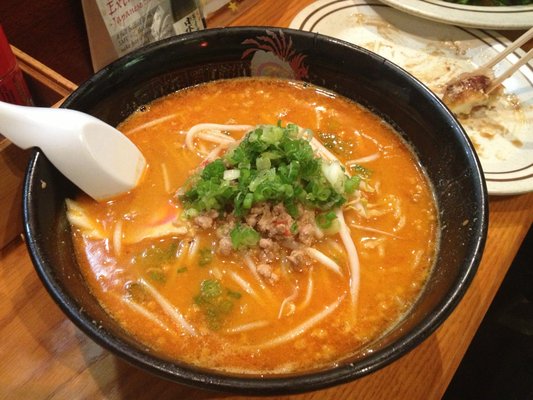 The Tantan Ramen (via Yelp)

THE UES RAMEN: Whenever we've taken in one too many Natty Lights we crave a steaming bowl of fatty noodles in broth to soothe our rumbling stomach. The tiny Upper East Side ramen bar Naruto Ramen doesn't provide much in the way of looks, but their enormous bowls of soup pack a serious gut-busting punch that will knock out a hangover in minutes. We're partial to the Tantan Ramen, a rich, spicy broth flavored with sesame sauce and served with a fish cake, beansprouts, scallions and fatty bits of minced pork. You'll need a post-slurping nap but you probably needed one anyway. — Nell Casey 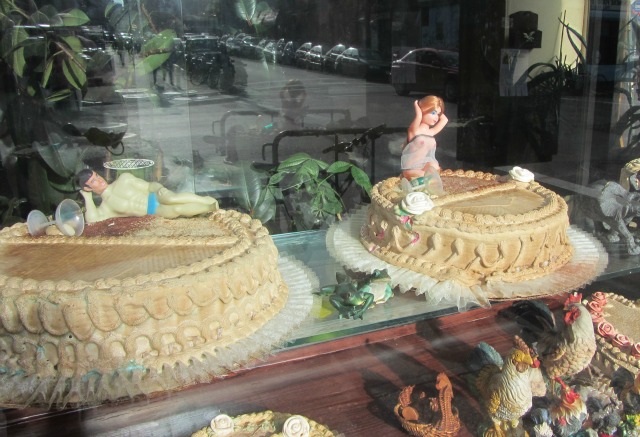 THE WILLIAMSBURG EGG SANDWICH: To awaken hungover in Williamsburg is to awaken surrounded by dangerous brunch landmines. Oh, there are plenty of options, but few can give you what you need: something substantial in your belly NOW NOW NOW. For those crippling hangovers that leave you one misstep away from a homicidal rampage, a 45 minute wait for brunch isn't going to cut it, and even facing the chaotic clusterfuck of The Bagel Shop will probably end with your appearance on the nightly news.

Fortunately, there is La Villita, which, as you can see from the photo, is the kind of weird hole-in-the-wall joint you might walk by a thousand times without a second thought. But the creepy window displays ward off the trendy throngs, and that's only part of the appeal. In addition to a tempting array of pastries and sweets, the friendly ladies at La Villita make a blissfully perfect egg sandwich. They grill the French roll a little bit so it's warm and soft, and make the sandwiches with whatever extras you want, from bacon to sauteed onions to Swiss cheese to salsa verde. Even after ordering a cup of coffee with warm milk, you're sated for less than $5, and there are a couple little tables in the front where you can administer immediate hangover relief. — John Del Signore

*THE LOUIS IN YOUR KITCHEN: Can't fathom the idea of leaving your apartment? Anna Gianfrancesco, who would sometimes get behind the grill at the aforementioned Louis to make their egg n' cheese masterpiece for me personally, tells us the secret behind it. "The secret is splitting the roll down the center and buttering the whole thing beforehand, then grill it until it's a little crispy. Add the cooked eggs and cheese (a good amount of cheese) on top. It's honestly still may favorite sandwich there." She noted that you can feel free to improvise by adding sausage, potatoes, Bytox... whatever!

#atlas cafe
#best of
#best of gothamist
#eggs travaganza
#gothamist best of
#Gothamist Best Of 2012
#hangover food
#la villita
#naruto ramen
#salt & fat
#original
Do you know the scoop? Comment below or Send us a Tip