The Best Fried Food In NYC

After eating piles of fried food for dinner nearly every night for the past several weeks I can state with authority that it is patently NOT true that "anything fried is good." Lots of crap out there, folks! Fortunately, there are also plenty of talented cooks who understand and care about things like clean oil, proper cooking times, careful seasoning, and the balance between batter and item being battered. For this Best Of undertaking I didn't include fried favorites such as chicken, potatoes, and doughnuts, because they have their own lists, but pretty much everything else was fair game. And while NYC will likely never match the deep-fried audacity of, say, the Minnesota State Fair, there are certainly some good-tasting things coming out of the hot oil around town these days. 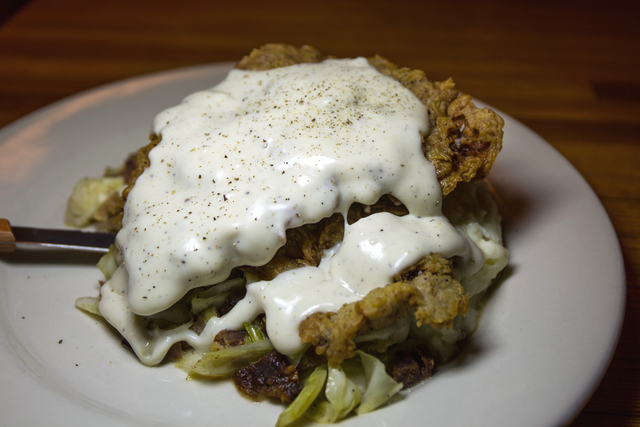 Country Fried Steak at Brooklyn Star ($18)
The Brooklyn Star is that rare NYC beast: the underrated restaurant. From its low-key friendly staff to its reasonably-priced menu filled with rich, Southern-style winners, BK Star has never failed to make me happy. And on any given night the best thing coming out of chef Joaquin Baca's kitchen is the gloriously decadent Country Fried Steak. Not only does he allow the big, thinly-cut slab of beef to maintain its meaty presence under the crackling-fried batter, but the pairing with thick mashed potatoes, chewy bits of bacon, tangy hot slaw, and creamy white sauce makes this as satisfying a plate of food as you're likely to encounter anywhere in town.

The Brooklyn Star is located in Williamsburg at 593 Lorimer Street, at the corner of Conselyea Street (718-599-9899; thebrooklynstar.com) 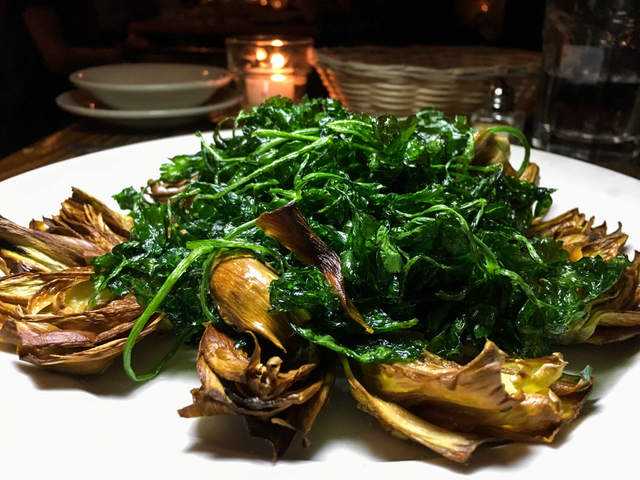 Carciofi Fritti at Celeste ($14)
For years, the fried artichoke appetizer was my (and everyone else's) must-order at Bianca on Bleecker. Tragically, Bianca is gone, but sister-restaurant Celeste is still going strong up on Amsterdam Avenue, serving the same sort of good pasta dishes, superb soups and, yes, an excellent Carciofi Fritti. The key ingredients here, the things that take this dish into truly addictive territory, are the crisp-fried strands of parsley that cover the meaty florets. The kitchen at Celeste doesn't salt their stuff as aggressively as they did down at Bianca, but there's a little shaker right there on your table. Use with impunity. 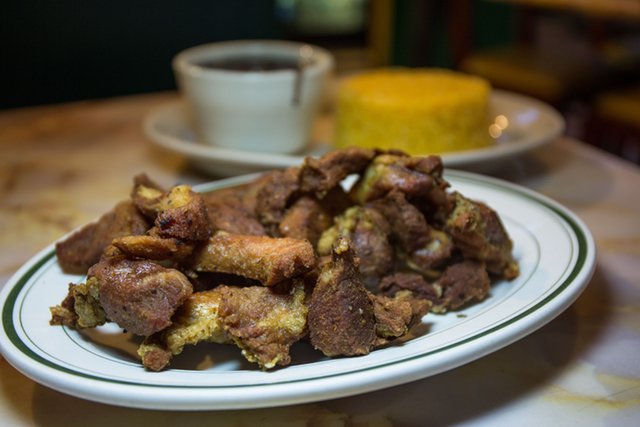 Masita Frita de Cerdo at El Gran Castillo de Jagua ($9.50)
There are scores of fantastic family-run Dominican, Cuban, and Puerto Rican spots located all over the city, but here's one to put near the top of your list if it's not there already: the 40-plus-year-old El Gran Castillo de Jagua, recently resurrected on Flatbush Avenue after a brush with death thanks to Barclays Center over-development. Stick to the Dominican dishes and you can't go wrong, but the best thing that I've had here also happens to be the most deep-fried, the Masita Frita de Cerdo, aka "huge pile of pig chunks." There are fatty pieces exploding with sweet greasiness; there are chewy pieces delivering intense porky flavor. Pour on the Trappey's Red Devil and dive right in. 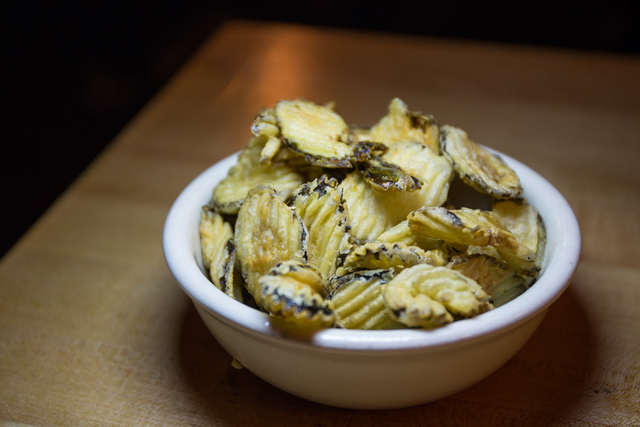 Fried Pickles at Whitman's ($6)
You go to Whitman's in the East Village for good burgers (the Juicy Lucy is a crowd-pleaser, but the one topped with peanut butter is the stealth winner) and friendly vibes, but whatever you order, you should also always order a side of their Fried Pickles. These thin-sliced, perfectly-battered beauties totally nail the correct crispy/juicy ratio, with the acid of the pickles just peeking through all the salt and seasonings. If more places did these as well as Whitman's, Big Fry would be in trouble.

Fried Haddock at A Salt and Battery ($13 for 8-ounce large)
Among the most iconic of all fried-food staples, the classic Fish n' Chips is surprisingly rare in most parts of the city. Sure, fancier gastropubs generally offer a "take" on the dish, but that's what makes Greenwich Avenue's no-nonsense A Salt and Battery such a treasure. The atmosphere is determinedly "generic slice joint," and the fries are pretty mediocre, but the fish—and my order is always the richer, brinier haddock, rather than the more lifeless cod—is fantastic, with a craggy, crackling crust protecting the meaty, steaming swimmer inside. God save the chippy! 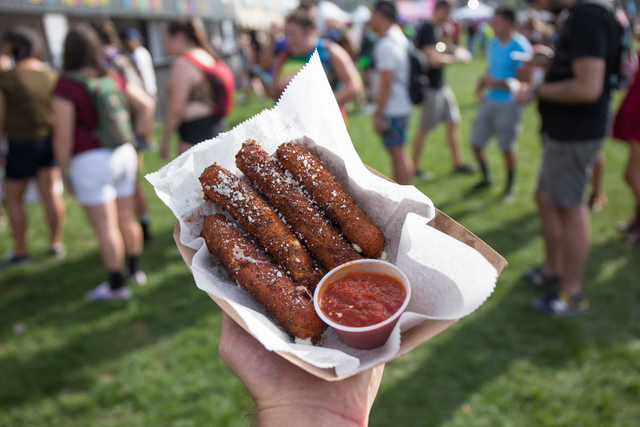 Mozz Sticks at Big Mozz ($10)
This is pure magic, how the Big Mozz boys pull off their thickly-coated cheese sticks time and time again. The coating here is heavy (and heavily-seasoned) enough to be like a sort of exotic bread, but somehow the hearty exterior doesn't overwhelm the superb handmade mozzarella—creamy, salty, tangy, gooey—lurking within. Fried food perfection. The one downside is their limited availability: weekends at the Smorgasburgs, the odd music festival or event. For now! Proprietor Matt Galira wrote to me recently that 2017 is going to be a "big, big year" for Mozz Sticks, and I am definitely staying tuned for that.

The Big Mozz booth is located at both the Williamsburg and Prospect Park Smorgasburgs, which usually open in early April. Follow them on Instagram for special events (bigmozz.com) 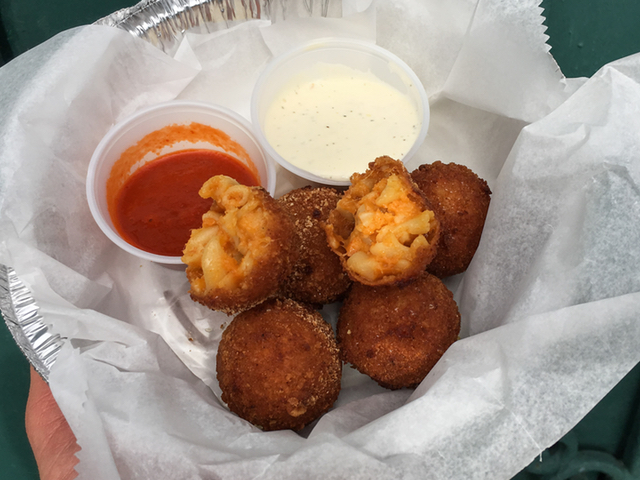 Atomic Fire Balls at Queens Comfort ($8)
Deep fried mac n' cheese bites seem like they would be the slam dunk of the fast-casual restaurant world, and yet the vast majority of places that I've had this dish get it so flavorlessly wrong. Not Queens Comfort! The always-a-party spot in Astoria serves their Atomic Fire Balls at brunch, lunch, and dinner, and they will most certainly get your attention. The crunchy coating contains two bites worth of chewy, sharp, and lively mac n' cheese, and the dipping sauces of Sriracha and ranch let you mix-and-match your flavor palate at will. This is just in a whole different league than most. 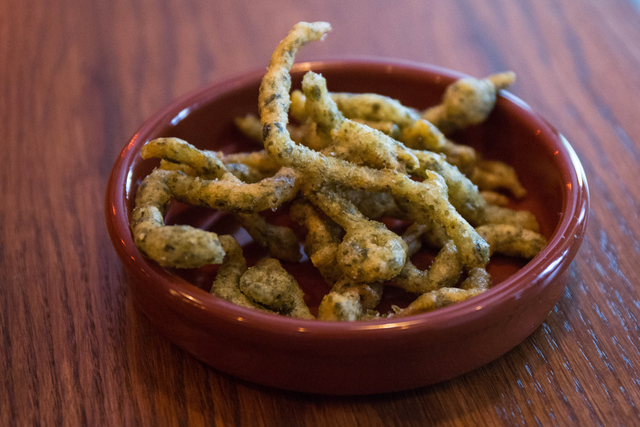 Sourdough Seaweed Puffs at Sunken Hundred (Free)
While you're perusing the focused, fishy menu at Sunken Hundred, a unique and quite good Welsh restaurant on Smith Street, your server brings over a complimentary bowl of these gnarled bits of seaweed-infused sourdough bread, and suddenly, for a moment at least, all is right with the world. I've enjoyed everything I've ever eaten at Sunken Hundred, but it's these "seaweed cheetos" that I think about most often.

Sunken Hundred is located in Clinton Hill at 276 Smith Street between Sackett and DeGraw (718-722-1069; sunkenhundrednyc.com) 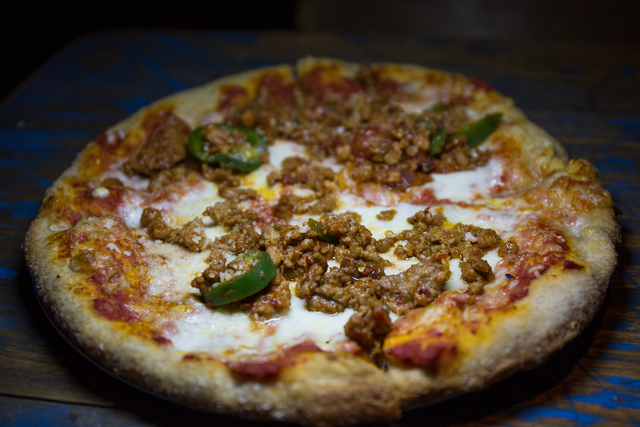 Fried Pizza at Adelina's (Spicy Sausage $16)
Fried pizza has never really caught on in these parts, which is no surprise, really, when you have so much excellent regular pizza from which to choose. But if you're curious about this concoction (called the montanera, by the way, and originally from Italy), or just want an exceptionally pleasant place to eat a meal, Adelina's in Greenpoint is your move. Only the crust is fried, not the whole pie, and it's chewier and more crackly than what you're used to, but get it topped with cheese and spicy sausage as I always do and you'll be wholly satisfied. 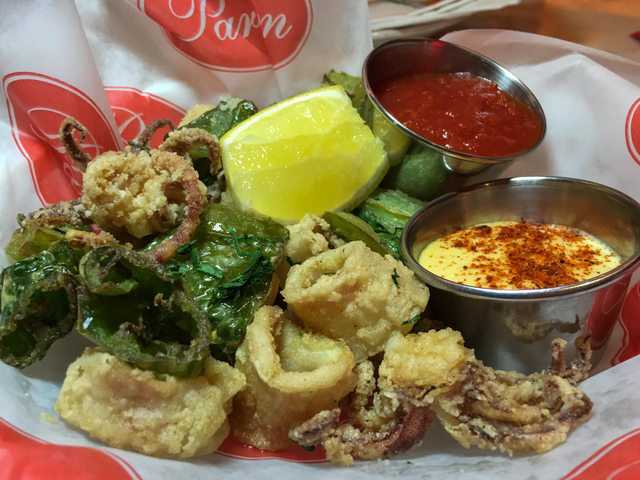 Calamari with Long Hot Peppers at Parm ($16)
I really wanted to find a better basket of calamari than the one they serve at Parm, which used to be the Major Food Group's (Carbone, Sadelle's, the upcoming Four Seasons) genuinely cheap restaurant but these days is more like its relatively cheap restaurant. Seriously guys: $16 for the Calamari now, and the portion size is about half of what it used to be? Oh well. I guess this'll be a special occasion dish for me, because like most of their other outrageously-priced food, it's also really, really good: light, crispy, tender, tasting of the sea. Bonus points for the perfect accompaniment, those spicy fried long peppers.

Parm is located in Williamsburg, the Upper West Side, Battery Park City, and Nolita (parmnyc.com) 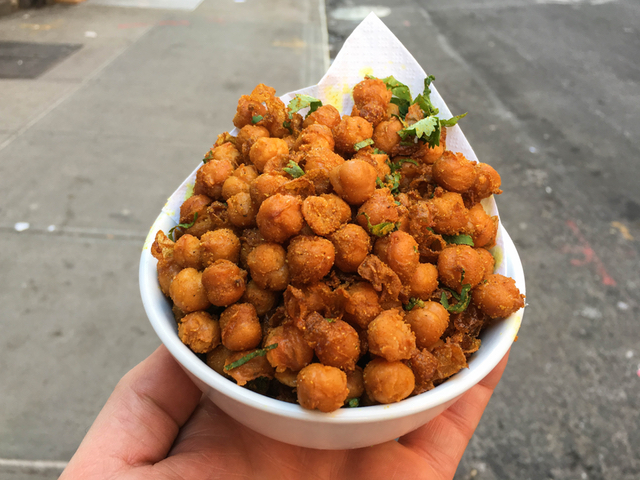 Spicy Fried Chickpeas at Mother's Ruin ($6)
Mother's Ruin is a loud, always-packed bar in the heart of Nolita—which is either good or bad news depending on how you feel about being around lots of beautiful people getting drunk—that consistently serves first-rate food. The Spicy Fried Chickpeas, for instance, is like a master class in constructing a cheap, interesting, addictive bar snack. The legumes are crisp and airy and fun to bite, the cayenne adds fire, the garam masala gives them a touch of the exotic, and the abundance of salt makes you want to drink more and more and more. And it's a huge serving, so you'll be popping these suckers into your mouth for a while.

Mother's Ruin is located in Nolita at 18 Spring Street between Mott and Elizabeth (212-219-0942; mothersruinnyc.com) 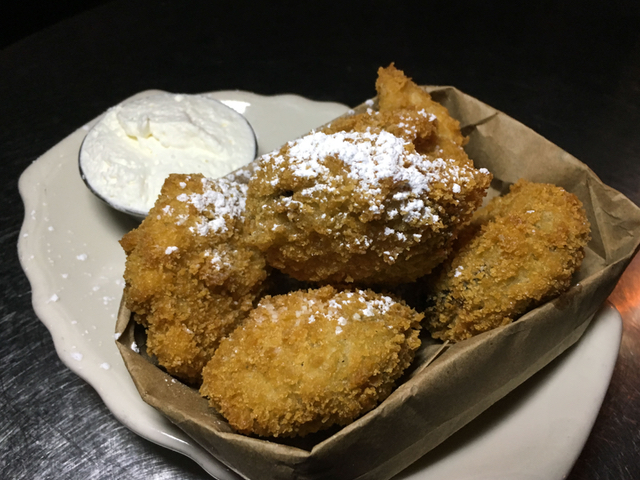 Deep Fried Oreos at Jacob's Pickles ($7)
Deep fried sweets just isn't something NYC restaurants seem to have a good handle on. Take Deep Fried Oreos, which you would think would be be a go-to dessert at any number of fast-casual or family-friendly spots, but good examples are actually difficult to find. After extensive research into the category, the best I've eaten are at Jacob's Pickles on the Upper West Side, the only ones, really, to achieve the correct balance among batter, sweetness, crunch, and cookie. The requisite dusting of confectioner's sugar and a bit of whipped cream for dipping complete the shareable and happy way to end a meal.

#best of gothamist
#fried food
#original
Do you know the scoop? Comment below or Send us a Tip