The Best Candy Shops In NYC

Halloween is just around the corner, and we've got candy on the brain. Though a Duane Reade bag of miniatures will kill a craving in a pinch, nothing beats a real candy store, complete with loose candy gummies, fancy chocolates, and decor as colorful as its wares. Even with sugar becoming a pariah in this town, you've still got a fair share of unique candy shops to choose from. Here are our favorites; leave yours in the comments, and please remember that Dylan's Candy Bar is for tourists. 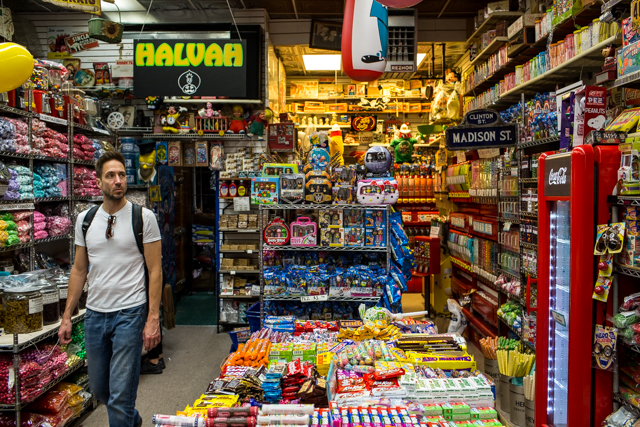 ECONOMY CANDY: This 80-year-old LES standby is the be-all, end-all of candy shops, boasting every possible piece of sugary goodness under the sun. The family-run shop first opened in 1937 in hopes of selling sweets to down-on-their-luck Depression-era New Yorkers. Now, third-generation owner Mitchell Cohen stocks his shop with classic, vintage, international, novelty and contemporary candies, offering everything from Mary Janes and peanut chews to halvah to Turkish delights to Pez. The store is literally stuffed with candy—colorful packets of the stuff line the space floor-to-ceiling, making even a brief visit trigger a toothache. You can also buy candy, chocolate, and M&Ms by the pound, and they sell comic books if you're really looking to turn back the clock to your youth.

Economy Candy is located at 108 Rivington Street between Ludlow and Essex Streets on the Lower East Side (212-254-1531, economycandy.com). 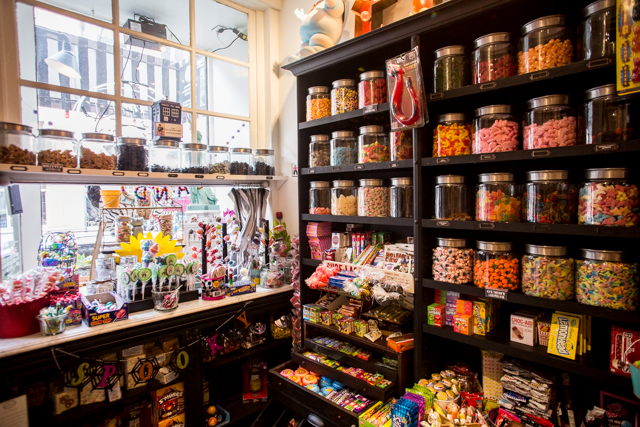 THE SWEET SHOP: This cute little Upper East Side spot, which opened in 2014, is probably best known for its ice cream, but the retro candy sold here is just as top shelf-worthy. Loose candy like Jordan almonds, gumballs, nonpareils and gummy worms are displayed in vintage-style jars alongside tempting boxes of Chuckles, Lemonheads, and giant gummy snakes, plus they sell a wide variety of chocolate bars, licorices, gums, and lollipops. And though you'll be able to find most of your favorites here, if you're craving something specific that's not on display, owners Kelly and Glyn Jaime will order it just for you. Best of all, they've got doughnuts. 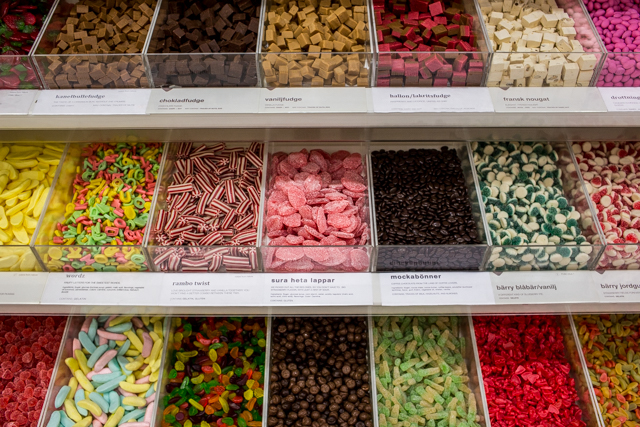 SOCKERBIT SWEET & SWEDISH: Sockerbit is the most aesthetically striking of the shops on this list. The West Village store boasts a colorful array of Scandinavian candies arranged neatly in its pristine white-walled-and-floored space. It's a bit like walking into a Wonkavision studio, except in this case, you don't have to wait for the chocolate to teleport. The shop is designed after its namesake candy, a teeny little sugar cube-shaped marshmallow, which you can purchase here along with dozens of other Swedish treats, like licorices, hard candies, sour gummies and chocolates. Loose candy here runs about $13-a-pound, so you'll have to do your best to reign in your sweet tooth, lest you walk out with $50 worth of sugary goodness. Still, the quality does match the price point. 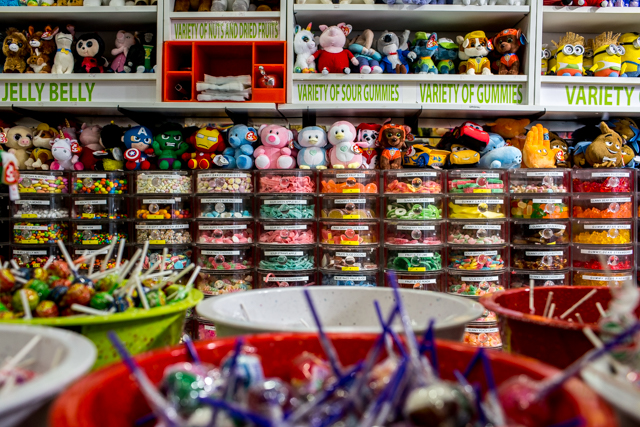 YOGURT AND CANDY WORLD: When I was a kid I wasn't allowed to eat junk food, but on very special occasions my mother would buy us a bag of candy by the pound from one of the city's then-omnipresent World of Nuts & Ice Cream outposts. Yogurt & Candy World (formerly Heavenly Delights) on the Upper East Side is one of the few remaining candy joints of this kind, and while it's probably not the BEST sweet shop in the city—wares here can be stale, for instance, and the space itself is lacking—for nostalgic reasons, I'm sticking it on this list. Stop by for super-cheap bags of gummy coke bottles and cherries, sour peaches, nonpareils and chocolate-covered pretzels, and feel free to mimic my past self by pigging out and then vomiting outside Bloomingdales.

PHILIP'S CANDY: Philip's founder John Dorman sold his candy out of a stand in Coney Island for over half a century, but he closed up shop in 2001 and relocated on Staten Island the following year. The new incarnation still sells the same cheap, tasty candy, with everything from loose gummies to cashew marshmallow balls to chocolate-covered Oreos. Philip's also offers classic soda fountain drinks, like lime Rickeys and their highly-recommended egg creams, should you have a hankering for a taste of old New York. 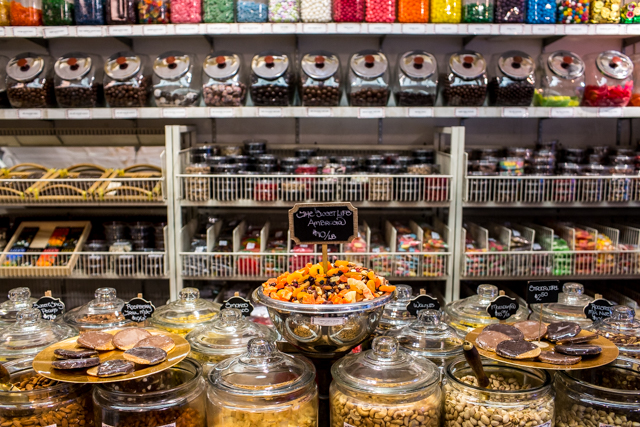 THE SWEET LIFE: This LES spot has been holding strong since 1982, and now it's one of the premiere sweet shops in the city, serving up stellar chocolates, gummies, dried fruits and fudge, to name a few treats on tap. The store itself is appropriately old-timey, with shelves, racks and counters stocked to the brim with jars and boxes full of sweets. Though it's not as all-encompassing as Economy Candy, it's also not as popular with tourists, making browsing here a far less stressful experience, plus you can pick up baking chocolate and other cooking accoutrements if you prefer handcrafting your treats.

The Sweet Life is located at 63 Hester Street between Essex and Ludlow Streets on the Lower East Side (212-598-0092, thesweetlifenyc.com). 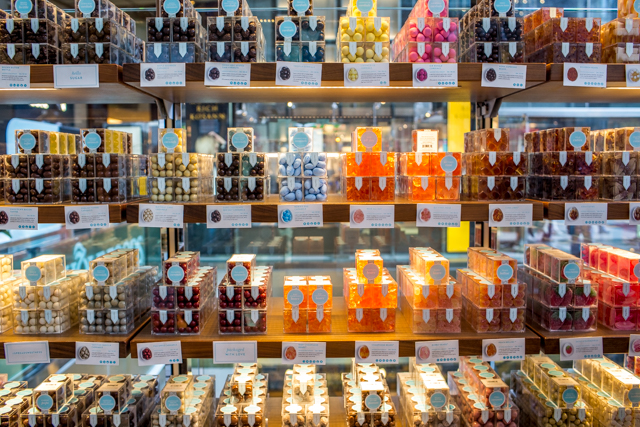 SUGARFINA: Sugarfina's wares are pretty expensive, but they're also fun and attractively arranged, with offerings including gummy rose bears, champagne bubbles, peach bellinis, and tequila grapefruit sours, plus they've got a wide range of international treats and rare finds. The high prices here will probably deter a casual candy consumer, but the design-your-own-"bento box" deal makes for great gifts—a friend of mine included a collection of Sugarfina gummies alongside an invitation to be a bridesmaid in her wedding, and it was very cute.

Sugarfina has a number of locations in NYC; see website for details. 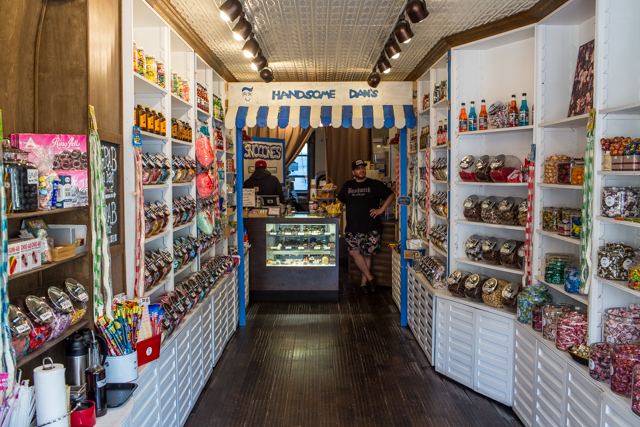 HANDSOME DAN'S: Handsome Dan's famously got its start as a sweets-and-sno cone spot on Bedford Avenue in Williamsburg, but it has since expanded into Manhattan, serving up classic candies to passersby in the East Village. Though the 1st Avenue outpost is small, it lacks for nothing. You can score a whole slew of candy here, including Haribo gummies, lollies, chocolates, loose gummies, Pop Rocks, candy bottles and other gems, plus there's no end to the sno-cone and flavored cotton candy selection. It's also noteworthy that they serve the late, great Verb Coffee here, in case candy's not enough to tempt you.

WILLIAM'S CANDY SHOP: The thing to get at this nearly 80-year-old Coney Island classic is the candy apple, which line the shop windows and come coated in everything from red sugar to coconut to chocolate to sprinkles. They've also got drawers full of loose gummies, along with caramel popcorn, marshmallow treats, chocolates and soft serve ice cream, plus they're conveniently located right by the original Nathan's location, in case you haven't shoved enough fat and sugar in your face.

#best candy
#best candy shops
#best of gothamist
#candy
#candy shops
#original
Do you know the scoop? Comment below or Send us a Tip