Our latest installment of Quick Bites brings us through the best of 2018.

I ate at more than 200 different sit-down restaurants, food stands and stalls, slice joints, bakeries, ice cream parlors, noodle bars, fancy-ass dining rooms, depressing chains, and fast-casual places this year—most of them new in 2018. Below are a list of my favorites. 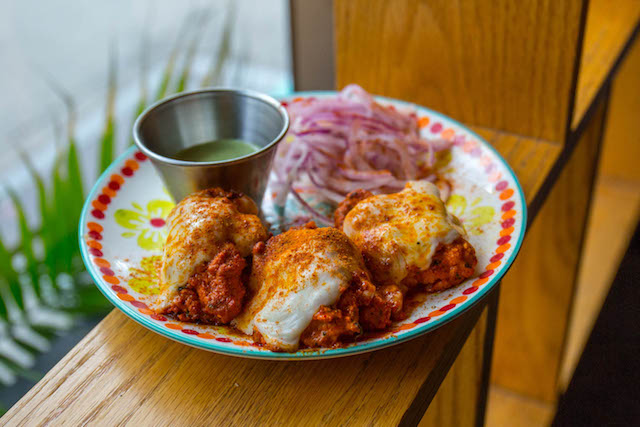 Best New Restaurant: Adda
It was a bold move, opening this "unapologetically authentic" Indian restaurant in a remote corner of Long Island City, but Adda's owner Roni Mazumdar and chef Chintan Pandya wanted to keep their rent (and so, their prices) as low as possible, and figured their cooking and conviviality would be enough of a draw to fill the seats. It paid off big time. Adda was hopping on a recent Wednesday night—it's best not to show up here without a reservation, as there's nowhere to go if you have to wait—and the food is as exciting as ever, including newer dishes like the creamy, fiery Bheja Fry (goat brains) and the plump, funky chicken livers of Pandya's Tawa Kalwji. I'll be back as often as possible in 2019. 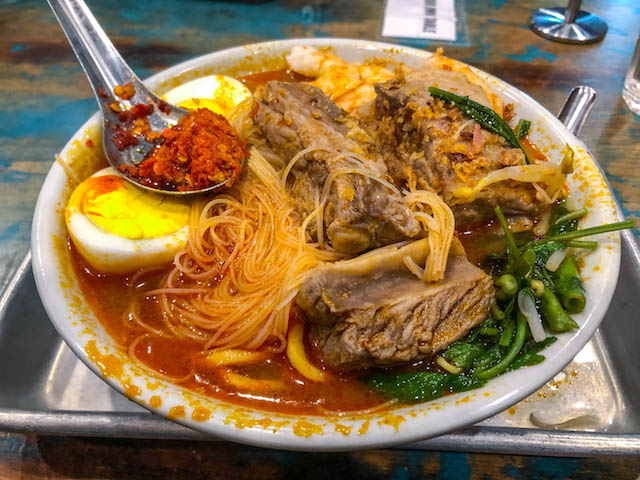 Best New Counter Service Restaurant: Kopitiam
Sequels can be tricky, especially when you're making everything bigger, busier, and more dramatic, but Kyo Pang and Moonlyn Tsai pulled it off with great skill and style to spare this summer with the thrilling Kopitiam 2.0. Billed as a "Traditional Malaysian Coffee Shop" and, as such, perfect for lingering over Pang's excellent pastries and breakfast and snacks, Kopitiam also features a full slate of dishes from which you can make a complete lunch or dinner. New dishes are being added all the time, too, like the excellent Prawn Noodle Soup in pork bone broth I slurped down last week, and the spicy, vegan Criss Cross Shroom. I love being here and eating here. 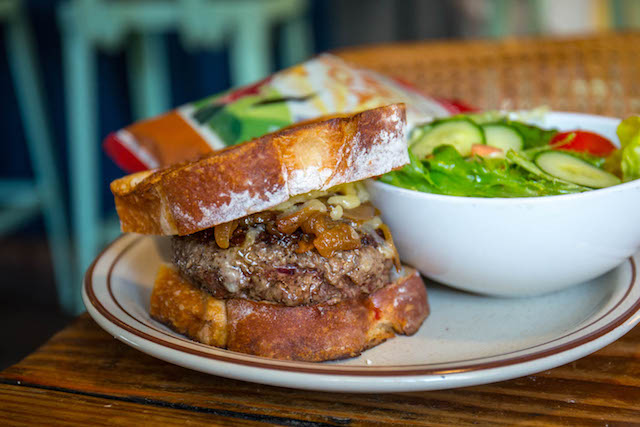 Best New Neighborhood Spot: Madcap Cafe
Heather Fuller's lovely, homey little restaurant is actually about five neighborhoods away from my own, so ever since this summer I've had to find an excuse to hop on a train or a bike and head over to Carroll Gardens and settle in like I live there. Thankfully, Fuller keeps on futzing with and adding to her menu, so excuses have been easy to find. Her new burger, for example, called Kind of Blue, is perhaps even better than the CGBG original, and now she's cooking up a Pho and a Casselout, both of which I plan on eating over the holiday break. If Madcap were a block or two away from my home I'd be here at least once a week. 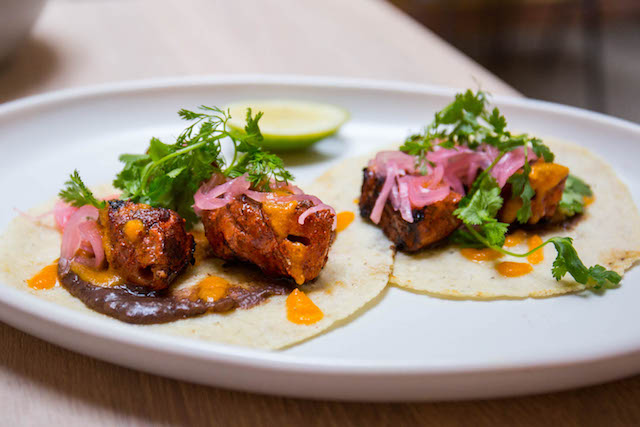 Best New Sceney Restaurant: Oxomoco
This Greenpoint stunner, complete with skylights, succulents, and (heated) front patio, has been packed with young, fashionable folk since it first opened this summer. Don't let that dissuade you though! Even though I am decidedly neither of those things I've always had a great time at Oxomoco. And most important, over the course of many meals, the wood-fired, Mexican-inspired dishes have been consistently spectacular—lots of smoke, lots of heat, but never covering up core flavors—from all over the lengthy, ambitious menu. It's a bit of a splurge for me, but always totally worth it. 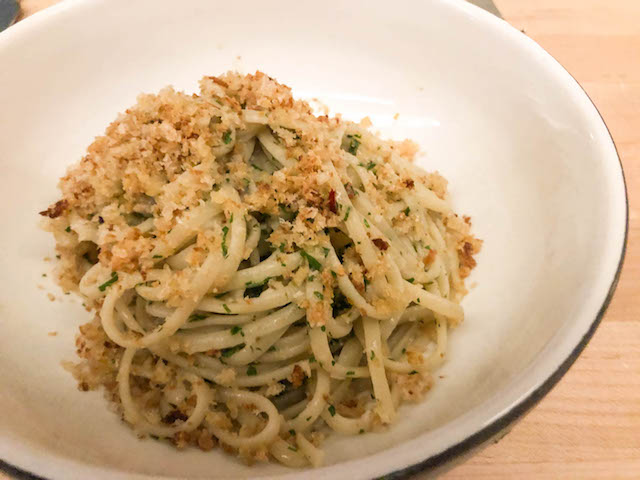 Best Single Dish: Linguine at Misi
A buddy with secret contacts got me one of those impossible reservations at Missy Robbins's Domino Park hotspot this fall and, uncertain when I'd ever get past the front desk again, I made sure to eat as much of menu as physically possible while I was there. The vegetables, the pastas, and the gelatos were all superb, but the thing that literally made my eyes roll back in my head was the Misi Linguini, a gloriously, unapologetically fishy dish with a double hit of anchovy, all chewy and firm and crisp, just a bit of garlic and parsley rounding out the knee-buckling pleasure of each bite. Perfect. 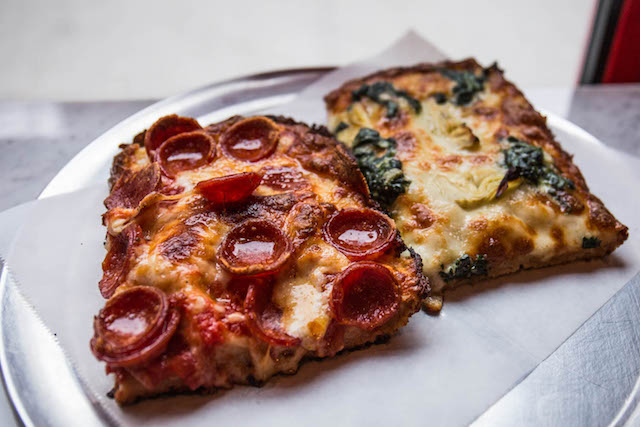 Best New Pizza: Mama's Too
I'm grateful for all the terrific new slice spots to open this year, from Mani in Pasta and Paulie Gee's to Lions and Tigers and Squares, PQR, and Sauce Pizzeria. I'm really grateful for Mama's Too, Frank Tuttolomondo's game-changer on the Upper West Side, featuring an incredible, focaccia-like square that I would eat three or four times a week if I lived right there. And I'm really, *really* grateful that I first went to Mama's Too way back in February, and so got to eat a ton of Tuttolomdo's transcendent slices before the long lines started after Pete Wells blew up the spot in November. That said, if you haven't been, it's worth whatever wait you might find. 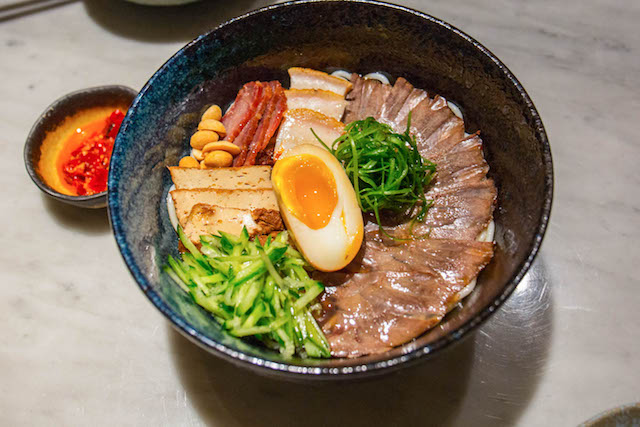 Best New Noodles: Hunan Slurp
The East Village has been graced with yet another surge of new noodle shops this year, and the best of this often-very-good lot is this stylish restaurant on First Avenue, Hunan Slurp Shop. At the core of chef Chao Wang's appealing menu sits a wide array of mifen, hearty bowls of Hunan rice noodles crowded with all sorts of veggies, fish, and meat. The Hometown Lu Fen is the signature dish, with a bit of everything—thin slices of beef, fatty chunks of pork char siu, creamy bean curd, crunchy soy beans, runny egg—laid out lovingly atop the noodles and broth, but the surprise winner for me this fall in the mifen category was the String Bean dish—pickled, chopped into tiny pieces, and stir fried to a crisp, with spicy ground pork and a fried egg rounding things off nicely. This will be my go-to noodle spot all winter. 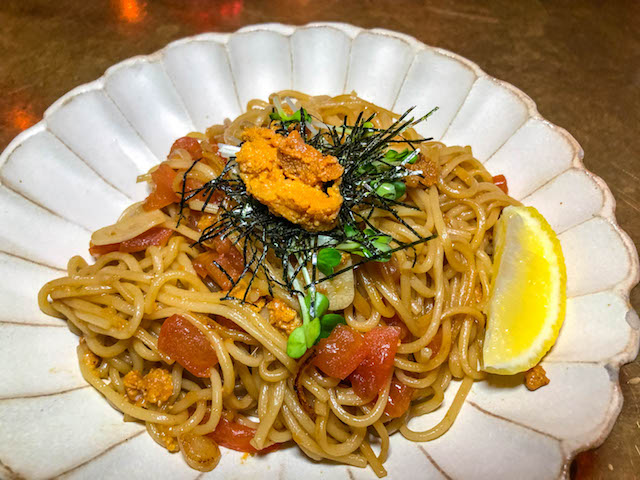 Best New Spaghetti: Davelle
It's no longer the stumble-upon discovery it was at the beginning of the year—reservations are definitely recommended for dinner these days—and the oden machines broke a few weeks ago, with replacements still on order, but the charming kissaten Davelle still serves up one of the best plates of spaghetti you'll find anywhere in town. There are three options, all of which are sublime: a Mochi Mochi Napolitan, starring chewy bacon and a runny egg; a lively Spicy Cod Caviar that's fishy as hell; and a rich and creamy Uni Tomato. 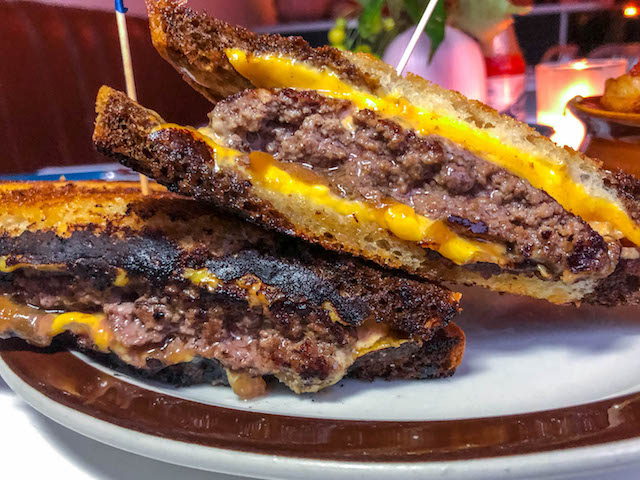 Best New Sandwich: Patty Melt at MeMe's
The self-described "very, very gay" restaurant has been a hit in Prospect Heights, and with good reason: the vibe is invigorating, and the comfort food (with a twist!) is consistently terrific. My favorite thing on Libby Willis's menu, though, is this enormously pleasurable Patty Melt which, despite its occasional classification as a burger, is really more of a straight-up sandwich, the juicy meat covered in caramelized onion, gooey American, and zesty comeback sauce. Craggy chunks of Crispy Potatoes make a perfect accompaniment. Twice this fall I walked into MeMe's on a dreary night, ordered up this delight, and left feeling renewed, happy, and satisfied. 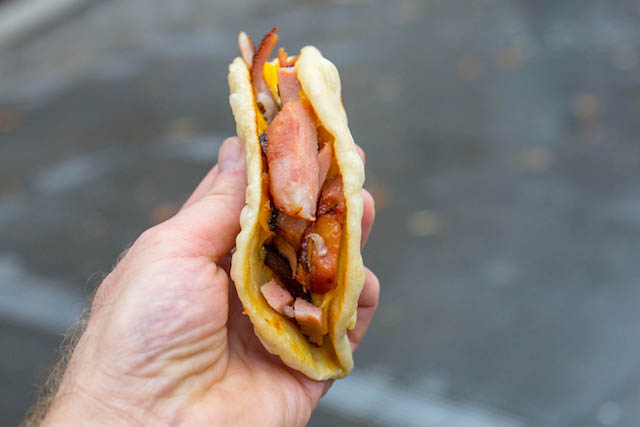 Best New Breakfast: Mortadella at Bang Bar
David Chang's new shopping mall Noodle Bar is just ok, with everything dumbed down a bit (and priced a lot higher) for the tourists, but the counter-service Bang Bar right next door is a full-on flavor blast. The stand-out sandwich here is the taco-sized Mortadella Bang. Available until 11 a.m. only, the Korean flatbread is stuffed with sliced-off chunks of hot, lardo-basted, gloriously greasy meat, melted American cheese, and spicy mustard. Nothing will ever replace NYC's beloved bodega BEC, but it's nice to have a change of pace every now and then.

Located on the third floor of the Time Warner Center; make a left when you get off the escalator (bangbar.xyz) 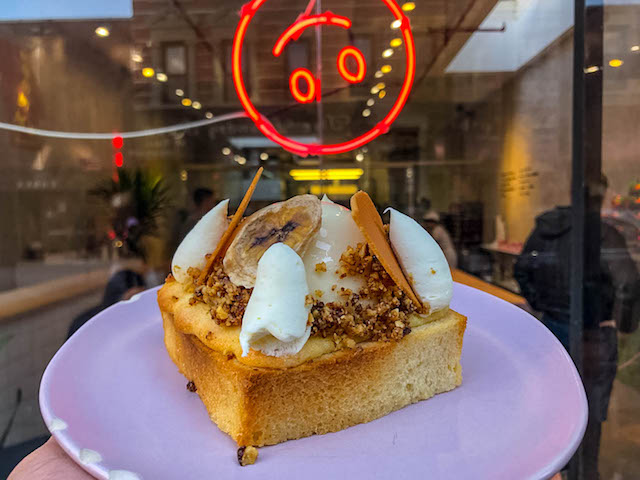 Best New Bakery: Supermoon Bakehouse
Don't be fooled by the Insta-happy trappings at Supermoon (a neon sign that reads "Bite Me NYC" sort of sums up the aesthetic), this Lower East Side pastry shop is serious about its baking, concocting a seemingly never-ending series of audacious, delicious creations. The filled-with-something-gooey croissants (usually available in eight or nine flavors) are the main draw here, and the Frankenfood "cruffins" have a following as well, but the doughnuts are pleasantly decadent, and the savory stuff always hits the spot. And if you come on the weekend, definitely get whatever flavor Croissant Toast they've got going on. It's both technically impressive and one of the best sweet breakfasts in town.

Located at 120 Rivington Street between Essex and Norfolk Streets (supermoonbakehouse.com) 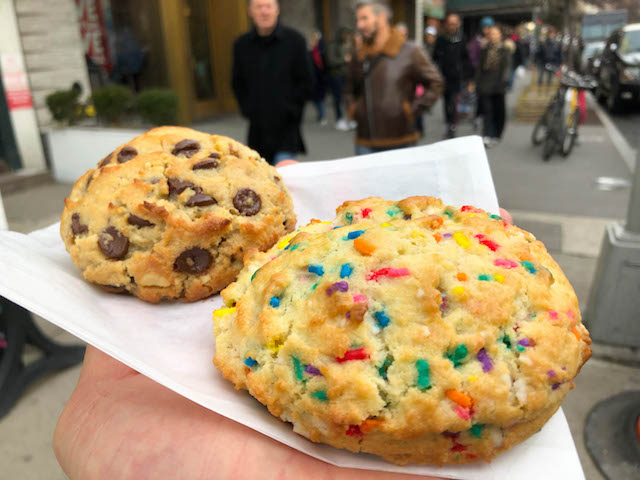 Best New Cookies: Chip
Though the Astoria original has actually been around since the summer of 2017, it wasn't until the Chip booth at the Gansevoort Market opened that I was able to get these exceptional, monster-size cookies on a regular basis. And coming soon: even greater access to the gooey, chunky treats with a Chip standalone shop in prime West Village! Every day at the Gansevoort location they break out four flavors—recent choices have included Funfetti, Chocolate Peanut Butter, Sweet Potato S'Mores, and Coconut Egg Nog—and while most people like to tuck right in while everything's still warm, I think they taste even better the next day, once all the ingredients have had a chance to settle. Which is why I walk around all winter with a couple stowed in my bag, for easy sweet snacking. 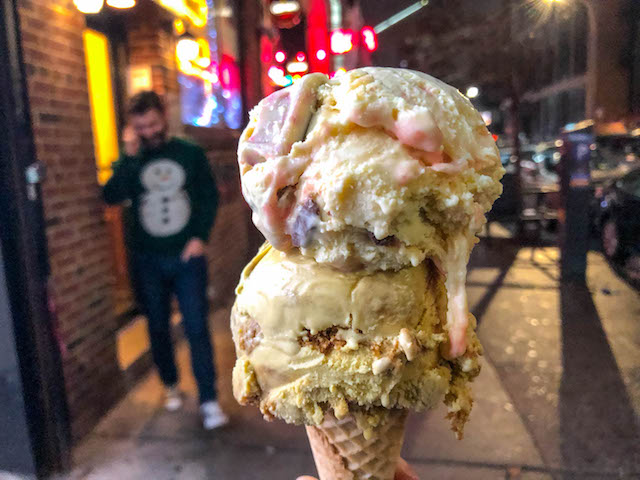 Best New Ice Cream: Kaylee's Creamery
It almost feels like a novelty these days when a straight-up ice cream parlor opens, with no procedural gimmicks or Insta-bait bells and whistles accompanying your frozen treats. So when it happens, and when the ice cream is as good as what they're scooping every day at Kaylee's Creamery, it's worth getting excited about. Kaylee's opened this summer in NoMad/Kips Bay, and while the texture of their stuff has been nice and creamy since day one, in the past couple of months they've really been nailing the depth and intensity of their flavors, from classics such as Chocolate Chip Cookie Dough and Strawberry Shortcake to more innovative varieties like Orchard Road (a pandan base with coconut purple yam swirl) and Covent Garden (black tea base with chocolate-covered toffee). Everything is made on site, and they work their asses off, so I'm betting it'll get even better in 2019. 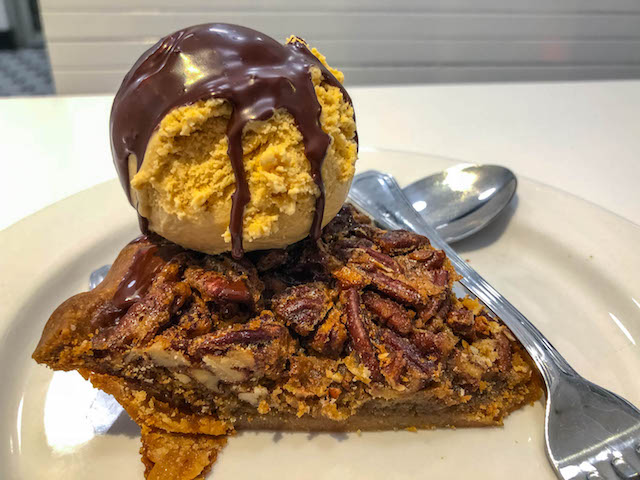 Best New Pie: Morgenstern's
Just in time for prime ice cream parlor season (cold weather means short lines at usually mobbed spots), the excellent new Morgenstern's flagship on Houston Street has launched an extensive pie program, with upwards of eight different varieties available by the slice at any given time. I've only been able to try a few so far, but they've all been superb, with buttery crusts and strong, sticky fillings. Of course you should get yours a la mode, choosing from among the 88 flavors in the freezers; a recent dessert of Pecan Pie with a scoop of Caramel Chocolate Dip had me swooning in my booth.