The Best Bagels In NYC

I was teethed on H&H Bagels, and it's no secret that the heartbreak I experienced when my beloved bagel shop shuttered in 2011 was worse than that from any failed romantic relationship. I don't care if the quality of H&H went down in its later years, for I dream, still, of those hot sesame bagels, and nothing will ever replace them for me. Still, this city has other good bagels, I suppose. Whatever. Here they are, broken down by category—leave your favorites in the comments, and feel free to send me more bagels to ease my pain. 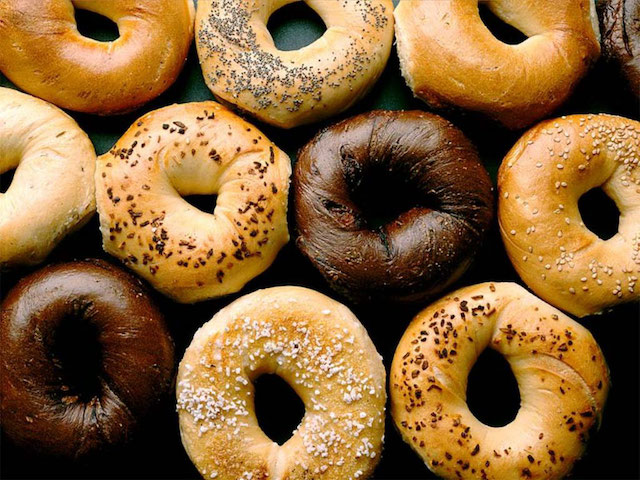 ABSOLUTE BAGELS: I was skeptical that anything could replace my cherished H&H. But thankfully, this uptown joint became the new neighborhood king, selling crispy-crust, light and chewy bagels to the hordes of Upper West Siders and hungover Columbia students that line up outside on weekend mornings. Individual bagels run about $1.25, and you can pair them with an assortment of standard cream cheeses, meats and spreads; do note that, much like H&H, while the bagels are delectable, they don't hold up to snuff after a few hours, so it's best to consume them ASAP. They are also suitable for making pizza bagels, if you are the sort of person who finds that kind of abomination acceptable. 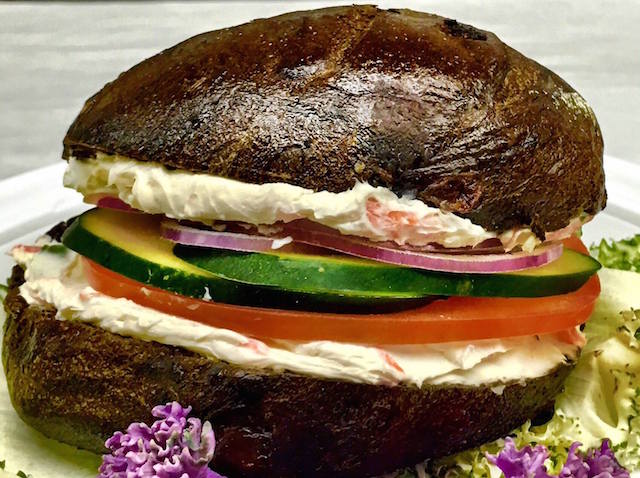 ESS-A-BAGEL: The original 1st Avenue location is dead and gone (though a new East Village/Gramercy spot will arrive...eventually), but Midtown East still serves up the same giant, fluffy bagels for which this Manhattan mainstay's long been known. Some unenlightened folk claim Ess-A-Bagel's offerings are too big, but we beg to differ, and will continue to indulge in a crispy, colossal everything bagel loaded with scallion cream cheese, lox and tomato. Our apologies if you get too close to us on the train later, but at least we help mitigate flu season. 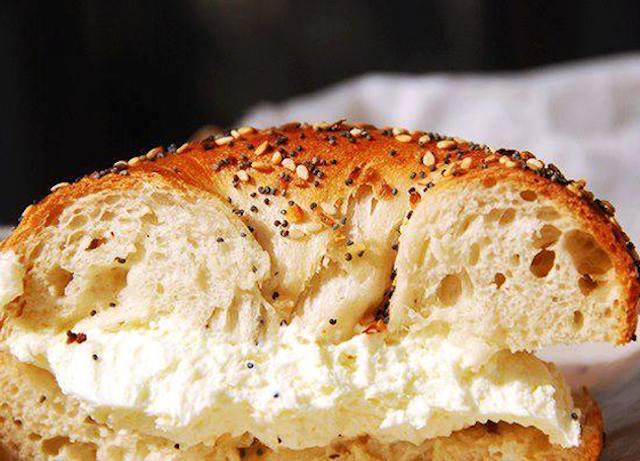 MURRAY'S BAGELS: Murray's broke my heart last year when they gave in to transplants' demands and began toasting fresh bagels, a move I consider a great bagel shop's greatest crime. Still, an everything bagel with lox spread is a work of art here. Go early to get the freshest bagel, skip the toaster and leave in the embrace of bagel-eating angels—note that there's also a location in Chelsea, but the 20-plus year old Greenwich Village spot is above and beyond the best one. 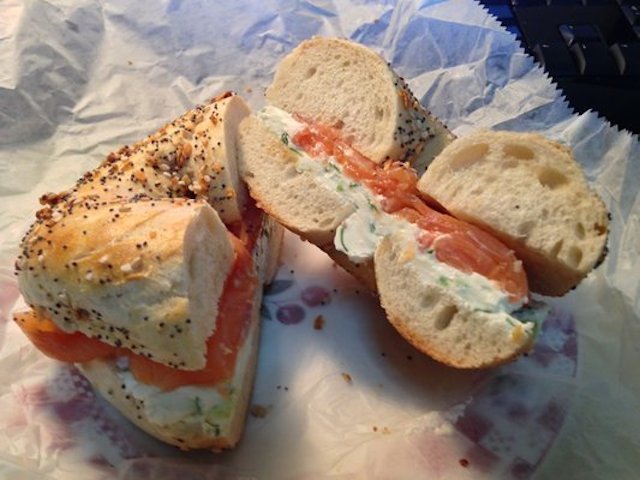 TERRACE BAGELS: This Windsor Terrace spot continues to produce some of the most solid bagels in all of Kings County...and therefore the WORLD. These ever-fresh fluffy offerings are best when doused with a healthy serving of house-made flavored cream cheese or sandwiching sliced turkey and mustard. Plus, there's no need to get them toasted; just slap on a spread and head out to nearby Prospect Park with your breakfast/lunch/midday snack, assuming the sky has stopped winter-crying. 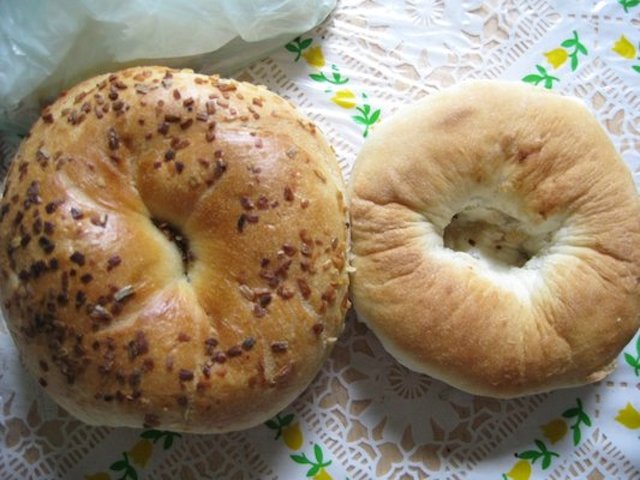 KOSSAR'S BIALYS: This LES institution may be famed for its namesake bialys, but the $1 bagels here are nothing to sneer at, either. The shop underwent a recent renovation and now sells a slew of spreads, but the magic here is still in the bagel itself.

Of course, if you're feeling "adventurous" you can't go wrong with a bialy—a pillowy round thing that looks a little bit like a bagel but will SURPRISE YOU when you bite into it and are overcome by the taste of onion—or try the "pletzel," a savory, foccacia-esque flatbread.

Kossar's Bialys is located at 367 Grand Street between Essex and Norfolk Streets on the Lower East Side (212-473-4810, kossarsbialys.com). 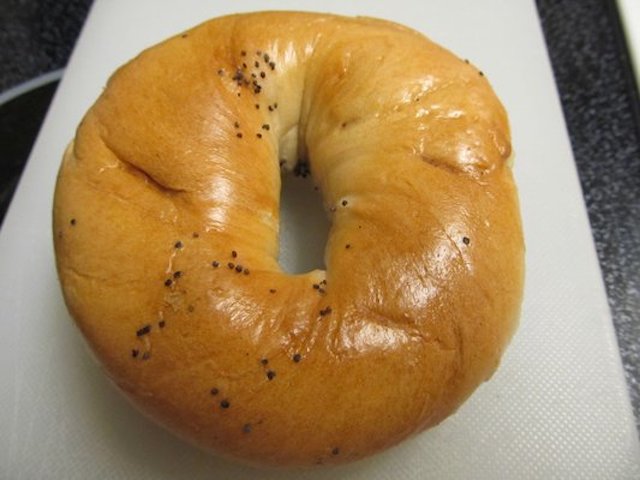 BAGEL HOLE: There's been some controversy over this venerable Park Slope bagel spot. Naysayers say the bagels here are too small and too tough, but I disagree—though I'm a fan of a fluffier bagel, the little guys here are probably the size a bagel should be, and not what our double cheeseburger-eating stomachs have decided they must be. Haters be damned, Bagel Hole's goods are always fresh, dense and chewy, enveloped by the necessary salty, crispy crust. Eat with cream cheese, whitefish, lox or nothing, dream of flocks of angels crowned by bagel halos all night long. 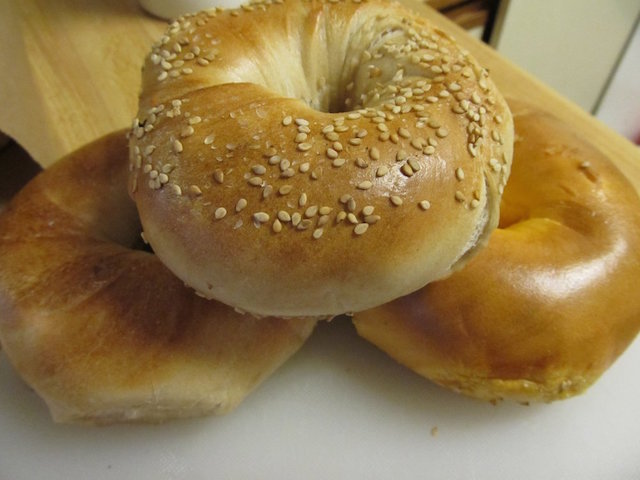 UTOPIA BAGELS: You likely need a car to get to this out-of-the-way bagel shop, but the wares here are well worth the price of a Zip Car rental, with fresh bagels baked onsite earning legions of fans and garnering long, looong lines on weekends. Really, anyone who calls themselves a fan of Real Bagels needs to make the pilgrimage to Utopia—get an onion bagel with lox, and don't breathe near anyone for a week or two. You'll be floating so hard on post-bagel love you won't even notice the isolation. 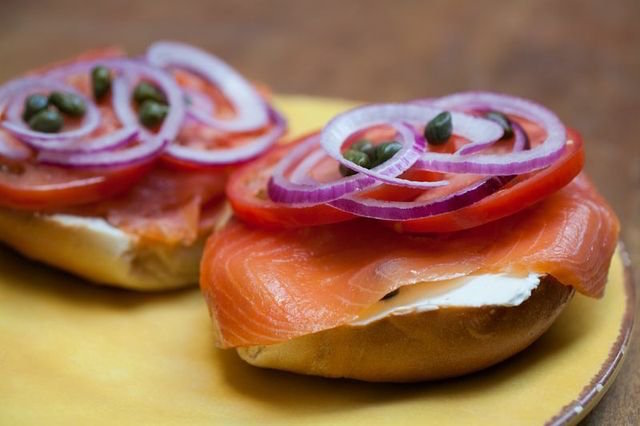 TOMPKINS SQUARE BAGELS: Tompkins Square Bagels—which owner Christopher Pugliese calls “a love letter to the East Village”—has plenty of local charm. Moderately priced, and objectively robust, bagels come shiny and packed with cream cheese, of which there is a wide array of options (including the Birthday Cake cream cheese, which is legendary). Seating tends to be limited, so it may be best to plan to grab-on-the-go. (Sarah Edwards) 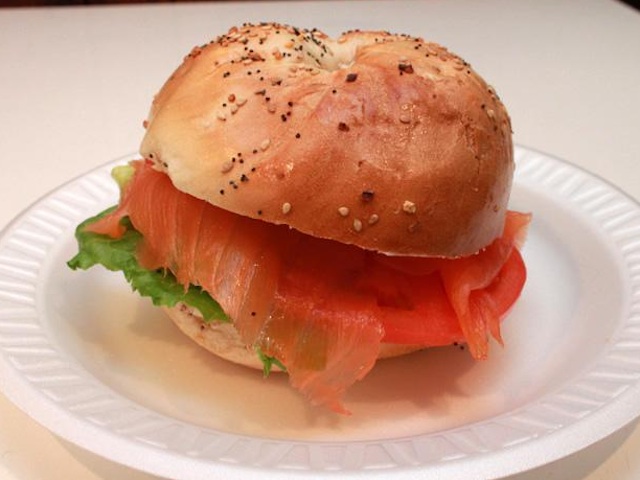 DAVID'S BAGELS: Now that Ess-A-Bagel's out of its longstanding 1st Avenue spot, David's is the indisputable king of the neighborhood, boasting tasty, chewy bagels that somehow manage to stay hot all day. You can't go wrong with a basic bagel-and-cream cheese type deal, but we've been told their egg-and-cheese concoctions are superior to all other egg-and-cheeses in the city; with that information in hand, do what you will.

RIVERDALE BAGELS: The life cycle of a bagel at Riverdale Bagels starts promptly at 3:15 a.m. in the mixer, before moving to the boiler and the oven (cream cheese, of which there is plenty, is also made fresh every morning). Staff is infamously unfriendly, but if you’re really trying to have an authentic experience ordering a bagel in New York, a fireside chat is probably not going to happen. Plus, the owners have been making bagels since 1992, so at least they know what they’re doing. 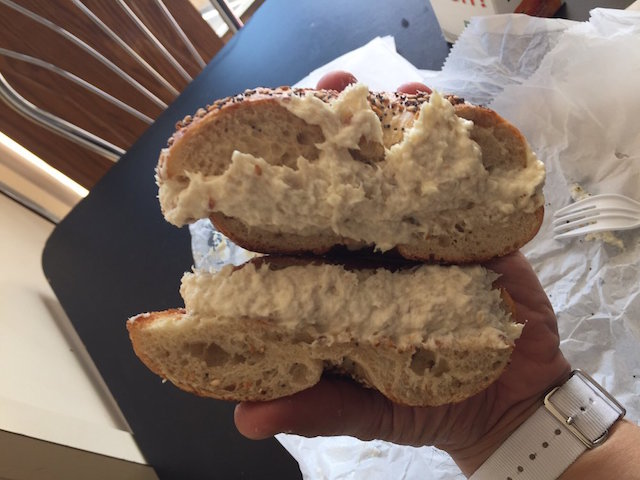 ASTORIA BAGEL SHOP & DELI: Though service here could use a little work, the bagels at this no-frills deli are among the best in the borough, boasting the requisite chewy crusts and soft, ever-fresh insides. Prices here are a little cheaper than at fellow bagelries like Brooklyn Bagel, but you can still smother your bread ring with a variety of cream cheeses. No credit cards, so come in with cash, and be prepared to take your bagel to go, both because the shop gets crowded and because the ambiance isn't anything to brag about. 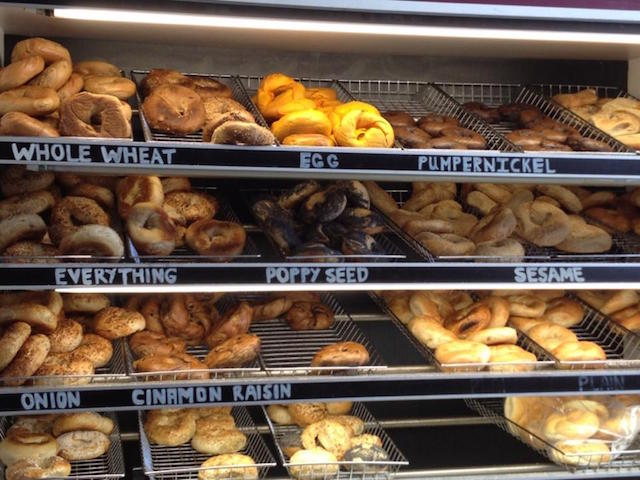 BAGEL SUPREME: This Bay Ridge staple is a short walk from the R train, making it an ideal commuter stop-in on your way to work. The assortment of cream cheeses and spreads is basic deli fare, but the traditional, water-boiled bagels have a reputation for being enormous. Parks and the waterfront are also a short walk away from Bagel Supreme, making it equally desirable as a weekend drop-by. (Sarah Edwards) 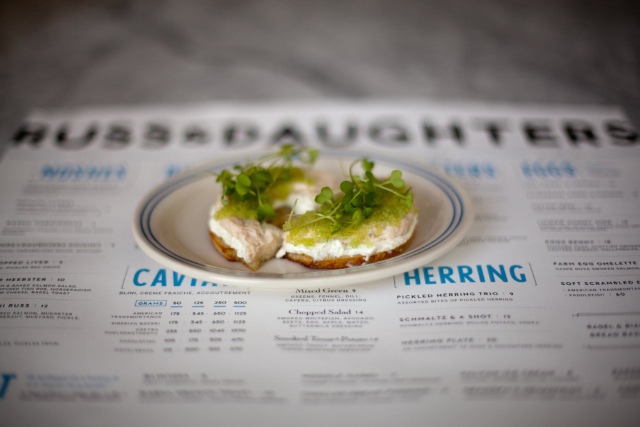 RUSS & DAUGHTERS: Russ & Daughters used to get their bagels from Bagel Hole, but now they bake their own, which is exciting news indeed. But it's what they do with those bad boys that make them such bagel sandwich-making kings. The real treat here is the Super Heebster, a mammoth $10 masterpiece packed with whitefish and baked salmon salad. A feisty schmear of horseradish dill cream cheese gives this baby a real kick, amplified all the more by a dollop of wasabi flying fish roe. Of course, even standard smoked salmon and cream cheese is outstanding here, so don't worry if all that fancy stuff freaks you out too much to try it. 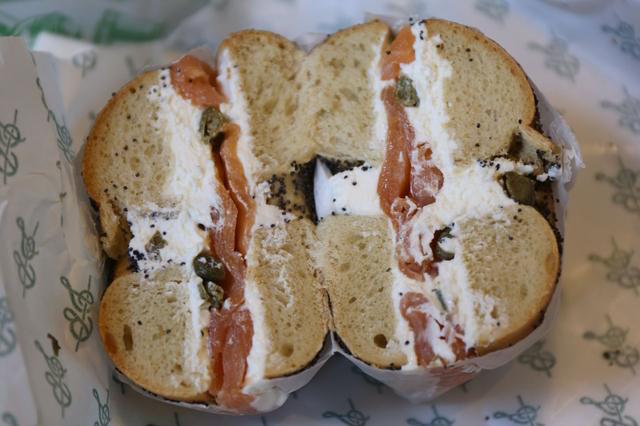 SADELLE'S: It may only be six months old, but this trendy Jewish bakery does not lack for adult fashion cred: it’s earned accolades from nearly every major NYC press outlet (Vogue even featured it in one of those illogically-compiled “morning after the MET” round-ups, for all those who just can’t decide where to go after the MET ball!!). A swarm of lab-coat-wearing counter staff sling bagels by day, while at night, the bakery transforms into a candlelit brassiere. Fish features prominently on the menu, and you can pick from a diverse sampling that includes Sable and Smoked Scottish. Hours are irregular, so make sure you check that Sadelle’s is open before dropping by. (Sarah Edwards) 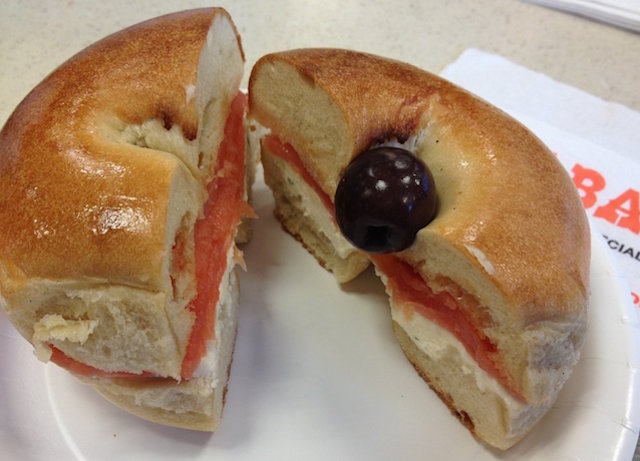 ZABAR'S: The trick to doing Zabar's bagels right is to stop your lazy self from grabbing the premade nova sandwich from Zabar's cafe, and commit to a full-fledged, DIY bagel brunch. Zabar's boils and bakes their mart barley flour bagels in-house, and they've got everything from plain to onion to asiago cheese (highly recommend the latter). Get them fresh in the store, and pick up some scallion cream cheese and just-sliced lox to go with them. Pair that with some capers and fresh-squeezed OJ, and you've got yourself the fixings for a five-star Upper West Side brunch party. (Miranda Katz) 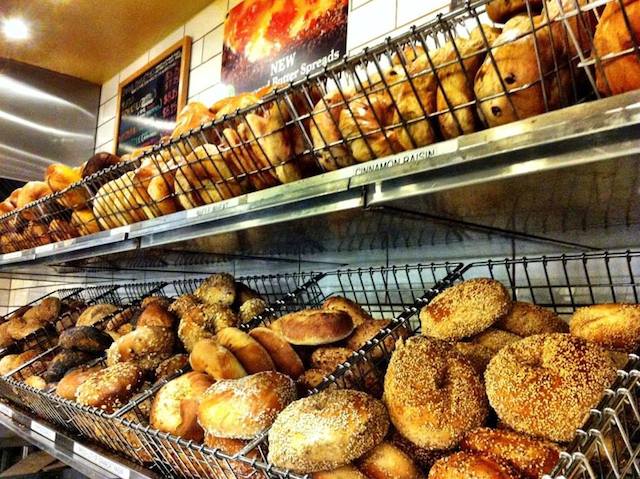 BROOKLYN BAGEL AND COFFEE COMPANY: Ironically, Brooklyn Bagel does not have a location in Brooklyn. It does, however, have three locations in Astoria and one in Chelsea, and every one of them sells spectacular hand-rolled doughy bagels, appropriately crispy-crusted and accompanied by what seems like thousands of spreads and proteins. They have a flavor-of-the-week cream cheese that has, at times, been cannoli cream, red velvet, spinach and white chocolate raspberry. Expect long lines in Astoria on weekday mornings, but your breakfast will be worth the wait.

Brooklyn Bagel has three locations in Queens and one in Manhattan; visit their website for details. 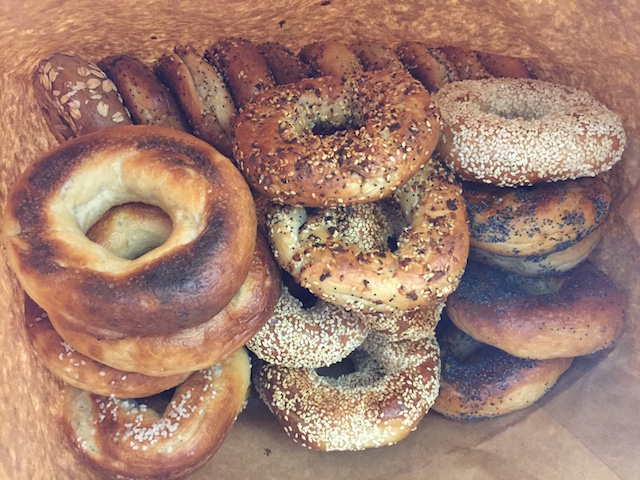 BLACK SEED BAGELS: The East Village was once a haven for day-drinkers, punk-rockers, and shit kickers, but now it's just one big flatscreen run by those frat bros from down the hall. At least there's Black Seed Bagels' new outpost on First Avenue, a no-bullshit basement bakery that's been churning out Montreal-style bagels (and delectable spreads) since they opened late last year. These slightly skinny, big-ringed bagels cover all the necessary bases and have absolutely nothing in common with $9 bespoke biscuits and kale dumplings, not that they should in the first place. Note that the bagelry's original Nolita location is still going strong.(Scott Heins)

Black Seed is located at 170 Elizabeth Street between Spring and Kenmare Streets in Nolita and at 176 First Avenue between East 10th and 11th Streets in the East Village (212-730-1950, blackseedbagels.com).

#bagel
#bagels
#best bagels
#best of gothamist
#original
Do you know the scoop? Comment below or Send us a Tip