It's true that when you're really in need—after a particularly rough night out, for instance, or on any Monday morning—the Best Breakfast Sandwich In NYC is the one closest to you and your aching head. There are hundreds, maybe even thousands, of places all over the city that do a fine job of whipping up a gloriously simple and satisfying bacon, cheese, and egg on a roll, and usually for under five bucks. But while sufficient will suffice, there are some local spots that really excel at this thing, as well as certain cafes and restaurants that have managed to mess around with the basic recipe without ruining the core, visceral pleasure a terrific BEC can bring.

For this list I spent the last month eating dozens of different takes on the classic BEC, in spots both humble and hifalutin. Not surprising, the latter—with prices that reached $17 for a single sandwich!—disappointed far more often than the former. Here though, are the winners, in all their hangover-helping glory. 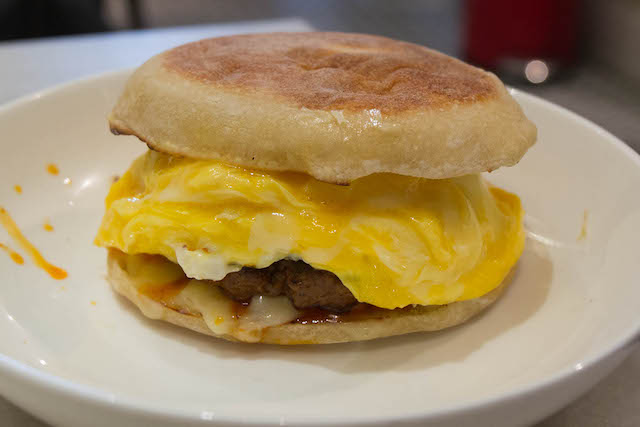 C&B CAFE: Ali Sahin's Sausage, Egg, and Cheese ($9) is even better today than when this stellar neighborhood all-day spot first opened last year, which is a feat indeed. The sausage is still a robust beef merguez, the cheese still a smooth cheddar, the eggs remain fluffy and scrambled, but Sahin now uses an English-muffin-esque roll to hold it all together instead of the original greasy, flaky croissant. It's a transformative sandwich, and right from the first bite, you know your whole day is going to be just fine. 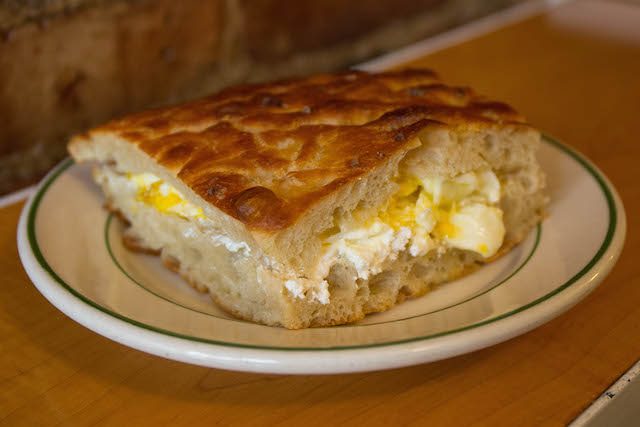 SALTIE: Someone suggests long-time Williamsburg favorite Saltie for breakfast and you might think, "Eh, that Ship's Biscuit ($11) is kinda old news. Also, no meat?" But don't listen to yourself! This is an astonishingly good sandwich, a magical creation that somehow turns soft scrambled eggs, sweet ricotta cheese, chewy focaccia, and a sprinkling of sea salt into a true day-changer. Enter Saltie feeling one way, and leave feeling much, much better.

Saltie is located at 378 Metropolitan Avenue between Havemeyer Street and Marcy Avenue in Williamsburg, Brooklyn. (718-387-4777; saltieny.com) 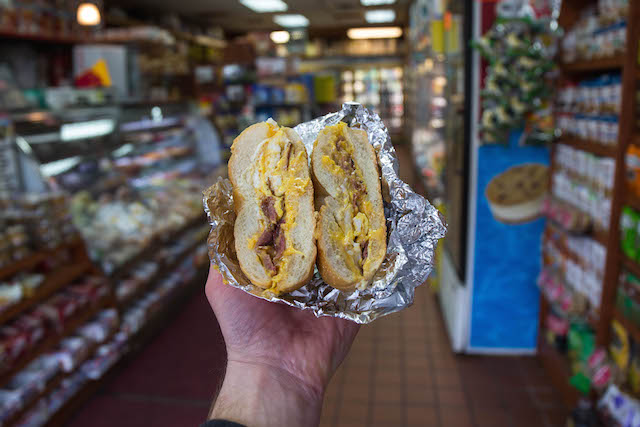 GOD BLESS USA DELI: The most basic of the best-of bunch, the offering at this Greenpoint deli transcends its unremarkable surroundings for a sandwich that should be held up as a model BEC for all random delis to emulate. Is it wizardry at the griddle that makes it special? That extra slice of cheese? The perfectly even, un-miserly distribution of bacon, ensuring that each bite contains the entire holy trinity of fillings? The fact that it costs a shockingly low $2.99? The answer is: all of it. If this is your local, you are a fortunate human being. 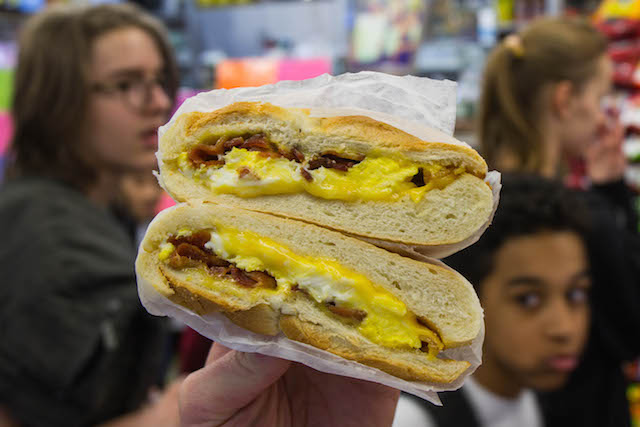 SUNNY AND ANNIE'S: Sunny and Annie's is what happens when a pair of sandwich fanatics take over an otherwise nondescript Alphabet City deli. In fact, it's paradise. There are scores of excellent options on the "menu"—Sharpie-scrawled note cards taped up everywhere—but the one to focus on for our purposes is the breakfast sandwich, which you can get prepared in like 30 different ways. Of course, the classic bacon, egg, and cheese on a roll ($3.25) is deli-BEC perfection, with the ingredients all in balance and boasting the right amount of gloppiness and grease. It's so good you can feel your energy level and sense of well-being rising as you plow through it while standing on the sidewalk outside. 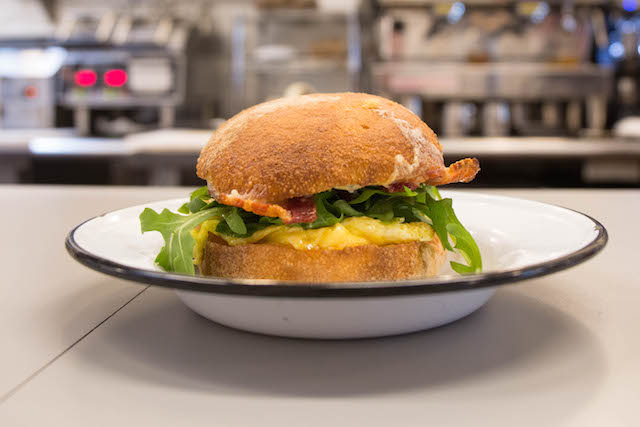 COURT STREET GROCERS: There are three Court Street Grocers locations these days, but only the outposts in Carroll Gardens and Greenwich Village offer up these superb sandwich-makers' version of the BEC. I always order the B+B ($8), which comes with crisp Burger's Bacon between the creamy scrambled eggs and gooey cheese. The arugula may seem like an affectation, a sop to the salad crowd, but it actually adds a nice bitter bite to the whole shebang. The chewy ciabatta ties it all together nicely.

Court Street Grocers is located at 485 Court Street between Nelson and Huntington in Carroll Gardens, Brooklyn, and at 540 LaGuardia Place between West 3rd and Bleecker Streets in Greenwich Village (courtstreetgrocers.com). 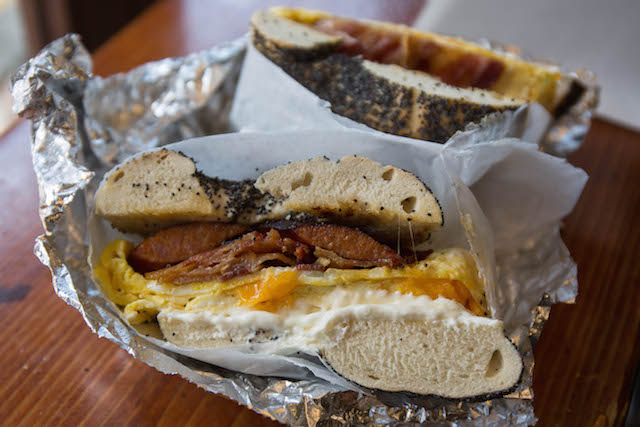 TOMPKINS SQUARE BAGELS: There are a million good things to eat at this East Village institution, but I can't ever skip the Weezer (Blue) ($8.50). Pick whatever bagel you want, and between it you'll find two kinds of meat—bacon and chorizo—a pile of scrambled, melted cheddar; and, adding a welcome tang, your choice of cream cheese. This will keep you full, happy, and satisfied for the entire rest of your day. And don't let the inevitable long line deter you. They are fast and efficient at Tompkins Square Bagels, and the overall vibe is far more friendly than chaotic. 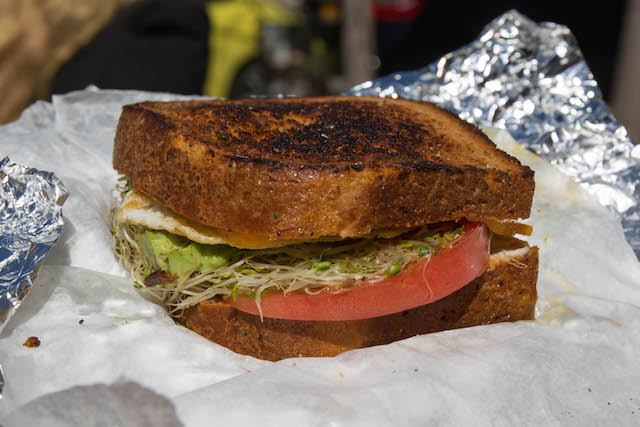 PIES 'N' THIGHS: At first glance, the Pies 'N' Thighs Hippie Banjo ($8.50) doesn't exactly scream "eat me," especially when you can have your pick of all that fried-chicken-and-donuts greatness instead. But trust me, you want this to start your day. Made with fried eggs (cooked "over"), melted cheddar, a thick slice of tomato, crushed avocado, mayo, and (here's where the hippie part really comes in) a pile of alfalfa sprouts, all on toasted, slightly sweet anadama bread, this packs all the impact of a meaty grease bomb even as it transports you back to your childhood on that commune in Vermont. Available until 4 p.m. every day.

Pies-n-Thighs is located at 43 Canal Street between Ludlow and Orchard on the Lower East Side, and at 166 S. 4th Street, at the corner of Driggs Avenue, in Williamsburg, Brooklyn (piesnthighs.com). 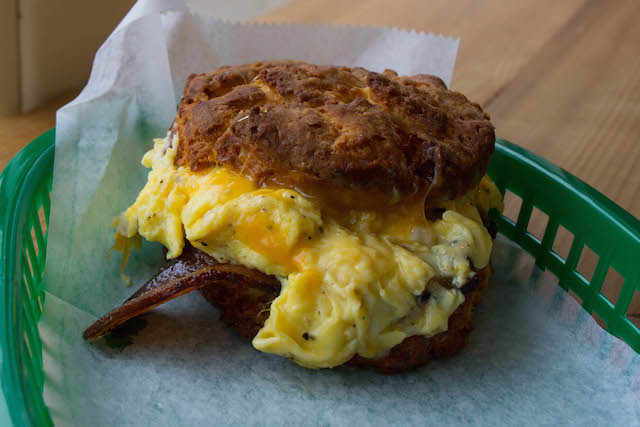 FOSTER SUNDRY: The butcher and grocery parts of this shmancy spot, appropriately located in space once occupied by a Bushwick bodega, are prohibitively expensive. The counterperson's scripted upsell is also slightly annoying (nope, I would have just ordered the $1.50 bag of chips with my breakfast if that's what I wanted, thanks anyway). But Foster Sundry's Bacon, Egg, and Cheese on a Biscuit ($8), which is part of the sandwich service added here last month, is truly sublime. The thick slabs of pig are chewy and wonderfully smoky, the eggs creamy, and the cheese melty in every bite. It's really Cara Nicoletti's housemade biscuit, however, that elevates the sandwich, with its buttery, crackling crust and soft, not-too-crumbly interior.

Foster Sundry is located at 215 Knickerbocker Avenue at the corner of Troutman Street in Bushwick, Brooklyn (718-569-8426; fostersundry.com). 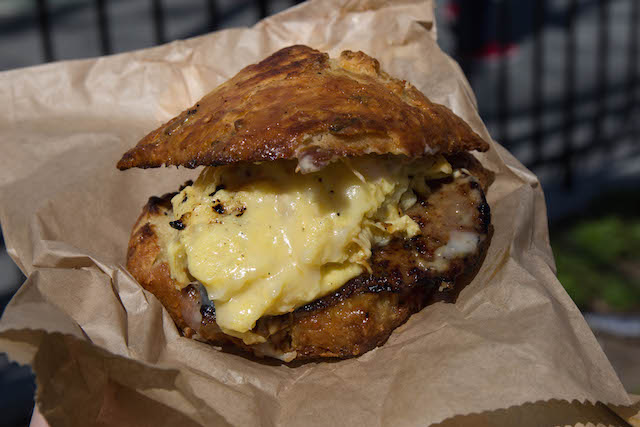 HIGH STREET ON HUDSON: By far the best of NYC's double-digit-priced breakfast sandwich club, the Bodega ($13) at the rightfully-acclaimed High Street on Hudson is a belly bomb with style. The crisp, kicky biscuit has sage and black pepper baked right in, the "malted" sausage is sweet, spicy, and glistening with grease, the sharp cheddar folded in with the soft scrambled eggs. It may be pricey, but you will not need to eat anything else for many, many hours afterward. Available until 11:30 p.m. on weekdays, 2:30 p.m.on weekends.

High Street on Hudson is located in at 637 Hudson Street at the corner of Horatio Street in the West Village (917-388-3944; highstreetonhudson.com). 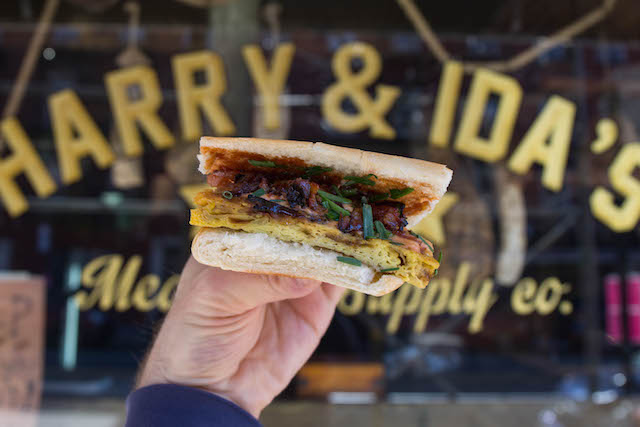 The pastrami at this innovative East Village sandwich shop is some of the city's best, so it seems insane not order it with everything you eat there. And yet, the straight-up Bacon, Egg, and Cheese ($7) is so good here (not to mention five-and-half bucks cheaper than the pastrami version), you will feel no regret about trying something new. Among the differences from nearly every other breakfast sandwich in town: the eggs are hard scrambled, the maple bacon is "shaved" to a crumble, it comes with potato, chives, onion, and—bold move—a schmear of ketchup. It's not an everyday BEC, but since it's only available until 11 a.m. weekends, it's worth the occasional caloric splurge. 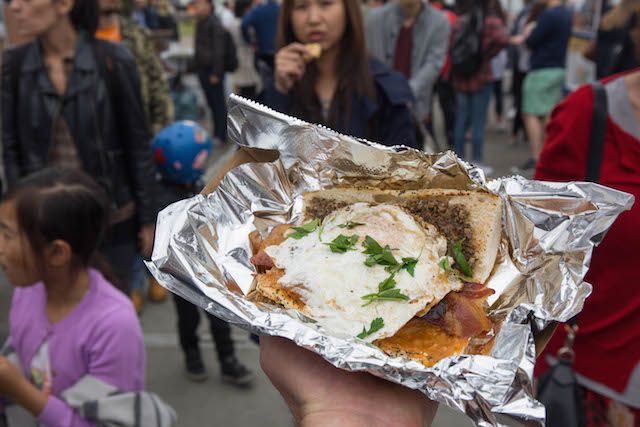 HEROS AND VILLAINS: For his rookie season at Smorgasburg, Matthew Chappina is serving up The Epic Hero ($9) at his sandwich-based booth "Heros and Villains." And, oh man, the audacity of the thing! Here is an entire English breakfast packed into a single sloppy package, including blood sausage, baked beans (in puree form), roasted tomato, mushroom (as a tapenade), fried egg cooked over-easy AND enough bacon to stand out even among everything else going on inside this crazy beast. It's well worth fighting your way through the Saturday Smorgasburg masses for, then devouring on the beach by the river.

Heros and Villains is located at the Williamsburg Smorgasburg on Saturdays through November. (herosandvillainsnyc.com) 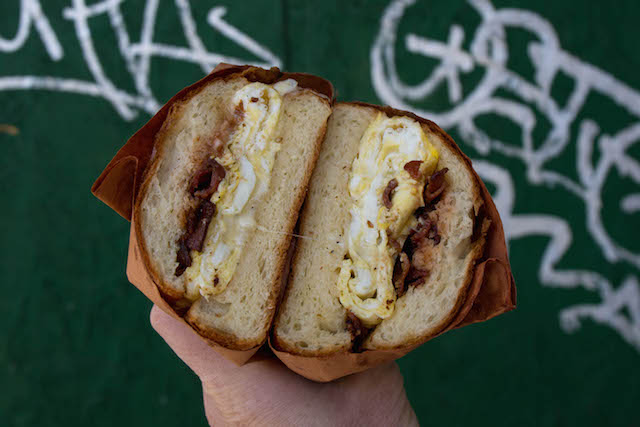 It always feels a little odd to order something other than a bagel at a bagel place, but what the hell, it's the weekend, time to get weird. Nagles Bagels now has locations in Bed-Stuy and Crown Heights, and their Bacon, Egg, and Cheese ($6.75) is served on a squishy-and-sweet milk roll from Bien Cuit, which works better than expected with the no-fuss fillings of scrambled egg, cheddar, and crisp-fried pig. It's not revolutionary, but it's a nicely balanced sandwich, made with love, served at an appropriately chill neighborhood hang.

Nagles Bagels is located at 728 Franklin Avenue between Sterling and Park Places in Crown Heights, Brooklyn; and at 378 Tompkins Avenue between Putnam and Jefferson Avenues in Bedford-Stuyvesant, Brooklyn (naglesbagles.nyc). 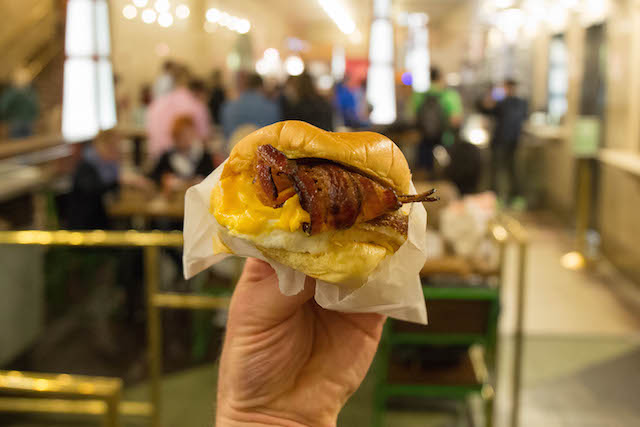 SHAKE SHACK: Cue outrage from Shack haters, but if I traveled through Grand Central on the way to work each morning I'd be tempted to eat this chain restaurant's Bacon, Egg N' Cheese ($5.99) every damn day. It's not huge, so you won't feel like taking a nap as soon as you arrive at the office (or, at least, no more than usual), and, unsurprising for a highly-regimented institution, the balance among ingredients—the potato roll, the melted American cheese, the thick slice of smokey bacon, the griddle-fried egg—is dead-on every time. If you need a little more pep, there are bottles of hot sauce over by the ketchup. Only available in the GCT location (and the one in JFK's Terminal 4), and only until 10:30 a.m. 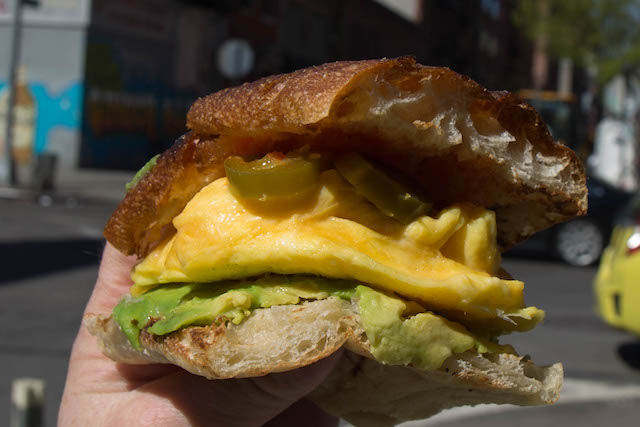 DIMES: The pseudo-healthy hot spot Dimes does lots of things well, and their pseudo-healthy Breakfast Sandwich ($7.50) is no exception. Stuffed to the gills with puffy scrambled eggs, gooey cheddar, a thick layer of mashed avocado, and an attention-getting amount of both jalapeños and homemade hot sauce, this SoCal monster really hits the spot. And if the wait for a table is too ridiculous, get it to go and sit on the benches in the pedestrian plaza right across the street. Available until 4 p.m. daily.

#best bec
#best breakfast nyc
#best of gothamist
#original
Do you know the scoop? Comment below or Send us a Tip