The Beefsteak Dinner Craze Of The 19th Century

Beefsteak Dinner in 1890. (Courtesy of the South Street Seaport Museum)

When New York City's Beefsteak Dinners first started in the late 1800s, they were basically a scene out of a Judd Apatow movie. The Museum of the City of NY revisits the "Beefsteak" craze today, noting they were "initially all-male gatherings in rustic taverns or dingy cellars where, sitting on crates or stools, they would sing, tell stories, eat steaks, and drink ale with abandon. In these 'dungeons,' etiquette was set aside. No knives or forks were allowed. The participants ate tender morsels of beef steak, wiping the grease on large napkins or aprons." Alongside the main course were often slices of bread saturated in gravy.

Dinners were held all over New York City, and the most popular spot was at William S. Miller's carpenter shop on East 40th Street—Miller's father (who went by "Uncle Billy") was also the “father” of the New York City Beefsteak, and owned Shannon’s Corner tavern at Market and Monroe Streets.

“Uncle Billy” Miller was renowned for his beefsteaks, which he personally broiled to perfection on a hickory wood burning stove. As Miller’s, his tavern became a popular meeting place for Beefsteak Clubs from around the city, and elsewhere. One newspaper article from the 1890’s raved “Will anybody who has ever eaten one of Uncle Billy’s beefsteak dinners forget it? The very remembrance makes one’s mouth water. The picture sticks in the memory - Uncle Billy on his low stool before the fire, with his broiler and his big shakers of pepper and salt, his face beaming, the guests seated about on boxes and stools and kegs; the big pewter tankard of ale that never got a rest for a moment.”

According to at least one article, the dinners went unisex sometime in the 1920s—"the institution was essentially masculine until 1920, when it was debased by the Eighteenth and Nineteenth Amendments to the Constitution of the United States. The Eighteenth Amendment brought about mixed drinking; a year and a half after it went into effect, the salutation 'We Greet Our Better Halves' began to appear on the souvenir menus of beefsteaks." One chef reportedly said: "Womenfolks didn't know what a beefsteak was until they got the right to vote." 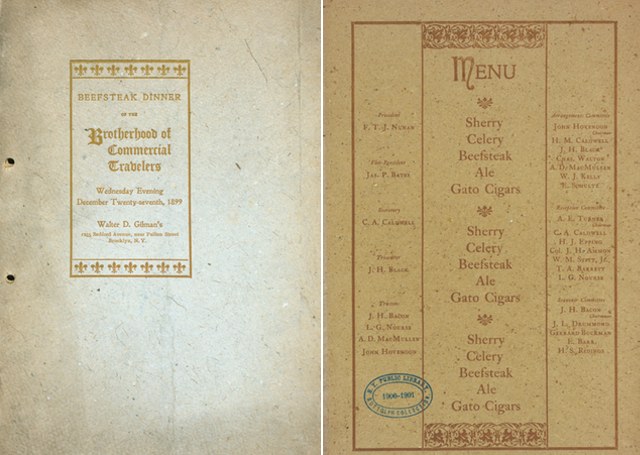 A Beefsteak menu from 1899 (Courtesy of the NYPL)

The William S. Miller Papers at the South Street Seaport Museum Library and Archives have more details about the Beefsteak craze (the museum reopens for the first time since Hurricane Sandy this Friday). And for a vividly entertaining account of Beefsteak mania, look no further than the late great New Yorker writer Joseph Mitchell.