One of the best, if not the best small batch ice cream purveyors in New York City just opened a big new flagship location in Gowanus. Ample Hills Creamery, which has locations in Prospect Heights and at Pier 5 in Brooklyn Bridge Park, is now serving scoops in a two-story ice cream emporium right next to the Royal Palms Shuffleboard Club. Open wide for their new flavor, “It Came From Gowanus”: 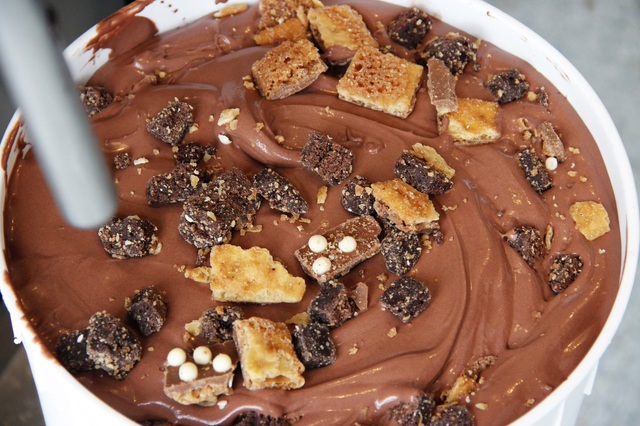 The "It Came From Gowanus" flavor in mid-churn. (Courtesy Evan Barbour)

Inspired by co-owner Brian Smith’s former career as a sci-fi writer, "It Came From Gowanus" is described as "an ultra-dark chocolate ice cream with some special surprises and mix-ins mysteriously lurking within the fudge-like interior." (Hopefully no dolphin.) If it's half as good as their Salted Crack Caramel flavor we're in deep, deep trouble.

The new location features ample (sorry!) seating on the ground floor, a private event space on the second story, plus a roof deck strewn with Adirondack chairs. There's also a bespoke bicycle, pictured here, that can churn a batch of ice cream in around 15 minutes. "It's been a longtime dream of ours to create a kind of 'ice cream paradise,' a multi-purpose building all about ice cream—and this space and the Gowanus community have allowed us to realize that idea," says Smith.

Co-owner Jackie Cuscuna says they can now produce four times as much ice cream as ever, so we can expect a lot more new flavors from Ample Hills in the months to come. Watch your back, Van Leeuwen.

#ample hills
#brooklyn
#Gowanus
#ice cream
#new restaurant and bar radar
#original
Do you know the scoop? Comment below or Send us a Tip
A new Gothamist is coming! We’ve moved comments over to our beta site. Click here to join the conversation and get a preview of our new website.