The Aviation, The Only Blue Cocktail You Should Ever Order

The Aviation cocktail on The Blacklist was way too blue. 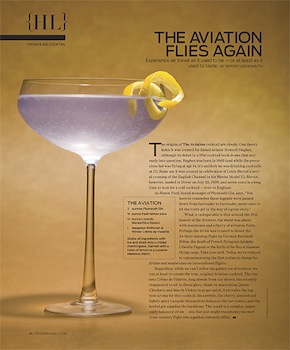 This week on The Blacklist (that new show starring James Spader, aka Steff from Pretty In Pink), Spader's character Raymond Reddington takes FBI agent Elizabeth Keen out for dinner where he surprises her with a deep blue Aviation cocktail. He tells her, "It's from the '20s, tastes like spring, doesn't it?"

The cocktail—which features gin, maraschino liqueur, crème de violette, and lemon juice—is usually lighter purple/paler blue in tone, and it actually dates back to at least 1911. It was created by Hugo Ensslin, head bartender at the Hotel Wallick on Broadway and 43rd Street, and first turned up in print in 1916's Recipes for Mixed Drinks. Ensslin used: 1½ oz. El Bart gin, ¾ oz. lemon juice, 2 dashes maraschino liqueur, and 2 dashes crème de violette (serve chilled, no ice). Later incarnations of the recipe eliminated the crème de violette, making it more sour and stripping it of its otherworldly hue.

The drink never really took flight, and according to some historical look backs, "Its obscurity seems a combination of bad luck and an uncommon-ingredients recipe... there is no indication that Aviation, the cocktail, was the fashionable drink of its day."

Crème de violette "disappeared from the United States in the 1960s," but reappeared in 2007, so you can find it today if you want to recreate the classic version of the drink. As this guy says, it's "the only blue cocktail you should ever consider":

As for why it's called The Aviation... just look at the color of the sky.

#aviation
#aviation cocktail
#cocktail
#recipe
#original
Do you know the scoop? Comment below or Send us a Tip