The 9 Best Sports Bars In NYC

Sure, you've got a cool flatscreen at home and all, but no matter how good (or enraging) that Giants game looks in HD, it's even better when you're watching it at your favorite sports bar, cold brew and a few BBQ chicken wings in hand. And though some local sports bars have gotten too bro-ey even for the frattiest of us, there are still plenty of go-to standbys for sports enthusiasts and sporadic watchers alike. Here are a few of our favorites; we know you'll leave yours in the comments. 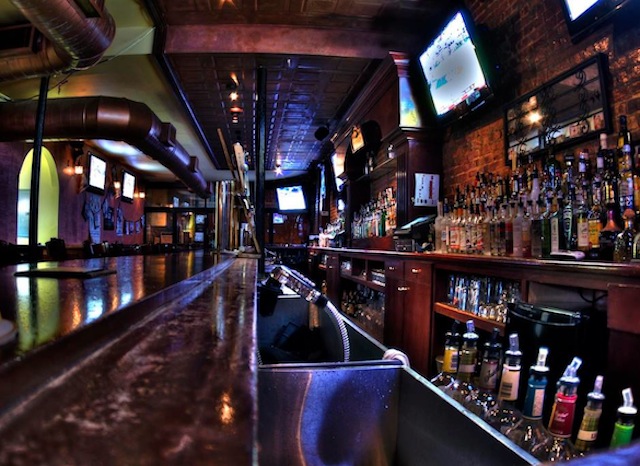 MULHOLLAND'S: Mulholland's has been one of our favorite sporty bars for a while now, with its friendly staff, low-key clientele and super tasty hot wings. Owner Shawn Mulholland is a native New Yorker, and you won't be hard-pressed to find a big crowd gathered for a Knicks game. But the bar boasts plenty of televisions—each one labeled with the game it'll be playing so you can grab a good seat—and fans of teams from all over can be spotted knocking back a few Budweisers here. Do try the wings ($7 for a single order, $12 for a double), which come in flavors like Bloody Mary, BBQ and Scorching Death, and head out to their good-sized backyard if the weather's decent. But don't forget that Mulholland's is an "IDIOT-FREE ZONE", as a sign in the bar proclaims; we expect you to keep it that way.

Mulholland's is located at 312 Grand Street between Roebling and Havemeyer Street in Williamsburg, Brooklyn (718-486-3473, mulhollandsbklyn.com). Follow them on Facebook. 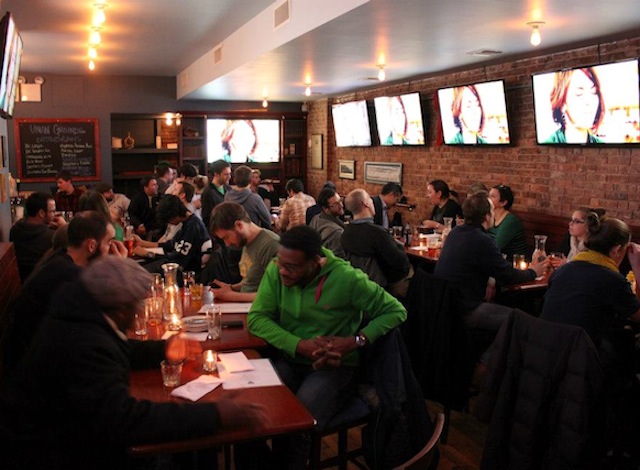 UNION GROUNDS: This Carroll Gardens sports spot is run by the same folks behind stellar bar Black Mountain Wine House, so you know you're in good hands when you stop by to take in a Yankees game. Though the Smith Street space is small, there are plenty of televisions for optimum game day viewing, and bartenders are down to take requests if there's a specific team you're dying to see. Booze-wise, they've got the usual brew suspects in bottles and on draft, along with cans of Radeberger Pilsner ($5) and Guinness ($7). Do note, though, that the food at Union Grounds is fairly average for pub grub, so if you're hungry you might want to hit up one of Smith Street's many other eateries beforehand.

Union Grounds is located at 270 Smith Street between Degraw and Sackett Streets in Carroll Gardens, Brooklyn (347-763-1935, union-grounds.com). Follow them on Facebook. 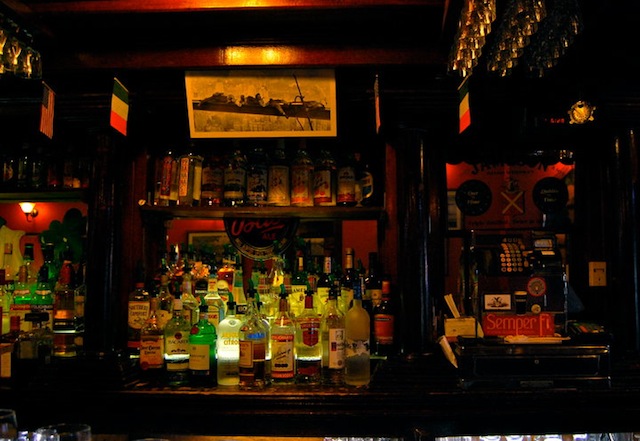 IRISH ROVER: This lovely Astoria establishment leans more towards Irish pub status than straight-up sports scene, but it's still a prime neighborhood spot to stop by for a game. In addition to the smattering of televisions scattered around the bar, the Irish Rover boasts a number of dart boards you can hit up for free, along with Buck Hunter and a jukebox. Best of all, if you make nice with the bartender, you can score a buyback on your third drink. You probably want to stick to beer here, and order a draft of Guinness; you're in an Irish bar, for pete's sake. 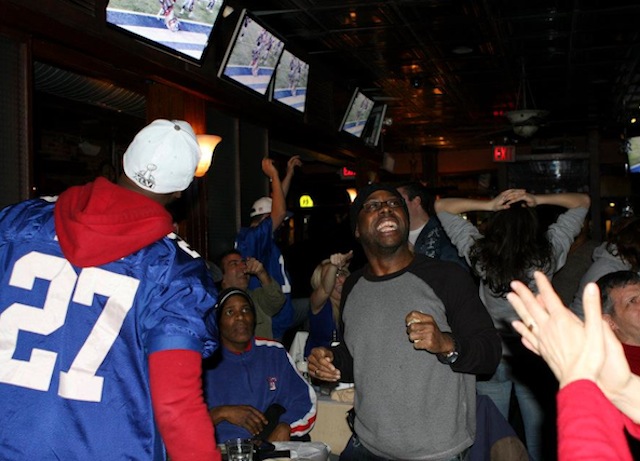 200 FIFTH: This Park Slope bar, located not far from the Nets' home base at the Barclays Center, is notably massive, boasting over 100 televisions that hang over every booth in the place, in addition to a line of flatscreens above the bar. 200 Fifth hosts plenty of events for big games, playoffs and other noteworthy sports shindigs, and event or not, it's a solid place to stop by for a brew and bite to eat. They do offer an entree menu that goes beyond the typical pub offerings, but your best bet is to keep it simple; stick with the burgers and sliders on the bar's bargain menu, and make sure you pair your dish with a side of crispy curly fries.

4TH DOWN: Williamsburg's not exactly known for its sports bar scene, but between Mulholland's and this Northside bar, there are a few surprisingly solid selections when it comes to catching a game in the 'hood. The spacious bar's got plenty of big screens for game days, and they air everything from local match-ups to out-of-town teams to college games; the bartenders are even wont to set up a special TV for you if there's a particular game you need to watch. Plus, 4th Down has a couple of skee-ball lanes, an air hockey table and other arcade games in the back, along with a giant Jenga set that's perfect for playing with when you can't bear to watch the Jets anymore. 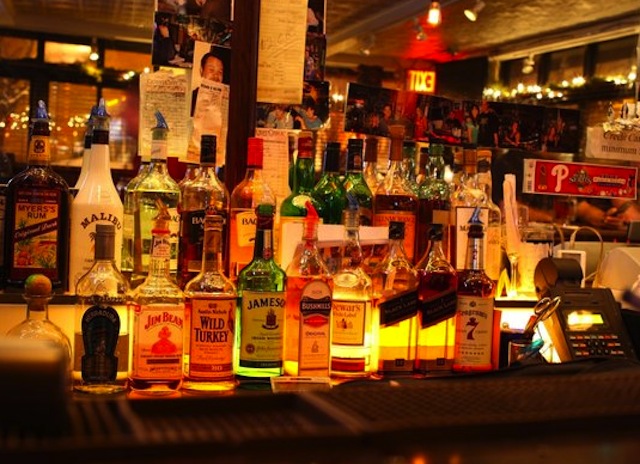 WOGIES: Wogies is a Philly bar, so if you can't stand to be near someone in an Eagles jersey for any period of time, it's best to stay away. But if you happen to hail from Philadelphia, or don't feel too strongly about teams from the City of Brotherly Love, this Greenwich Ave spot boasts way better food than most of its peers, making it a prime place for hungry folk to take in a game. As one might expect, Wogies specializes in the Philly cheesesteak, with offerings ranging from regular old steak and Cheese whiz to Pizza Steak to a Cheese Steak Hoagie (that's right, hoagie). They've also got Garbage bread—Italian bread with meat, cheese, vegetables or potatoes baked inside—and stellar wings; pair your Philly-themed dish with a Pennsylvanian Yeungling draft, or if you're feeling too treasonous you can opt for a Brooklyn Lager instead.

Wogies is located at 39 Greenwich Ave between Charles and Perry Streets in the West Village (212-229-2171, wogies.com). Follow them on Facebook. 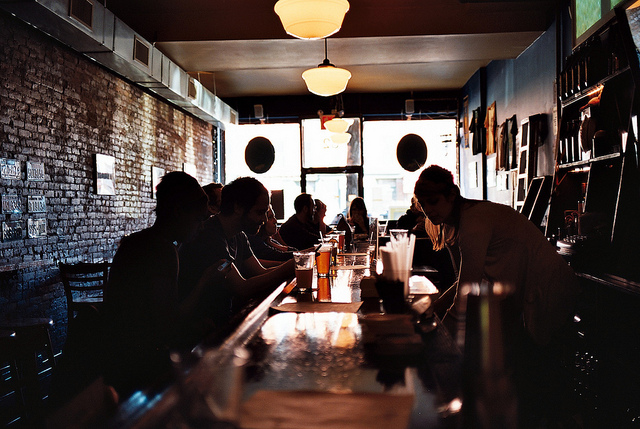 PACIFIC STANDARD: This one's another prime spot for transplants, this time out of the West Coast. As its name suggests, Pacific Standard caters to a Bay Area crowd, so if you're looking for a place to catch an Oakland A's game, this is your bar. Even the brews are Golden Gate-centric, with offerings from California brewers like Anchor Brewing Company, Anderson Valley and Sierra Nevada. Like Wogies, though, Pacific Standard is fun for East Coasters too, and in addition to the TVs airing sports games, they've got a top-notch trivia competition (not for novices!) on Sunday nights.

Pacific Standard is located at 82 Fourth Ave between Warren and Bergen Streets in Park Slope, Brooklyn (718-858-1951, pacificstandardbrooklyn.com). Follow them on Facebook. 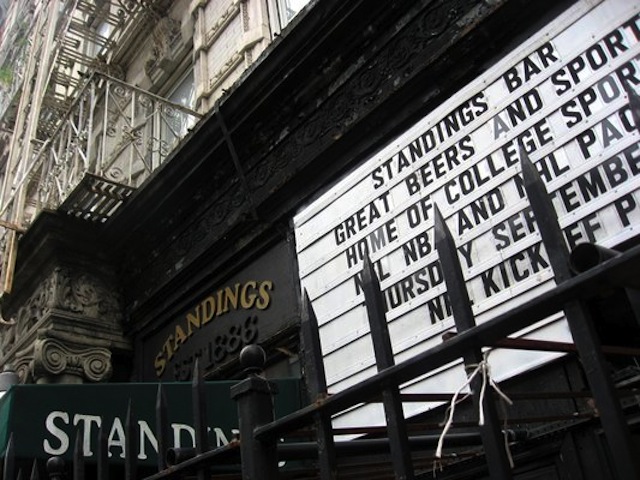 STANDINGS: Standings might be a Sox-friendly establishment, but even if you curse the ground Big Papi walks on, there are plenty of games aired here that don't come out of Boston. The East Village space is decidedly divey, which is good news if you're looking to avoid some of the more fratastic sports enthusiasts that post up in the neighborhood; plus, they've got a stellar craft beer selection, with rotating offerings from the likes of Greenport Harbor and Wagner Valley that rarely repeat. 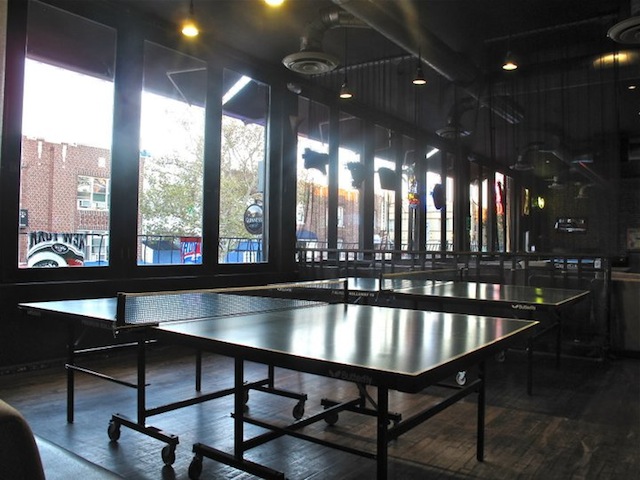 BREAK BAR AND BILLIARDS: Break is more than just a place to watch sports, although you can certainly catch a few games broadcasted on several big screens behind the bar. True to its name, this Astoria bar boasts many, many pool tables, along with a bunch of ping pong tables ripe for competition. An hour of pool or ping-pong for two runs $10, but you can get a free game if you get a drink during happy hour, which runs daily until 8 p.m. The bar gets crowded on weekend nights, but they've also got air hockey tables, a hoops game and some arcade games for patrons, over a dozen craft beers on tap and a killer bacon cheeseburger ($8), so you're sure to stay occupied while you're stuck waiting for a pool table to open up.