Super Bowl Sunday is almost here, and everyone's got that Super Bowl commercial with Tom Hiddleston the Big Game on the brain. And with all that sports-ing and shouting, etc. comes the snacks—chicken wings and french fries and nachos galore! Of course, the Super Bowl isn't the only time for cheesy, fried bar food, and this city's got plenty of joints serving up fine pub fare whether or not Peyton Manning's oddly-shaped head is on TV. Here are our favorites; as always, leave yours in the comments. 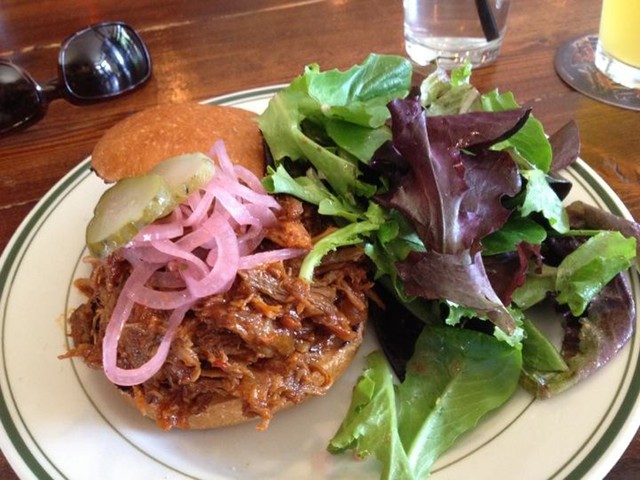 THE DOUBLE WINDSOR: This low-key gastropub right by Prospect Park is a win for beer enthusiasts, boasting over a dozen brews on tap, and even more offerings in can and bottle form. But the real draw here is the bar food, with all the hearty, greasy-but-not-too-greasy meats and sides a boozing body can handle. A $12 burger comes on an Amy's Bread bun loaded with grass-fed Creekstone Farms beef, paired with a heaping plate of crispy fries. The pulled pork sandwiches ($11) are tender and flavorful, even if they come with chipotle mayonnaise (odd!). And the zesty sriracha chicken wings will tempt even the most furtive of wing naysayers, though do be sure to double/triple/quadruple up on napkins if you take this route.

The Double Windsor is located at 210 Prospect Park West between Bartel Pritchard Square and 16th Street in Windsor Terrace in Brooklyn (347-725-3479, dwbrooklyn.com). Follow them on Facebook. 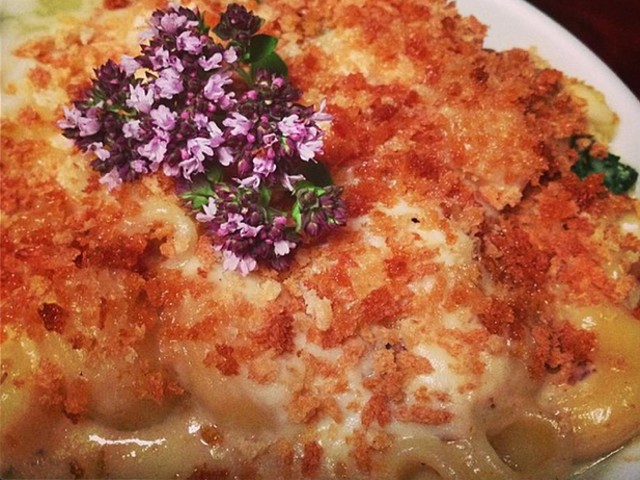 JALOPY TAVERN: If you can manage to squeeze into this hip, oft-packed honky tonk/blues bar, you're in for some mean small bites. The feisty jalapeno poppers ($7) are particularly decadent, wrapped in bacon and served with cream cheese and house ranch dressing. Wing specials run $10 for 8, the crispy tater tots ($3) are a solid accoutrement to a $5 beer-and-whiskey shot deal, or you can opt for the creamy white cheddar mac & cheese ($10) and shell out for a fancy Old Fashioned ($9). Post-feast, stop by the neighboring Jalopy Theatre for some old-timey bluegrass and country music, and let the fiddles and banjoes lull you into a triglyceride stupor.

Jalopy Tavern is located at 317 Columbia Street between Hamilton Ave and Woodhull Street at the Columbia Street Waterfront, Brooklyn (718-625-3214, jalopytavern.biz). Follow them on Facebook. 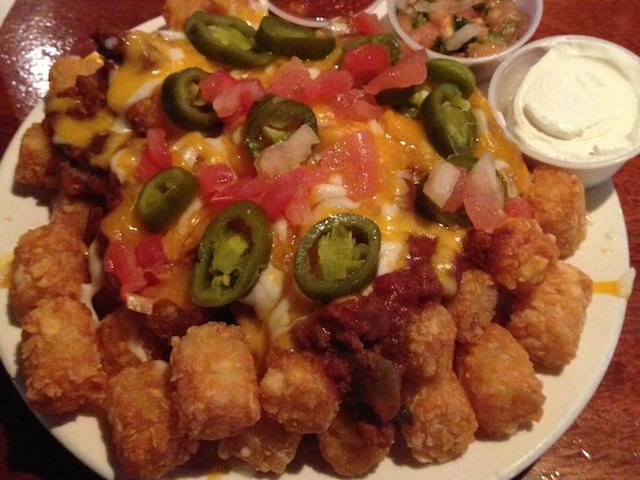 THE AMERICAN RETRO BAR AND GRILL: This spacious Hell's Kitchen tavern's got the full gamut of pub grub, with burgers, turkey clubs, wings and sliders galore. But for a real boozy bar treat, you must go for the "tot-chos," American Retro's brilliant fried potato answer to the nacho. "Tot-chos" come with all the usual nacho fixings, like jalapenos, melted cheese and salsa but instead of dry, crumbly tortilla chips the toppings are poured all over crispy, crunchy tater tots. Once you go tot-cho, you can never go back—just try to avoid all the hungry tourists who cram inside after grabbing their Daily Show tickets. 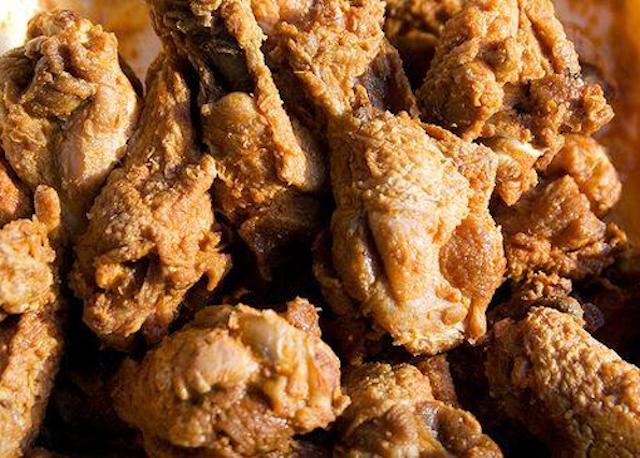 THE WING BAR: Wing Bar's got "wing" right in the name, so if you're a fan of this sauce-slathered standby you know you're in the right spot. Ten wings run $9, 20 are $16.50, and if you're with a group/have a serious wing-eating addiction, you can order 100 for $75; wings come mild, medium or spicy to your specification, and you can also opt for BBQ sauce. If chicken wings aren't your thing, they do serve a selection of burgers, veggie burgers and sandwiches but, hey man, you're in a wing bar, do as the Romans do if you can. They've also got plenty of brews by the bottle and on tap, including Captain Lawrence Pale Ale and Peak Organic Seasonal, and beers and well drinks run 2 for 1 during happy hour. 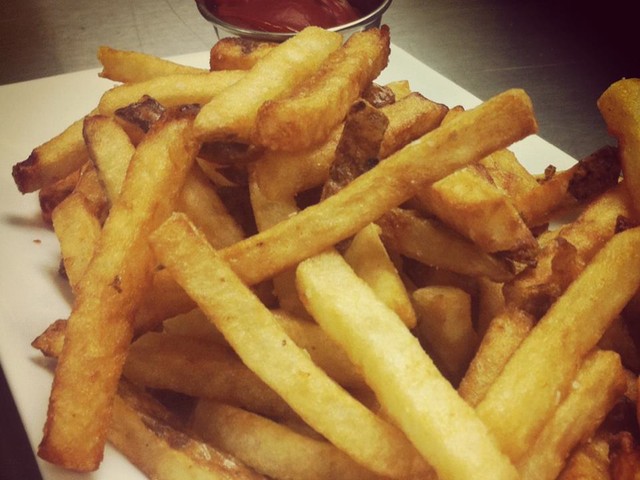 FIVE LAMPS TAVERN: For a pub grub experience up north, head to this Manhattan Valley spot, where friendly bartenders, brews and IPA-battered fries run a-plenty. Try and get a seat at the bar for optimum service, or head to the patio out back when it doesn't look like the clouds are having a goose-down pillow fight. Five Lamps' burgers are a favorite, with the signature 5LT Burger ($15) crusted in Cajun spice and topped with a bacon and Roquefort infused Llandudno blend. The grilled chicken sandwich ($12) is another top dish, served with fresh mozzarella, basil pesto and herb dried tomatoes, and if you're not a meat-eater, the cheesy margarita flatbread ($10) is a solid veggie option. But Five Lamps' standout menu items, above and beyond, are the handcut IPA french fries ($6), soaked in a savory brine sourced from West Coast India Pale Ale. You'll never eat normal fries again, curly, crinkly or pulled from a McDonald's grease pan. 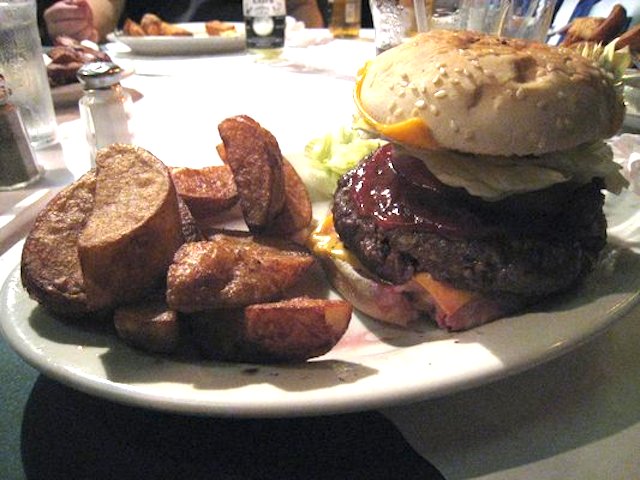 DONOVAN'S PUB: Donovan's is a burger man's dream, serving thick, juicy patties topped with everything from American cheese to bacon to chili. Burgers run $9-$10, they've got turkey and veggie burgers on the menu as well and all sandwiches come paired with a side of thick steak fries; other pub fare favorites include the honey barbecue wings ($5.50) and the old-school shephard's pie ($11.95) made with ground beef, mashed potatoes, peas and carrots. Best of all, despite a recent change in ownership, Donovan's has maintained its old world tavern feel, appealing to neighborhood stalwarts and newbies alike; pop in for a pint, stay for the food and (very loud) conversation. 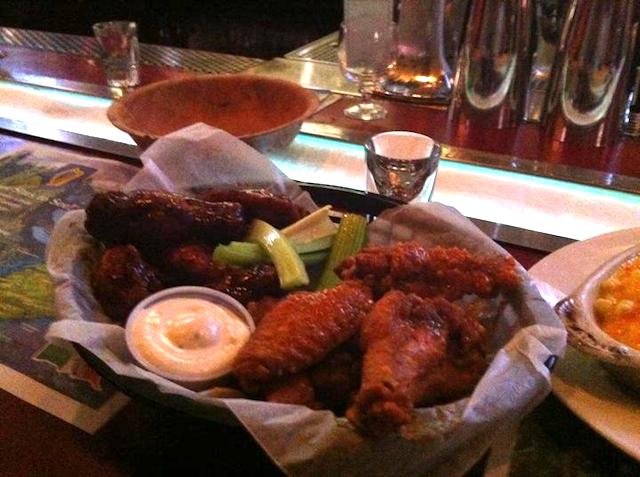 LANSDOWNE ROAD: Come summertime, Lansdowne Road's frosty Ice Rail makes it one of the best spots in the city to indulge in an ice-cold beer. But even when the weather outside is frightful, the Midtown sports bar boasts arguably the best chicken wings in town, crispy and slathered in a sauce of your choosing: mild, medium, hot, BBQ, or garlic parmesan. Wings run $10 for 10, $19 for 20 and $45 for a strong (wo)man's 50; dunk 'em in blue cheese dressing and pretend those celery sticks count as a day's worth of vegetable nutrients. 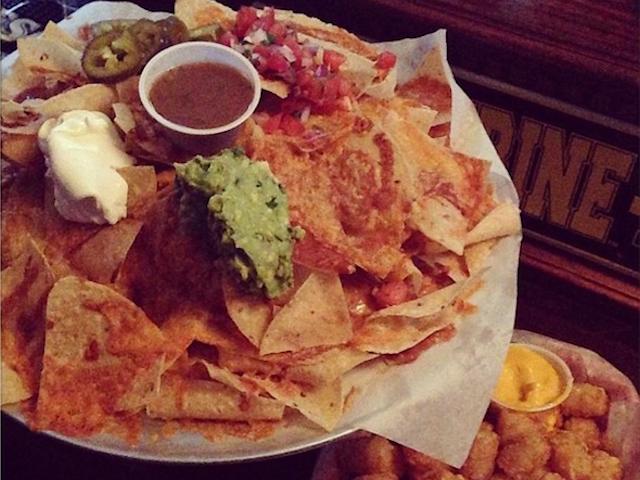 PROFESSOR THOM'S: We will never forgive Professor Thom's for pledging sports allegiance to the City That Shall Not Be Named, but luckily the Patriots are locked out of the Super Bowl and the rabid Tom Brady fans have dispersed...for now. And so, in this brief, blessed pre-Red Sox period, stop by this East Village bar for a (literally) killer plate of deep-fried mac and cheese ($6.95). Yes, deep-fried. Topped with cheese whiz or barbecue sauce, if you choose. If you're feeling particularly Satanic, the massive XL Nachos de Tomas ($18), loaded with cheese, beans, jalapenos and the like, will do you in. Pair with crispy battered onion rings ($5) or fries similarly drowned in cheese spray ($5) and pick up your LIPITOR® prescription in the morning. 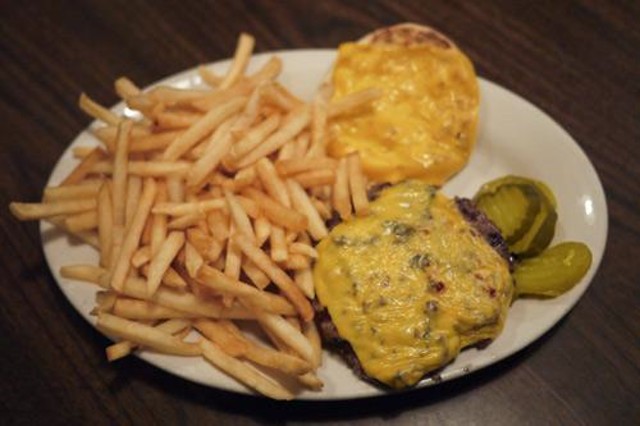 DUFFY'S TAVERN: This scruffy Staten Island watering hole has a cult following for their large, juicy burgers, piled high with cheese, bacon, veggies and whatever else you like atop your patty—even corned beef!. Also a standout, their Ribeye Steak Sandwich, served open faced atop a dainty piece of toast with fries and onion rings alongside. They're also super generous with the cheese here, whether it's a couple slices in your burger, a couple slices on your waffle fries (do this) or the ridiculously over-the-top gut bomb known as Irish Nachos. If you're just into snacking, they've got all the expected bar food like wings and mozzarella sticks, which go down even more easily with $2 pint of MGD and some saucy conversation with the old timers who camp out at the bar. (Nell Casey)