The 9 Best Cheese Shops In NYC

Cheese might be killing us one curd at a time, but it's also well-nigh irresistible, whether you prefer it semi-soft, mild, stinky or creamy. And though some of us may spend a little too much time wading in the Velveeta sea, the top shelf stuff is readily available at the city's many top-notch cheese shops, stacked high with pungent wheels and wedges and lovingly curated down to each aged crumble. Here are a few of our favorites; as always, leave yours in the comments.

MURRAY'S CHEESE SHOP: Murray's has been a lifeline for the city's cheese connoisseurs since founder Murray Greenberg opened the original Greenwich Village shop in 1940. Here, knowledgeable cheesemongers hock a vast variety of creamy, stinky and curdled wares, which are stored beneath the flagship shop in a subterranean cheese cave labyrinth. You can find cheeses from all over here—the usual French camemberts, the Italian pecorino and rare parmiaggiano, the sheep cheeses from the British Isles, and more exotic offerings from the deeper dairy pockets of the world.

Murray's also holds cheesemaking and tasting classes for burgeoning turophiles, and their outpost at Grand Central Terminal is a perfect spot to purchase a pre-or-post-commute wedge or two. Most recently, the Murray's crew opened a cheese bar just a few doors down from the Greenwich Village store, where you can sample some of the cheeses and charcuterie in a more laid-back, sit-down setting. 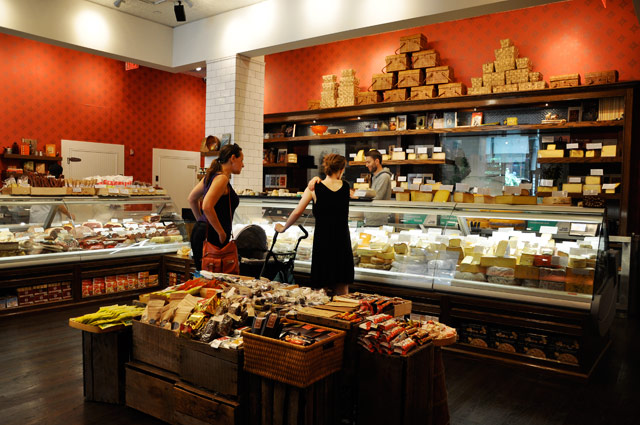 BEDFORD CHEESE SHOP: Don't let the stinky-feet smell blasting from both the Williamsburg and the newer Manhattan location of this bi-borough cheese store scare you away. Though it's a bit overwhelming upon first whiff, the ripe odor is merely a marker for the fine collection of dairy goods that line the shops' shelves. Both stores boast over 250 varieties of cheese, along with fresh breads, charcuterie and imported non-perishables; cheesemongers at both shops are quick to offer a sample or two, so if the selection seems too overwhelming, you can let your tastebuds do the picking. Prices can be steep—this is some fancy cheese, after all—but workers here know their stuff when it comes to brie, gouda and the like, and you'll leave with a quality hunk of something when you're through. 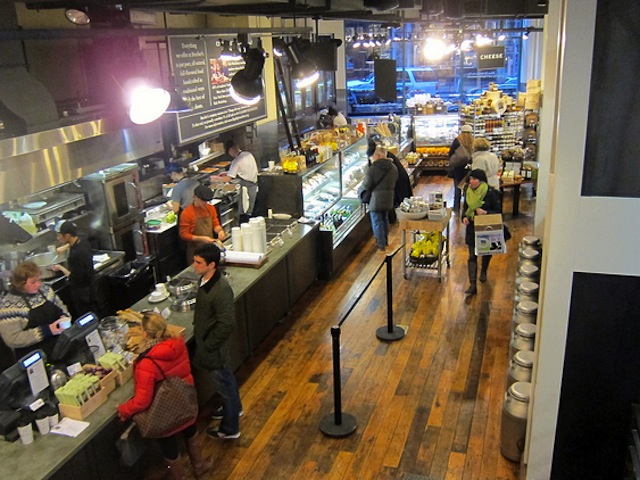 BEECHER'S HANDMADE CHEESE: Beecher's is a relative newcomer to the city's artisanal cheese scene, having just opened its Flatiron location in June 2011. But what the Seattle-based company lacks in longevity, it makes up in quality and entertainment value, since as the name suggests, Beecher's makes its own cheese, and shop visitors can watch workers whip up the goods. The cheese shop is upstairs, offering a variety of tasty artisan fresh-and-aged cheeses and charcuterie, and there's a counter where you can purchase daily sandwiches like fig-and-cheese and simple grilled cheese.

Downstairs, Beecher's restaurant and bar serves booze and dairy delicacies; stop by their happy hour (weekdays from 3 to 7 p.m.) for deals on wine and their famous "World's Best" mac 'n' cheese ($11).

Beecher's Handmade Cheese is located at 900 Broadway between 19th and 20th Streets in Flatiron (212) 466-3340, beechershandmadecheese.com). Follow them on Facebook. 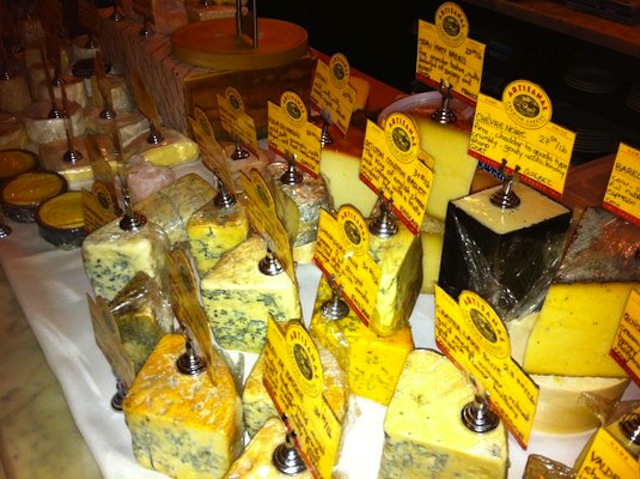 ARTISANAL FROMAGERIE, BISTRO AND PREMIUM CHEESE: The name is pretty sigh-worthy, but we swear this isn't another overwrought bespoke foodie trap. The bistro's cheese counter, curated by Maître fromager Max McCalman, boasts over 200 varieties of cheese, with everything from Oregon blue cheese to Spanish ibores to Dutch Geit-in-Stad, available over the counter or by delivery order.

More impressive than the actual cheese catalog, though, are Artisanal Premium Cheese's selection of classes, which range from the beginner's Cheese and Wine 101 ($75) to sultrier Sexy Cheese and Sumptuous Wines ($75) to daylong master classes for professional cheesemongers and sommeliers ($900). The 90-minute tasting courses are accompanied by a half hour of schmoozing, fondue and sparkling wine, so you can rub shoulders with your fellow cheese enthusiasts while you feast. 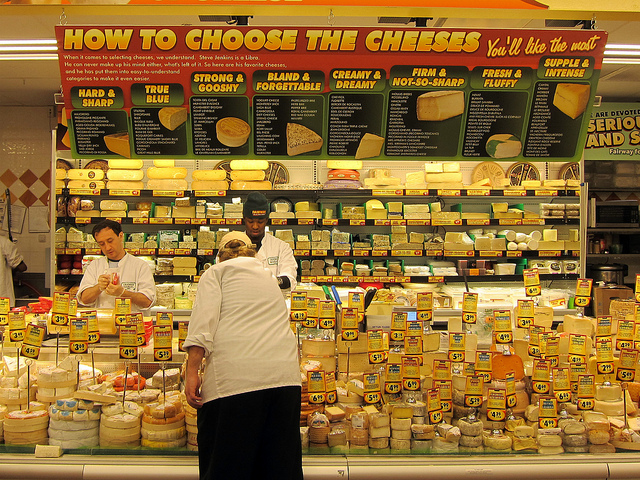 THE CHEESE COUNTER AT FAIRWAY MARKET: We're sort of cheating the system with this one, since Fairway is a little more all-encompassing than your average cheese shop. But the venerable gourmet grocery chain's vast collection of cheese (600 varieties, all curated by cheese poet Steve Jenkins) at each of its various locations is worth a mention in this list. When a new cheese makes its way over to the States from the wilds of New Zealand or the cultured depths of the French countryside, Fairway will probably stock it first, and sell it for a little cheaper than one of the smaller shops in town.

And the cheesemongers at Fairway's counters are just as knowledgeable and passionate as the ones working the boutique stores, too. Yes, you should support the mom-and-pop shops too, but if you happen to be pushing a cart around Fairway and get a hankering for some Iberian Tortal del Casar, you're in good hands.

Fairway has locations all over the city, including on the Upper West and East Sides, in Midtown East and in Red Hook, Brooklyn; for more details, visit fairwaymarket.com. 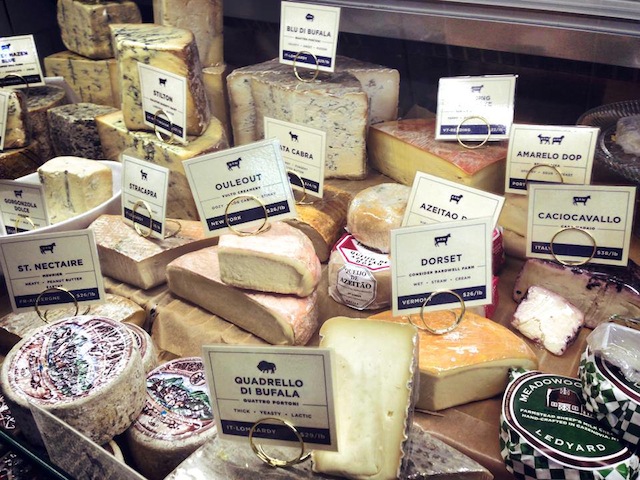 CAMPBELL CHEESE & GROCERY: This Williamsburg cheese shop just opened at the beginning of the summer, but it's already made quite an impression on us. The lovely neighborhood shop is owned by sisters Erin and Alana Campbell, who, along with a few friendly local cheesemongers, sell everything from cheese to beer to Southern-inspired household goods. The cheese selection is small, but carefully curated, with a solid washed-rind stinky cheese section and special batches from local cheesemakers with whom the shop has a relationship—they just got a unique batch of Pleasant Ridge Reserve from Wisconsin, for instance, and new cheeses come in regularly.

They've also got a selection of craft brews available for purchase, like Freigeist Abraxxxas and Evil Twin Molotov Cocktail, plus tasty sandwiches and goods from both local establishments like Ovenly and the Campbell's native South.

Campbell Cheese & Grocery is located at 502 Lorimer Street between Ainslie and Powers Streets in Williamsburg, Brooklyn (718) 387-2267, campbellcheese.com). Follow them on Facebook. 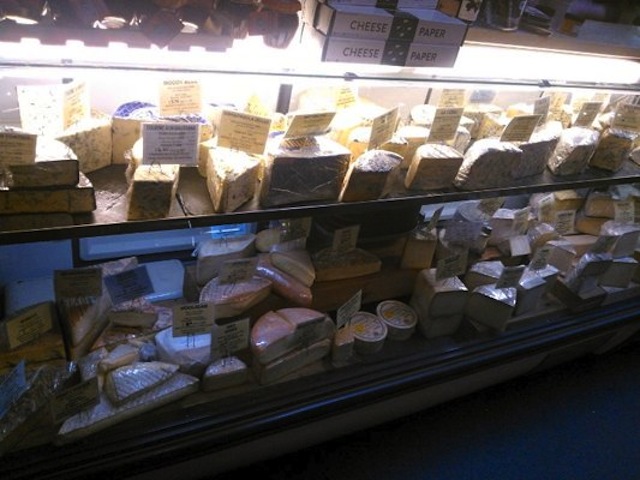 STINKY BKLYN: It might not have the most appetizing name, but this Cobble Hill cheese spot is one of our favorites in Brooklyn, stocking plenty of cheese, charcuterie and baked goods for gourmet connoisseurs. Stinky's doesn't have the same wide variety as some of the other shops mentioned, but they still have plenty of specialty cheeses from all over the world, in addition to locally-made cheese and Brooklyn-centric goods like McClure's Pickles and Mast Brothers chocolate. For carbo-loaders, there are lots of breads and pastries for sale, like thick doughnuts and salty pretzel rolls (our favorite!).

And if you like to pair your cheese with something hoppy, they've also got beer, selling growlers of local (and imported) brews from the likes of Sixpoint and Bronx Brewery for $15-$18, or you can bring your own growler in for a filler-up; Stinky's also sells a whole host of bottled beers, including bottled offerings from Sessions and Brooklyn Brewery.

Stinky Bklyn is located at 215 Smith Street between Baltic and Butler Streets in Cobble Hill, Brooklyn (718-522-7425, stinkybklyn.com). Follow them on Facebook. 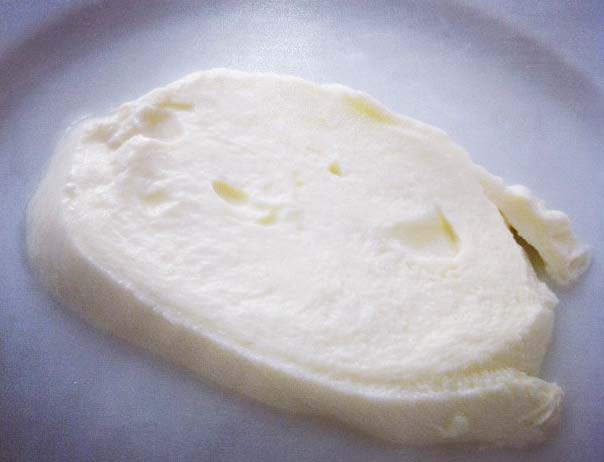 CASA DELLA MOZZARELLA: We raved about Casa Della Mozzarella's fresh mozzarella just about a year ago, and we're going to do it all over again, because it's the best. The bocconcini—small balls of mozzarella cheese—and hand-pulled large mozzarella balls are soft, creamy and made right in the back of the store, though they taste like something straight out of a Neapolitan latteria. The shop itself is just off the hallowed Italian food strip of Arthur Ave, and it's been whipping up mozzarella for generations, so you know you're getting the real deal; Casa Della Mozzarella also sells meats and other Italian goods, plus you can get sandwiches made up with the signature velvety cheese. Expect long lines filled with locals and foodie travelers alike, but the mutz is well worth the wait. 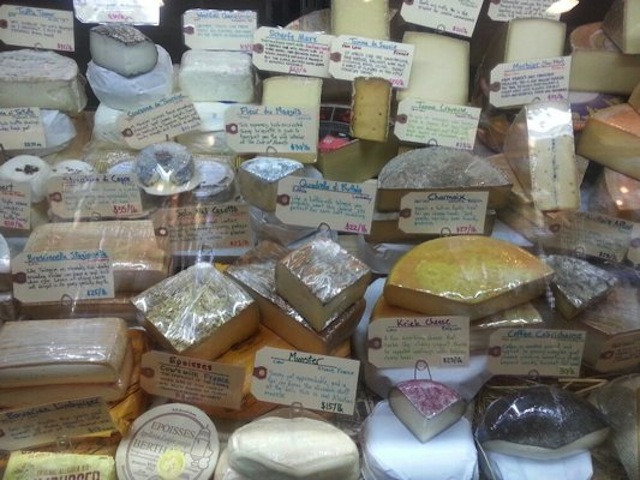 Astoria Bier and Cheese (via Yelp)

ASTORIA BIER AND CHEESE: Part cheese store, part craft beer bar and restaurant, Astoria Bier and Cheese opened about a year ago, spearheaded by the folks behind popular neighboring wine shop Astoria Wine and Spirits. The neighborhood's first full-service cheese shop, the spot serves up a variety of rinds and the like, ranging from basic cheddars to specialty and imported cheeses. Unique offerings include the "18-Watt wavreumont" ($23/lb), a Belgian trapist-style cheese made out of raw organic cows milk that they age in-house and wash with IPA from Single Cut Brewery in Astoria. They've also got a wide selection of craft brews to sample, and cheesey sandwiches and plates to snack on when you're done picking out your goods.