Invented in Taichung, Taiwan in the '80s, the tea-based drink can now be made in a variety of ways. The delicious drink can come as a fruit tea or a milk tea. The most common flavors for milk tea are plain black tea or taro, which is known for its vibrant purple color with a flavor like sweet potato with mild notes of vanilla. The most iconic bubble tea topping are tapioca balls, which are both soft and chewy, with a subtle sweetness. Other popular toppings include colorful assorted jellies and popping bubbles, which are orbs comprised of a gel-like skin with juice that bursts when bitten.

Bubble tea's been a city staple for over a decade. Here are my favorite spots to grab bubble tea in NYC. 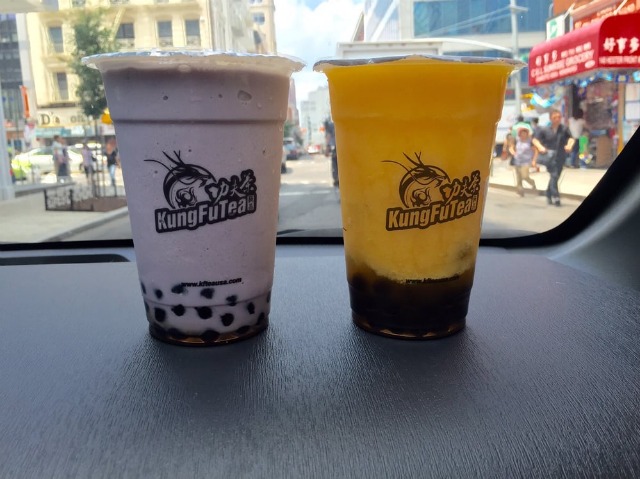 KUNG FU TEA This New York-based chain is a favorite among bubble tea fanatics and is found in multiple boroughs. Kung Fu is known for its extensive and fully customizable menu of beverages. Customers can adjust the ice and sweetness levels of their teas according to their preference from 0% to 100%. Dairy-free milk powder is used in Kung Fu's drinks, making it a great option for vegans and those who can't tolerate lactose.

The Winter Melon Milk Green Tea is a popular choice. Winter melon is a vine-grown fruit widely cultivated all over Asia, and the drink itself is fruity and creamy. Try it out with Kung Fu's grass jelly topping to add an herbal sweetness and earthy flavor. The Yogurt Grapefruit Juice is also very good, cool and tangy, with a taste similar to that of Yakult, a probiotic drink that can be found in most Asian supermarkets.

Kung Fu Tea has locations all over the city. 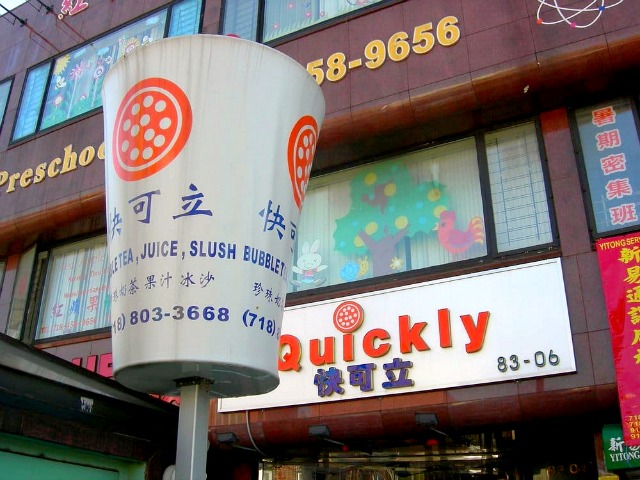 QUICKLY Even though it's called Quickly, everyone refers to it as "Quickly's." It is one of the oldest and cheapest bubble tea establishments around and is accessible price-wise, especially because of its student discount. As a pre-teen, I would appease my craving for the bubbly drink there almost everyday after class.

Quickly is also one of the largest tapioca milk tea franchises in the world, with over 2,000 locations in Asia, Africa, Europe and North America. Grab a hot Thai Milk Tea with tapioca balls or a cold Green Apple Fruit Tea with aloe jelly and Quickly's cheap fried squid balls. 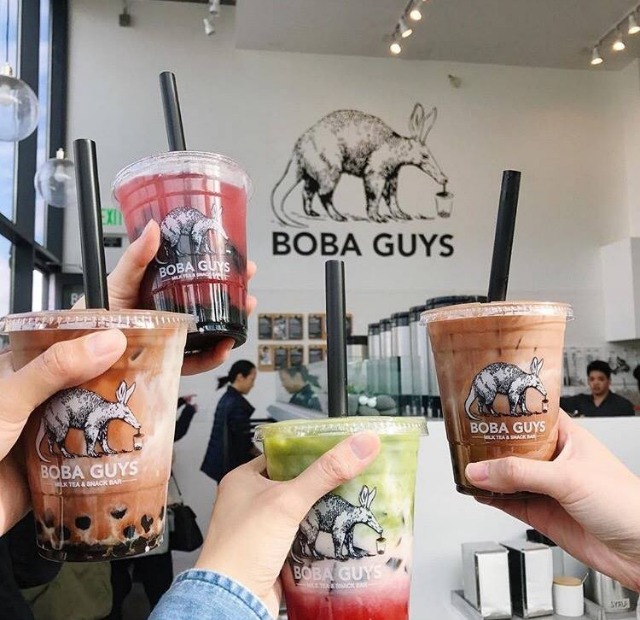 One of Boba Guys's most iconic beverages is the Iced Matcha Latte, where the layer of matcha is separated from the layer of milk for aesthetic purposes. Boba Guys also offers modern flavors, such as their cinnamon-packed Horchata, which hearkens back to their Mission District roots, where a large Mexican and Latin American population can be found. Even though the East Coast is already inundated with countless bubble tea spots, Boba Guys sets themselves apart for their innovative beverages made from high quality ingredients.

Boba Guys is located at 23 Clinton Street, Lowe East Side 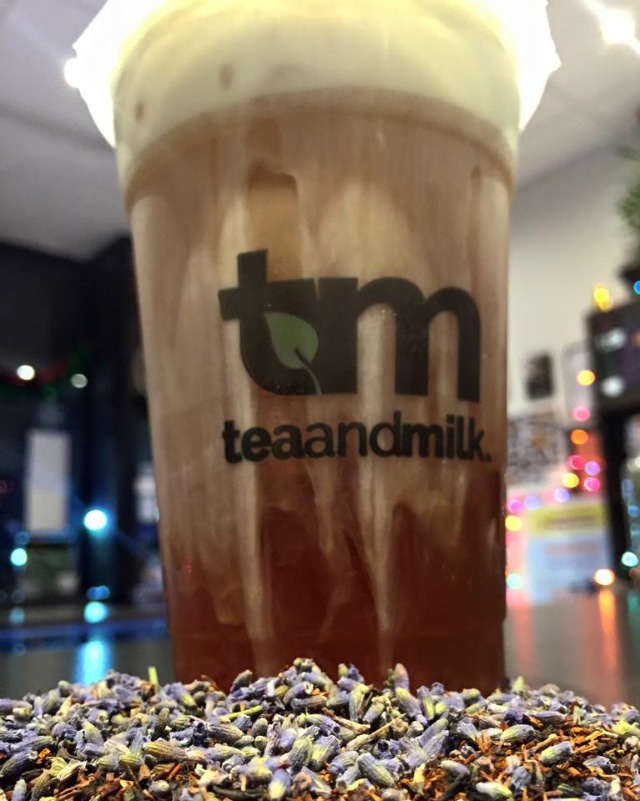 TEA AND MILK Tea and Milk commits time and effort in concocting unique, healthy beverages that are made with care. The company reinvents bubble tea by serving traditional teas sourced from all over the world, including India, Africa and Japan. The teas are given a modern twist by instilling them with natural ingredients such as flowers, fruits, roasted rice, roots, and spices. The teahouse uses their own homemade syrups and also locally sources their milk from Battenkill Valley.

Step in and indulge yourself in Roasted Oolong Tea and have it topped with T+M's signature cream. This special drink makes for an exceptional combination of a full-bodied flavor and fluffy cream. I highly recommend the Hibiscus Flower Peach Tea, made with hibiscus flowers baked with peaches. Brewed in white tea, it is subtly sweet and mildly tart, perfect for when you need something relaxing and soothing. 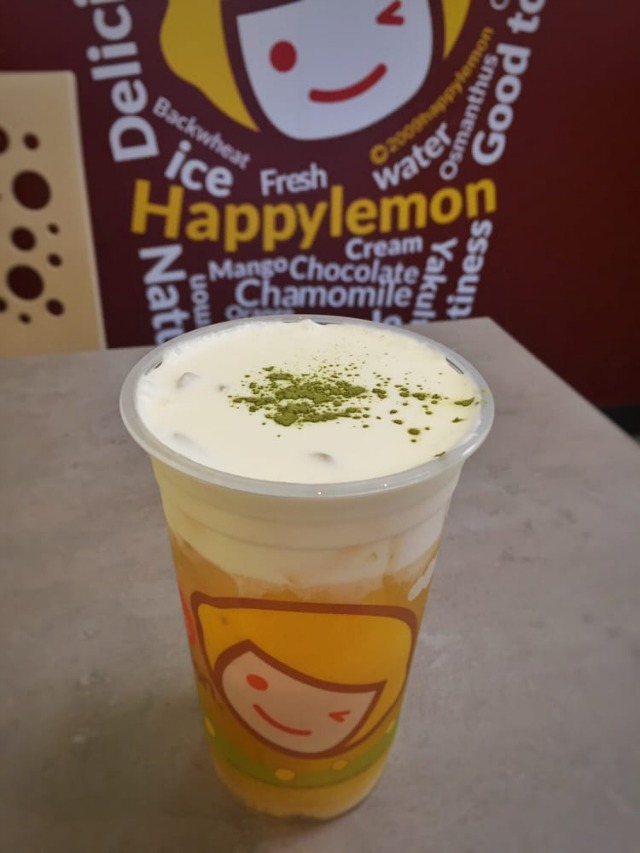 HAPPY LEMON The first time I had Happy Lemon was in the Philippines and I was instantly hooked. So when they opened a stall in the New York Mall food court, I bolted over from Brooklyn to Downtown Flushing so that I could relive one of my fondest memories. Happy Lemon is an international bubble tea chain that has 500 branches globally. It specializes in lemon tea-infused drinks, but its signature beverages come from its "Rock Salted Cheese" series, which are teas topped off with an enriched cream cheese mixture that's been laced with salt.

My favorite bubble tea drink, by far, is their Green Tea Rock Salted Cheese. The green tea is delicate and pure tasting, while the cream cheese topping is fresh and frothy. When the two layers are merged together, they form a unique sweet/salty taste sensation. Another great drink is Happy Lemon's Mango Lemon Slushy—which is slightly sour and refreshing—made with mango chunks and real lemons. 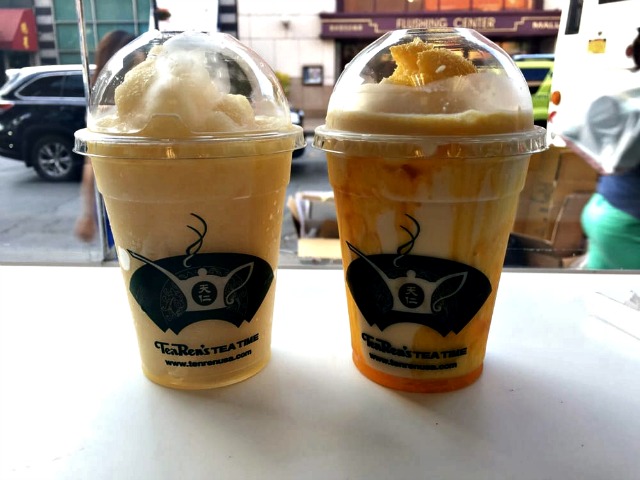 TEN REN TEA AND GINSENG Ten Ren, like Quickly, is an OG bubble tea chain; in fact, they claim to be the very first bubble tea cafe in NYC, established in 2000. Ten Ren is also a longstanding tea supplier that distributes its reputable teas worldwide. They sell their teas by type (White, Green, Pouchong, Oolong, King's, Black, and Pu-Erh) and categorize them by quality, from 1st (the best) to 4th. Ten Ren's teas are lightly sweetened and mellow in taste, and canned evaporated milk are used in milk teas. The cafe employs cocktail shaker machines to combine its tea with other ingredients, so you can be sure that you will get a well-blended, foamy drink.

Its Taro Milk Tea is made from real pureed taro root, contributing to its noticeable chunkiness and somewhat grainy texture. Ten Ren's Black Sugar Milk is a dessert-like treat; make sure you get it with egg pudding to make it extra decadent.

Ten Ren Tea and Ginseng has multiple locations in NYC. 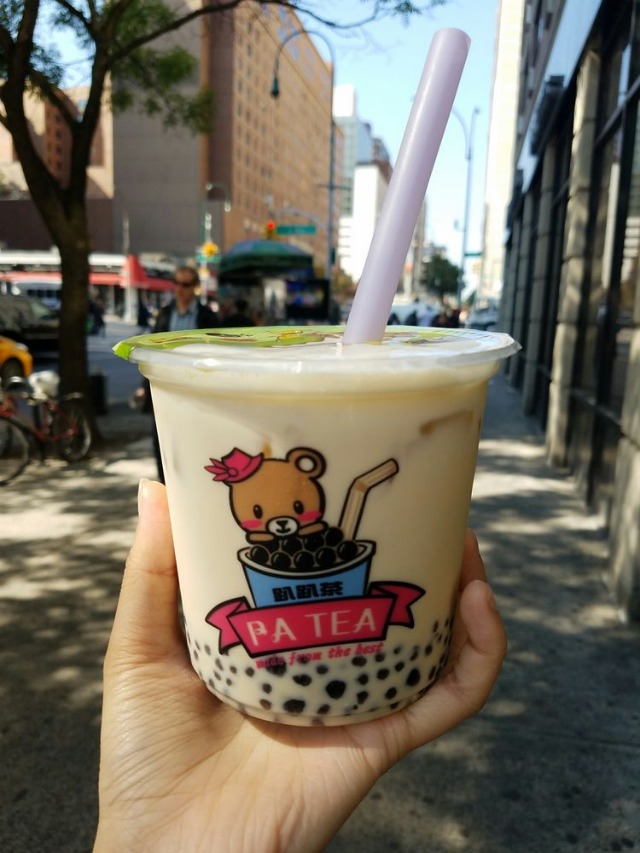 PATEA BUBBLE TEA PaTea differentiates itself from most other bubble tea joints in NYC by offering mini tapioca balls as a topping and 26 oz. stubby ("short and chubby") cups as a size option. The mini tapioca balls are easier to drink than the regular size, which require regular stops for chewing. The stubby cups are pretty damn cute, too, and if you drink as much bubble tea as I do, 26 ounces is an ideal amount.

PaTea's Rose Milk Tea is smooth, fragrant and has a noticeable floral flavor without tasting like a perfume bottle. The Mango Ice Cream Swirl is half vanilla ice cream and half mango slush with traces of mango pulp. Once the halves are combined, the beverage tastes almost like a creamsicle. 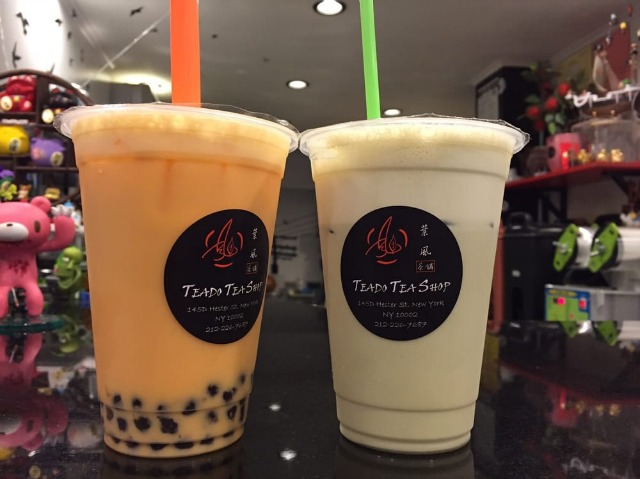 TEADO TeaDo is a family-owned bubble tea cafe in Chinatown that is decorated with anime figurines and Marvel superhero action figures. You can choose the level of intensity you want your tea to be (light, medium, or regular), the way you want it served (hot, cold, warm, ice, no ice), and you can also opt to modify the sweetness of your tea. They also use lactaid milk, which lends a thicker texture and distinct sweetness to their milk teas. The "tearista" gives you a small sample cup of your freshly made drink to ensure that you are happy with its taste and so they can accommodate if needed.

I suggest the Coffee Clouddo, which is a bold coffee-flavored milk tea topped with a layer of Teado's house-special whipped cream, turning it into a rich, velvety drink. Also try out their onigiri, which are Japanese rice balls with various fillings such as eel, masago (fish eggs), dried pork, or baby octopus, all made to order and served with one-time use gloves for clean snacking. 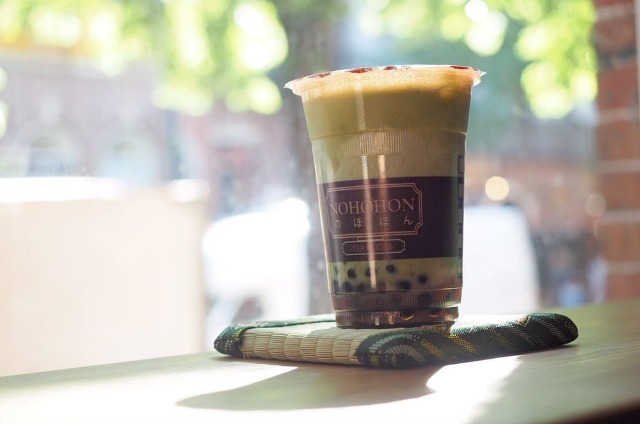 NOHOHON TEA ROOM NOHOHON Tea Room is a small, intimate Japanese-style bubble teahouse in the East Village that specializes in matcha-based bubble teas. The teahouse uses organic ingredients, all imported from Japan, that are vegan-friendly. In fact, NOHOHON provides only lactose-free bases and is also sugar-free. The menu is short and only two toppings are available: tapioca balls and adzuki beans. The matcha is hand-crafted, made with a bamboo whisk (chasen) and a tea bowl (chawan) like at a traditional Japanese tea ceremony.

The Furano Field is a matcha latte that incorporates hints of lavender that adds a pleasant aroma. Since NOHOHON brews up authentic matcha—unlike the pre-sweetened, diluted stuff sold at some other bubble tea spots—the intense flavor may be overwhelming to those who are not accustomed to its natural bitterness. The drink is presented in layers, but you are advised to shake it so that all the flavors meld together.

NOHOHON (say that five times fast) may be pricier than most other bubble tea joints, but the experience and tea are top notch.

#best of gothamist
#Boba
#bubble tea
#Tea
#original
Do you know the scoop? Comment below or Send us a Tip