The 8 Best New Doughnuts To Eat On National Doughnut Day (And The Day After That...)

The greatest of all fake holidays, National Doughnut Day, is nearly upon us—on Friday, June 1st, you are obligated to celebrate the doughnut by indulging in at least one. While we still stand behind our "Best In NYC" list of two summers ago—all these places are still open, and all are still strong—there have been some key newcomers to the scene since then, as well important additions to the lineup of several doughnut icons around town. Here then, are eight excellent doughnuts, in a variety of styles (from elegant to slightly unhinged). 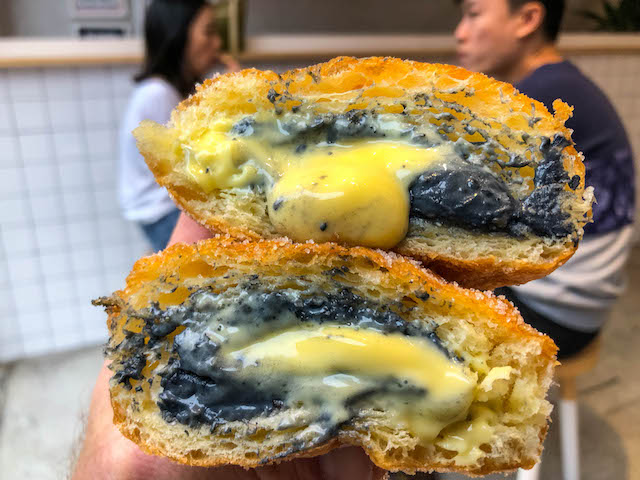 Supermoon Bakehouse A spinoff of culty San Francisco favorite Mr. Holmes Bakehouse, Supermoon was so slammed when it first opened on the Lower East Side last fall that it was hard to get there early enough to actually eat any of their famous filled pastries before they sold out. Things have calmed down a bit—when I went last week, mid-afternoon, everything was still available—so if you haven’t yet been, now’s the time. Because although I joke that these doughnuts are really more pudding than pastry, relying heavily on the thick, creamy insides for much of the excitement, the soft, brioche-y exterior is also quite good, with a crunchy sugar coating adding further sweetness and a bit of textural counterpoint. Just ignore the Insta-bait decor and slogans (“Bite Me NYC”? I don’t think so SF), and enjoy.

Located at 120 Rivington Street between Essex and Norfolk (supermoonbakehouse.com) 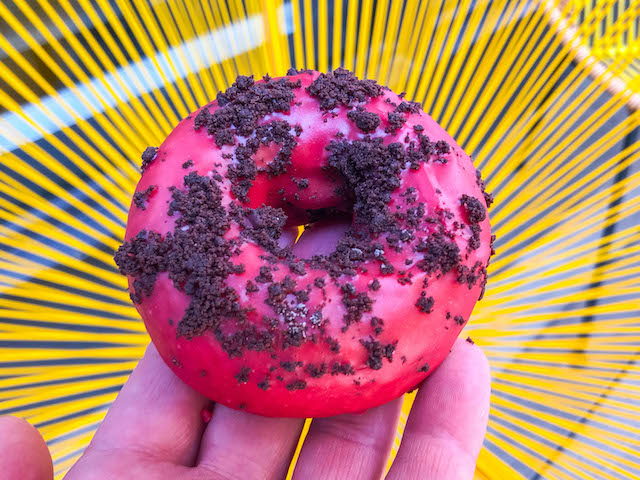 Du's Donuts It seemed a bit odd at first that Wylie Dufresne's big follow-up project to his seminal restaurant wd-50, and then the playful Alder, would be a straight-up doughnut shop, but apparently the molecular gastronomy icon grew up in his great-grandfather's diner in Rhode Island downing a diet of American classics, so maybe Du's Donuts has been in his heart all along. After a successful pop-up in SoHo last fall, Du's has now settled into its trendy digs at the William Vale Hotel in Williamsburg, and though you can now get a couple of Dufresne's iced, brightly-flavored, cakey delights in Whole Foods, take a trip to the mothership to sample the full variety. 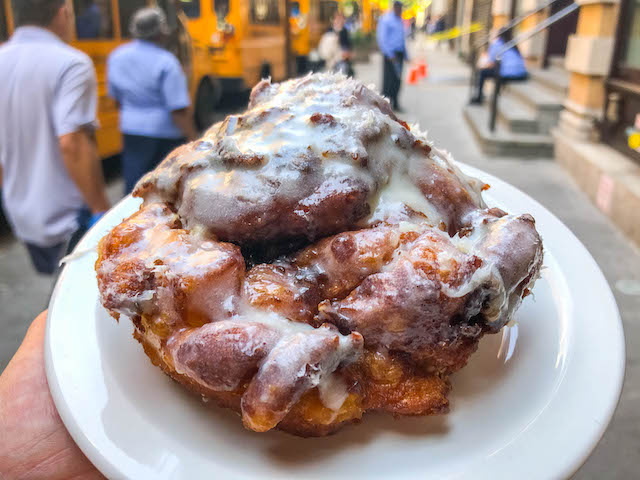 Caffe Marchio Danny Meyer didn’t know that scaffolding would almost immediately throw his shiny new Roman coffee shop into a state of airless gloom, but the current grim vibe at Caffe Marchio, located off the lobby of the Redbury Hotel and adjacent to Meyer's popular Roman pizza place Marta, shouldn't deter you from stopping in for chef Jess Weiss's amazing Apple Fritter Doughnuts. The buttery, craggy pastry is filled with chunks of apple and plenty of cinnamon, but the genius move is the tangy cream cheese icing, slathered on with appropriate abandon. Weiss's other doughnuts, in flavors like Chocolate-Dipped Strawberry and Chai Sugar, are also really good. 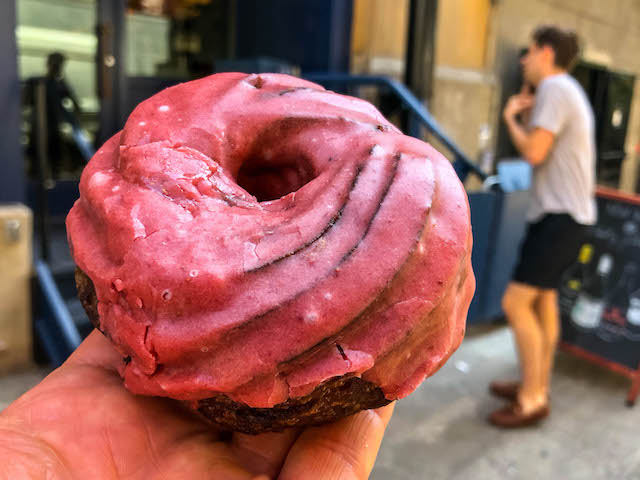 Daily Provisions Danny Meyer's other new coffee shop, this one next door to his flagship Union Square Cafe, is Daily Provisions, and here too you'll find some great pastries (not to mention the city's only scoops of the superb Salt and Straw ice cream). All of the crullers on offer are spectacularly fresh (with so much buttery grease you could even call them juicy), and you'll find a lovely caramelization on the exterior. Then comes the glaze, usually either maple or, in its newest iteration, a remarkably tart and sweet strawberry. And it's scaffolding free, so you can sit on one of the benches outside and relax a bit. 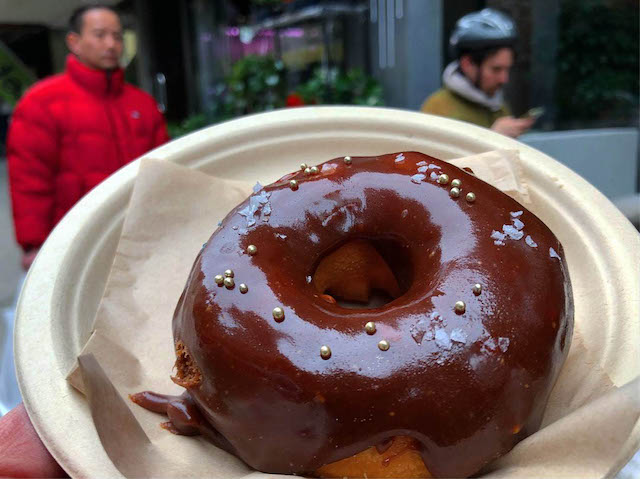 Alimama Just when you thought there was no more experimenting to be done with the doughnut (is there a better blank pastry canvas with which to work?), along comes the tiny, stylish tea shop Alimama, sitting in the heart of Chinatown and serving up these mochi-based (and, thus, gluten-free) beauties. The texture is heavenly, all moist and chewy, they're almost shockingly sweet, and they come in such "modern" flavors as Salted Caramel Nutella and Matcha Glaze with Toasted Rice Krispies. 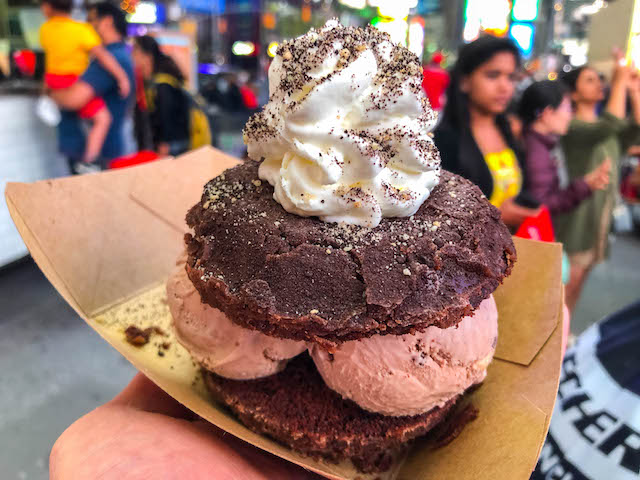 Underwest and Ice and Vice: Not Just Black and White, $10. (Scott Lynch / Gothamist)

Underwest is one of the city's best donut shops, and Ice & Vice one of our best ice cream parlors, so what could be better than this insanely good Not Just Black and White sundae collaboration, available only at the latter's Times Square kiosk, I Scream! Underwest contributes a dense, intense Dark Chocolate Donut, which your friendly servers will cut in half, stuff with three mini scoops of Ice & Vice's sensational new Black n' White Cookies And Chocolate Cream ice cream, then top the whole thing off with whipped cream and a sprinkling of cookie crumbs. Yes, it's totally worth wading through the Times Square hordes to eat this masterful creation. And remember: 5% of all sales at I Scream! go to one of four rotating charities.

Located on the Broadway pedestrian plaza between 43rd and 44th Street (iscreamtsq.nyc) 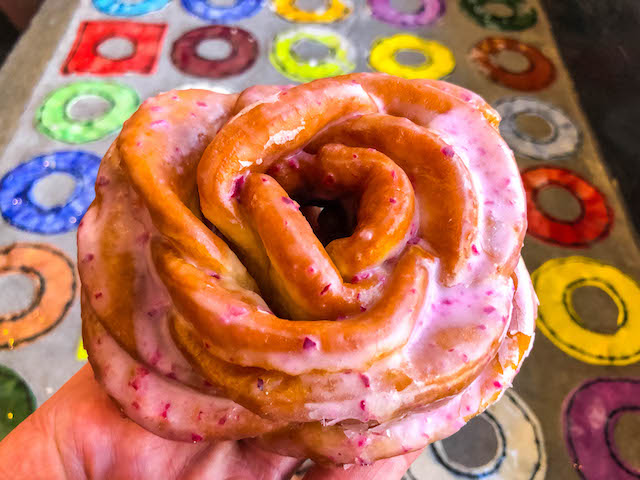 Doughnut Plant is definitely not new—Mark Israel's been frying these babies up here in NYC since 1994, and his family's contribution to the genre goes back generations-but this justifiably popular mini empire keeps innovating. Witness the introduction last year of the excellent Doughflowers, glazed yeasty treats that make for a thoughtful gift-giving alternative to boring old regular bouquets. Rose is my favorite, plus everything else they sell here. 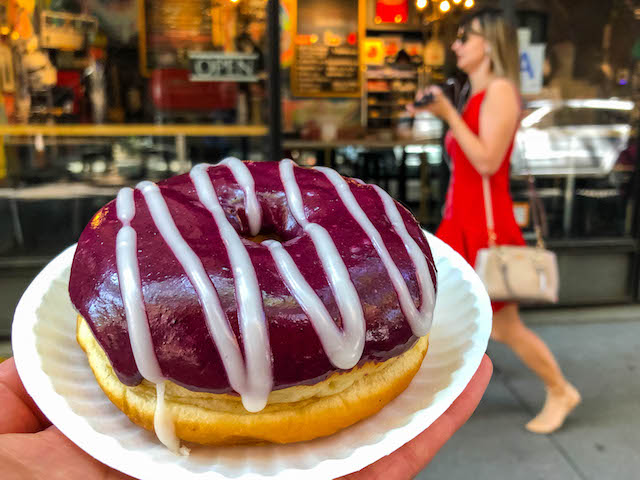 Doughnut Project Troy Neal and Leslie Polizzotto have a knack for making the craziest-sounding doughnuts taste really good—the Bone Marrow, the Everything, the Bacon; these Doughnut Project menu regulars are all excellent—a skill that really comes into play with their Restaurant and Cocktail Series, collaborating with local chefs and bartenders. To take just one example: the squash-filled Gramercy Tavern Doughnut, with a charred green grape glaze, fried capers, and a crispy squash chip. Usually released on Fridays and available for one weekend only, these creative collabs are announced on their Instagram, so follow them there.

Located at 10 Morton Street between Bleecker and 7th Ave South, and 912 7th Avenue between 57th and 58th (thedoughnutproject.com)

#best doughnuts
#best of gothamist
#donuts
#doughnuts
#national donut day
#original
Do you know the scoop? Comment below or Send us a Tip