The 8 Best Mac & Cheeses In NYC

It's a fact that if there is mac & cheese listed anywhere on a menu, I have to order it, which is to say I've eaten a lot of mediocre helpings in my life. But let's be real: even the worst mac & cheese is still pretty delicious. Besides grilled cheese and pizza, is there a more perfect harmony achieved between carbohydrates and dairy? And while a pint of Easy Mac can get the job done quick, sometimes the mood calls for a homemade, oven-baked forkful of molten cheese and noodles. Below, a few of our favorite spots to indulge in during our mac attacks; be sure to tell us where to head next time in the comments. 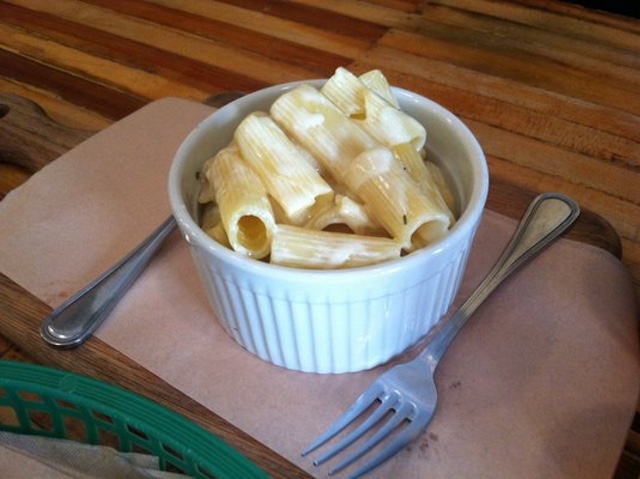 EARL'S BEER AND CHEESE Sure, there's almost always a wait, and even if you do find a spot at this minuscule East Harlem joint, you'll likely have a neighbor's elbow in your face. But all of that fades away a single bite into their luscious Mac & Cheese ($8), which comes scratch made to order (no steam table scoops here) in a darling ramekin. Instead of the common cheddar or Alpine-style cheese, they're using goat cheese, which imparts a touch of tang and a super creamy sauce to coat the large rigatoni noodles. They're also tossing in a pinch of finely chopped rosemary, adding a woodsy zip that really wakes up the cheese and heavy cream. 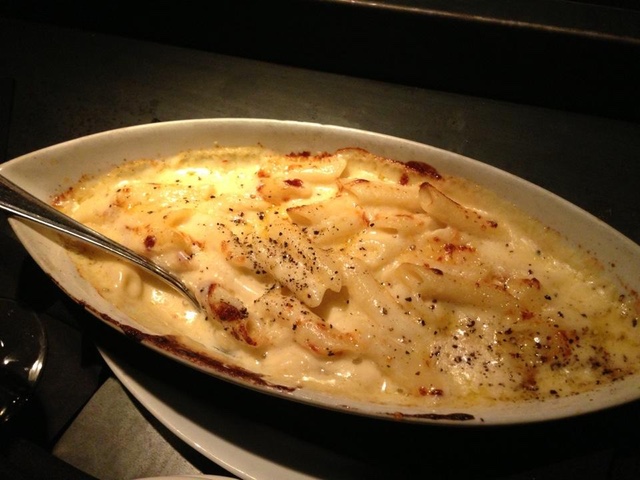 BEECHER'S If making cheese is your gig, then you better know how to use it, especially if you're going to dub your mac & cheese the "World's Best." Having not eaten every mac & cheese on this planet, we can't back up this Flatiron cheese shop's claim, but it's pretty darn good. Penne noodles are encased in a molten mixture of the shop's homemade Flagship (a cheddar and gruyere hybrid) and Jack cheeses, bound together with cream and finished in the oven.

At their downstairs eatery The Cellar, macs can be further enhanced with things like pork belly and pickled fennel stem ($15), crab, Old Bay aioli and bread crumbs ($16) or balsamic mushrooms and fennel ($16). But their simply prepared original is worth a try on its own, as it lets the flavors of the cheese really shine through. Grab a crock downstairs for $12, or a cup to go at the cheese counter; an eight ounce serving runs $6.50, a 16-ounce serving runs $10.50. They also offer their original mac frozen for when the Night Cheese cravings strike.

Beecher's Handmade Cheese is located at 900 Broadway at 20th Street in the Flatiron (212-466-3340, beechershandmadecheese.com) 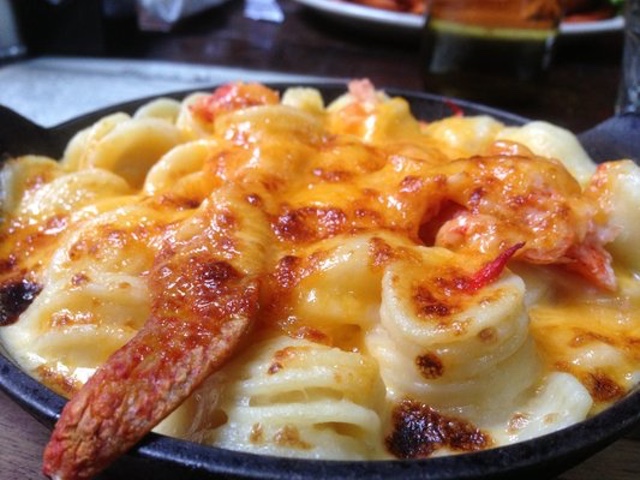 BLACK SWAN Mac n' cheese works best when it's filled with all sort of culinary non sequiturs. What's this kale doing in here? Is that a beet? A partially eaten burrito? Yep that's fine, throw 'er in. Turns out there's very little you can't combine with cheese and pasta. Black Swan is particularly adept at furnishing their already perfectly suitable mac n' cheese with tasty extras—sun dried tomatoes or jalapeños for $2, bacon for $3, fresh lobster meat for $7. Unadorned mac is $10—it's creamy, hearty, and makes a lifesaving chaser after all the craft cocktails you poured into your empty stomach. (Lauren Evans)

Black Swan is located at 1048 Bedford Ave between Clifton Place and Lafayette Avenue in Bed-Stuy (718-783-4744, blackswannyc.com) 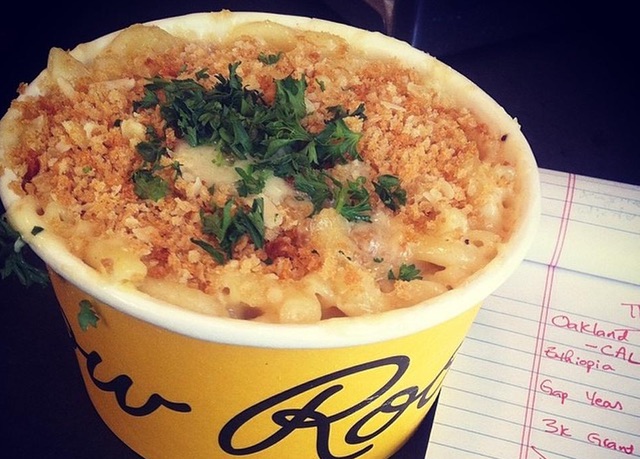 ELBOW ROOM Generally speaking, I'm not a huge fan of much tomfoolery when it comes to my mac. Gimme some noodles, some creamy cheese sauce, maybe some bacon and let's call it a day. But I'll make an exception for Elbow Room, who endeavor to fill their macs with as many food groups as possible and still manage to make everything cohesive.

Their Old School Mac—made with New York State Cheddar, a bechamel sauce and garlic breadcrumbs—can be amped up a few ways, depending on one's predilection. There's the Jamaican Jerk Mac with scotch bonnet, marinated chicken, grilled pineapple and toasted coconut or the Greek Salad with baby spinach, feta, cucumber, olives, red onion and a lemon-dill dressing. Most importantly, they do a killer Vegan Queso Fundido mac, with soyrizo, pickled jalapenos, tortilla chops, avocado and fresh cilantro. Macs run $4 to $18 depending on the size. 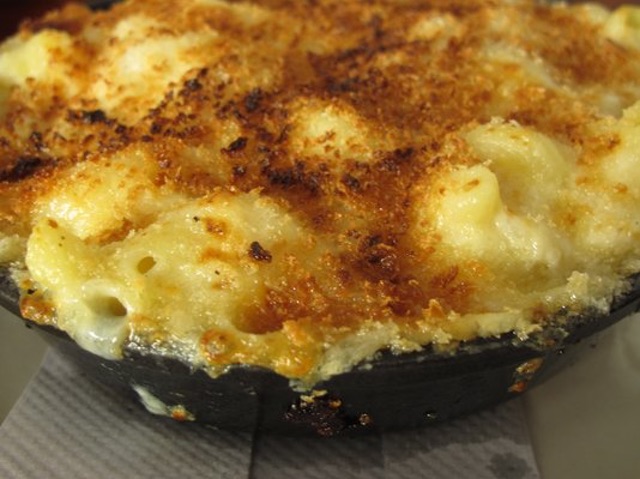 THE BROOKLYN STAR Be careful when the bubbling crock of Mac & Cheese ($9) arrives in its cozy cast iron vessel at your table; you'll want to dip in immediately and go to town, but be forewarned that third degree cheese burns don't do much for the tastebuds. And you'll want to taste this mac, meaty and smokey from the nubs of bacon, sharp and creamy from the generous cheese application. Add in the buttery breadcrumbs on top, which lend their crunch to a composed forkful and you have a little pan of nirvana for dinner. Or at brunch, when they also serve the dish. Just try to resist its siren's call over the that raw kale salad.

The Brooklyn Star is located at 593 Lorimer Street in Williamsburg, Brooklyn (718-599-9899, thebrooklynstar.com) 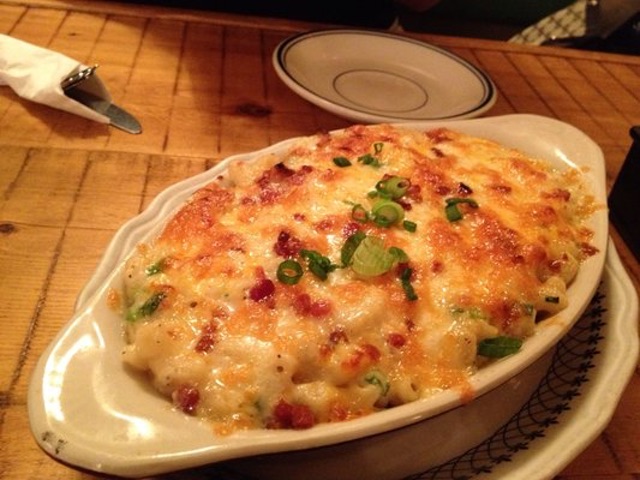 QUEENS COMFORT Good luck getting a table for brunch at this Astoria den of carbs and cheese, but things are usually a little quieter for dinnertime, where they offer two flavors of equally decadent mac & cheese. Carnivores can opt for the Bacon Scallion version ($14), a rich mixture of bechamel fortified with cheddar, fontina and parmesan cheeses, with nubs of salty bacon and zippy green onions in each bite.

For vegetarians, Truffle Mushroom ($16) with fontina, cheddar and a funky flavor that will bar post-meal makeouts for at least a few hours. If you do get in during weekend daylight hours, do not miss the deep fried mac & cheese known as Atomic Fire Balls ($8). For extra lily gilding, they're served with a side of ranch for dipping. 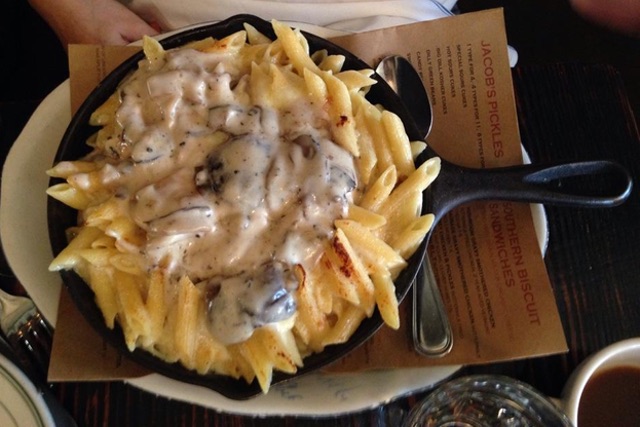 JACOB'S PICKLES We're not sure why this Upper West Side comfort food spot hasn't just set up complimentary cots in the back because it's not possible to leave without needing a nap ASAP. That's doubly so if you're opting for an order of their mac & cheese, which comes as a sneakily enormous side for $8 or mixed with mushrooms as an entree for $14. The head-sized entree version contains four types of cheese (aged NY State cheddar, Pecorino-Romano, American, mozzarella), which are brûléed for maximum meltage. On top, a creamy mushroom gravy. Just hope that Uber isn't on surge pricing, because you'll definitely need it to get home. 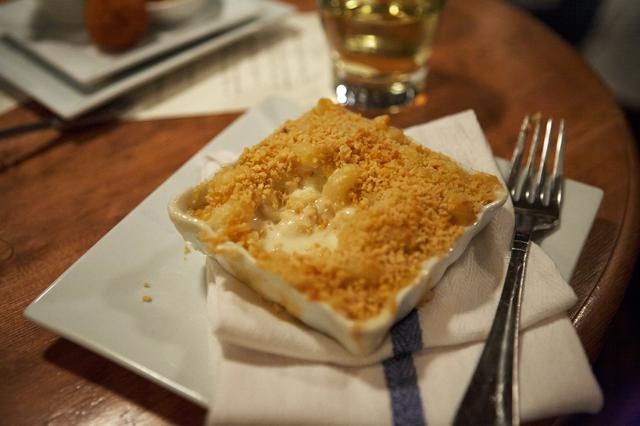 JACK THE HORSE TAVERN We've mentioned the mac & cheese at Jack the Horse before, and that's because the Brooklyn Heights restaurant serves up some of the best in the city. The portion is small, but rich and filling, and during happy hour it's only 5 bucks (and $9 all other times).

Owner and chef Tim Oltmans uses cavatappi pasta, and that's not the only aspect that sets it apart from lesser versions we've tried. Oltmans tells us, "We do have a couple of unique aspects to our Mac & Cheese. Instead of making a traditional béchamel we use grated potatoes to create what we call 'potato cream,' a thickened base to melt our 2 cheeses into. We also add a bit of Dijon mustard for a bit of spice. Smoked gouda gives a smoky flavor and keeps it vegetarian." Potato cream! That's a comfort food gamechanger. (Jen Carlson)

Jack the Horse Tavern is located at 66 Hicks Street between Middagh and Cranberry Streets in Brooklyn Heights, Brooklyn (718-852-5084, jackthehorse.com)

Honorable Mentions Of course Williamsburg's Pies 'n' Thighs does a ridiculous mac that's super creamy with a kick from some hot sauce. The gruyere, cheddar and smoked mozzarella version at Queens Kickshaw is baller. The Smoky Mac from Westville always gets snaps for cheese insanity.