The 8 Best Lobster Rolls In NYC

First, let's be clear here: lobster rolls, even the "cheap" ones you see at every market and festival these days, are very much a luxury item. (This wasn't always the case.) With prices ranging from $17 at a truck to $40 with tax and tip (and fries) at a full-service restaurant, I have little patience for lobster rolls with sub-par ingredients, half-assed plating, or a lack of balance among ingredients. These are five-bite sandwiches, and for this much money one of those bites better not be "all brioche." All of the lobster rolls listed below are not only delicious in and of themselves, but are also prepared and presented with enough love and attention to justify your indulgence. 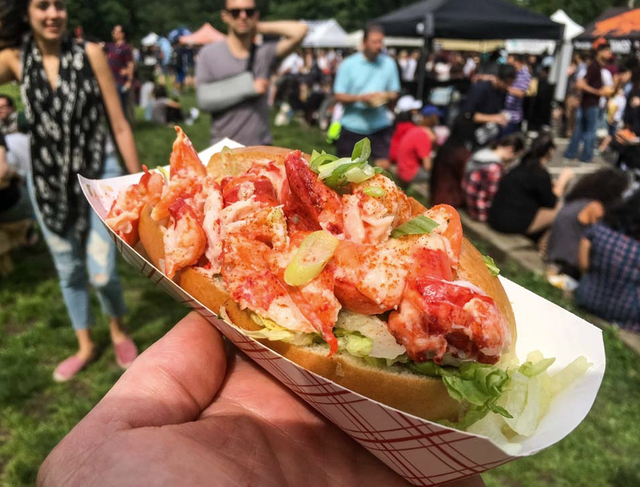 Red Hook Lobster Pound ($20 at Smorgasburg, pictured): Our amazing city's other great bargain-lobster outfit, Red Hook Lobster Pound, can be found at just about every event, market, or festival where Luke's isn't, and you'd be hard pressed to say which one is better. Red Hook mixes its meat with just a dab of mayo, and tempts disappointment by adding paprika and scallion but pulls it all off with aplomb. BONUS: the fantastic Fried Lobster Roll (with "lobster caramel") at Susan Povich and Ralph Gorham's new venture, Rockaway Clam at Jacob Riis Park.

Red Hook Lobster Pound (the mothership) is located at 284 Van Brunt Street between Verona and Visitation, as well multiple markets around town, including Smorgasburg and Urbanspace Vanderbilt (718-858-7650; redhooklobster.com) 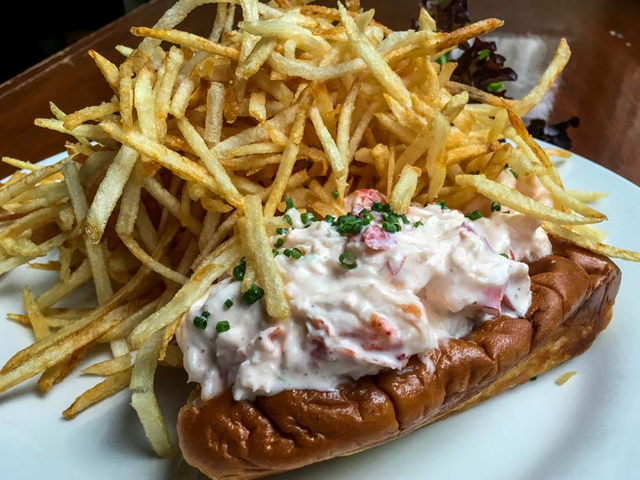 Pearl Oyster Bar ($33): Now celebrating its 20th year on Cornelia Street—which puts it squarely into "NYC classic" territory—Pearl practically pioneered the high-end-fish-shack game back in 1997, and continues to serve the best expensive sandwich around. And don't worry if the Pearl Lobster Roll looks too mayo-ed up for you! In this case, the intense creaminess complements rather than buries the big chunks of crustacean. The buttery bun's the exact right size too, and the crisp, salty shoestring fries are excellent. The perfect summer splurge, in an exceptionally pleasant and friendly environment. 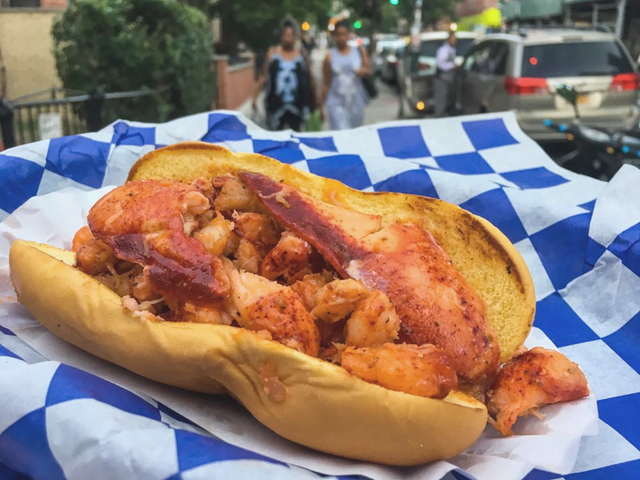 The Crabby Shack ($20): This Kickstarter-funded spot opened in Crown Heights just a few years ago, and though the vibe is low-key and the decor borderline kitsch, owners Fifi Bell-Clanton and Gwen Niles are serious about their shellfish. Crab dominates the menu, obviously, but the Lobster Roll is a marvel, somehow doing everything "wrong" but getting it all so right. The meat is served warm, for example, which is generally a tricky move, and there's more seasoning involved than is usually prudent, including the all too-often over-sprinkled Old Bay, but the kitchen shows a deft touch in all areas. This tastes like summer, and it makes me very happy.

Mary's Fish Camp ($34): I know I'm diving into feud-infested waters here, but let me start by saying that Mary's makes the second-best lobster roll in the West Village. Which still means it's very good, with those large pieces of sweet meat coated in mayo and exploding from a small, buttery bun. The small mountain of fries that comes with hits the spot as well. This place is always packed for a reason. 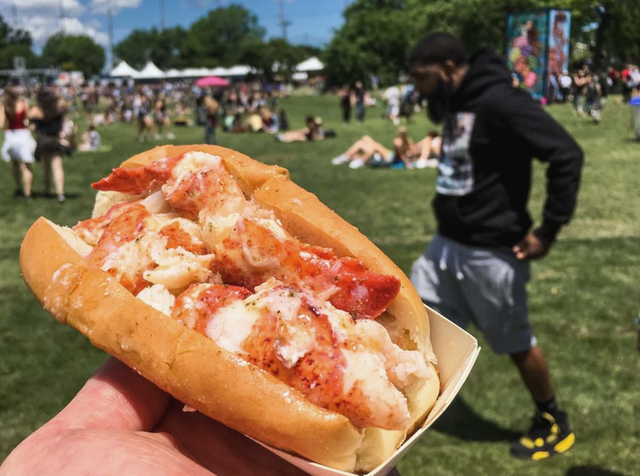 Luke's Lobster ($17): When Luke's Lobster opened in the East Village in 2009 it was a bit of a revelation. Here were high-quality, generously-sized lobster rolls, made for the masses! The price as gone up a bit since those $14 days (though not by much), and the single shack is now an bonafide empire, but the Luke's crew still puts its heart—and a full quarter pound of fat, tender claw meat—into these rolls, every single time. The Clam Chowder, by the way, is also superb.

There are at least 11 fixed Luke's locations in Manhattan and Brooklyn, and they're always popping up at markets and festivals (lukeslobster.com) 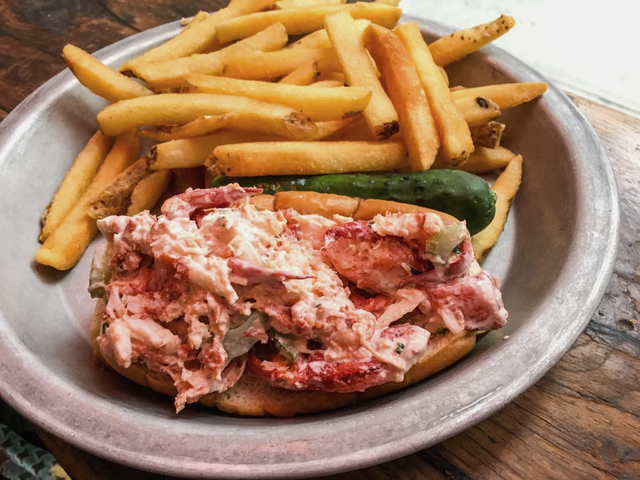 Lobster Joint ($21): Located near the northern end of Manhattan Avenue (and, thus, far away enough from the G to feel a bit locals-only), this charming seafood shack serves Greenpoint's best lobster roll. The Lobster Joint's New England version is just barely dressed with seasoned mayo, the rich, all-claw-and-knuckle salad spilling out over its simple, soft bun. Add a relaxed, welcoming attitude, a comfortable back garden, and a price that's doable (includes a whole pickle and decent fries), and this might be my overall favorite place in town.

Lobster Joint is located at 1073 Manhattan Avenue between Eagle and Dupont. There's also a stand at the Beach 97 concessions in Rockaway (718-389-8990; lobsterjoint.com) 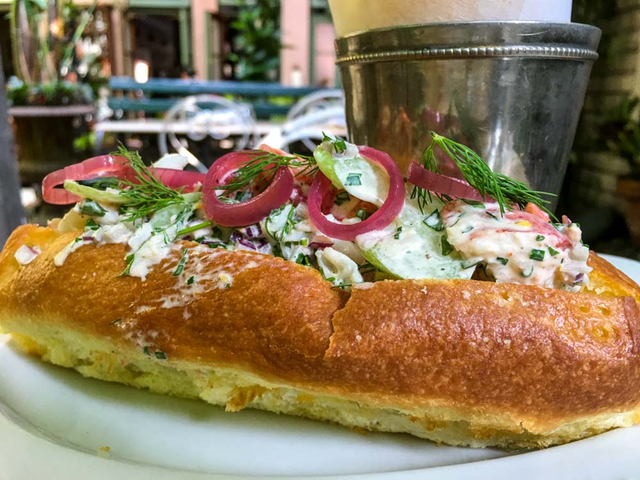 Maison Premiere ($26): Williamsburg's old-world charmer gets packed nightly for its absinthe cocktails and oyster happy hours, but if you can snag a seat consider adding one of these well-crafted Lobster Rolls to your boozy feast. Proving that there's an exception to every rule, Maison Premiere's crustacean sandwich includes oddities such as dill and pickled onions, and it's served on an alarmingly-large brioche bun... and yet when you're sitting in the lovely back garden, with depressing Bedford Avenue suddenly feeling far away, it all tastes so good, and adds a welcome heft to your meal 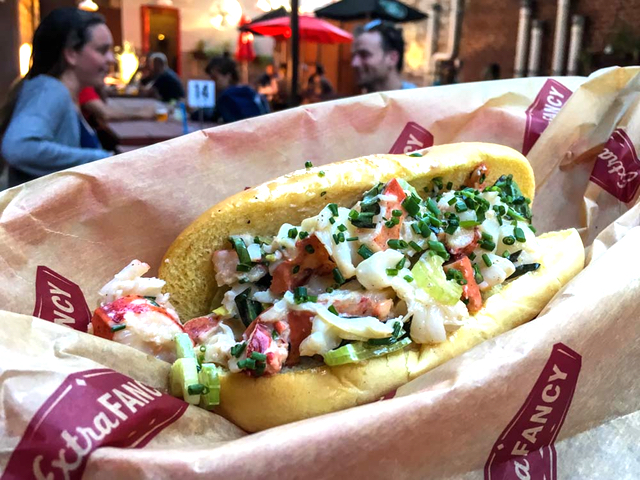 Extra Fancy ($29): If you prefer to eat your shellfish sandwich at a battered picnic table rather than a delicate wrought-iron number, the ironically-named Extra Fancy is the Williamsburg lobster roll destination for you. The recipe is straightforward--claw and knuckle meat, a bit of mayo, some chives and celery, a basic bun—but the lobster is freshly cracked, wonderfully tender, and full-flavored enough to satisfy all your crustacean cravings.

Extra Fancy is located at 302 Metropolitan Avenue between Roebling and Driggs (347-422-0939; extrafancybklyn.com)