Like pretty much everything in the comfort food category, this city has upped its fried chicken game these past few years, with all sorts of Southern or soul food-style spots popping up alongside the city's OG chicken joints. I made my way through a barnyard's worth of fried chicken platters, boxes, buffets, and fancy-pants entrees, looking for offerings that nailed the balance between crisp skin and juicy meat, not to mention real chicken flavor and that sweet fried taste. And in all cases, the thigh was king. Here are my favorites; as always, leave yours and your rage in the comments. 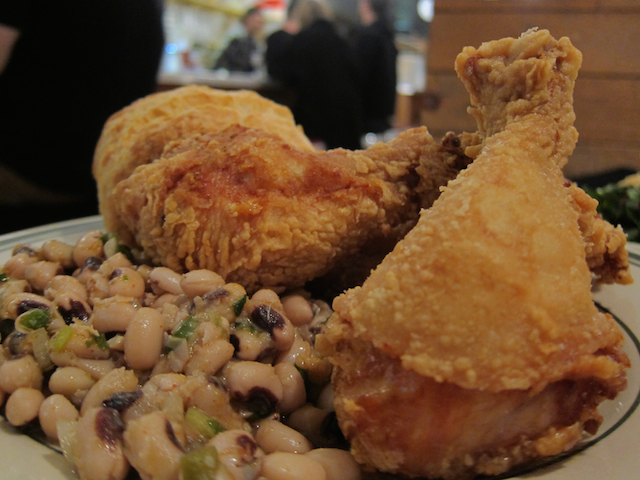 : The Williamsburg biker bar "pop-up" that pretty much started this whole new fried chicken era back in 2006 has gone through some incarnations: they've been shut down, they moved, they expanded, and just two months ago they opened a bright and friendly new outpost on the Lower East Side. Through it all, they've managed to put out the most consistently terrific fried chicken in town. I tend to alternate between the three-piece "box," ($14.50) which doesn't come in a box but does include a side (any of which are first-rate) and biscuit (upon which you should pour honey); and the fried cutlet biscuit sandwich ($7.50), which arrives drenched in vinegary hot sauce and melty honey butter. Plus, their pie selection is pretty rad.

Pies-n-Thighs is located at 166 South 4th Street between Bedford and Driggs Avenues in Williamsburg, Brooklyn (347-529-6090, piesnthighs.com), and at the LES outpost is on Canal between Ludlow and Orchard (212-431-PIES, piesnthighs.com). 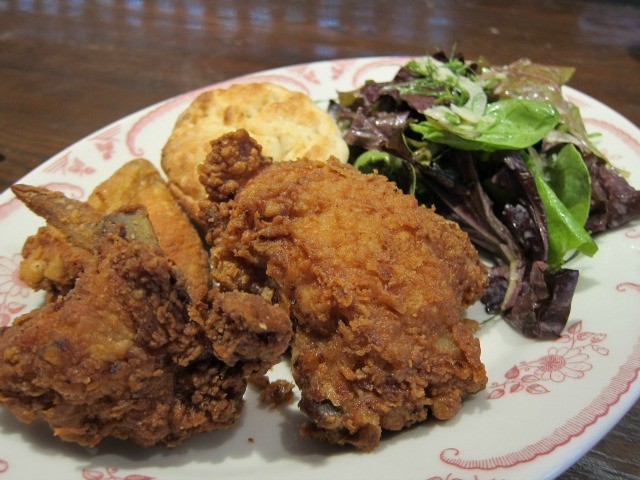 BOBWHITE LUNCH AND SUPPER COUNTER: Over on Avenue C, just far enough out of reach from the drunk hordes that roam the East Village, tiny three-year-old Bobwhite Counter serves a tea-brined bird that's simple, salty, and satisfying. And the full fried chicken supper, with salad and jumbo biscuit, is only $11.50, so you can afford to share a side or two and still get that overflowing bowl of pecan pie bread pudding with fresh whipped cream for dessert. Bonus: owner and chef Keedick Coulter, out of Roanoke, Virginia, is committed to using only humanely-raised animals (the pork sandwich is great here, too) and local, sustainable produce.

Bobwhite Counter is located on Avenue C between East 6th and 7th Streets in the East Village (212-228-2972, bobwhitecounter.com). 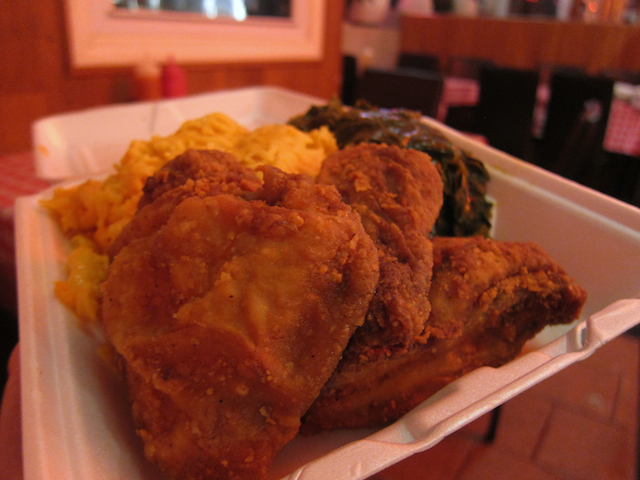 : Though his old-school Harlem joint has been around for "only" about 20 years, Charles Gabriel has been pan-frying birds for over six decades, getting his start as a kid in North Carolina and learning all the right secrets from his mother. The man knows what he's doing with the custom-made, four-burner-sized skillet he's got back in the eatery's kitchen. The atmosphere at Charles' is familiar to anyone who lived in pre-Bloomberg/pre-Giuliani NYC—red neon, heat lamps, a loud TV, bathroom through the kitchen, vinyl tablecloths... these sorts of places used to be everywhere. And the chicken is extraordinary: triple-seasoned (note: if you hate salt, don't eat here), juicy-not-greasy and intensely flavored through-and-through. Slap down $11 and you'll get a ton of food. If Charles' was on your block you'd eat here once a week and crave it the other six days. 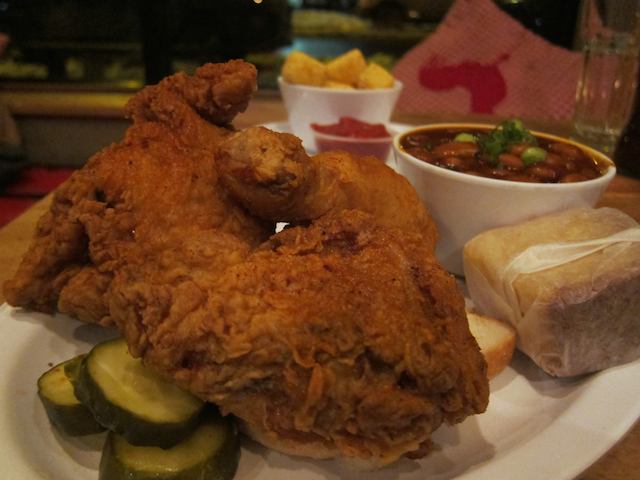 PEACHES HOTHOUSE: I have almost never been so instantly comfortable as when I first walked into Bed-Stuy's Peaches Hothouse. Though it's only about five years old—and part of Ben Grossman and Craig Samuel's Brooklyn empire of Southern-ish restaurants, which include Smoke Joint, Peaches proper and Marietta—it feels like a longtime, family-owned neighborhood spot, with diverse groups of people eschewing the private tables so they can sit at the bar, talking and laughing with each other and with the bartender while they eat. And the chicken here—specifically, the Nashville Style Hot Chicken—is spectacular, fiery and alive, whether ordered Hot or Extra Hot (you can opt for Regular too). Served on a slice of white, with dense cornbread, choice of can't-go-wrong sides, and heat-relieving pickles, this is a large, excellent meal for $13. 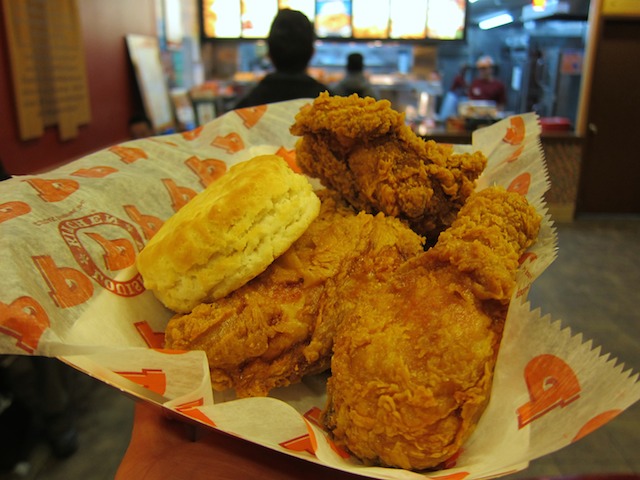 POPEYES: I have fond drunk-food memories of Popeyes from the early 1980s. I think back then, the only one in Manhattan was located in Times Square, but was somehow always worth the trip, even on those scary-looking trains of yore. But was it really any good, or was that the nostalgia (and the $3 pitchers) talking? To find out, I returned for the first time in literally decades to what is now called Popeyes Louisiana Kitchen...and it tasted EXACTLY the same! Even the beans-and-rice side I always used to get! I know that's the point of these fast-food restaurants, but still. A trio of spicy pieces (and you have to get them spicy) will set you back single digits, it's maybe the crunchiest bird on this list, and it's definitely the greasiest, but in a good way. Also really greasy: the Popeyes biscuit. A solid belly bomb, even if you've never rocked a Walkman Mega Bass.

Popeyes has multiple locations throughout the city. Visit their website for details. 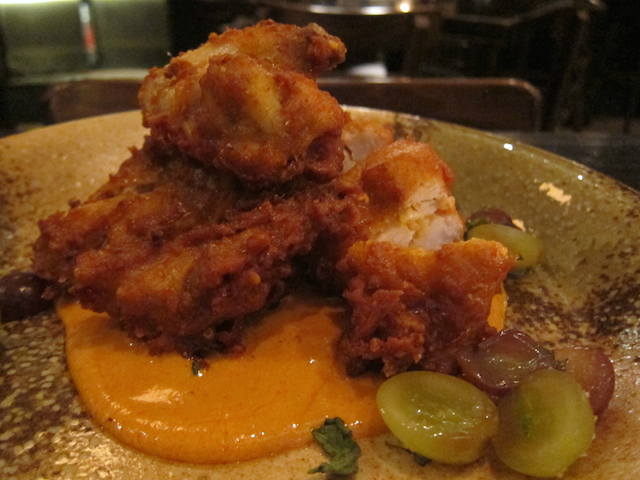 TALDE: Top Cheffer Dale Talde's namesake restaurant in Park Slope has been packed from the moment he first opened the doors in 2012. And for good reason since, for the most part, the food here is big-flavored and delicious. One of menu's highest points is Talde's Korean Fried Chicken, which is noteworthy for its combination of juicy meat and crisp, boldly-seasoned skin. The large breast arrives sliced up and sitting in a puddle of no-joke-spicy kimchi yogurt, with some pickled grapes and mint leaves strewn about—both of those should be incorporated into your bites. Yes, this dish costs $23 and doesn't come with a side (get the Kale Salad though, which is still the best of its kind in a city lousy with them), or even a biscuit, but if you're rolling through South Brooklyn with a fat wad, this is your fried chicken move. 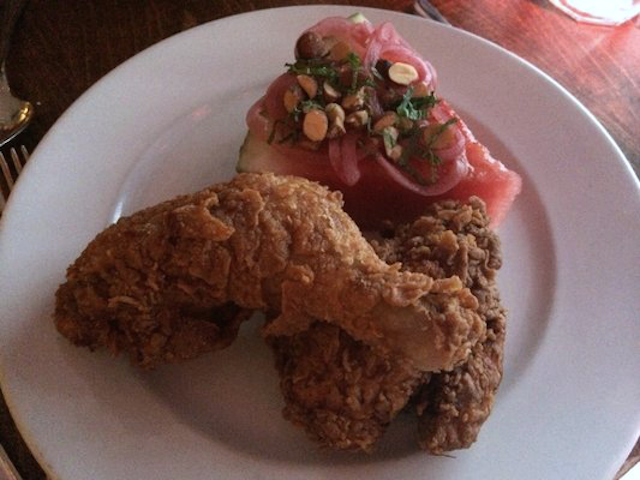 THE REDHEAD: I first became aware of Meg Grace Larcom's eponymous-ish East Village bar-cum-restaurant because of the Bacon Peanut Brittles, for obvious reasons. But in the ensuing six years or so, it's been the Redhead Buttermilk Fried Chicken keeping me coming back to Larcom's welcoming and winning spot. She switches up the sides depending on the season, but the bird itself is remarkably consistent. It's never greasy and never too dry—just a nearly perfect plate of fried chicken goodness for $20. And though the place can get raucous (it's a popular neighborhood bar, after all) you need never be concerned that a round of beer pong will break out. 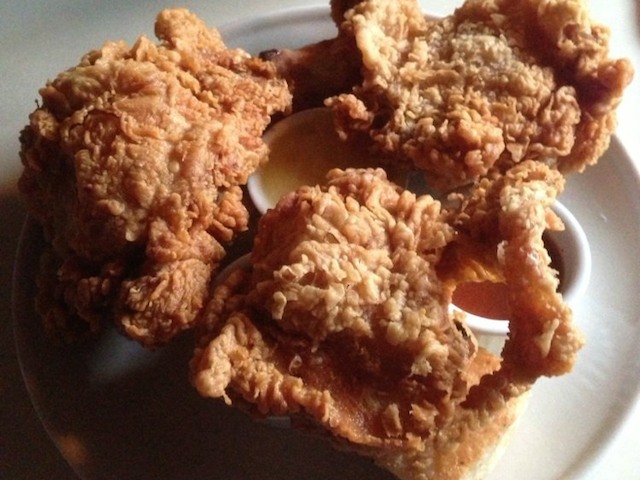 THE COMMODORE: Stephen Tanner helped found several Williamsburg comfort-food institutions—Diner, Egg and the aforementioned Pies 'N' Thighs—before opening The Commodore in 2010. Which, considering that's been around for about five years, has now reached "institution" status in this change-y nabe. The Commodore's entire menu is designed to go well with booze, but the indisputable thing to order is the Fried Chicken Plate, which consists of three fat thighs that stay juicy inside their slightly sweet batter; a couple of sauces (one ranch, the better one a vinegary hot sauce); and a handful of tiny, lardy biscuits. Get here before it becomes a Nordstrom's or whatever.

The Commodore is located at 366 Metropolitan Avenue at Havemeyer Street in Williamsburg, Brooklyn (718-218-7632).