Whether stuffed with imported French fromage or plastic-wrapped cheese product, we are true gluttons for grilled cheese. Luckily, we're not the only ones, as the city has seen a handful of grilled cheese joints open in the last year, offering decadent dairy fillings between two slices of buttery bread. And while we still cringe when forking over $13 for what we can make at home for under a buck, there's no denying that we have some exemplary options when it comes to cheesy carb cravings. Below, a few of our favorite places to get our grilled cheese on; as always, leave yours in the comments. 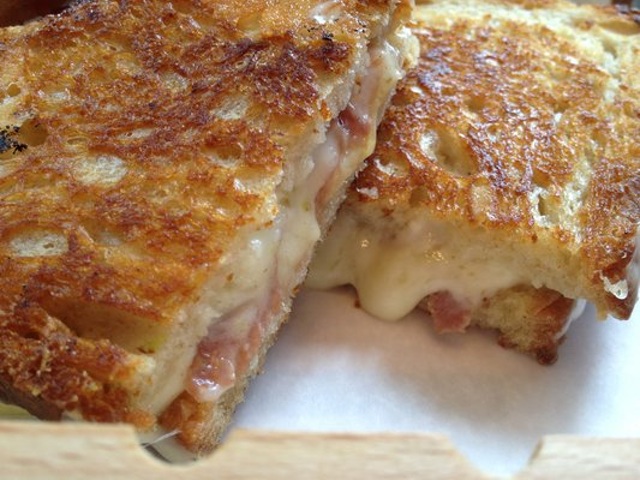 LITTLE MUENSTER: With a menu made up entirely of grilled cheese concoctions and the soups and sides that complement them, this Lower East Side eatery is a one-stop shopping for all your cheesy cravings. Proprietors and real-life couple Vanessa Palazio and Adam Schneider opened their Muenster mecca in 2011, followed shortly thereafter by a satellite shop in Dumbo, which serves a smaller selection of the original's signature sandwiches.

Right now both shops are offering the Autumn ($8.75) and the Veggie ($9), which we can attest are both out of this world. Butternut squash, sage brown butter, nutty asiago and muenster make up the seasonally-inspired sandwich; sharp white cheddar gets some added creaminess from ripe avocado, with lemon and herbs adding zest and zing to the latter. They're also doing a killer Pig Belly ($11) with gouda and caramelized onions and a Chicken Mole ($9) with longhorn cheddar, sour cream and cilantro if you're in the market for something more substantial. 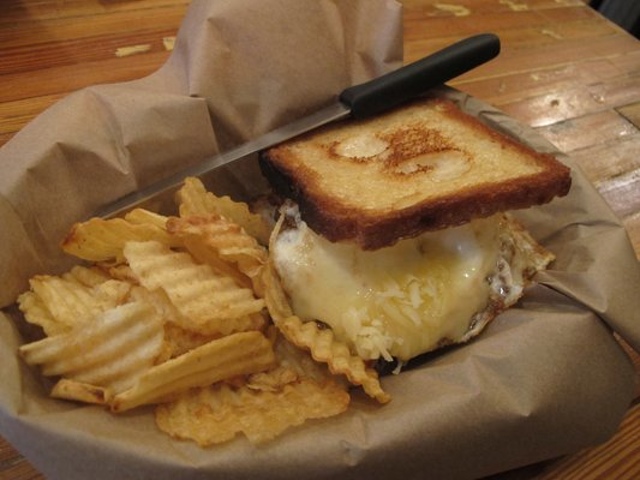 EARL'S BEER & CHEESE: We've already called out this tiny dairy-obsessed joint for their transcendent beer cheese but their killer grilled cheese sandwiches are also well deserving of praise. Come with a big appetite for their NY State Cheddar-based sammie ($8), which packs in pork belly, kimchi and a fried egg between two thick slices of sourdough bread. As soon as you bite in, the runny egg oozes into the rest of the sandwich, coating everything in luscious yellow goodness that, while delicious, requires extensive napkin use, so be forewarned. They're also griddling up a Double-Cream Brie on brioche ($6) with sweet-and-spicy blackberry mostarda and a Calabro Mozzarella ($6) with miso mayo, potato chips and dill pickles on an English Muffin. Order up a bowl of the Spicy Tomato Soup ($7), as tradition dictates, and prepare for the cheese coma. 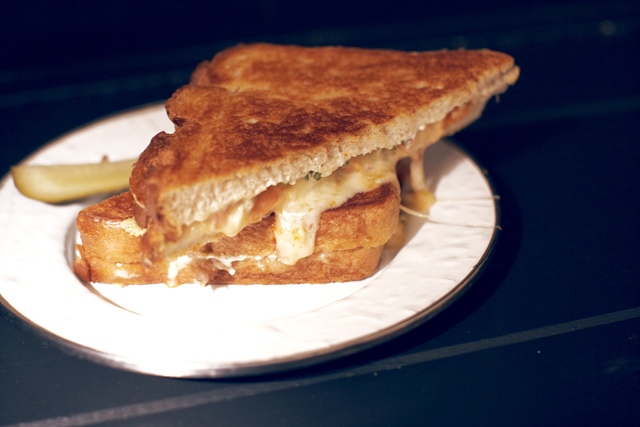 NOORMAN'S KIL: Whiskey and grilled cheese, ain't nothin' wrong with that. This Williamsburg whiskey haven rocks a killer 400 whiskies from all over the world and they also happen to whip up some truly decadent and delicious grilled cheese sandwiches to boot. You can keep it simple with the Jane ($5)—NY Sharp Cheddar and My Friend's Mustard on sourdough—grab a little sweet-and-savory action with the Betsy ($6)—Vermont Chevre, apricot jam, honey and thyme on ciabatta—or truly indulge with the decadent Karen ($7), which packs in Fromage Blanc, Gruyere, NY Sharp Cheddar and Havarti between two slices of sourdough.

For our money, we dig on the Maefred ($6): Double Creme Brie, local mushrooms, diced onions and rosemarry on crusty ciabatta. The brie melts into all the nooks and crannies of the bread, binding together the tender mushrooms and sweet onions, while the rosemary adds a lovely woodsy balance to the rich sandwich. Order up a glass of Redemption Rye and you have yourself a perfect meal on a chilly evening.

Noorman's Kil is located at 609 Grand Street between Lorimer and Leonard Streets in Williamsburg, (347) 384-2526; noormanskil.com 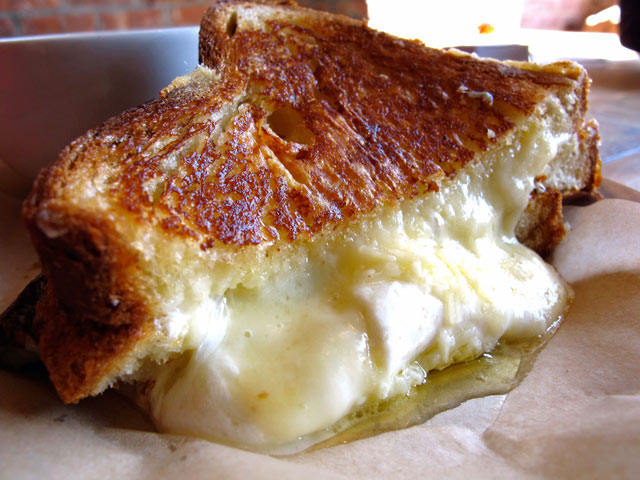 THE QUEENS KICKSHAW: If the above photo doesn't make you want to drop everything and hop the train to Astoria then you're a stronger person than we are, because holy wow, look at that thing of beauty. This Queens joint likes to have fun with its food, pairing delicious dairy with interesting and unexpected flavor combinations. Their Manchego & Ricotta ($9) creation includes minted eggplant and capers while the Gouda ($10) is accompanied by black bean hummus, guava jam and pickled jalapenos.

With the exception of their classic Cheddar & Mozzarella, which comes with the traditional cup of tomato soup, all of their sandwiches are accompanied by a special green salad; we hear cheese calories don't count when accompanied by vegetables. They offer a limited menu of their grilled cheeses at dinnertime, so swing by for a weekend lunch to get the full experience.

MELT SHOP: Decked out with an assembly line of panini presses, this grilled cheese emporium cranks out hardcore sandwiches to the masses in Midtown and Flatiron. Their bold, overstuffed sammies pack a serious bang for your buck, with no sandwich costing more than $9 and each of them fully loaded for maximum craving crushing. We're suckers for The Dirty ($7.25), which packs in pepper jack and muenster cheeses with sweet caramelized onions, pickled jalapenos, tomatoes and a handful of crunchy potato chips. For serious cheese heads, try the Three Cheese Melt ($7.85) with Gruyere, Havarti and crumbled goat cheese with oven-roasted tomatoes or keep it classic with the Aged Cheddar ($7.25) with Widmer's cheddar and Vermont maple glazed bacon.

CLEMENTINE BAKERY: Looking for a grilled cheese sandwich sans "real" cheese? Clementine Bakery, a vegan oasis in Clinton Hill makes a mean grilled faux-cheese sandwich using Daiya cheddar and mozzarella, a great non-dairy cheese substitute that melts just like the real thing. Even better, they're serving up the cruelty-free sandwich on Clementine's fresh-baked bread, with tomato slices and fake bacon available upon request. Pair it off with one of Clementine's vegan soups and the best vegan brownie you'll have all week. (Kelly Weill)

Clementine Bakery is located at 299 Greene Avenue between Classon and Franklin Avenues in Clinton Hill, (718) 483-8788; clementinebakery.com 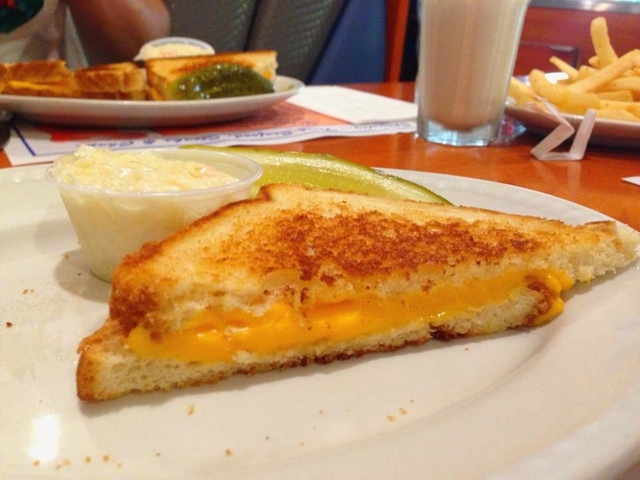 A thing of beauty is a joy forever (Neptune Diner via Angie V./Foursquare)

YOUR LOCAL DINER: Look, we're not going to say that there's something wrong with highfalutin grilled cheese—you're reading this piece, after all. But sometimes the simplest things in life are the best, which is why the classic diner grilled cheese will always be one of the great anytime comfort meals. Two slices of white bread, two slices of American cheese and plenty of butter. It doesn't get much better than that.