The 7 Best NYC Restaurants To Blow Your Paycheck On

We might brag about the never-ending supply of cheap eats and food truck lunches that flood our culinary scene, but it goes without saying there are many posh, pricy restaurants in town that sauté their baby birds in truffle oil, dress 'em up and stick a $$$$$ price tag on them. Some of these spots are obviously overhyped and unworthy of half a month's paycheck, but there are some gastronomic gems here that should still be experienced, even if it's a once-in-a-lifetime, sell-a-vital-organ event. Here are our favorites; as always, leave yours in the comments. 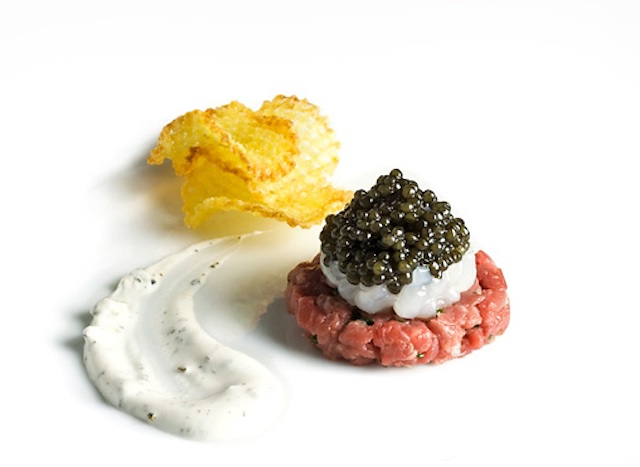 LE BERNARDIN: There's a reason Eric Ripert's famed Midtown seafood spot gets so much good press, earning three Michelin stars and high accolades from the likes of NY Mag, Zagat and the Times (four stars!), to name a few. A night here will cost a pretty penny, with a meal for two generally hovering above $300 or so, but the dishes come so delicately and exquisitely prepared they're well worth the splurge.

If you're new to the Le Bernardin experience, your best bet is to spring for one of the tablewide tasting menus. The Chef's tasting menu ($195 per person, $333 with a wine pairing) features eight of samplings of upscale fish dishes, like sautéed langoustine with truffles and chanterelles, rare smoked wild salmon and sautéed dover sole. The Le Bernardin tasting menu ($150 per person, $241 with wine pairing) is ever so slightly scaled down, with seven dishes including yellowfin tuna with foie gras, wild striped bass and rare scallops. 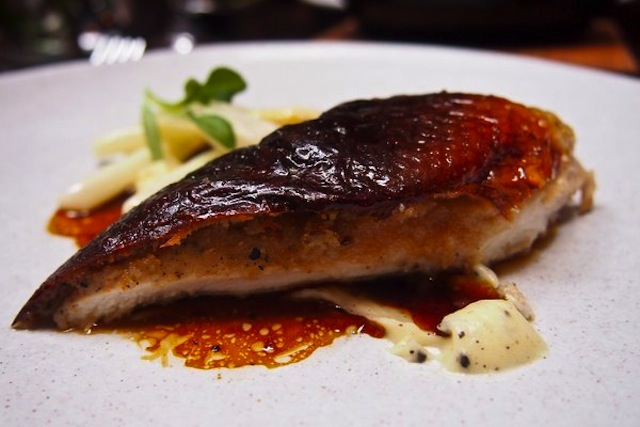 THE NOMAD RESTAURANT: We're already big fans of the NoMad Hotel's scholastic Library Bar, but the upscale restaurant out front is just as worthy of a bank account overdraw. The kitchen is helmed by Eleven Madison Park's Will Guidara and Daniel Humm, and the rich dishes are finely curated and executed with culinary aplomb. Though food snobs might scoff at ordering chicken at a fancy restaurant, NoMad's finest, most decadent entree is its whole-roasted chicken for two ($79). The white meat comes delicately laced with foie gras, black truffle and brioche; the dark meat is fricasseed with butter, sautéed shallots and morel mushrooms, served as a side dish to the carefully split chicken breast centerpiece. If that unwitting masterpiece isn't enough for you, the flavorful roasted duck, uniquely paired with fig, fennel and orange-tarragon yogurt, is a fine addition for $34; noteworthy small plates include the King Crab-doused tagliatelle appetizer ($19) and the sweetbreads "snack" ($9). 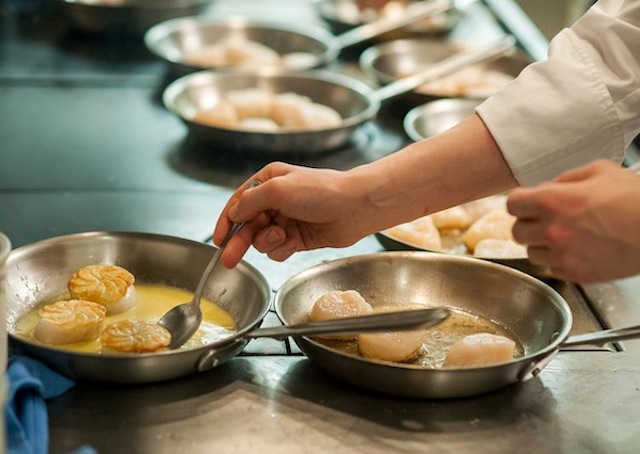 PER SE: Per Se's multi-course menu has been widely heralded, but it's also notoriously pricey, with each of Thomas Keller's daily tasting menus—one a tasting of vegetables, one a chef's menu—running a cool $295 each. But each of the nine ever-changing courses is a gastronomical feat, meriting the three Michelin stars the restaurant has been awarded.

Meat dishes, oysters, finely curated greens, lobsters, cod and myriad other exquisite small plates accomplish the restaurant's desire to offer it diners one enticing taste of everything (though, occasionally, even a small taste is too much for some). Patrons are feted with fresh breads and spreads between courses, and rich desserts are rolled out at the end, leaving everyone stuffed to the brim by the meal's completion. The menus are unique daily, so if you're fortunate enough to experience Per Se on multiple occasions, you'll never have quite the same meal twice; there's also an a la carte salon menu if you aren't ready for the whole prix-fixe shebang. Oh, and that spectacular view of Central Park doesn't hurt, either.

Per Se is located at 10 Columbus Circle between Central Park South and Broadway in Midtown West (212-823-9335, perseny.com) 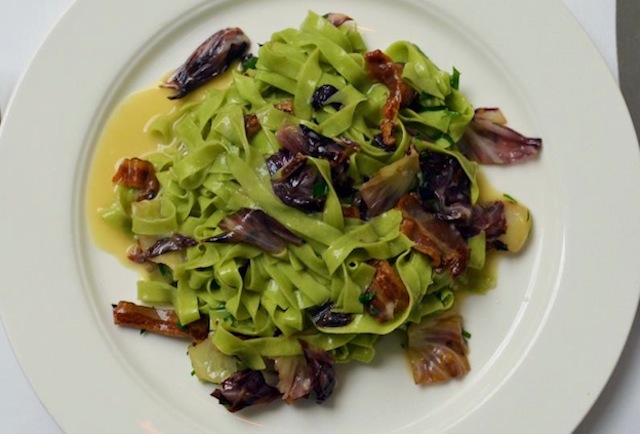 BABBO RISTORANTE AND ENOTECA: Mario Batali's beginning to feel like too much of a celeb-chef these days, but there's no question that his West Village hotspot is popular for a reason. Babbo thrives on al dente pasta, flavorful sauces and meats, serving up lovingly crafted dishes that are well worth the fight for a reservation. Babbo's prices aren't quite as high as some of its counterparts on this list—a pasta testing menu runs $80 per person and the traditional tasting menu runs $90, each with an added $60 wine pairing option.

Standout dishes like black tagliatelle with parsnips and pancetta and pappardelle bolognese crown the pasta menu, while grilled guinea hen and duck tortelli hold their own on the meaty traditional one. If you choose to dine a la carte, try the spaghettini served with a one pound lobster ($28) or spring for the massive bowl of deconstructed osso bucco for two ($75); it's not quite like a dinner at an osteria in Bologna, but it works its magic anyway. 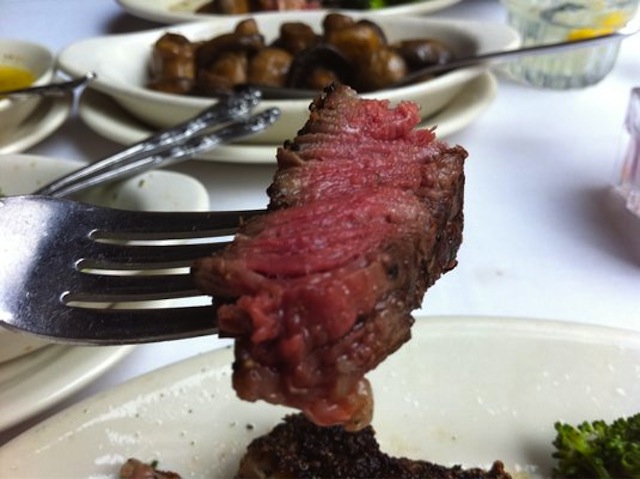 DEL FRISCO'S DOUBLE EAGLE STEAK HOUSE: Few meals are more satisfying than a good steak, and this famed Rockefeller Center steakhouse delivers, for a price. Even Jeremy Lin likes it! Steaks range from a $44 eight-ounce filet mignon to a 32-ounce, $95 hunk of prime Wagyu longbone, with everything from prime rib-eye to veal tomahawk chop in between. They've also got a few seafood offerings, but, hey, you're in a steakhouse, eat a damn steak. Though don't skip out on dessert, because their lemon cake is legendary. 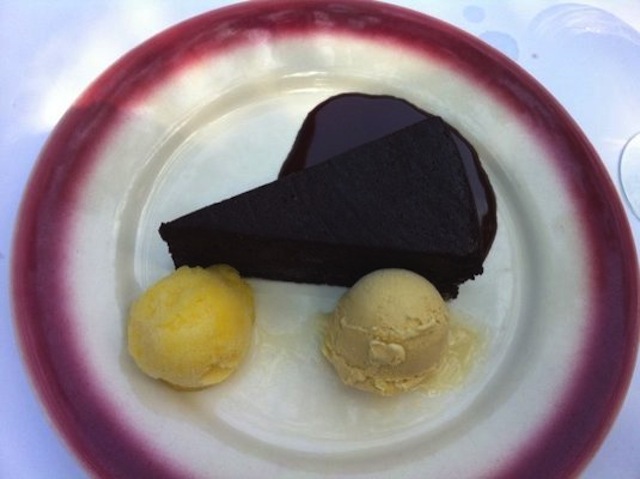 THE GROCERY The Grocery in Carroll Gardens is definitely a once-a-year Special Night Place—this is where you celebrate, splurge, and treat yourself to something that you can't get on Seamless. While the menu may look like it contains some pretty standard New York City restaurant pricing... the dishes are small, somewhere between Tasting and Tapas. For dinner for two, you're going to have to order at least 6 dishes... but they're all creatively wonderful. (Note: there are entrees, but they are also small.) Where the no frills space is lacking in... frills, their food is not. From the complimentary amuse-bouche to the gingerbread steamed pudding, this place is worth the splurge. And when weather allows, try to get a seat in their garden. Jen Carlson

The Grocery is located at 288 Smith Street between Sackett and Union Streets in Carroll Gardens (718) 596-3335, thegroceryrestaurant.com). 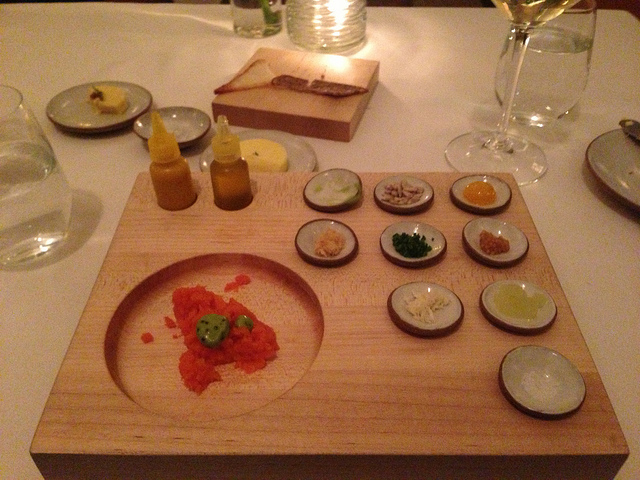 ELEVEN MADISON PARK Chef Daniel Humm and Will Guidara are currently dazzling diners at The Nomad, but they honed their skills on the outstanding Eleven Madison Park. The restaurant continues to raise the bar: Two years after Danny Meyer sold the restaurant to them, they have transformed the restaurant into a $225 tasting menu-only temple of culinary wonder and magic tricks.

During a special (anniversary) visit there earlier this year, there were 16 items on the menu, such as "Surf Clam with Morcilla Sausage and Celery Root / Clambake with Whelk, Parker House Roll, and Chowder" and "Beef, Grilled with Mushrooms, Amaranath, and Bone Marrow / Braised Oxtail with Foie Gras and Potato." A "Pretzel, Mustard, and Grapes" course came in a picnic basket with specially brewed beer. And the Carrot course is presented as a tartare, which is ground at the table for you—and then you get to add various spices, oils and herbs to it. It's next level root vegetable presentation!

The service is impeccable, the atmosphere (it's in a landmark Art Deco building) is refined, and the wine list is incredible. But be prepared to spend (or expense?) a small fortune. As Bloomberg News food critic Ryan Sutton calculated, "Dinner for two, after wine pairings, tax and tip, will cost $954." Jen Chung

#Babbo
#best of gothamist
#del frisco's double eagle steakhouse
#eleven madison park
#le bernardin
#nomad
#per se
#the grocery
#original
Do you know the scoop? Comment below or Send us a Tip