The 7 Best Milkshakes In NYC

National Ice Cream Day may have been yesterday, but we're firm believers that you can celebrate delicious frozen ice milk whenever you damn well please. With more humid, sticky weather headed our way, indulging in a sweet, frothy milkshake is just what the meteorologist ordered. Every burger joint and diner offers a version of this classic hot-weather drink, but there are a few spots we think whip it real good. As always, leave your suggestions in the comments. 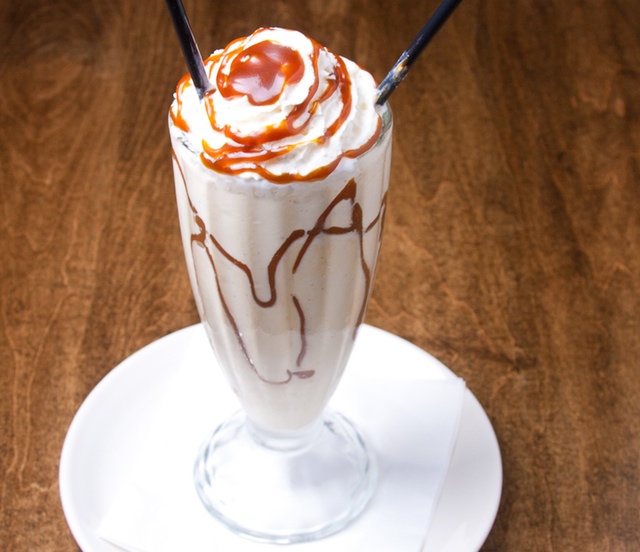 THE SPIKED SHAKE FROM BURGER AND BARREL: If there's one thing better than a frothy, decadent shake, it's a frothy, decadent shake with booze in it. This upscale SoHo burger joint offers The Spiked Shake ($13), a vanilla ice cream shake whipped with Buffalo Trace bourbon and drizzled with a sweet and salty caramel sauce. The smoke and sting of the bourbon cuts through the sweetness of the drink, making for a shake worthy of an adult palate.

Burger & Barrel is located at 25 West Houston between Greene and Mercer Street (212) 334-7320, burgerandbarrel.com 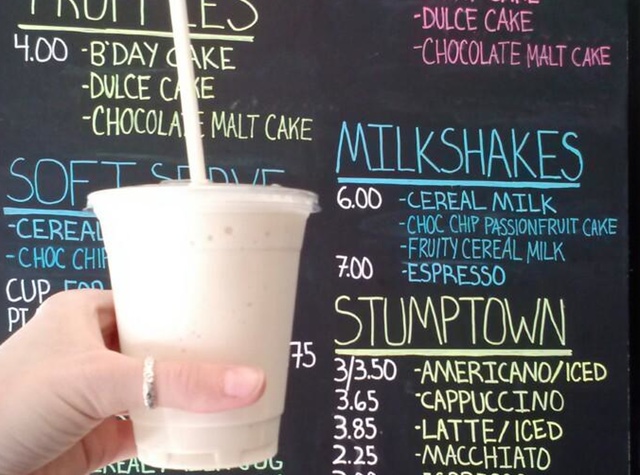 FANCY SHAKES FROM MOMOFUKU MILK BAR: Christina Tosi's dessert fame spreads way beyond her addictive Crack Pie with the "Fancy Shakes" at their Williamsburg outpost. Melty soft serve ice creams are blended up with a variety of mix-ins, like corn powder, vodka and Kahlua for the Cereal Milk White Russian and espresso and Frangelico for the Fancy Espresso Shake. Until August 1st, two special shakes are on offer: The Fruity Cereal Milk Shake made with fruity cereal milk and white rum and the Yuzu Cherryrita with soft serve, tequila and lemon honey syrup. Depending on the flavor, the boozy-frosty delights set you back between $6 and $9.

If you're not down with the hooch, other Momofuku locations can blend you up a more traditional shake made with soft serve and organic whole milk. 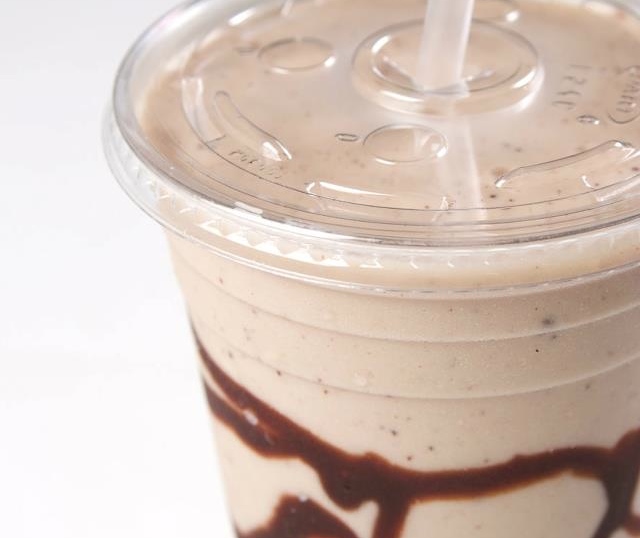 BUTTERFINGER SHAKE FROM TERRI: Vegans and lacto-phobes take heart! This cruelty-free lunch spot has you covered with a selection of non-dairy shakes for when you're feeling indulgent. The cafe use Temptation soy ice cream as a base, mixing it up with soy milk and other vegan mix-ins. Their popular Butterfinger shake ($6.20) uses cookie dough soy ice cream, vegan chocolate syrup and your choice of milks—soy, almond or rice—to create a damn good impersonation of the real thing. For traditionalists, strawberry, chocolate and vanilla option are also available. 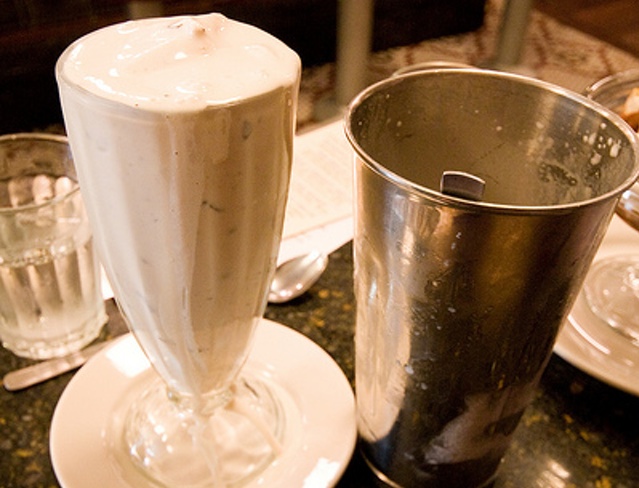 BROOKLYN FARMACY & SODA FOUNTAIN: The egg creams! The 50s swing music! The shelves of vintage chocolate treats! Nothing beats the nostalgic atmosphere of Brooklyn Farm, Carroll Garden's flagship ice cream shoppe. Most of their flavored syrups are homemade in a nearby kitchen, and they oh-so proudly serve Adirondack Creamery Ice Cream, one of the freshest ice cream creators in New York state. Order one of their fancy sundaes in milkshake form, like the Mr. Potatohead ($9.50) loaded with peanut butter, caramel, and potato chips, and watch as suspender-clad staff whip it up behind the old-timey bar, still intact from its previous use as a real 1920s pharmacy. You can also request most any sort of shake you can imagine, as owner/head soda jerk Pete Freeman has been known to walk around the corner to a nearby market to find whatever ingredient your belly desires. Alexander Seedman 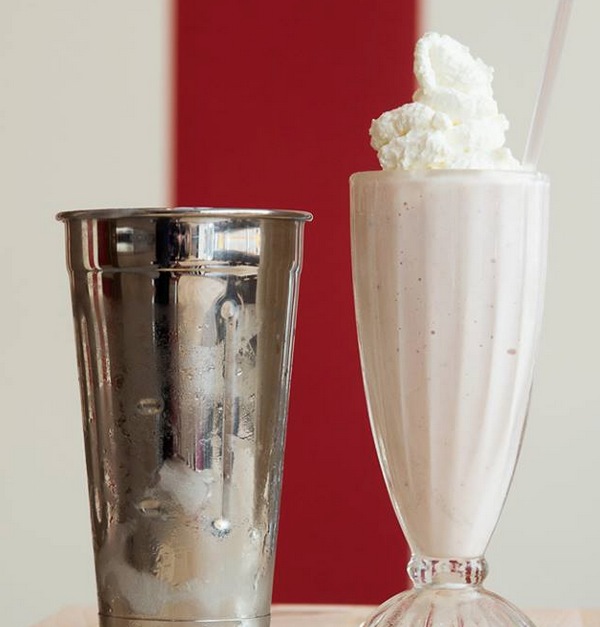 ODDFELLOWS ICE CREAM CO.: WD~50 alum Sam mason opened this off-beat ice cream parlor earlier this spring, with flavors like pretzel, toast and chorizo caramel swirl in constant rotation. The shop began whipping up milkshakes soon after opening, and promise to turn any of their rotating flavors into a milkshake so long as your selection doesn't contain huge chunks (sorry bacon lovers). Most recently, the shop turned out an excellent Burnt Marshmallow offering, with lots of char and smoke flavors for a not-too-sweet drink. They tell us to look out for a Root Beer flavor next, with plans to roll out the new concoction either later this week or early next week. Regardless of flavor, indulge in a 16-ounce shake of your choice for $7.50. 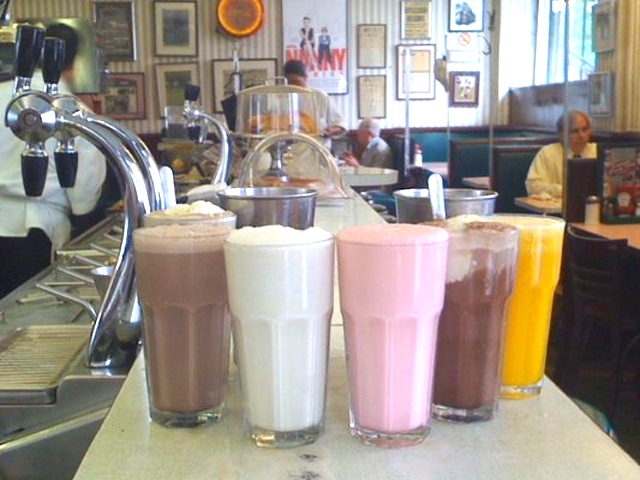 MALTED SHAKES FROM LEXINGTON CANDY SHOP: Debates rage about whether malted shakes "count" as true milkshakes, but for the sake of argument, you can't get much better than the malted shakes from this UES institution. Since 1925, the LCS has lovingly mixed up their shakes using Bassets Ice Cream, a Philadelphia creamery founded in 1861. From there, soda jerks add in malted milk for that special flavor and texture. Being purists, we opt for a classic vanilla, but the shop offers Butterscotch, Raspberry and even Coca-Cola flavors as well. 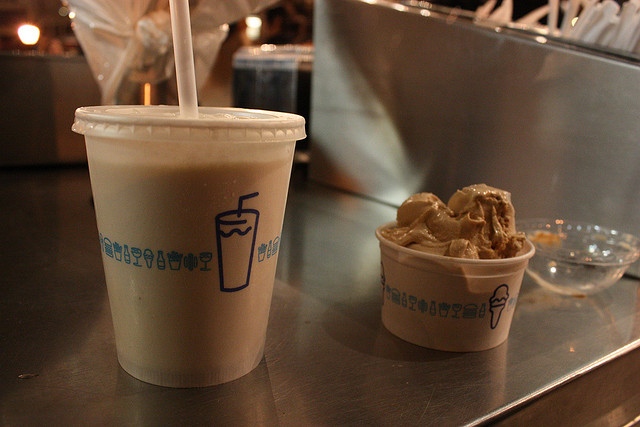 BLACK & WHITE SHAKE FROM SHAKE SHACK: We weren't originally going to include Danny Meyer's burger empire on our list—after all, doesn't it almost go without saying that the food is delicious? But we couldn't ignore the call of the Shack, especially when it comes to their Black & White ($5), a hand-spun shake that mixes vanilla and chocolate ice cream. Sometimes you'll get a little sip of vanilla, then a hint of chocolate, and then a great mix of the two, which mellows out each flavor into a pleasingly sweet new experience. What takes this drink to the next level is the corn syrup and growth hormone-free product they use—yes, you can taste the difference.

Shake Shack has multiple locations throughout the city and don't pretend you don't know which one is closest to you. shackshack.com

#best of gothamist
#brooklyn farmacy
#burger & barrel
#lexington candy shop
#milkshakes
#momofuku milk bar
#oddfellows
#terri
#original
Do you know the scoop? Comment below or Send us a Tip
A new Gothamist is coming! We’ve moved comments over to our beta site. Click here to join the conversation and get a preview of our new website.