Are you ready to make some really bad decisions in regards to your body and what you put on and in it? Sure you are, which is why our inboxes are inundated with bizarre holiday-themed pitches from restaurants hoping you'll want to eat/drink the 2,500 calorie bombs they're shouting about all over their social media channels. Below, the five most outrageous Halloween foods Big Restaurant PR is pushing this season. 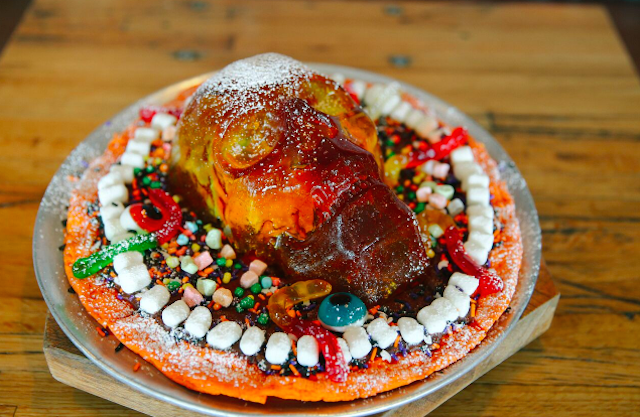 "The Skull" (courtesy of Industry Kitchen)

From the Financial District restaurant behind the $2,000 pizza comes "The Skull," a candy pizza that involves not only obscene amounts of sugar, but also promises pyrotechnics. This pizza has everything: Nutella sauce, gummy worms, a gelatinous skull that explodes with creamy white brains. Wait, what? "Industry Kitchen will light the skull on fire and its marshmallow brain will explode out of it!" says the excited press release for this "pizza." At least there's no pineapple on it. 70 South Street, (212) 487-9600; industry-kitchen.comUpdate A rep for the restaurant says the flaming skull has been downgraded from its previously fiery state and is now "doused with hot 'red chocolate' and its cotton candy brain oozes out." 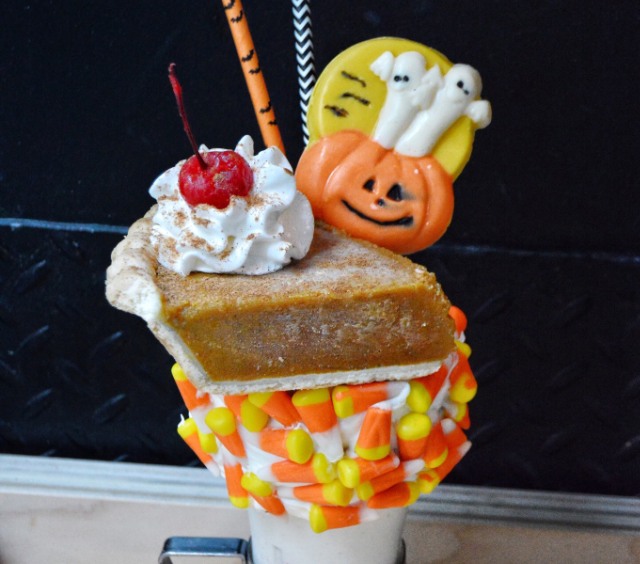 The burger shop that almost killed our intern can't stop, won't stop, creating "milkshakes" that defy the laws of both gravity and good sense. Their latest: the "Halloween Crazy Shake" ($15), which, to be fair, could be the name of any one of their cookie-and-candy creations minus the holiday designation. Available at any NYC location, the HCS tops a pumpkin shake with (deep breath) vanilla frosting, candy corn, a slice of pumpkin pie, whipped cream, a chocolate lollipop in the shake of a pumpkin, and...a cherry. It's only available Halloween day, so plan your calorie tracking appropriately. Multiple Locations; blacktapnyc.com

The brick and mortar "Barlour" of boozy ice cream brand Tipsy Scoop created the sugary heart attack pictured above. It's the Spiked Pumpkin Spice Latte ice cream sundae ($10), which is better than a regular sundae or PSL because it comes infused with booze. The ice cream maker's Pumpkin Pie ice cream is infused with spiced rum and it tops a Café Latte Donut from Dough Doughnuts. Toppers of whipped cream and cinnamon are added, and pumpkin candy corn and a cherry are added as a garnish. It's available now through Black Friday. 217 East 26th Street, (917) 388-2862; tipsyscoop.com 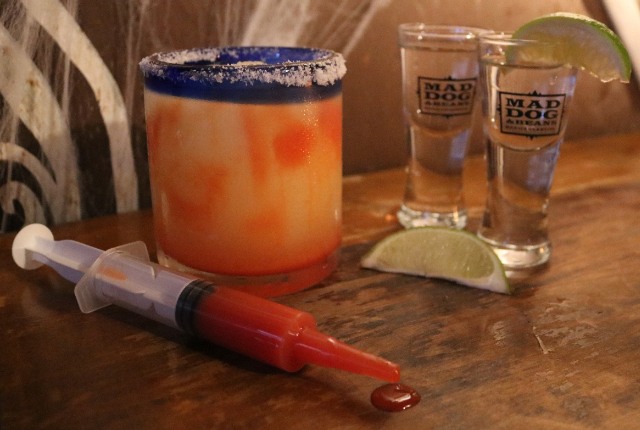 Blood-filled syringes: can they be any more appetizing? Sure, when you're injecting them into a frozen margarita, which is what Mad Dog & Beans Mexican Cantina invites you to do so on Halloween "weekend" (October 27th - 31st). Their Bloody Orange Margaritas ($13) are an original or frozen Mad Dog Margarita that come with a plastic syringe filled with blood orange puree that you "shoot" (their words) into the margarita. Once you've bloodied your drink, take a moment to reflect on the life's choices that brought you to this moment. 83 Pearl Street, (212) 269-1177 and 5 East 38th Street, (646) 998-5722; maddogandbeans.com 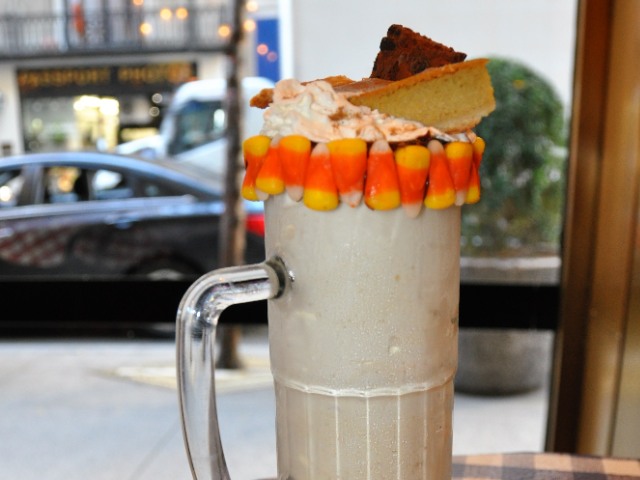 Back at it again with the milkshake game, this time at Bill's Bar & Burger, where all three locations are selling a Pumpkin Vanilla Shake ($6.95) beginning next week. The shake component is pretty basic, but the toppings are...not, really. Like the version described above, the shake let's a slice of pumpkin pie do the heavy lifting garnish-wise, with some salted caramel sauce and whipped cream as supporting players. Chocolate frosting acts as glue for a very orderly row of candy corn pieces, which rim the glass like a little orange fence. The shake is on the menu through November. 16 West 51st Street, (212) 705-8510, 22 Ninth Avenue, (212) 414-3003, and 85 West Street, (212) 894-3800; billsbarandburger.com

#food gimmicks
#gimmicks
#hallowen
#original
Do you know the scoop? Comment below or Send us a Tip
A new Gothamist is coming! We’ve moved comments over to our beta site. Click here to join the conversation and get a preview of our new website.