The 5 Best Things About The Brooklyn Pour Beer Extravaganza 2012

On Saturday, brew hounds from across the boroughs flocked to Skylight One Hanson in the former Williamsburgh Savings Bank Clocktower to down as much beer as possible at the Village Voice's second annual Brookyln Pour. As devoted beer lovers ourselves, we made the pilgrimage to sample as many of the 100-plus brews as we could in our three hour time slot. Here's our dispatch from the event and the things we enjoyed most: 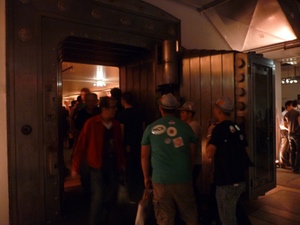 Organizers took to heart complaints of overcrowding from last year's event and split the event into two sessions. We barely had to wait to score our next sample, meaning more time spent drinking and less elbowing to access the next vendor. The lovely former bank space also lent itself well to the event, with plenty of horizontal space to stash our glass for a breather and a few different rooms to spread out the crowd. Our one complaint lay with the downstairs vault space: low-ceilings, loud music and too many people gave way to feelings of claustrophobia and we quickly made our exit to the more open space upstairs.

Game Changer: IPAs are not this author's favorite brew, strange as that may be, so we approached Fire Island Beer Company's Red Wagon IPA with caution. We now wholeheartedly admit that we were oh so wrong about our judgements: this beer kicks ass. The second offering from the tiny Ocean Beach brewery, the Red Wagon IPA bucks what we thought we know about American IPAs, combining a deliciously smooth, fruity flavor with just enough hoppy bite to remind you of what you're drinking. We could easily put back five or six of these in one sitting. Find it on tap at Blind Pig, Wildwood BBQ, and others.

Most Bonkers Flavor: By now you know of our suspicions about gimmicky, seasonal food stuffs so we were initially dubious to try the Chelsea Pumpkin Pie from the Chelsea Brewing Company. The scent of this brew is uncannily similar to fresh pumpkin pie on Thanksgiving morning. You can smell cinnamon, nutmeg, pumpkin puree, which is both comforting and off-putting at the same time. The pale yellow, slightly-cloudy brew doesn't have the sickly-sweet flavor you might anticipate, rather it has a slightly spicy quality with a smooth finish. We probably wouldn't have more than one but would certainly imbibe a glass while waiting on the big holiday meal. Sample the brew in house at the Chelsea Brewing Company restaurant or fill up a growler to enjoy it at home. 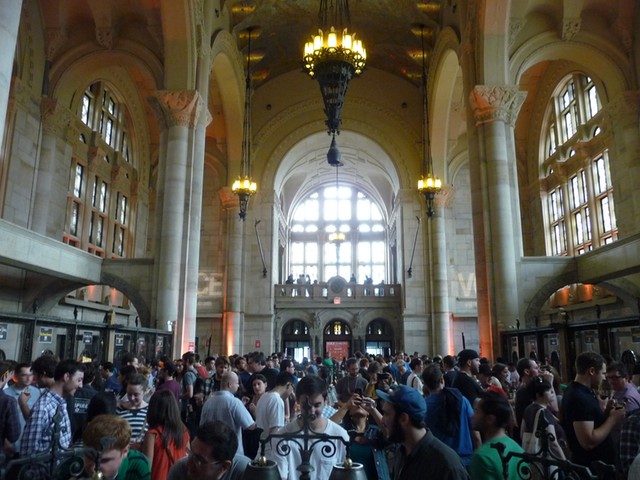 The scene in the main room (Nell Casey/Gothamist)

Tasty Beer, Silly Name: Ports and ambers were a dime a dozen at the fest, but a little brew from Bar Harbor, Maine stood out not only for its lovely, smokey notes but also for its eye roll-inducing name: Coal Porter. The rep for Atlantic Brewing Company called it a "good beer with a bad pun," and she definitely hit the nail on the head. Five different types of malts give the beer a rich, bold flavor with notes of ash and a nice zing of hops to balance everything out. The name may be lame but the brew is most decidedly not. Taste it for yourself at the Upper West Side's Broadway Dive Bar. 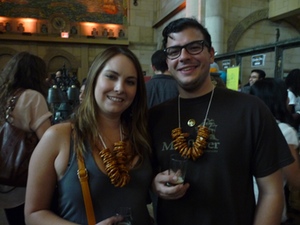 While tasty food options were available in the courtyard, some guests took it upon themselves to BYO snacks in the form of "pretzel necklaces." Strings of pretzels dangled from drinker's necks, acting as part palate cleanser and part buzz maintainer. "It's a beer fest veteran move," explained attendees Jenni Schalk and Mike Viola. "You don't want to get blacked out!" The two were sporting Duane Reade-brand snacks that they deemed "stale," while others did a pretzel and Funyuns combo for maximum snacking potential. As the hours wore on we wished we'd thought similarly—something to remember for next year's Pour.