The 15 Best Bars With Backyards In NYC

With the weather hitting springtime temps AT LONG LAST, we're ready to fully indulge in New York's longstanding tradition of drinking outdoors. Rooftops are, of course, solid options for this type of activity, whether they belong to your apartment building or to a fancy overpriced bar. There's stoop drinking, which is STILL illegal, thanks de Blasio.

Then, there's backyard and patio boozing, where people can imbibe while surrounded by "nature," like store-bought plants and Christmas lights. Here are our favorite backyard/patio-boasting bars in the city; tell us which ones we've forgotten to ruin for you in the comments. 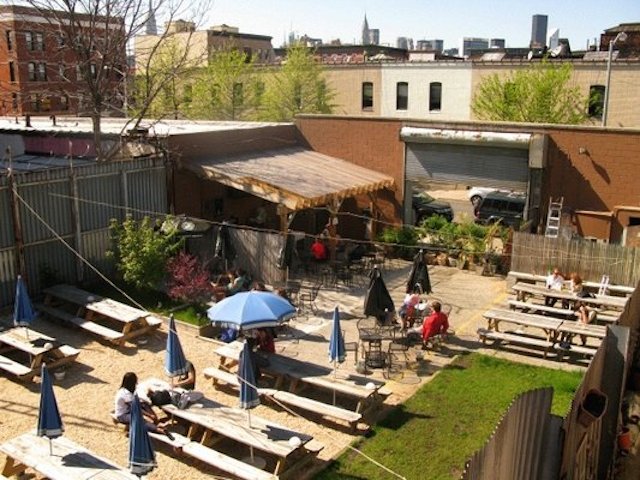 T.B.D.: Greenpoint's got more than a few solid backyard bars, with Diamond Bar and Beloved, to name a few. But beer bar t.b.d. is our favorite place to hang outdoors with a cold brew or two, considering their backyard is massive and boasts a hot dog-making grill that's clutch in the summer. Umbrella-covered picnic tables and a few scattered tables provide plenty of seating, happy hour beers run $4 (from 4 p.m. to 7 p.m. on weekdays) and there's a ping pong table inside if you're looking to pair your drinking with an athletic activity.

Best of all, according to Yelp, t.b.d. is a No Loud Baby zone, so you can day drink without having an infant scream in your ear. 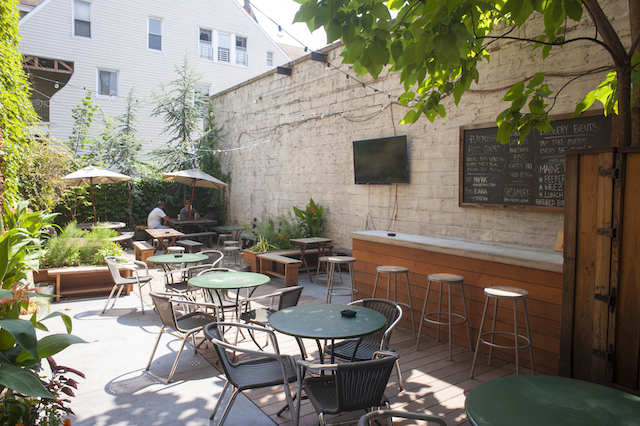 SYCAMORE: This Flatbush bar's got a solid backyard space no matter the season, with a tent full of heaters, hunting trophies, and board games set up to placate imbibers unwilling to give up the outdoors in winter. Once the weather's warm, Sycamore's wooden bench-filled backyard is open and spacious, complete with a rotating keg and little gas torches to keep the mood lighting going.

The bar serves up a stellar selection of whiskey, beer and wine, along with bar food and small bites from rotating local food vendors. Bonus points: Sycamore's a flower shop during the day, so you can score a pre-boozing bouquet if you show up early enough.

Sycamore is located at 1118 Cortelyou Road between Stratford and Westminster Roads in Flatbush, Brooklyn (347-240-5850, sycamorebrooklyn.com). 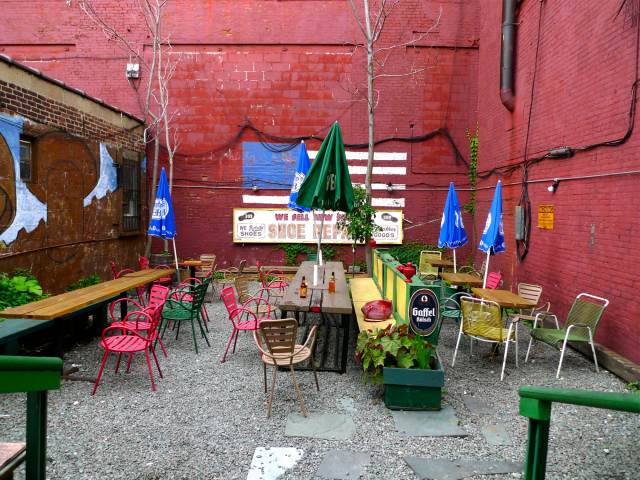 BROOKLYN ICE HOUSE: The backyard at Brooklyn Ice House is not dramatically different than many other Brooklyn backyards: Long benches, high walls, a couple umbrellas for "ambiance." What does this place have that others don't? For starters, it opens at noon seven days a week, as IT SHOULD. Having a backyard that's inoperable until 6 p.m. is like having a convertible that only runs when it's snowing or a parrot that can recite all of T.S. Elliot's collected works—unless you're home.

Also, Ice House serves food. The number one cause of under-drinking is hunger, but here, you'll never have to turn down a sixth day beer because of your whiney stomach or precipitously low blood-sugar. Yes Of COURSE that's a good thing!

At night, sit around the fire with the new friends you made playing Jenga during the day, just like at drunk summer camp! You can tell drunk ghost stories and hold drunk hands with your new drunk acquaintances. The party continues until closing time or 'til someone is engulfed by flames, whichever happens first. (Lauren Evans) 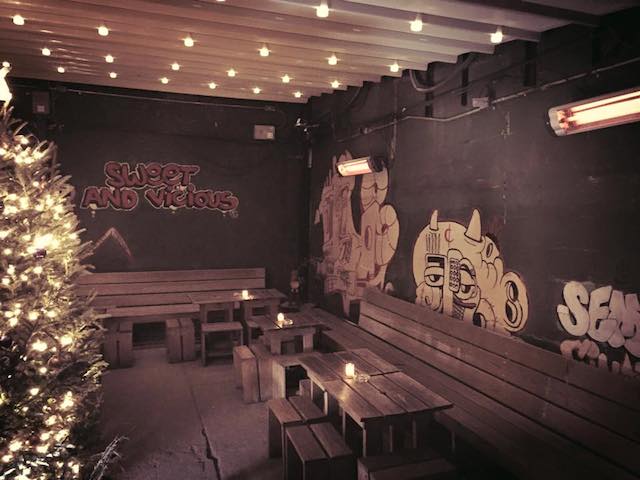 SWEET & VICIOUS: It's not easy to find a decent backyard in Manhattan—indeed, the borough's much better for scoring a stellar Midtown rooftop view than a ground-floor garden space. But surf bar-esque Sweet & Vicious offers a stellar, if small, backyard space for imbibing, complete with benches, tables, potted plants, and faux-street art.

Outdoor space aside, though, the real reason to frequent this place is for their infamously potent margaritas, served in a Mason jar and packing enough tequila to knock you out in one round. If you prefer your alcohol taste like cinnamon, there are plenty of Fireball shots on hand. Sweet and vicious, indeed.

Sweet & Vicious is located at 5 Spring Street between the Bowery and Elizabeth Street in Nolita (212-334-7915, sweetandviciousnyc.com). 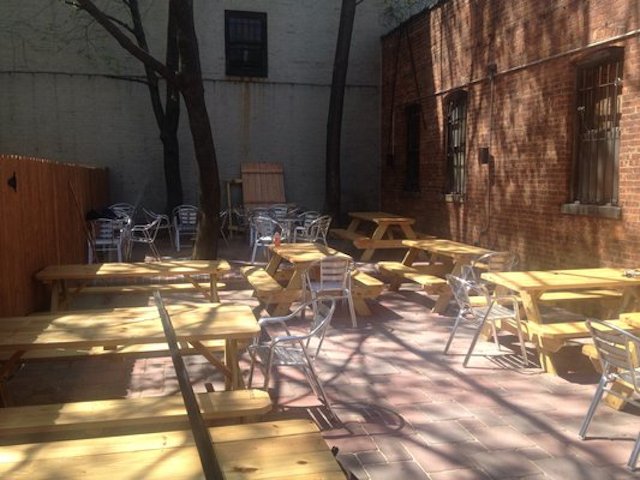 NOSTRAND AVENUE PUB: Dim and wood-panneled Nostrand Pub, which just celebrated its two-year anniversary, isn't much to speak of on the inside. (The booth tables, about the width of two downhill skis, make elbow-leaning difficult.) The yard, however, is a different story. Spread across two levels, the red-brick front section is strewn with picnic tables that start populating in the early evening. But while the groups can get rowdy, the back of the courtyard is stocked with small, round tables. Back there, it's perfectly acceptable to spend the afternoon by yourself, nursing $5 Narraganset drafts over a paperback. And while the pub doesn't serve food, you're welcome to bring your own. We recommend the goat roti from nearby Gloria's. (Emma Whitford)

LAVENDER LAKE: We loved Lavender Lake when it opened in Gowanus in 2012, and each year it's just gotten better. The big patio's stocked with wooden deck furniture, potted plants and other suburban outdoor comforts, making it feel like a friendly spot to sit outside and knock back a few drinks. They serve a rotating selection of craft beers like Founders All Day IPA and Kelso Pilsner, specialty cocktails, and other drinks, plus Lavender Lake offers a menu featuring tasty entrees, appetizers and bar snacks. Try the bar's classic angus beef burger and the kale caesar salad made with pine-nuts, sip a cold brew and enjoy the sunshine. 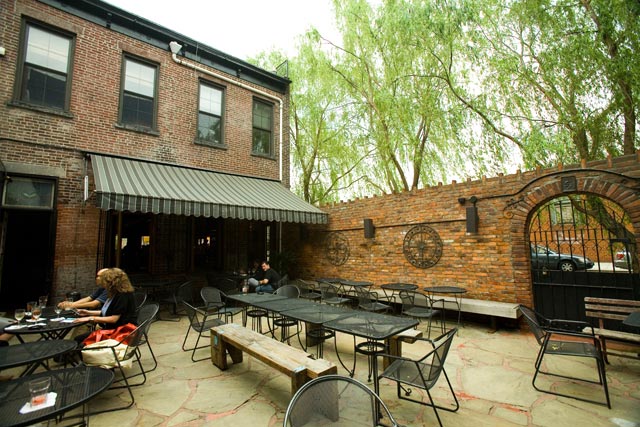 LIC BAR: We've long been fans of the little brick-walled backyard of this Queens pub, with its many tables to relax at. During happy hour from 4 to 7 p.m., domestic bottles, well drinks and pints of Heineken and Dos Equis are a mere $3, with ice cold margaritas only a few bucks more at $5. Arrive early and settle in for one of the live music sets the venue offers regularly, with outdoor shows starting once the weather warms up. (Nell Casey) 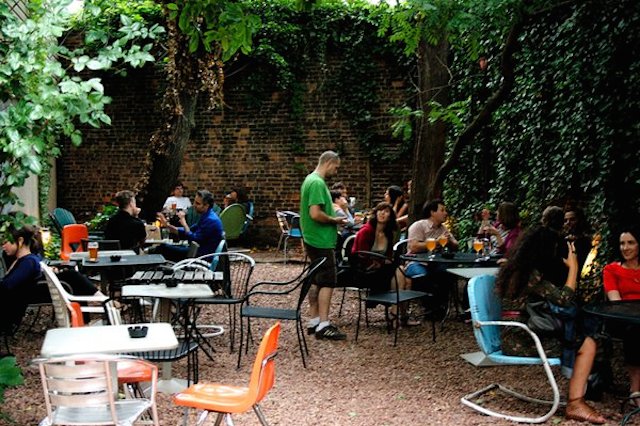 SPUYTEN DUYVIL: Fans of good beer sunshine flock to this Williamsburg oasis, whose patio comes replete with blossoming trees, brick walls, twinkling lights, and ample greenery. The bad news is, there's no liquor here, but the bar boasts some of the city's best Belgian and German beer, with rotating cask, tap and bottled offerings including Hopfenstark Blonde, Greenflash Palate Wrecker, and Achel. They've also got wine and charcuterie and cheese plates on hand, though, again, this is a beer bar, and prices aren't cheap, so you're better off sticking with their specialty. 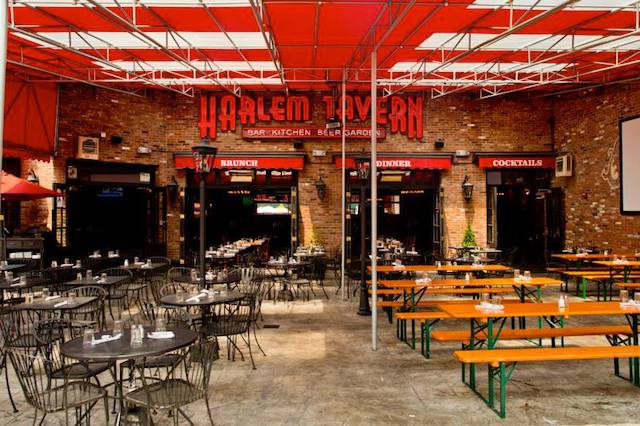 HARLEM TAVERN: Harlem Tavern's front-facing patio is packed to the gills in warm weather, with uptown folk and friends crowding umbrella-ed picnic tables and pounding burgers and beer. Booze here is a little pricey, though happy hour's (select) beers, well drinks and sangria are only $5 from 4 to 7 pm on weekdays. They've got the usual suspects on tap, like Goose Island, Shiner, Lagunitas and Shock Top, along with wines, cocktails and margaritas, and pub food includes basics like mac-and-cheese, po' boys and sweet potato fries. Still, the outdoor space is sweet as hell, plus they've got a solid brunch menu for morning dining al-fresco. 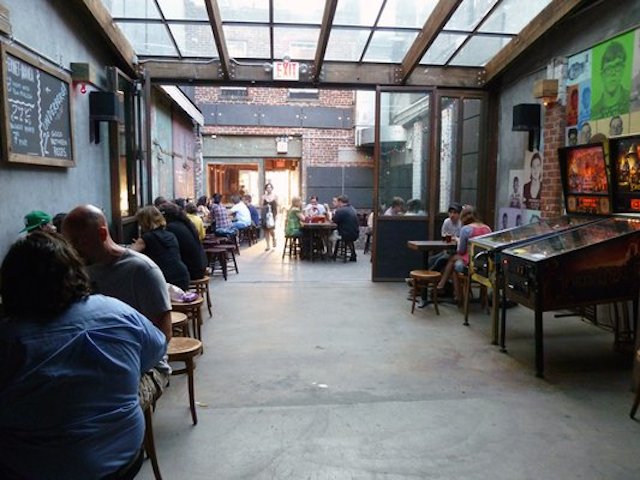 MISSION DOLORES: Mission Dolores doesn't so much have a backyard as it does a large drinking foyer. Patrons must first pass through this to get to the bar, which is relatively small and wedged in the back, much like Denethor's throne in that scene where Pippin swears his fealty to Gondor. But what Mission Dolores lacks in marble columns and singing hobbits it more than makes up for in a large selection of brews and the willingness of bartenders to fix you a Blood Mary at midnight on a Tuesday. Much of it is also covered, meaning you can enjoy its drafty charms in the dead of winter and summer alike. Bonus: Dogs are allowed, so bring your own or just pet one of the large selection you'll find milling about the grounds on a nice day. (Lauren Evans)

* Thanks to Nell Casey for her vast LOTR knowledge. 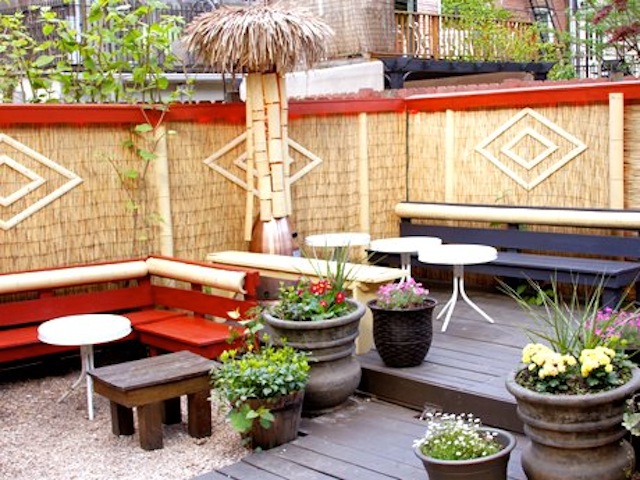 ZOMBIE HUT: This Carroll Gardens spot is technically a tiki bar, but while tiki bars can get a little overpriced and hokey sometimes, Zombie Hut's cheap, sugary frozen and island drinks make up for the kitschy plastic monkeys and drink umbrellas. The bar's backyard is outfitted with bright blue and red tables and benches, tiki-hut roofs and funky Pacific Island-themed torches and decor.

It's a fun little hidden gem, perfect for sharing a flaming four-person Scorpion bowl—a $26 monster of a concoction made with Bacardi 151, which arrives aflame and is packed with Bacardi 151 (a rum responsible for your very poor sophomore year performance in Macroeconomics) and brandy, or $5 sweet Mai Tais for the single drinker. Best of all, they've got a beefy selection of board games like Jenga and Apples-to-Apples, and free Goldfish to snack on when all that rum starts to go to your head.

Zombie Hut is located at 273 Smith Street between Degraw and Sackett Streets in Carroll Gardens, Brooklyn (718-875-3433). 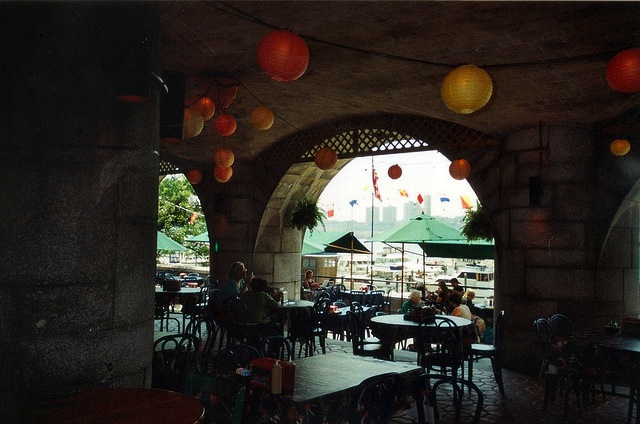 BOAT BASIN CAFE: The Hudson River might be filled with occasional sewage discharge and that headless dog I dredged up during my high school crew days, but it sure is pretty in the summer. And all that aquatic beauty is even better when appreciated with one of the Boat Basin Cafe's electric lemonades in hand, a vicious cocktail consisting of frozen lemonade, vodka and blue curacao. They've also got draft and bottled brews and standard lunch fare like burgers and grilled chicken sandwiches—just be prepared to fight off a few baby-toting breeders and some adorable doggies sniffing their way over from the dog run nearby. 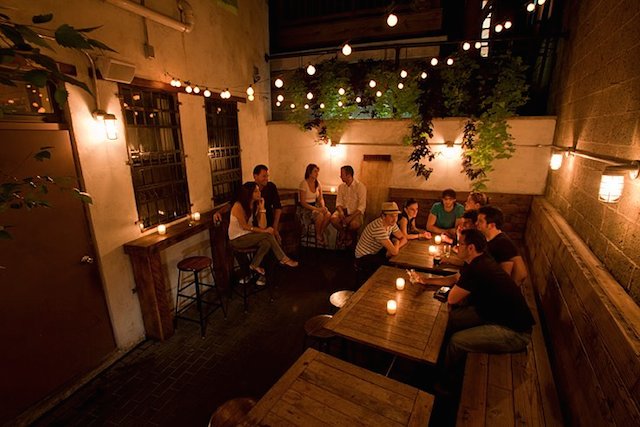 SWEET AFTON: This popular Astoria spot gets crowded as hell on weekend evenings, so it's quite fortuitous that the outdoor garden provides a respite from all the loud-talkers boozing inside. There's not much space here, but what's offered up is a lovely stone-walled cloister complete with wreaths and hanging plants, a perfect spot for imbibing cocktails like the Scotch-heavy Scotch Lodge ($10) and rye whiskey-spiked root beer ($9) paired with burgers, sandwiches, and baby back ribs. 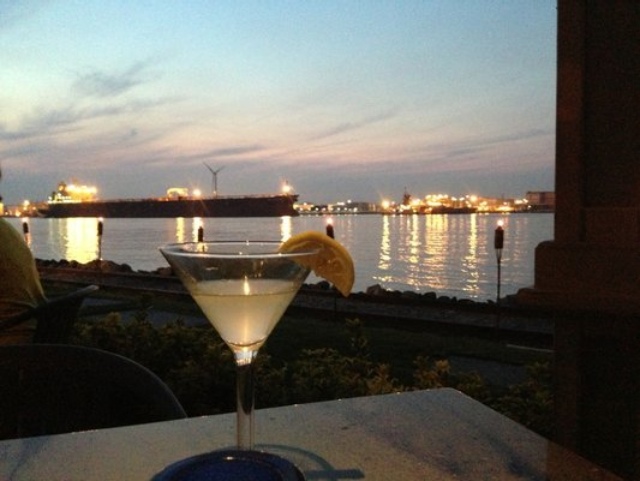 BLUE: Lest you forget, the Forgotten Borough boasts just as much waterfront territory as many of its other NYC sisters and this newly-renovated restaurant set against the Kill van Kull is but one reminder. What was formerly the somewhat run down RH Tugs has been transformed into a more sleek Mediterranean eatery that includes a seasonal patio replete with a pergola draped with plants.

Though the views across to NJ's industrial shores aren't the most scenic compared to other vistas, there's plenty of action to be seen as ships come and go from Staten Island's busy ports to keep the eyes occupied and away from the windmills and shipping crates beyond. And at night, when the facilities glow with an eerie light that beckons across the water, you can squint and pretend you're Jay Gatsby. (Nell Casey) 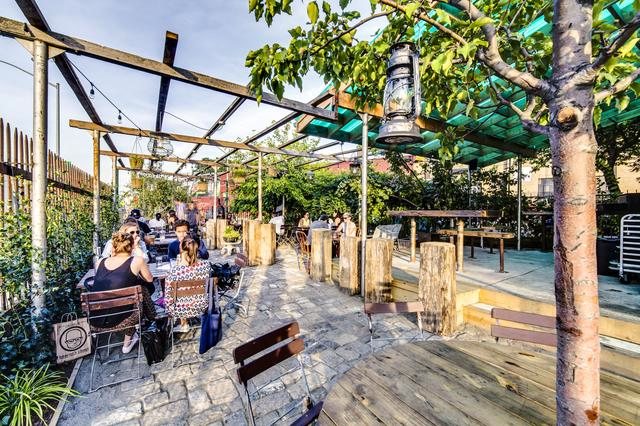 FORREST POINT: This Bushwick newcomer won us over when it opened last year, mostly for its incredible outdoor offerings. The lush, triangular space boasts fruit trees, swinging seats and a beautiful, twinkling twilight atmosphere. If it weren't for busy Flushing Avenue right beyond the wrought iron, you'd think you were in a secret garden.

But the bar has proven to be much more than its verdant exterior, offering incredible cocktails and delicious, unusual pub grub on top of that. The team wowed us with their excellent milk punches, and they're also making one of the borough's best new burgers, seared in a cast iron skillet and topped with pickles and a house-made sauce. (Nell Casey)