In the realm of desserts, the hierarchy is clear. Ice Cream > Cookies > Flan > Pie > Fancy Stuff > Cake. [Ed. note: flan is bad.] Bonus points to cookies, though, for being the only one you can carry around in your bag all day and it's still delicious when you break it out at the movies that night! Plus you're never too far from that sweet, chewy (or crisp!) satisfaction: there are a lot of excellent bakers in New York City, making a lot of excellent cookies. These, however, in no particular order, are the absolute best. 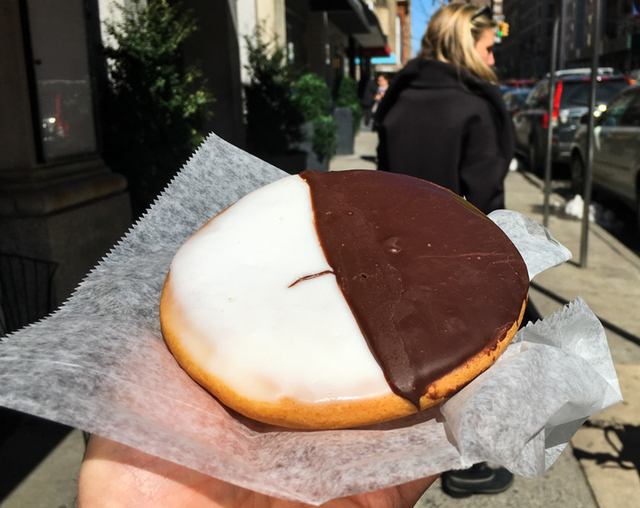 Black and White at William Greenberg ($3.50)
There are plenty of potentially contentious details to consider when you're talking about the classic NYC Black and White. Icing or fondant? Can the icing fall short of the cookie's perimeter? How lemony is too lemony? Is this even a cookie at all, or a slice of flat round cake? Be all that as it may, the best Black and White in town is on the Upper East Side, at kosher bakery William Greenberg. Here the sweet, intense fondant is spread thick (both the chocolate and vanilla sides are true-to-flavor and equally good), the cookie part is firm enough to qualify as such, and there's just the slightest hint of citrus in the mix. Makes for a perfect pre- or post-Met pick-me-up. 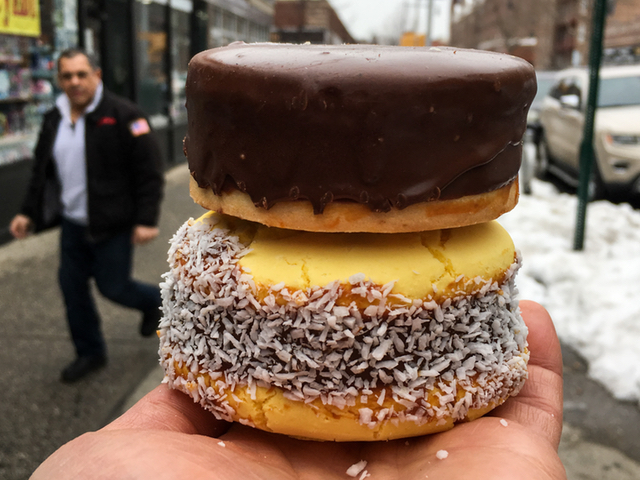 Chocolate Alfajores at La Nueva Bakery ($2.25)
Longtime Jackson Heights treasure La Nueva is the sort of place you wish was always right around the corner from wherever you are. Friendly and bustling, a gathering space that serves all sorts of excellent, inexpensive lunches, snacks, and pastries, this Uruguayan-owned bakery, among its other qualities, is also total heaven for dulce de leche fans, the dominant ingredient in any decent alfajor. All the varieties and sizes of that South American treat are superb here, but the massive chocolate-covered one might be the best, the thick coating smoothing out the even thicker center band of milk caramel and containing the crumbly cookie. Decadent? Por supeusto. But totally worth it. Oh and not inconsequentially, La Nueva also makes the best empanadas in town. 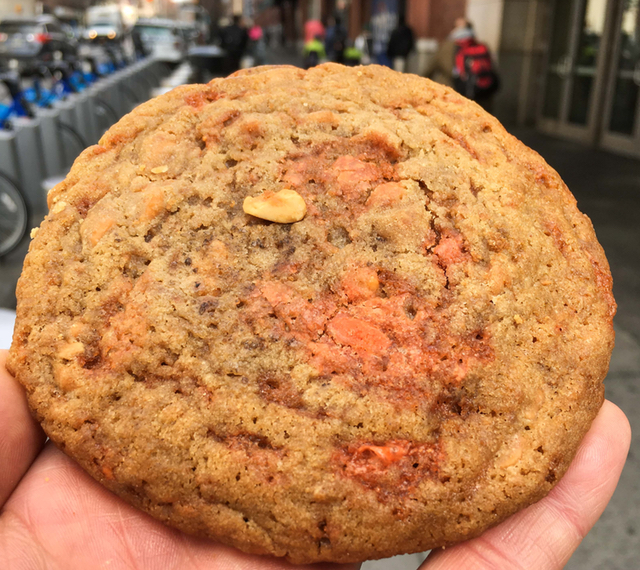 Sticky Fingers at Rubyzaar Baked ($3)
The excellent folks at Rubyzaar Baked have expanded their offerings to include things like grilled cheese and frozen cheesecake pops (which are awesome, by the way), but the core of the operation remains their fantastic cookies. I like them all, so follow your sweet-treat dream—and the often punny names involving classic rock songs/artists are actually amusing (eg, Doris Gets Her Oats)—but my current favorite is possibly the Sticky Fingers, with smoked salt and that criminally under-utilized ingredient, butterscotch. A lot of love goes into these beauties, and they're always more subtle, and even sophisticated, than you expect.

Rubyzaar Baked has a booth at Smorgasburg on both days every weekend, starting on April 1, as well as a couple of select cafes (rubyzaarbaked.com) 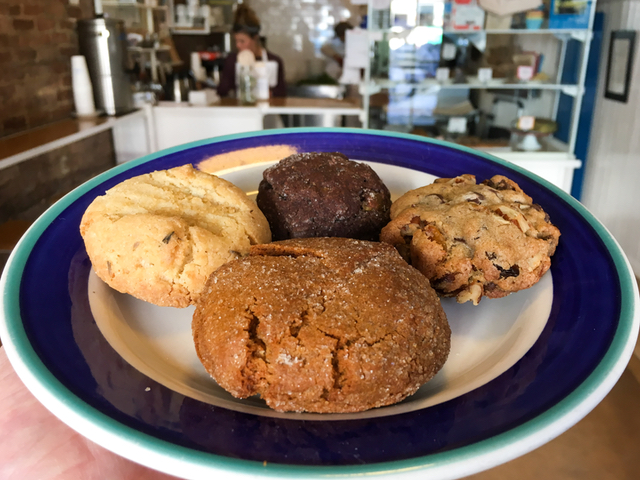 Ginger Molasses at Saltie ($2)
The good people of Williamsburg's Saltie make some bad-ass sandwiches of course, but don't snooze of their first-rate baking prowess. They offer up four cookies, which you can order individually or as a full Cookie Quad sampler. They're all great, even the weird lavender one, but the most excellent is the Ginger Molasses, a flavor that doesn't get nearly enough play in this town. The texture is chewy and soft with a slightly crisp exterior; the ginger zings, the molasses sweetens and soothes, and it works wonders as an off-beat treat. 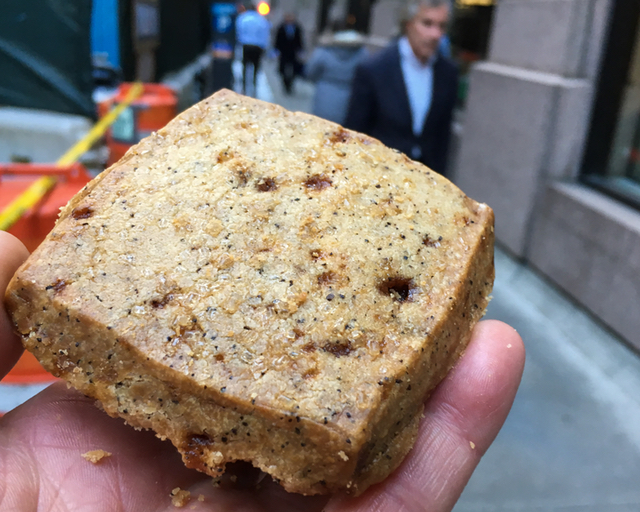 Stumptown Shorty at Ovenly ($3.50)
Erin Patinkin and Agatha Kulaga recently revealed their master plan for taking over the planet and I totally can't wait. Because even after seven years and lots of new competition, their beautiful creation Ovenly remains possibly the absolute best all-around bakery in the city. Cookie-wise, Ovenly is most famous for its Salted Peanut Butter--and rightly so: it is a sublime cookie, especially when you get it fresh at the mothership in Greenpoint--but it's the Stumptown Shorty that really thrills my senses. The shortbread's incredibly rich and buttery, with caramelized burnt sugar and ground espresso beans adding multiple layers of flavor and crunch.

Ovenly is located at 31 Greenpoint Avenue between West Street and Transmitter Park, with a kiosk at UrbanSpace Vanderbilt Market as well (888-899-2213; oven.ly) 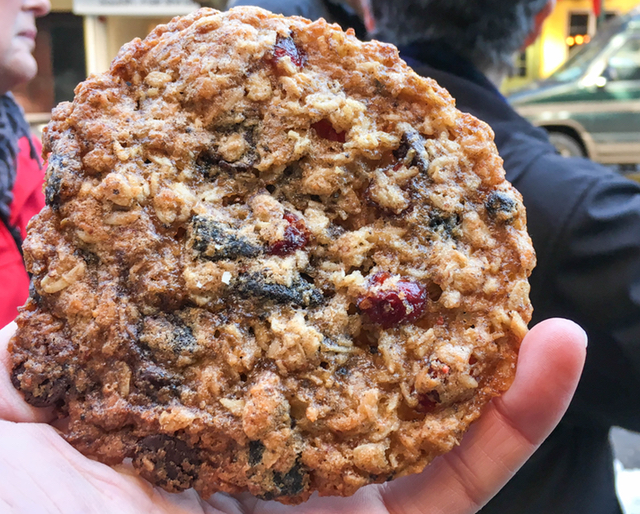 Kitchen Sink Cookie at Macaron Parlour ($2.25)
The macarons at Simon Tung and Christina Ha's shop are terrific, of course, probably my favorite such treats in the city, but honestly I think I like their other baked goods even more (if Ha's offering Monkey Bread the day you go, just get it and don't worry about the calories). But also get the Kitchen Sink cookie, which nails that perfect, lacy, crisp-and-chewy texture and combines coconut, oatmeal, cranberries, bananas, chocolate, and freakin' Oreos into a delicious, somehow not-overwhelming whole. Total magic.

Macaron Parlour is in NEW LOCATION, at 44 Hester Street right next to Ha and Tung's Meow Parlour, and at 560 Columbus Avenue on the Upper West Side (macaronparlour.com) 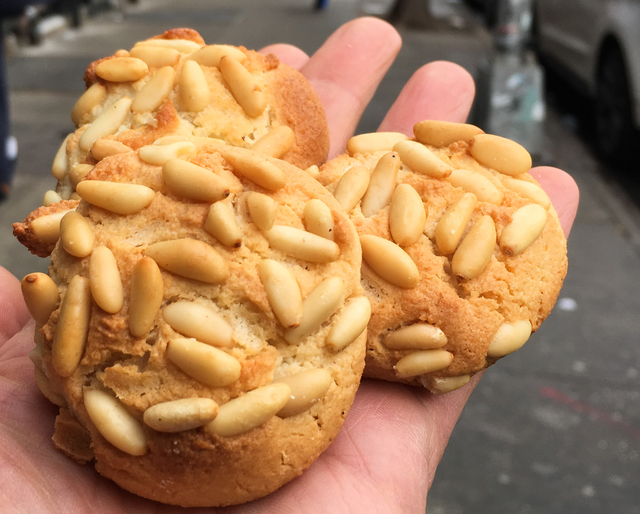 Pignoli at Veniero's ($24 per pound, or about $1.55 each)
Italian cookies vary widely in their appeal, but I think we can all agree that, when presented with a mixed platter of the bite-sized treats, you should always take the Pignoli. And while there are many good pignolis all over the city, the best I've found are at Veniero's, the venerable Italian pastry shop—since 1894!—in the East Village. Sweet and nutty, moist and pliant, a tiny bit oily and dangerously addictive, these little beauties are never anything but supremely satisfying. 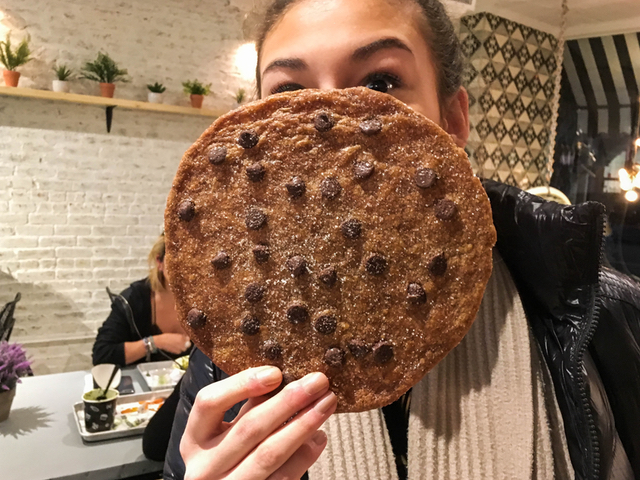 Cinnamon Espresso Chocolate Chip Cookie at by CHLOE ($2.50)
The smash-hit vegan chain by CHLOE does a lot of things really well, and one of those things is their amazing, bigger-than-your-head Cinnamon Espresso Chocolate Chip Cookie. Satisfyingly crisp with added crunch from sugar crystals sprinkled on top, this wonderful monster doesn't skimp on the sweet carob chips either (non-vegans: you totally don't miss the milk... or the butter), making it an eminently shareable sweet snack as well.

The original by CHLOE is at 185 Bleecker Street at the corner of MacDougal, with other NYC locations in the West Village, Soho, Flatiron, Williamsburg, and a sixth coming soon to Rock Center (eatbychloe.com)

Chocolate Chip at City Bakery ($3)
It's been nearly three decades since the indomitable Maury Rubin opened City Bakery near Union Square, leaving behind a life in television to feed the city pretzel croissants, hot chocolate, caramelized chunks of French toast, and, of course, this chocolate chip cookie. Craggy and buttery with loads of dark chocolate and crunchy sugar crystals for added fun, Rubin's creation still has the power to buckle my knees, even after all these years.

The City Bakery flagship is located at 3 West 18th Street between Fifth and Sixth Avenues, with satellite Birdbath bakeries in Nolita, Midtown, Tribeca, Soho, and the Upper West Side (212-366-1414; thecitybakery.com) 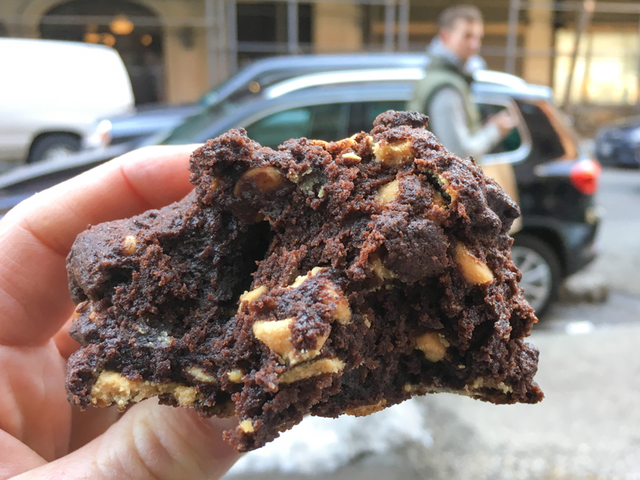 Dark Chocolate Peanut Butter Chip at Levain ($4)
Another OG of the Best NYC Cookie game, Levain has been plying its six-ounce monsters on the Upper West Side since 1995, ever since founders Connie McDonald and Pam Weekes invented these fat, cram-packed treats to add extra calories (and deliciousness!) to their Ironman Triathlon training routine. See?? It's health food! Anyway, some will tell you that the Chocolate Chip Walnut is the best Levain beast, but they are wrong: the Dark Chocolate Peanut Butter Chip is the clear winner, even though it doesn't Instagram nearly as well.... which, considering the outrageous, out-the-door lines that have appeared at all hours these past couple of years, is not an insignificant consideration with a lot of these new Levain lovers.

Levain is located at 167 West 74th Street between Amsterdam and Columbus, with a newer outpost in Harlem at 2167 Frederick Douglass Boulevard (212-874-6080; levainbakery.com) 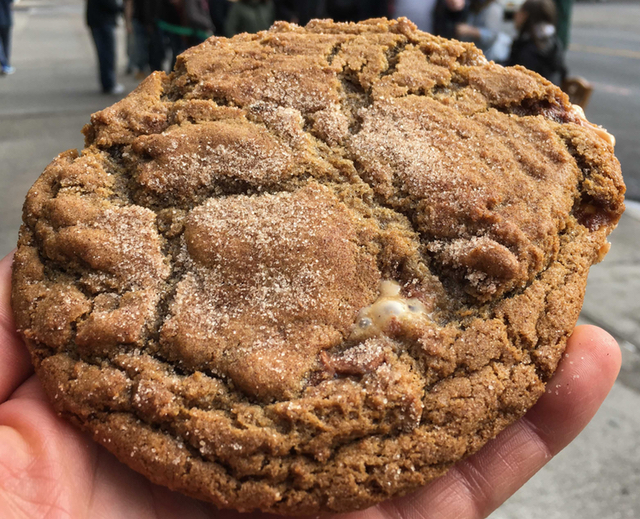 Rolo Snickerdoodle at Queens Comfort ($3.50)
Montana D'Alessio Barbieri, aka the Donut Diva, is the official baker for the hugely-popular Queens Comfort, and a big reason why everyone always leaves the place full and happy. In addition to showing up with some of the city's best doughnuts every Sunday, Barbieri also feeds cookies to hungry Astorians a couple of days a week, and her creations are outstanding examples of the "super-sweet with big chunks of stuff in them" genre. The most recent Donut Diva cookie I had was her Rolo Snickerdoodle (featuring chocolate and actively gooey caramel and lots of butter and cinnamon) and it was absolutely delicious and basically a week's worth of dessert in every bite.

S'mores at Milk and Cookies ($2.85)
Milk and Cookies, a cute cafe on one the West Village's prettiest streets, got its start before social media spawned its armies of food-shooting influencers. Which is maybe why the place always feels a bit under-the-radar? Either way, baker Tina Casaceli puts out a huge array of appealing cookies every day, in flavors both classic and complicated, but when I'm only getting one, I get the S'Mores. The expected gooey marshmallow pockets and melty chocolate chips are inside, of course, but its Casaceli's addition of Honey Grahams embedded on top that make this creation extra-special.

Milk and Cookies is located at 19 Commerce Street between Bedford and Seventh Avenue South (212-243-1640; milkandcookiesbakery.com) 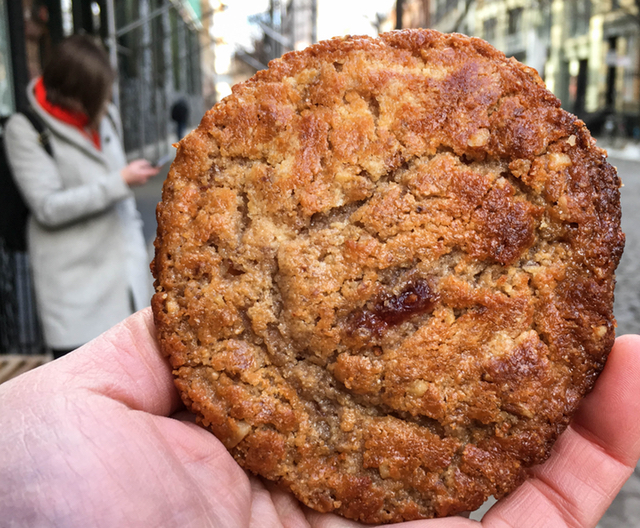 Peanut Butter and Jelly at The Smile ($3.25)
Even if you, like me, aren't really hip enough to hang at NoHo's sceney cafe The Smile, it's still well worth a trip into the subterranean space to grab a couple of cookies and maybe a coffee to go. The Chocolate Chip gets a lot of play here (and rightly so; it is very good) but the truth is it's the crazy-dense Peanut Butter and Jelly that's The Smile's best cookie, filled with coarsely ground nuts, actual peanut butter, and pockets of sticky strawberry jam.

The Smile is located at 26 Bond Street between Bowery and Lafayette, with Smile To Go a few blocks downtown at 22 Howard Street (646-329-5836; thesmilenyc.com) 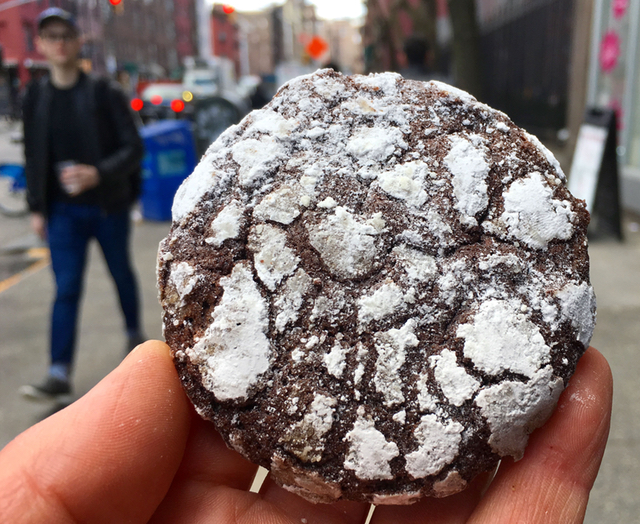 Chocolate Explosion at Mah-Ze-Dahr ($2)
It's been well established that I love Umber Ahmad and Shelly Barbera's West Village parlor of baking magic, Mah-Ze-Dahr. Really: the textures and flavors they coax out of those mixing bowls and ovens in the back is extraordinary, and across all sorts of different types of pastries. As far as cookies go, Mah-Ze-Dahr offers several varieties that could qualify for absolute best anywhere award, including a playful riff on the Black and White, but I'm giving the nod today to the amazing Chocolate Explosion, with its crackling exterior, fudgie insides, and deep cocoa flavor. 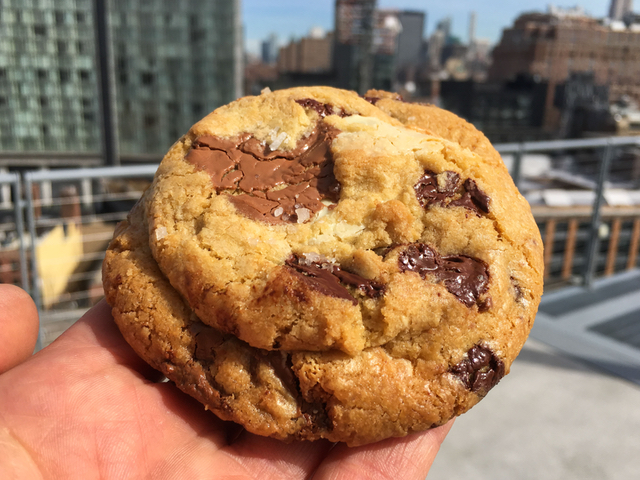