The 14 Best Comfort Foods In NYC

Over the past couple of months, I've eaten a ton of classic comfort-food dishes around the city to compile this thorough roundup of deeply satisfying eats. These are the best examples I could find, in a wide range of categories.

Two caveats. The restaurant itself had to feel comfortable and welcoming for inclusion here, so even though, for example, Rubirosa makes a terrific plate of Spaghetti and Meatballs, and Morgenstern's scoops up a Banana Split for the ages, both of those spots are usually too hectic and scene-y to enjoy for these purposes. I also didn't include any ramen, french fries, queso, noodles, doughnuts, soup dumplings, egg sandwiches, nachos, or barbecue, because the recent lists we've done in those categories are all still pretty valid.

As always, in the spirit of love and solidarity with your fellow New Yorkers, share your own favorites in the comments. 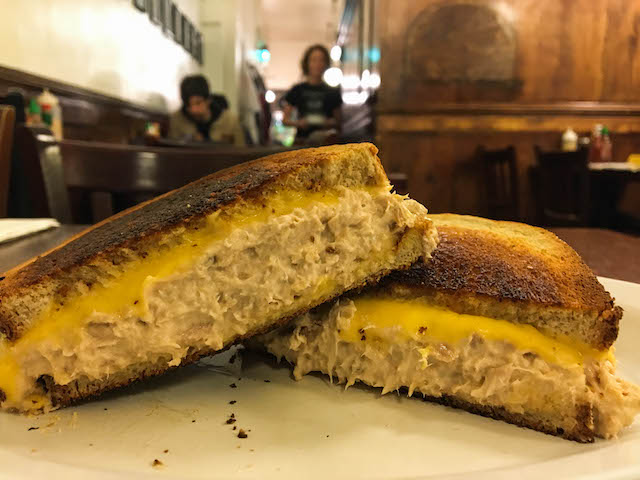 TUNA MELT AT EISENBERG'S SANDWICH SHOP: One of the city's great treasures—"Raising New York's Cholesterol Since 1929"—Eisenberg's across from the Flatiron Building exudes an old-school charm, complete with seen-it-all service. You're going to happy no matter what you eat here, but the almost ludicrously thick and delicious Tuna Melt ($8) is a true hall-of-famer. The tuna is creamy and blessedly unadorned, the cheese is American and melted thick, the toast (in my case, rye) is just on the correct side of burnt. Get it with Eisenberg's thick tomato soup, for obvious reasons. And come here often, to make sure it stays in business forever. 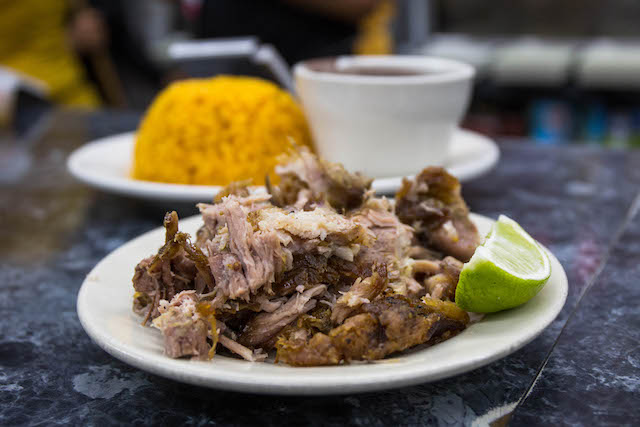 PERNIL AT 188 BAKERY CUCHIFIRITOS: Lunch counter Puerto Rican/Dominican/Cuban spots were everywhere on the Upper West Side in my youth. These were places where a platter of pernil with black beans and yellow rice cost about five bucks and would fill you up for days. They've disappeared in the years since, but up in The Bronx the pig-eating dream is alive and well thanks to friendly, bustling joints like 188 Cuchifritos, which was made semi-famous when Anthony Bourdin brought his TV crew here in 2014. 188 Cuchifritos serves, among many other very good things, a first-rate version of the classic pork shoulder dish ($8.50). Loaded with crackle and fat and further enlivened by any of the vinegary hot sauces at your disposal, this pile of pernil satisfies all of your most basic desires, at least temporarily. 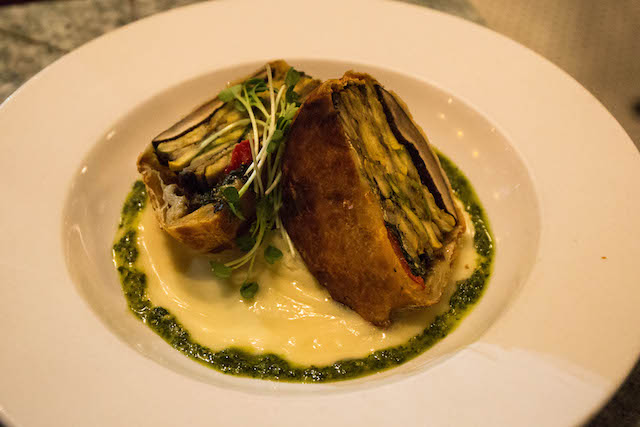 VEGETABLE WELLINGTON AT WATTY AND MEG: With its rustic, salvaged-material decor and a menu that includes house pickles and popcorn, Cobble Hill's Watty and Meg is a borderline Brownstone-Brooklyn cliche. But the genuinely warm staff and decent food will quickly turn your cynicism into comfort, especially if you order chef Mary MacGrath's excellent Vegetable Wellington ($21). Tuck into these multiple layers of roasted veggies and mashed potatoes, all encased in a soft, chewy pastry and sitting in concentric pools of cheese fondue and pesto, and brace for deep waves of pleasure.

Watty and Meg is located at 248 Court Street between Baltic and Kane Streets in Cobble Hill, Brooklyn (718-643-0007; wattyandmeg.com) 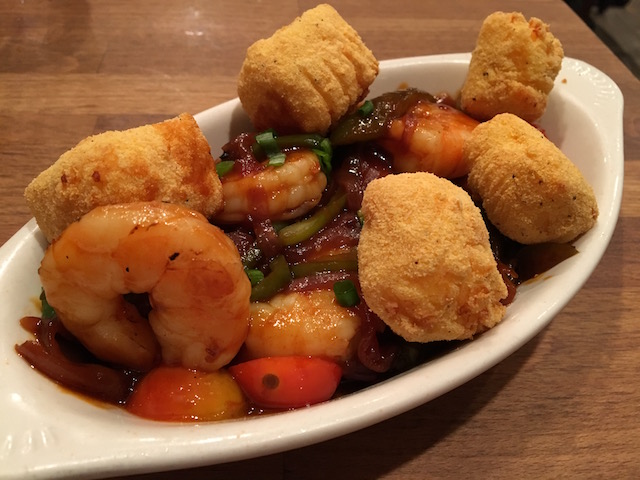 BARBECUED SHRIMP AT PEACHES HOTHOUSE: This Bed-Stuy Southern-food joint is everything you'd want in a neighborhood restaurant. It's friendly and fun, and always lively with locals, but the food is also good enough to make it something of destination, with folks from all over the city (and, thanks to tourist guides, the world) coming to check out the goods. The HotHouse fried chicken is some of the best in town, but it's the plate of Barbecued Shrimp ($11) that I actively crave between visits. Listed under starters, the dish features a half dozen or so plump, tender crustaceans swimming in a sweet and spicy sauce, with a mess of onions and peppers giving it some bite and mini grits cakes for extra flavor and heft. It's really big enough for an entree—maybe with a side of Mac-n-Cheese?—but you should still get some of that Nashville style Extra Hot Chicken. 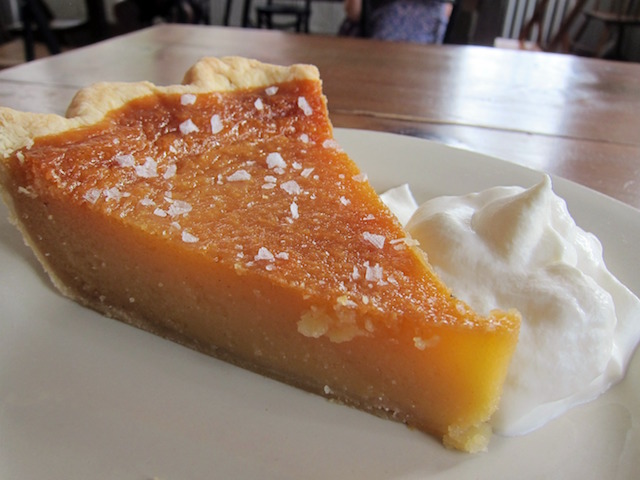 SALTY HONEY PIE AT FOUR AND TWENTY BLACKBIRDS: Even in the face of rapid development in the area, the Gowanus location of the best all-around pie place in NYC remains out-of-the-way enough to maintain its cozy, generally low-key vibe. The kitchen is incapable of making anything but top-notch pastry, so whatever you think sounds good on the rotating pie menu will, in fact, be good. But the pie I always come back to is the Salty Honey ($5.75). It's got the thick, custardy consistency of a chess pie (of which they make an superb chocolate version, by the way), the crust is chewy perfection, and it nails that sublime sweet-salty combo. Always say, "yes please," when offered a dollop of homemade whipped cream. 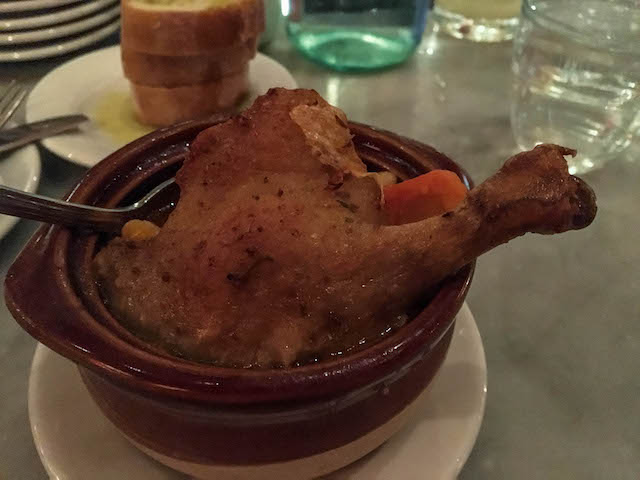 CASSOULET AT BUVETTE: While it is true that you would never call any of the individual, crammed-together seats at Buvette "comfortable," it's also true that Jody Williams's Grove Street bistro makes up for its lack of plushness with an intoxicating charm, general bonhomie, and wonderful French comfort food. My favorite thing on the menu is the Cassoulet ($18), a modestly-sized but enormously pleasurable stew featuring a whole duck leg and a thick disc of gloriously fatty pork sausage. I could probably eat this every night, all winter long, and be happy. My second favorite thing is Williams's Chocolate Mousse, which is both densely flavored and impossibly fluffy, and also probably deserves a place on any best comfort food list.

Buvette is located at 42 Grove Street between Bedford and Bleecker Streets in the West Village (212-255-3590; buvette.com). 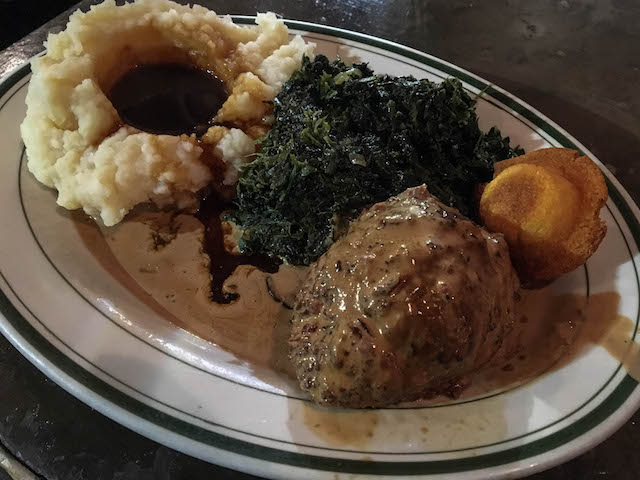 MEATLOAF AT PETER'S SINCE 1969: Hanging strong in the heart of ever-changing Bedford Avenue, Peter's Since 1969 is essentially your dream cafeteria come true. They've got an array of home-cooked meats and sides kept simmering in creusets behind the counter, ready to be spooned out in generous fashion on to old-school china plates. The Meatloaf ($12.95), my go-to here, is really more of a patty, but its texture and seasoning is unmistakably loaf-like and, when paired with gravy-covered mashed potatoes, a mound of dark spinach, and a sweet corn biscuit, makes you wonder why you ever even bother cooking in that tiny kitchen of yours back home. 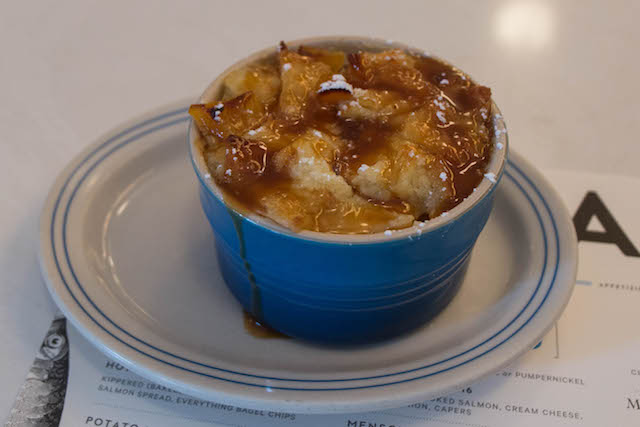 CHALLAH BREAD PUDDING AT RUSS & DAUGHTERS Russ and Daughters pulled off a nifty trick in 2014 by expanding and enhancing their nearly century-old presence on the Lower East Side with a roomy, comfortable new "cafe," all without losing any of the old-city character and loving attention to the appetizing that make them such a NYC icon. There's comfort food galore here, but no matter what you eat, save room for the Challah Bread Pudding ($9), which is just as chewy, moist, and sweet as you'd hope it could be. It's punctuated with bits of dried apricot (a genius upgrade from raisins) and oozing rivers of a salted caramel topping.

Russ and Daughters Cafe is located at 127 Orchard Street between Rivington and Delancey Streets on the Lower East Side (212-475-4880; russanddaughterscafe.com) 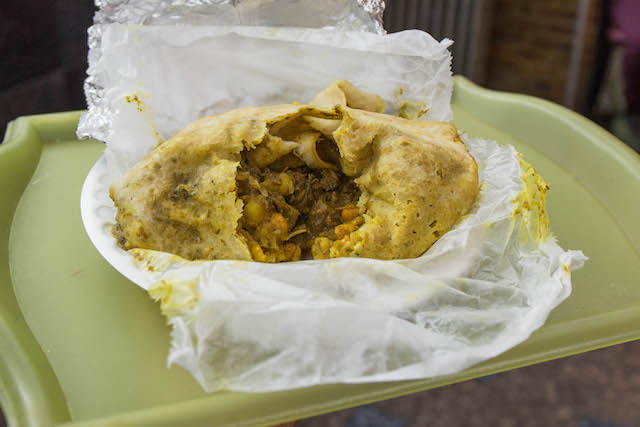 CURRY GOAT ROTI AT GLORIA'S: Roti spots are as common as slice joints in this neck of the Crown Heights woods, and some of the best of these redolent and hearty Caribbean wraps can always be found at this festive Nostrand Avenue institution. The seating is minimal and bare-boned—you order at the counter and grab whatever chair or stool you can—but the crowd is friendly and chatty and the room so toasty in winter that your glasses fog up upon entering. Get whatever roti filling speaks to you because it's all so good, but may I recommend the fiery Curry Goat ($8.50), with loads of tender and gamey meat (watch out for bones though... and then be sure to suck out their marrow when you find them) balanced with potatoes and chick peas all bundled in those thin chewy layers of delicious roti bread.

Gloria's is located at 764 Nostrand Avenue between Sterling and Lincoln Places in Crown Heights (718-773-3476; glorias-hub.com) 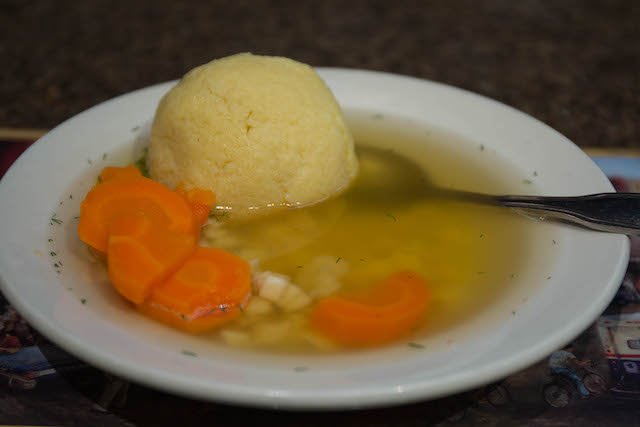 MATZOH BALL SOUP AT 2ND AVE DELI: Though its new locations on the Upper East Side and Kips Bay will never be able to capture the chaotic feel of the original, make no mistake: the food at 2nd Ave Deli is just as good as you remember. No matter whatever else I ever get here, I always order the Matzoh Ball Soup ($8.95), whose chicken broth is exactly greasy enough, with a huge matzoh providing carbs, flavor, and fat, and bits of carrots adding a touch of sweetness to the proceedings. 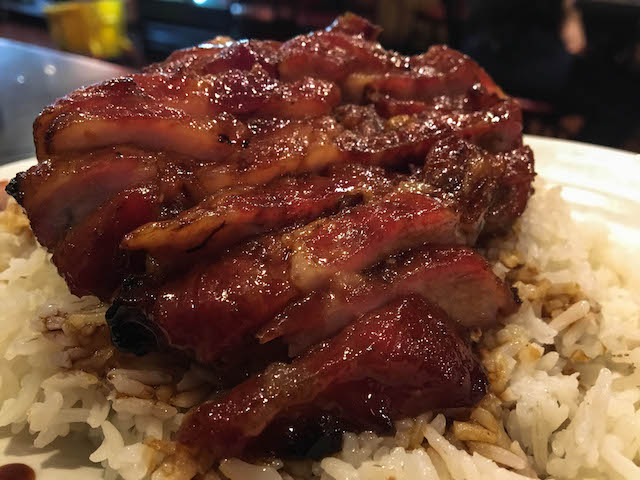 ROAST PORK ON RICE AT BIG WONG: There are a million decent pork dishes to be had in Manhattan's Chinatown, but one that will never let down is the simple but oh-so-satisfying Roast Pork on Rice ($3.75) at Big Wong. The floor here is slick with grease, and the overall decor is, basically, non-existent. But the servers are total pros and the roasted meats all terrific, led by the cold, tender, and sticky-with-sauce pig served over a mound of warm, perfectly-cooked rice. You'll probably order one to share, and then regret that you have to actually share it. 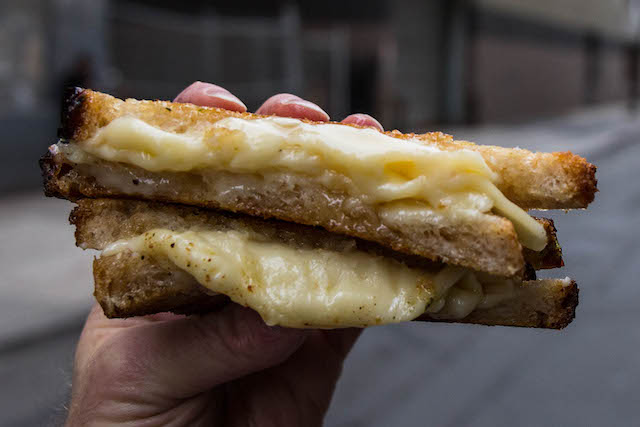 MAPLE GRILLED CHEESE AT SNOWDAY: Ok, so standing around outside a food truck, even one as cool-looking as Snowday, isn't exactly the most physically comfortable way to dine. But in addition to making truly excellent food (three Vendy awards can attest to that), Snowday's modus operandi involves providing jobs and long-term career training for formerly incarcerated youth, which righteous is enough to inspire a warm and fuzzy feeling inside that more than makes up for any lack of amenities. Everything is great here, but the signature Maple Grilled Cheese ($7) is renowned for a reason, with its sharp cheddar oozing between Shewolf sourdough slices and drizzled with sweet and sticky New York maple syrup. This is still my favorite grilled cheese in all of NYC. 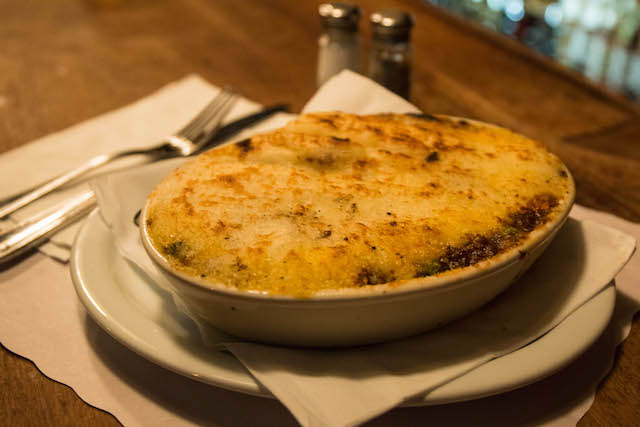 SHEPHERD'S PIE AT MOLLY'S: Molly's has been Molly's since 1964, but the room itself has been serving liquor and wild Irish spirit since as far back as 1895. And don't let the fratty-bar neighborhood dissuade you from checking out this spot, since at suppertime the place is filled with neighborhood grown-ups enjoying a pint or three and tucking into one of the best pub menus in town. The burger receives a lot of praise, but get the Shepherd's Pie ($19) instead, a generously portioned casserole of seasoned ground beef, a scattering of peas and carrots, and a thick layer of golden-brown mashed potatoes on top. Grab a spot by the ancient fireplace for added warmth and delight. 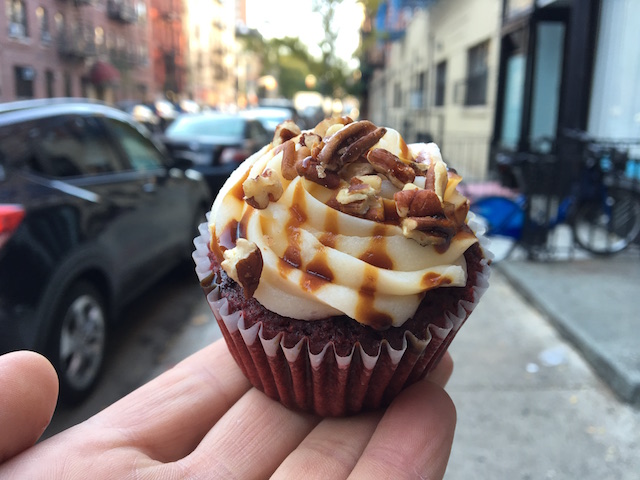 CUPCAKES AT SUGAR SKETCH: The best cupcakes I've had in recent months come from Martina Nardo's Sugar Sketch in the East Village. For each of her many creations available at this simple shop (which is mostly kitchen), Nardo takes some kind of fluffy cake, fills it with something sweet and gooey, and tops it off with both icing and crunchy bits. Like the Red Carpet ($3.50), for instance, which combines red velvet cake, caramel pecan filling, cream cheese frosting and pecans, and is, dare I say it, totally scrumptious.