The 13 Best Pie Places In NYC

Pie may get the most attention around the winter holidays, but really folks, is there a bad time of year to fork into a slice of banana cream or apple or blueberry or...? No, of course not. Thankfully, despite some longtime favorites caught slipping during recent research (looking at you Milk Bar Crack Pie), there remain many excellent suppliers of sweet slices in this town. Here are the 13 of the best. 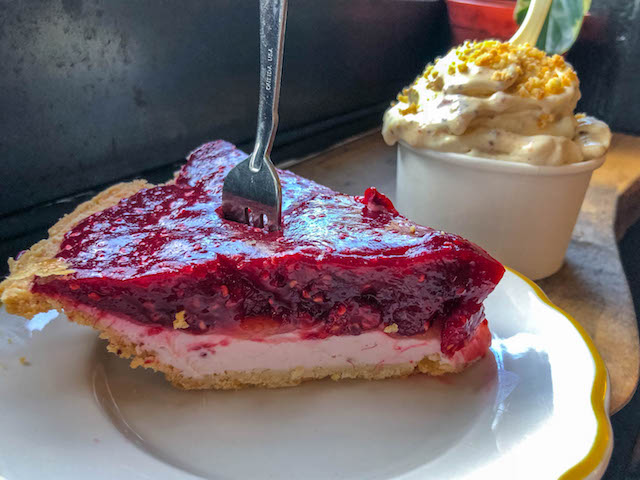 Petee's Pie Pastry magician Petra Paredez recently committed to a major (and lovely!) expansion of her operation with an expansive Clinton Hill cafe, complete with garden in the back. Don't worry though, Paradez has plenty of love to go around, and her pies at both shops are as knee-bucklingly good as ever. Literally every slice of Petee's I've eaten since 2014 has been amazing, including the three (3) I had last week. And don't miss Petee's new Slice Cream, available only on Delancey, where any slice in the shop can be mixed into three scoops of homemade vanilla ice cream. 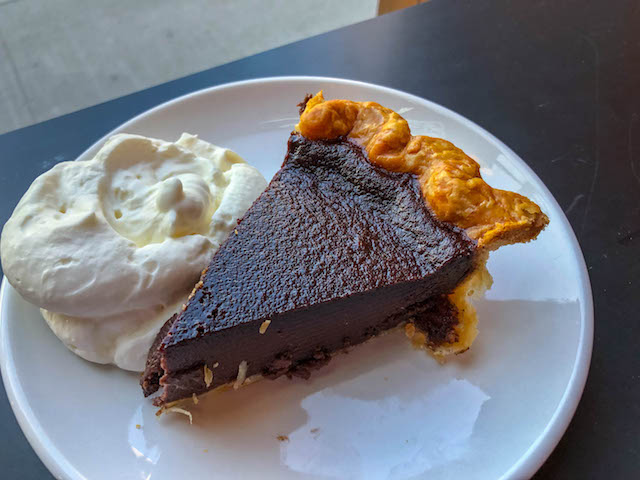 Four & Twenty Blackbirds Since 2009, pie masters Melissa Elsen and Emily Elsen have been baking up their incredible (and incredibly rich) creations in Gowanus—the Salty Honey slice, for one, is a legitimate NYC classic. They, too, have recently expanded, with a new counter-spot in Prospect Heights that also serves wine and beer. Fortunately, increased quantity hasn't effected their as-usual high quality in the least, as a couple of recent slices confirmed. 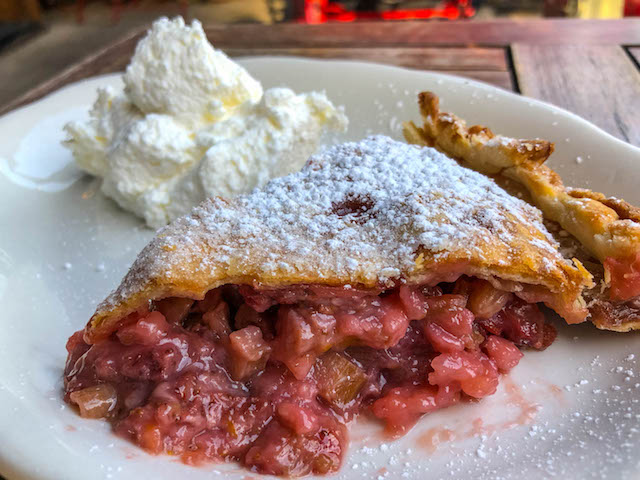 Bubby's Perhaps the most underrated pie in town can be found at these two bustling comfort-food restaurants, the original family spot in Tribeca and the tourist-clogged outpost at the southern end of the High Line. For maximum enjoyment, go to either Bubby's during off-hours when it's a little more subdued (the outdoor tables in the Meatpacking District are particularly enjoyable) and tuck into a slice of one of these wonderfully flaky, buttery, overstuffed delights. The fruity varieties are particularly good here. Comes with a small mountain of sweet whipped cream. 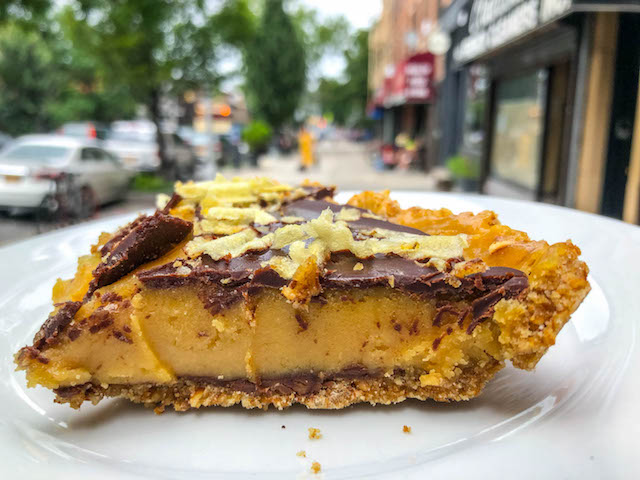 Daly Pie Meghan Daly has been providing pie to pastry-loving New Yorkers since 2011, but it was the opening of her cheery, vaguely bohemian Prospect Heights shop two years ago that really cemented her status as one of the city's top bakers. There's usually a half dozen or more options available daily at Daly, and they're all usually good, but if you only go here once the thing to get is the unfortunately-named "Case of the Mondays," a thick, candy-bar rich creation that combines peanut butter, chocolate, Nutella, and bits of salty potato chips for exactly the sort of full-on dessert you deserve. 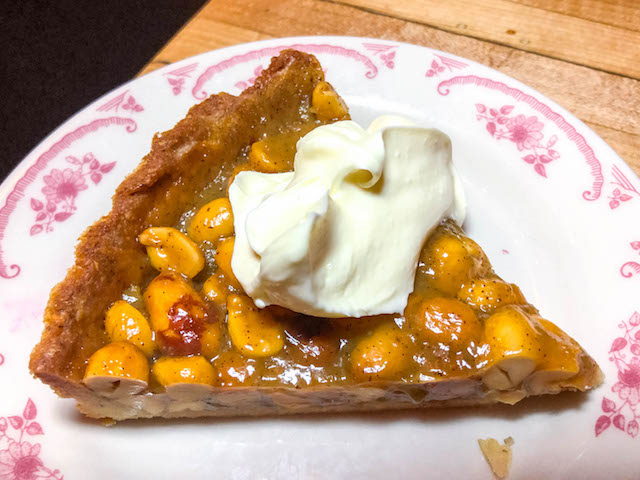 Houseman I've loved everything I've ever had at this restaurant, and if the prices were all a little lower (and the location less remote) I'd be a regular. That said, after full-on swooning over pastry chef Alicia Harrington's Peanut Tart the other night, I might have to swing by for a splurge more often. This gooey, crunchy, buttery beauty is like the peanut brittle of your dreams, and the whipped, fluffy dab of sour cream adds an unexpected and wholly welcome bit of tang to the party. 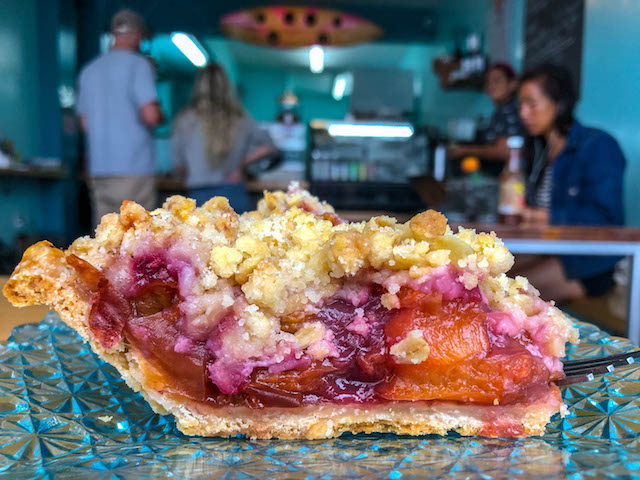 Rockaway Beach Bakery Tracy Obolsky makes lots of really delicious things at her beachy spot right on the Boulevard, but if she has any pie in the case when you show up, you should definitely get a slice of whatever's still available. As with any Obolosky jam there's tons of butter involved here, but she allows the fruit—on a recent breakfast visit, raspberry and nectarine—to really shine. There's now a pleasant little patio in the back, too, plus you can get beer and wine after noon each day. 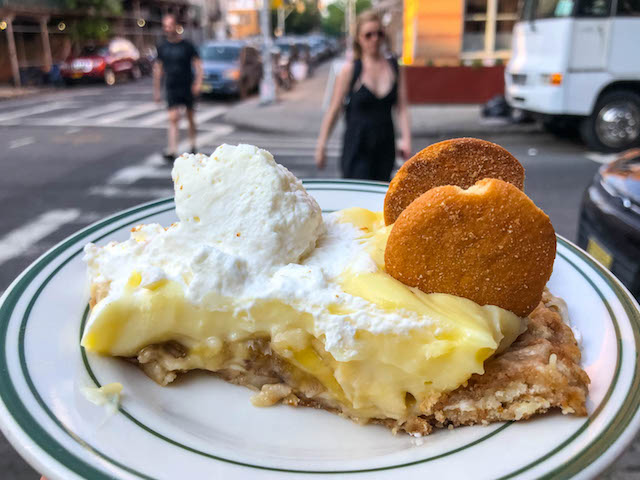 Pies 'n' Thighs Hard to believe it's been a dozen years since Sarah Sanneh and Carolyn Bane first set up shop in a beer storage closet under the Williamsburg Bridge, so many good times, great fried chicken dinners, and fantastic slices of pie ago. But what's really remarkable is how consistently satisfying this restaurant still is, even as many of their mid-aught peers have fallen off in quality or closed down. Take this slice of their famous Banana Cream pie, which I wolfed down with glee recently on the bench outside their Williamsburg establishment. So luscious, so bursting with flavor, so perfect in every way. Never change, Pies 'n' Thighs. 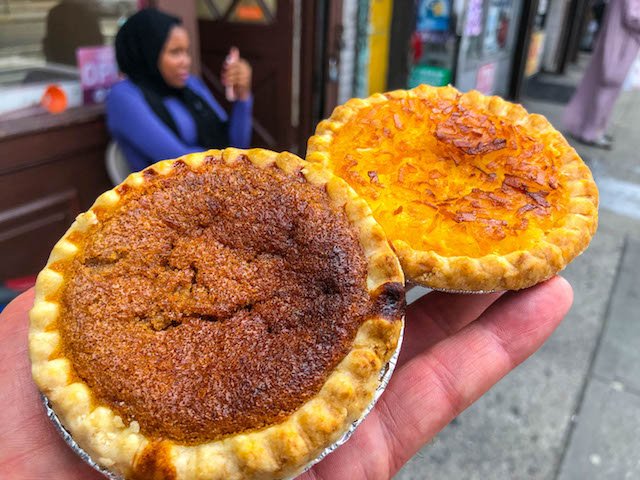 Abu's Bakery This no-frills, family-owned Bed-Stuy shop is apparently the only place in New York City that still bakes up Navy Bean Pie. The dessert is steeped in the history of Muslims in America — according to an episode of Who's Afraid of Aymann Ismail, the pies were created in the 1930s by the Nation of Islam. Historical importance aside, these lovely little things taste terrific, with a filling that combines rich custard with a sweet, cinnamony crumble. And the Coconut Custard and Pecan pies at Abu's are just as good. Everything comes in three sizes, if you want to share. 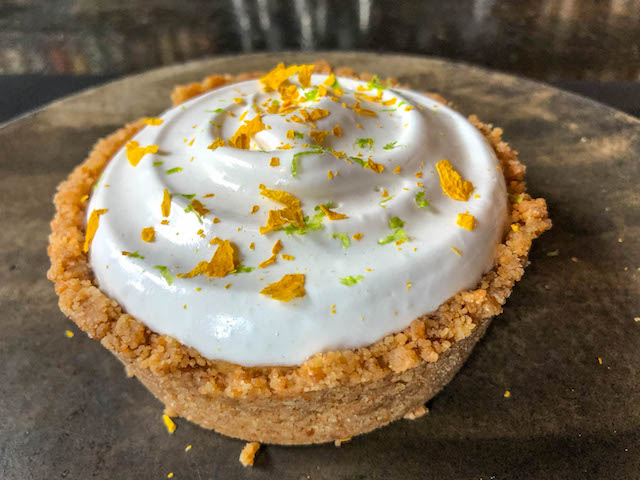 Gramercy Tavern The only time I've ever eaten at this beloved, iconic, extremely expensive restaurant (yes, even the "casual," comfortable Tavern up front is pricey as hell) has been in the middle of the afternoon, at the bar, for dessert. And that's fine! Because even though, with tax and tip (and no booze), a sweet treat will set you back somewhere near $25, pastry chef Miro Uskokovic's magical creations are well worth the splurge. Especially the Lime Meringue Pie, which sets the bar very high indeed for zesty, sticky, crumbly delights. 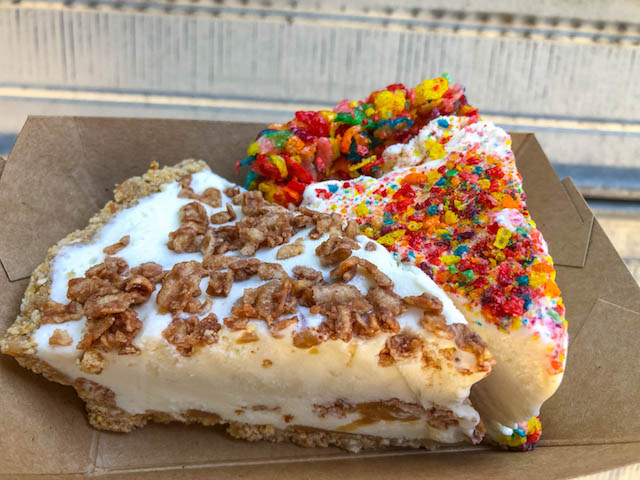 Ice and Vice It stands to reason that the city's best ice cream makers would also excel at ice cream pie, and the wizards at Ice & Vice do not disappoint. Now with three locations—the flagship on East Broadway, the kiosk in Times Square, the pop-up in Long Island City for at least the rest of the summer—Ice & Vice slings several different pie slices, including the OG Detention (which is a slab of Malted Vanilla ice cream with a Fruity Pebble crust) and the newer Pie Felicia, featuring peanut butter swirl ice cream topped with Nutella-covered potato chips in a pretzel crust. Be an Instagram hero and get a slice on a multi-scoop cone!

Locations on the LES, in LIC, and in Times Square (iceandvice.com) 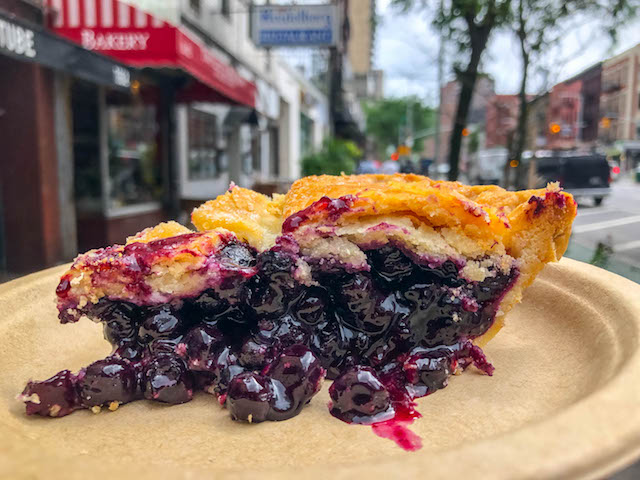 Two Little Red Hens The origin story here is a bit convoluted (this Yorkville birthday cake institution was once an offshoot of what is now called Ladybird in Park Slope), but the most important thing to know for our purposes is that Two Little Red Hens bakes some incredible pies. Grab a seat in the homey, slightly hectic space and devour a slice or two from among the half dozen or so selections available daily, or order ahead and eat a whole pie in the comfort of your bed (or wherever). Last week the Blueberry, seen above, was exceptional. 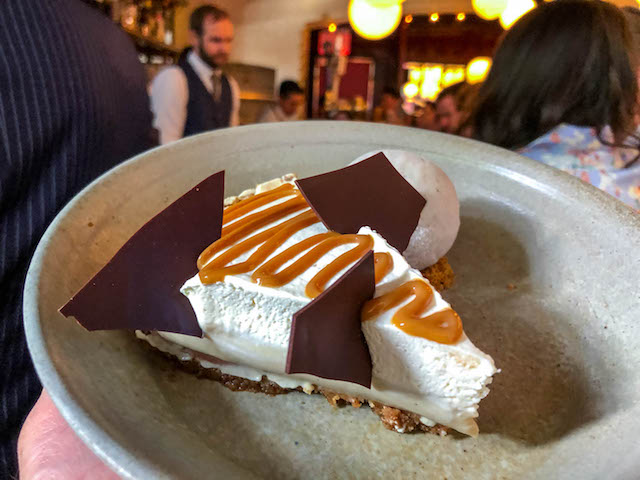 The Dutch Though the scene at this still-trendy SoHo spot is a little much for me, Andrew Carmellini's food at The Dutch almost always succeeds in making me happy. There's usually a pie or three on the dessert menu, but get the Banoffee one above, served with banana sherbet, if it's there while you are: it's a marvel of varying textures and flavors across the sweet treat spectrum. A seat by the window overlooking the Prince Street parade is the way to go. 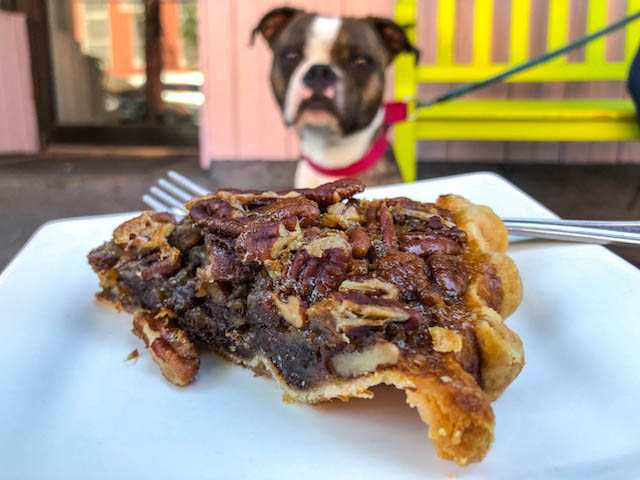 Pie Corps This cute little cafe in Greenpoint is mostly made up of kitchen, but McGolrick Park across the street or the benches on the "front porch" make for perfectly pleasant places to snack on a slice of Cheryl Perry and Felipa Lopez's creations, perhaps with a cup of coffee. Pie Corps is solid up and down the menu, especially if you ignore the gimmicky, overly-crusty Pie Pops; my usual, however, is whatever beauty they have in the chocolate/pecan family.

#best of
#best of gothamist
#best pie nyc
#pie
#pies
#original
Do you know the scoop? Comment below or Send us a Tip