A few years ago Gothamist spent weeks gorging on all manner of slices and pies to compile an exhaustive list of the best pizza in NYC. That compilation is still 100% valid and, thankfully, none of the spots we loved back then have closed. However, new places never stop opening in this town, and while most can't hold a candle to the classics, a select few are firing up extraordinary, destination-worthy pizza. Here are the best new spots—or, at least, new since our last list—that no self-respecting pizza fan (and, hence, no self-respecting New Yorker) should miss. 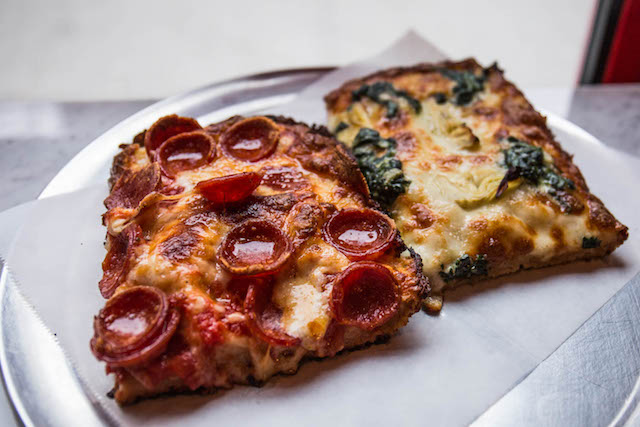 Upper West Side pizza institution Mama's has been ably serving its immediate neighbors for nearly 50 years, but this small, homey spin-off on Broadway really elevates the family's game. The cause for excitement here is Frank Tuttolomondo's amazing focaccia slices, which are wonderfully crusty, cheesy, and chewy. And each of the many varieties on hand comes loaded up with high-quality toppings, both traditional and just a little bit fancy, all for $4.50 each. The small, comfortable Mama's Too has only been open a few months, and it's instantly one one of my absolute favorite slice spots, new or established, anywhere in the city. 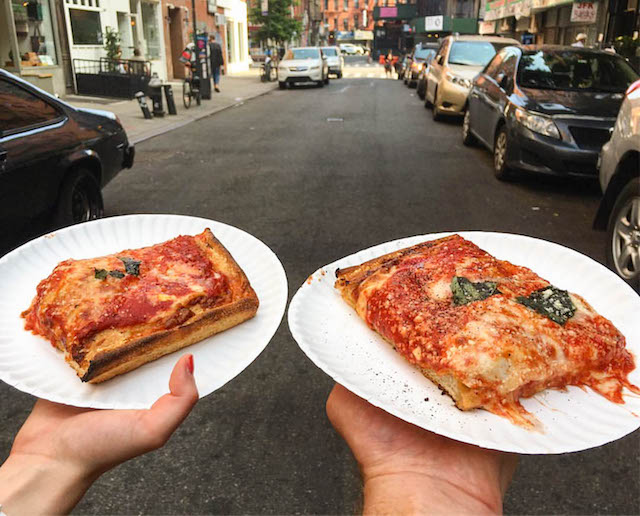 Washington Heights native Scarr Pimentel opened this throwback-looking slice joint in 2016, to critical acclaim and instant skater cred, and he hasn't been caught slipping since. All of your "100% all-natural" options here are first rate—the classic New York fold, the fat, chewy Sicilian—but if you have 20 minutes to hang out in one of the backroom booths listening to well-curated hip hop, get one of Pimentel's gooey, wonderfully decadent personal pan pies ($16, with pepperoni), which can easily feed two. 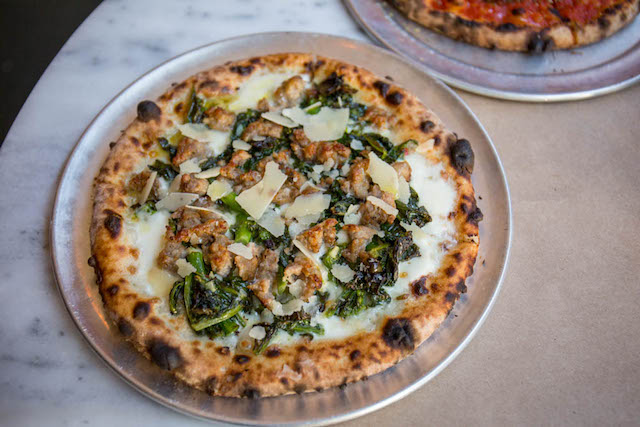 Sitting in the permanent shadows of the elevated along the border of Bushwick and Bed-Stuy, Santa Panza might be easy to overlook whilst scurrying to the J/M/Z, but this trattoria is so effortlessly charming once inside, and is serving such good food right now, that it's worth making a special trip or three for, just to try everything. Much of the eating excitement here is found in the pizza part of the menu, where chewy, exceptionally vivid Neapolitan-style pies come in two handy sizes (the six-inchers are all under ten bucks) that are easy to share and certain to make you happy. 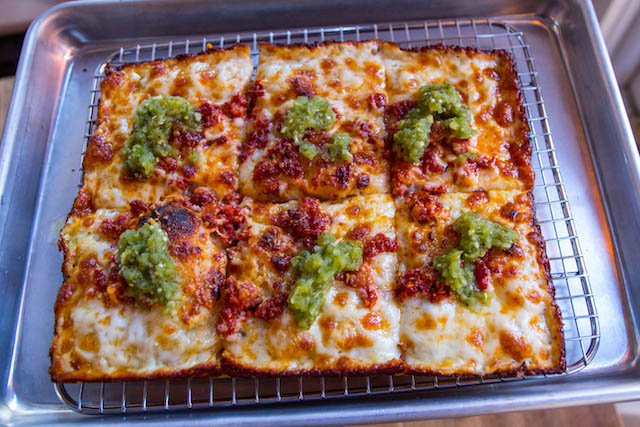 The original Emily in Clinton Hill has been around since 2014, and the pizza there remains first rate. For me, however, it's the amazing square pies at both Emmy Squared (opened in 2016) and Emily West Village (2017) that have made Emily and Matt Hyland true NYC pizza royalty. The topping-combos are thoughtful, inventive and balanced; the delightfully dense dough and various sauces all made with care and skill; the whole package filled with love. And the always-affable Hylands have two more spots coming soon to East Village! We are fortunate to have them in our city.

Located at 364 Grand Street in Williamsburg, and 35 Downing Street in the West Village (emmysquared.com; pizzalovesemily.com) 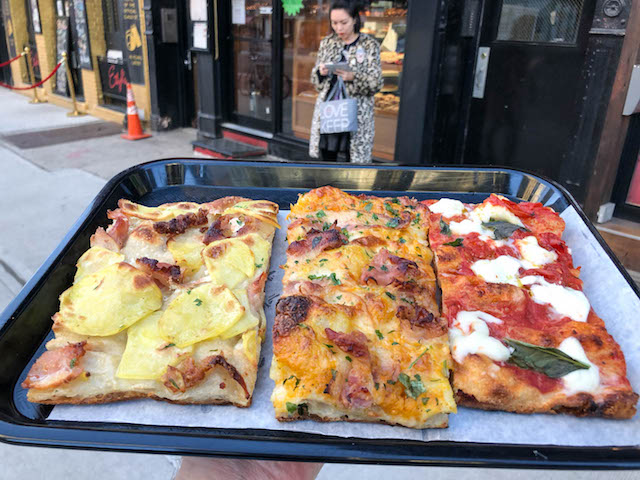 Roman pizza legend Angelo Iezzi brings his airy squares to the Upper East Side with this blessedly unfancy slice spot, Pizza Quadrata Romana, or PQR. On an opening-week visit Iezzi had almost a dozen different varieties on hand for a quick reheat—eat them on the go, or grab a table in the unadorned back room—priced between $4.50 and $8, depending on toppings. The best one we tried was the simple Buffalo Mozzarella, with sweet, creamy cheese and cherry tomatoes that hinted at summer. But it's the delicious, craggy crust for which Iezzi is most famous, made from dough that requires 96 hours of fermentation and is celebrated for its "high digestibility." 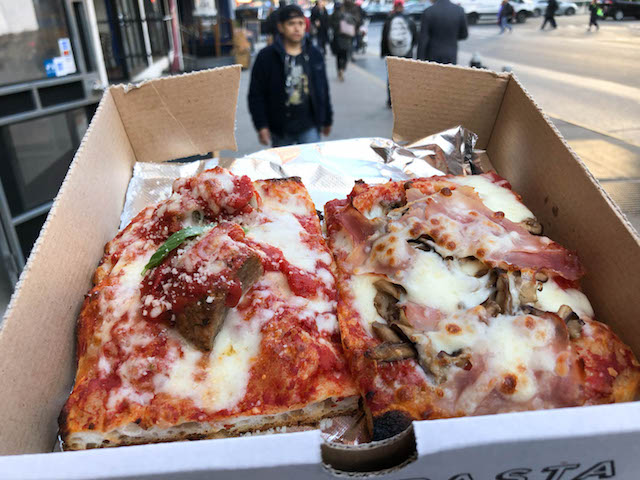 Opening to far less hype last fall in Midtown and early this year on East 14th, Mani In Pasta is another new Roman pizza place that may actually be better than the aforementioned and much-blogged-about PQR. Seriously, the slices here are superb, with a crust almost as light as Iezzi's and an impressive variety of high-quality toppings; the Meatball is excellent (and somehow only $3.25), as is the Ham and Mushroom (also only $3.25). And because each slice is made to order at the 14th Street shop, which is really a sit-down, full-pie restaurant that also sells stuff to-go, everything tastes exceptionally fresh. 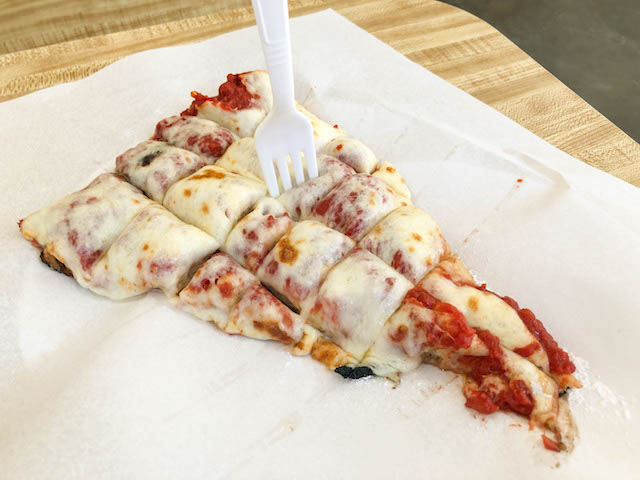 Leave it to the Artichoke guys to give us the best new drunk-slice in town, the eponymous Ragu at their new, no-frills Williamsburg parlor. The genius of the $3.50 Ragu as is multi-faceted: there's the soft, thick, doughy crust; there's the insane amount of melted, gooey mozzarella overflowing the sides; there's the light dusting of powdered sugar your counterperson tosses on the wax paper before plopping the slice on top. Just fantastic. Served sliced up into bite sized-chunks, a plastic fork (which you'll need) plunged into the center. Note: the gang is also opening a Detroit-style spot in Chelsea sometime this year. 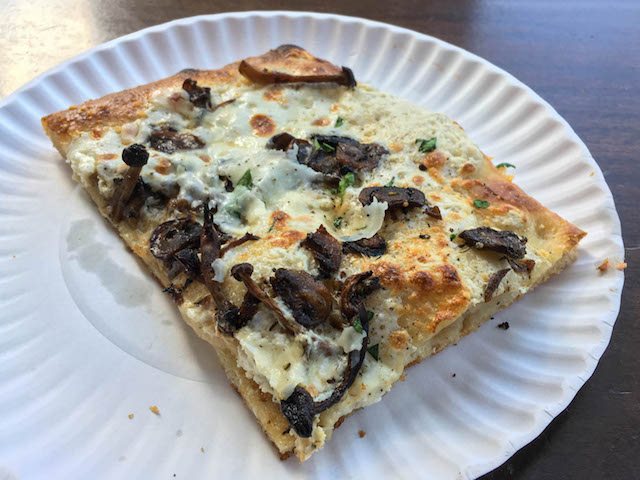 Ivan Orkin will always be most food-famous as the Jewish kid from Long Island who became a Japanese ramen master, but amazingly enough his (and chef Michael Bergmann's) pizza is nearly as good as his noodles. Corner Slice anchors the north end of Gotham West Market, the food hall in Hell's Kitchen way the hell over by the USS Intrepid. As with many of today's best square slices, the crust does much of the work here—it's basically like eating really great warm bread with melty things on top; not for nothing does Bergmann call the place a "bakery"—but plenty of love goes into the sauces and toppings as well. Always totally worth the trip. Pies run from $22 to $32; slices are around $4. 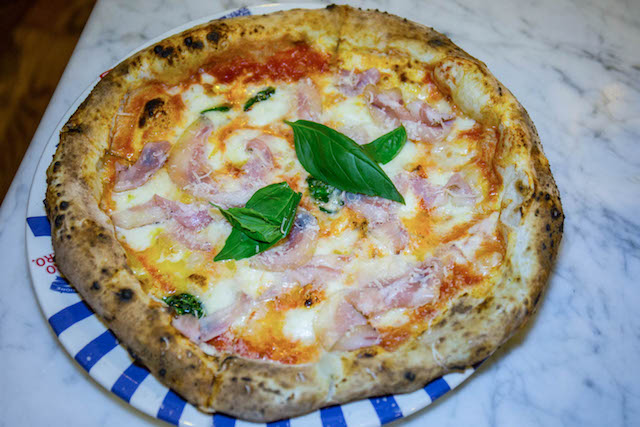 Naples superstar Gino Sorbillo gave us a tease last spring with his "pizza fritta" joint on Mulberry Street (which has since closed), but it took the opening of the mothership on Bowery in November for us to really appreciate how delicious his floppy Neapolitan pies can be. The crust is soft and salty, the toppings full-flavored and layered with abandon, the whole eating experience deeply satisfying. Most pies hover around the $20 mark, but you will be plenty full after wolfing one of these beauties down. 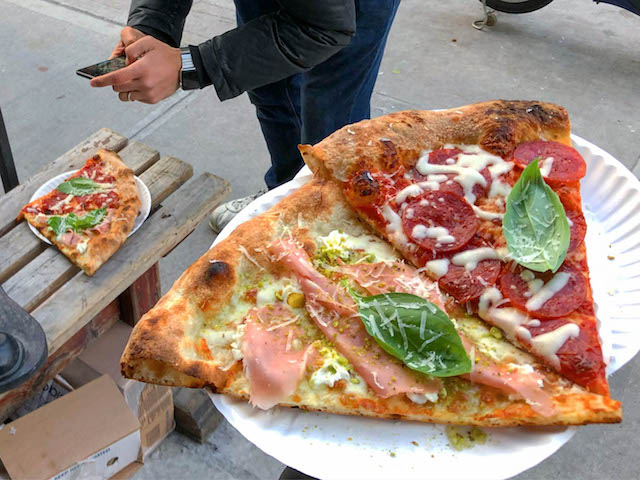 Tiny, cramped, and adorned with a jumble of random tchotchkes, L'Industrie feels like a longtime neighborhood favorite, even though it's only been open since 2015. At first glance the pizza seems old-school, too, mostly sold in big round pies or classic triangle folds. This is all good news, and fits right in with this part of South Williamsburg. Even better: the pizza itself is straight-up phenomenal, the ovens manned by Florence native Massimo Laveglia, who handles both the crowd pleasers (Sausage and Pepperoni) and the fancy stuff (Fig and Goat Cheese) with aplomb. Slices are around $5 each, and if I lived up the block I'd eat here two, three times a week. 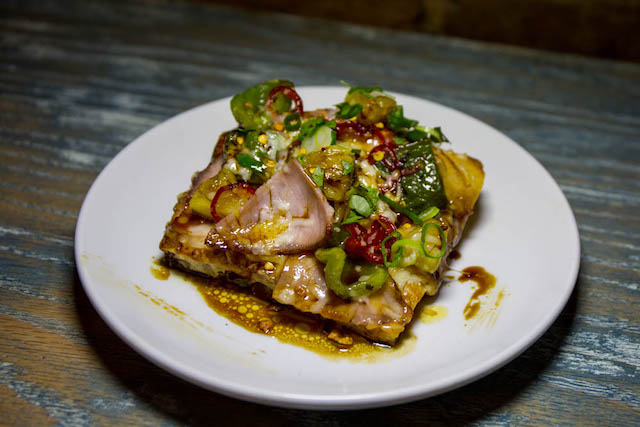 It took awhile for TJ Lynch and Richard Knapp of Mother's Ruin renown to get the pizza perfected at this low-key-cool Alphabet City bar (Con Ed wouldn't give them gas, so they had to pivot to electric ovens), but they sure did nail it in the end. These fat, $5 rectangular slices are ridiculously laden with all sorts of crazy combinations of toppings (there's an excellent homage to the Big Mac, for example, and the pepperoni is slathered with ranch dressing), to the point where you actually have to use a knife and fork. They're so good, though, that it's worth the humiliation. 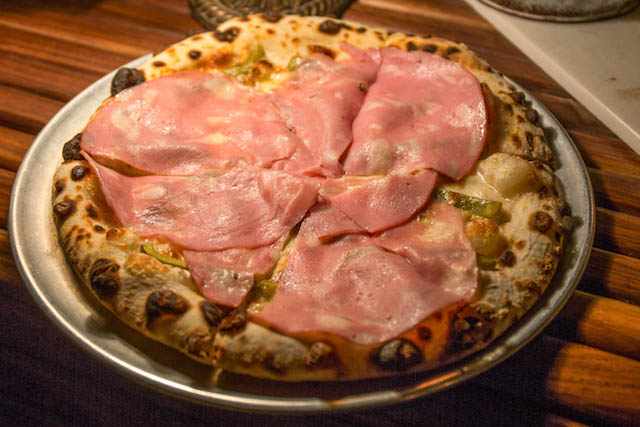 A pizza restaurant for grown ups in Bushwick (it also specializes in natural wine and complicated cocktails), Ops has become quite the happening neighborhood spot since we first went in 2016. And with good reason! The scene is friendly and fun, the space comfortable, and these terrific pies—whether square ($24) or round (about $18)—are made from a slightly tangy sourdough. 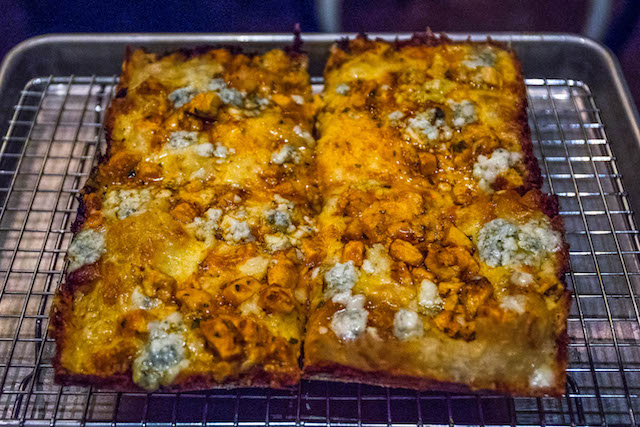 As should be obvious by now, square pizza, whether Sicilian, Roman, Detroit, Grandma, or some variation thereof, is smoking hot in this city. And so here's another one! Massoni is Dale Talde's "inauthentic Italian" restaurant inside a boutique hotel in Koreatown, and though the menu has things on it besides pizza, I've never be able to pull myself away from these fantastic pan pies. Even the more inventive-sounding ones (like the Porchetta with Pesto and Buttermilk Poppy Seed Dressing) work beautifully with the thick, cheesy crust.