"Noodles are a dish best served cold" is... not really a thing. Great noodles are great no matter what their temperature! But given that it's been extremely hot and humid out there this summer, here's a handy list of the best places in town to eat cold noodles of all sorts—buckwheat, rice, egg, green tea, wheat, etc—prepared with both skill and chill.

Important caveat: These are year-round cold noodle dishes. Not included in this list are the many delicious special cold noodle dishes that restaurants (among them Little Tong, Ramen Shack, and Ivan Ramen) break out for a couple of months each summer and then stow away until next year. 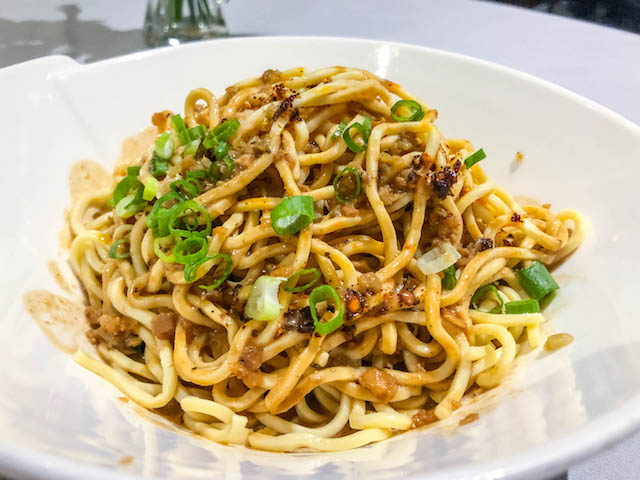 Hwa Yuan: There's a long history to this year-old "luxury" Szechuan palace in Chinatown—basically, it's a reboot, by the grandson, of Shorty Tang's legendary restaurant, at which old-timers claim you could get the best Cold Sesame Noodles in NYC history. But for our purposes all you really need to know is that this bowl of slick, slightly sweet, slightly spicy noodles remains a masterpiece of the form. Bonus: old-school gruff-but-lovable service and very good other dishes, too. 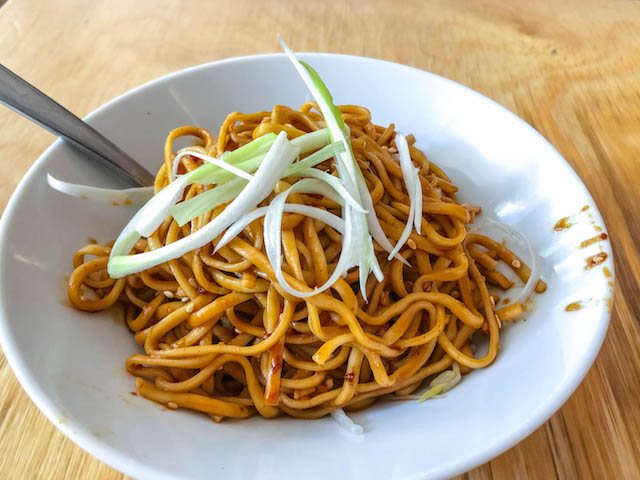 Birds of a Feather: This stylish, prime-Williamsburg Sichuan restaurant opened to some acclaim in the spring of 2017, and a recent re-visit proved that kitchen can still crank out the winning dishes. Like this terrific bowl of Sichuan Cold Noodles, for example, which were both the hottest (in terms of spiciness) and coolest (as in, temperature) of any version I ate these past few weeks. Excellent balance among the chili oil, numbing peppercorns, peanut paste and sesame. 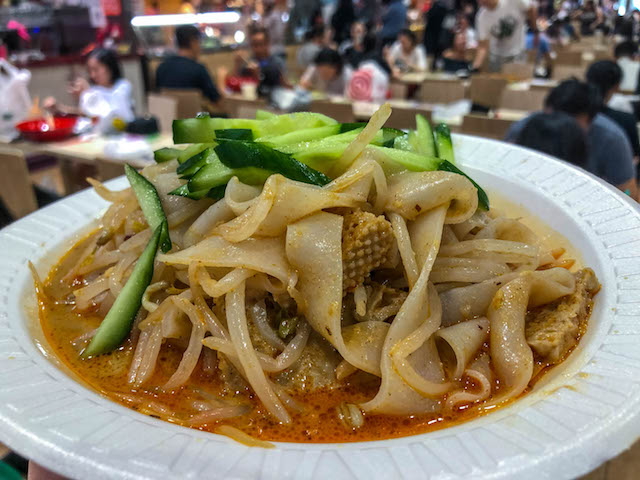 Liang Pi Wang: You could spend a year trying all the noodles in all of the tiny shops and food malls in Flushing's Chinatown, but here's a great place to start: the Liang Pi Wang booth within Roosevelt Avenue's sprawling, four-year-old New York Food Court. Everything is first-rate here but the namesake cold skin noodles are truly exceptional, a beautiful plate of chewy, tangy, summertime love. 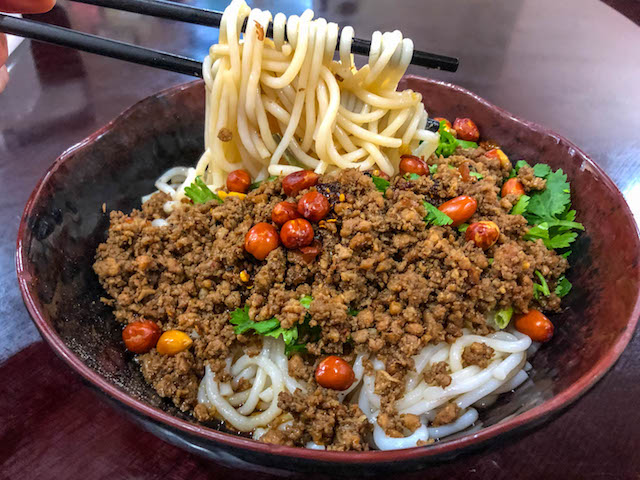 Yun Nan Flavour Garden: Sunset Park locals have been slurping Side Geng's noodles since 2006 (his son Lihen now runs South of the Clouds, part of the rice noodle restaurant explosion in the EV and Greenwich Village these past couple of years), and Geng's no-frills Yun Nan Flavour Garden deserves every bit of acclaim it's received since then. Everything here will make you happy, and the hefty bowl of Cold Rice Noodle, thick with spicy ground meat, crunchy peanuts, and bright sprigs of cilantro, is pure perfection. If you haven't yet made the pilgrimage—it's a good four-avenue hike from the R—I'm not sure what you're waiting for. 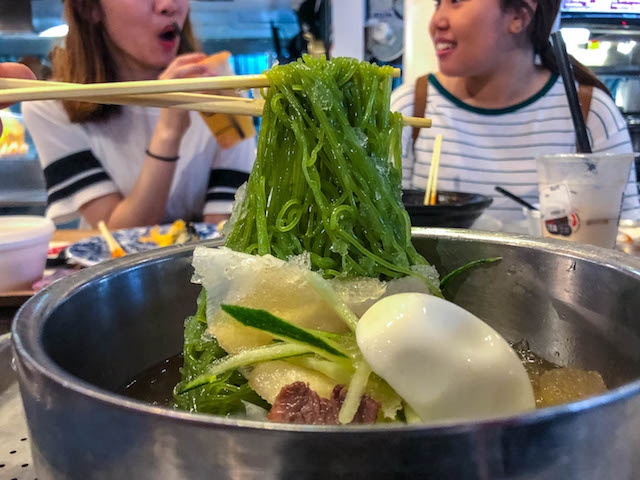 Noona Noodles: One of several good places to grab a bite in Koreatown's bi-level Food Gallery 32 is this new corner noodle shop, set back under the stairs on the first floor. It specializes in North Korean Naengmyeon, thin, chewy noodles served in a cold beef broth as rich and complex as the best tonkatsu with, among other treats, chunks of pear. Noona calls the dish Icy Noodles—there are literal floes of slushy broth in your soup—and the overall effect is one of extreme refreshment on a hot afternoon. 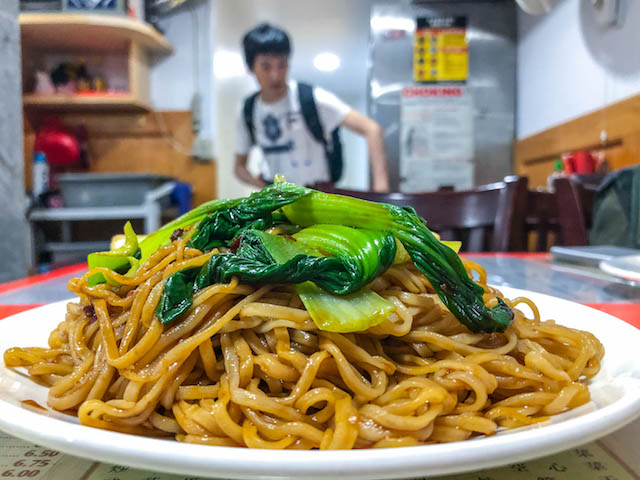 Hong Man: This basement-level Eldridge Street spot was called Sheng Wang for years, before the owners decided to update things last fall with a new name, a slightly new menu (really, it's more "reworded" than different), and new aggressive signage out front. Don't worry though! This cheap Chinatown joint still serves some of the best greasy noodles anywhere, including the cold sesame variety, which sometimes arrive not really that cold, or sesame-y, but are definitely always fantastic. 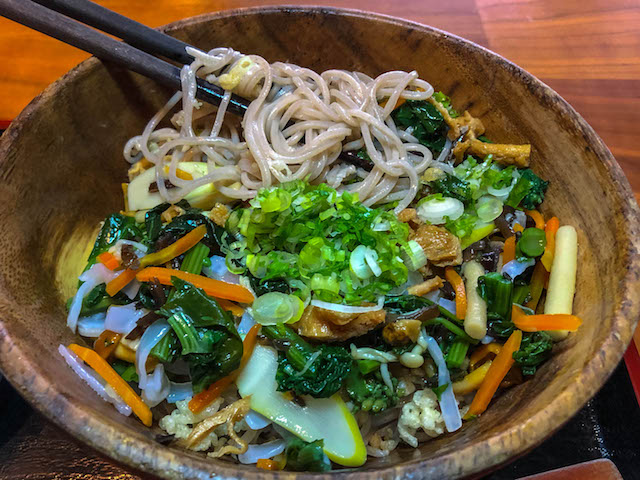 Cocoron: This elegantly designed operation has greatly increased its vegan-friendly footprint along the Delancey/Kenmare corridor in the past few years, with the excellent Goemon curry shop and ambitious shabu shabu omakase restaurant Macaron joining the expanded soba-slinging mothership, Cocoron. Everything I've ever had at the latter has always been delicious and always makes me feel like a better person for having slurped it down, but it's the generous array of loaded-up cold soba bowls, a permanent menu feature, that's especially welcome whenever the weather gets steamy.

Located at 16 Delancey Street between Chrystie Street and Bowery (212-477-1212; cocoronandgoemon.com) 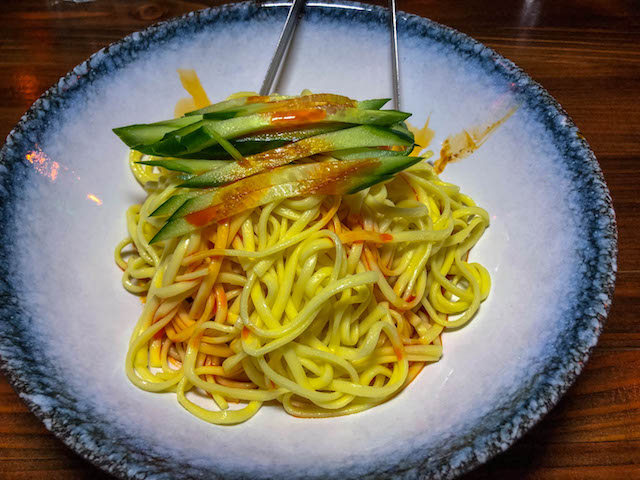 Le Sia: Much respect to this always-lively East Village restaurant, which just opened last winter and is still drawing large crowds nightly, for refusing to offer much of anything for timid or picky eaters. The menu is mostly skewers of offal and messy platters of unshelled crustaceans. But there is at least one dish that feels safe for most everyone, and it also happens to be delicious: the Cold Noodles with Spicy Sauce, the perfectly textured noodles sitting in shallow pool of sauce that's neither too oily nor alarmingly spicy. 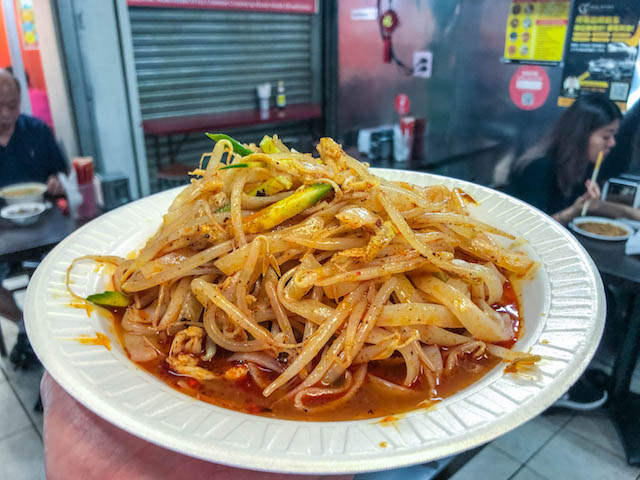 Miss Li: Descend the stairs off Flushing's Main Street into the Golden Shopping Mall, then keep walking down the cramped, subterranean hallway past an array of food booths, and all the way in the back, among broken beverage display cases, you'll find Miss Li and her first-rate noodles. The glutenous Handmade Cold Noodles are of the Henan, doused-in-chili-oil variety, cucumbers and bean sprout adding a bit of crunch, and they are guaranteed to satisfy that very specific sort of craving. 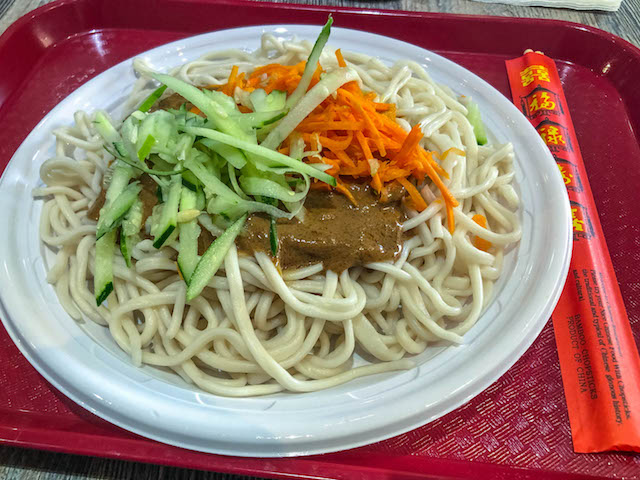 Vanessa's Dumpling House: You might feel a tinge of regret when your plate of Noodle with Mashed Sesame Sauce arrives at this drunk-food staple—"shoulda gotten the fried dumplings" you mutter, slurringly—but don't worry! Once you mix in the ample puddle of brown sauce, and Vanessa's pale noodles glisten with all that sticky, kicky deliciousness, you'll remember that ah, yes, this is exactly what I was in the mood for, thank you. Repeat as necessary for as long as you live in NYC. 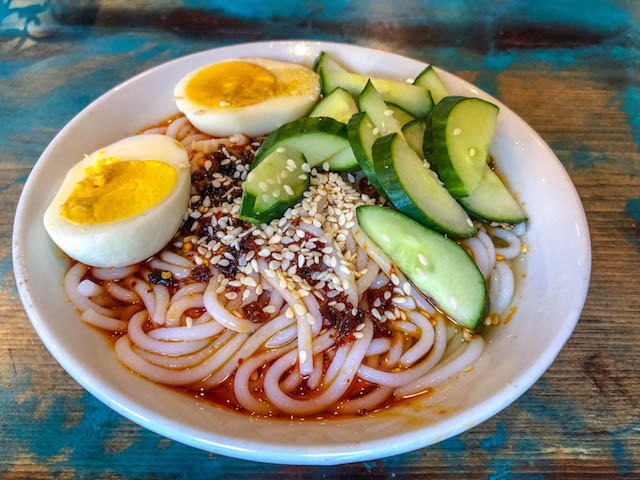 Kopitiam: Their new space on East Broadway is bright, friendly, comfortable, and, compared to the previous hole-in-wall on Canal, enormous. The menu has been greatly expanded, with all sorts of Malaysian snacks and treats, most of which are excellent. And, most relevant to this discussion, Kopitiam's Vegetarian Chilled Spicy Sesame Noodles are fantastic, more chili oil than peanut butter, the thick rice noodles firm and delightfully slippery. This is such a great place. 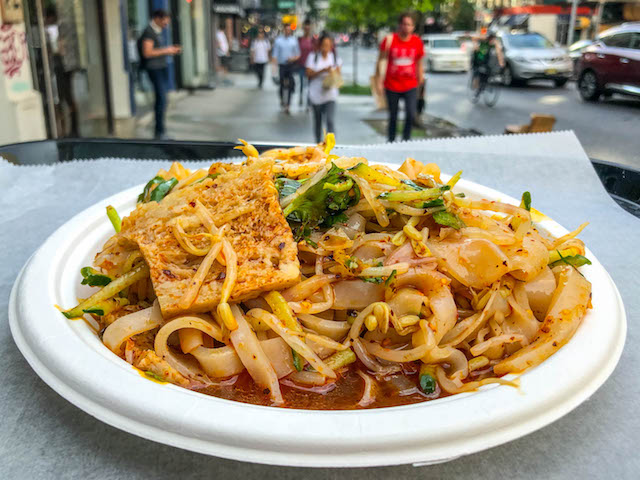 Xi'an Famous: More than a dozen years after the first Xi'an Famous opened in a stall at the Golden Shopping Mall, Jason Wang's no-frills noodle chain has become a NYC institution, with 13 locations across Manhattan, Brooklyn, and Queens. And at every one of them you can get Wang's kick-ass Liang Pi, or Cold Skin Noodles—a lively, complex dish so marvelously textured and balanced that I could eat it two or three times a week and not get bored. 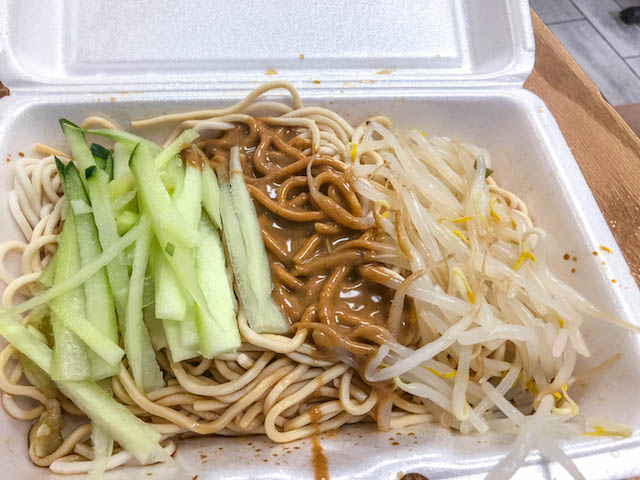 White Bear: This tiny storefront spot is justifiably renowned for its wontons, but if you find yourself hankering for Cold Sesame Noodles the next time you're crammed into one of the six or so seats at Flushing's White Bear, order with full confidence that your thick-and-nutty cravings will be satisfied. One thing though: for whatever reason it's the only menu item not translated into English, nor does it have a number, so if your Mandarin is rusty just point to the box between 18 and 19. 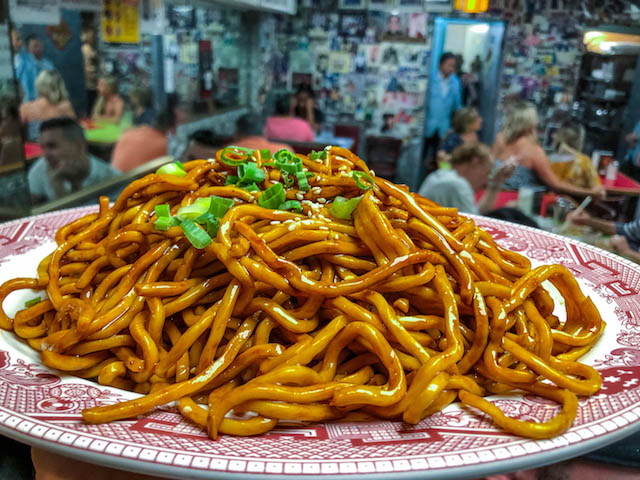 Wo Hop: It's a bit of sentimental pick, maybe—Wo Hop deserves to live forever in its chaotic, subterranean space, so stop in for some Cantonese classics at least once a month—but this Mott Street joint has been feeding locals and tourists alike since 1938, and the kitchen and serving crew still play the host with aplomb. Get the Cold Sesame Noodles, a huge mound of which hits the table seconds after you order it, covered in a thick coat of sauce. For certain downtown NYC nights, there no better place to be.

#best cold noodles
#best of
#best of gothamist
#cold noodles
#original
Do you know the scoop? Comment below or Send us a Tip