This town's got everything from fancy cocktail joints to craft beer havens to wine bars launched by LCD Soundsystem. But there's a certain ineffable appeal to the classic Old Man Bar, a never-changing drinking hole characterized by its creaky stools, time-stained bar, all-American beer offerings, and a clientele that's been fighting over sports games aired on the flickering televisions for decades. Here are our favorites; as always, leave yours in the comments. 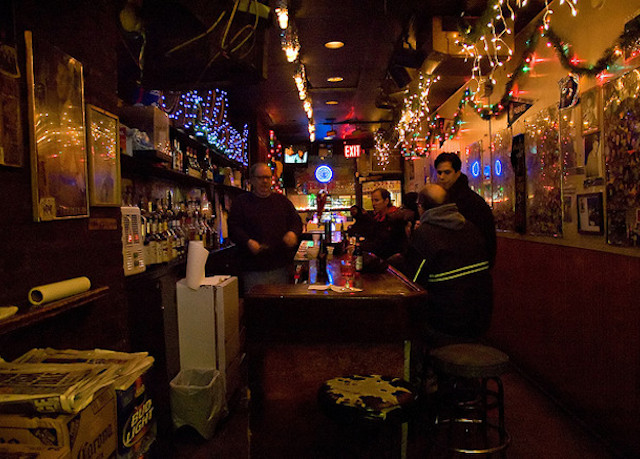 HOLLAND BAR: I once met an army captain who told me that in between Afghanistan War tours, he liked to pick up young ladies at this Hell's Kitchen drunk tank. I like to believe the elder folk that have been frequenting this spot for years feel the same, too. People who drink here go hard, like open-bar-at-your-ex-boyfriend's-wedding hard, but in the mid afternoon on a Tuesday. Beers are $3, potent rail drink poisons are about $5 and the soles of your shoes are guaranteed to stick to the floor for a few seconds longer than seems sanitary. Make new, wasted friends, but don't sit on any of the barstools, lest you pick up a strain of something that doesn't respond to antibiotics. 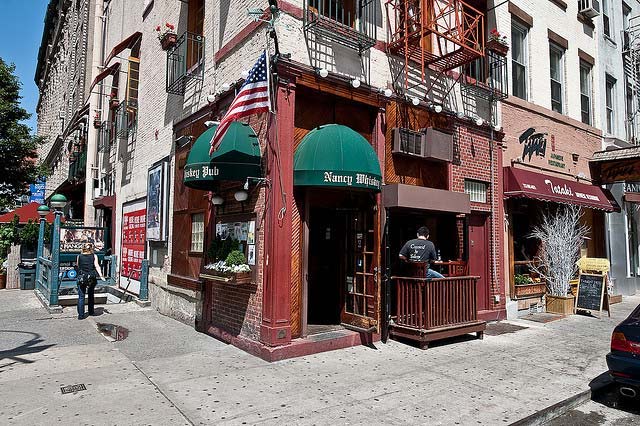 NANCY WHISKEY PUB: Nancy Whiskey's been kicking it in Tribeca since 1967, before the neighborhood even earned that moniker. And it seems like old stalwarts still stop by to booze beneath the bar's Irish flag and Tiffany lamps, dining on cheap burgers and fighting over the jukebox. Bartenders know regulars (though they might snipe at newcomers), happy hour beers clock in below $3, and there's a shuffleboard court. Someone will spill alcohol on your hair here, and you'll wear it like a badge of honor.

Nancy Whiskey Pub is located at 1 Lispenard Street between Broadway and 6th Avenue in Tribeca (212-226-9943, nancywhiskeypub.com). 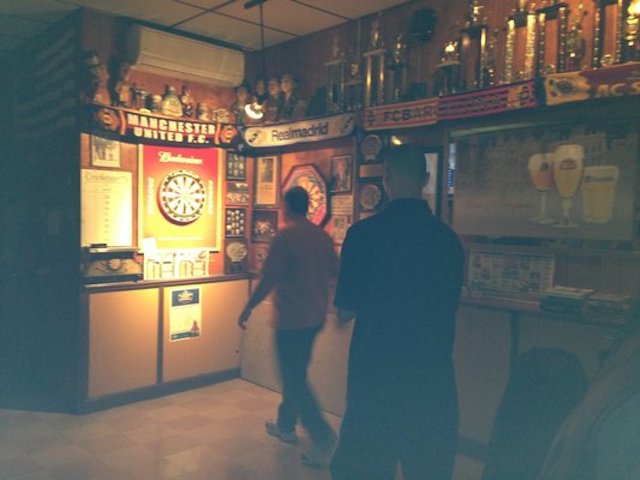 SOCCER TAVERN: Soccer Tavern is one of the last remainders of Sunset Park's Irish past, though the bar menu's since evolved to include Chinese snacks alongside Shepherd's Pie. This pub's got everything: old men, middle-aged men, young-ish men who will one day be old, sports on television, outdoor space, and a very active dart league. Plus, the bar is practically windowless, so you can drink at will without being burdened by the passage of time. 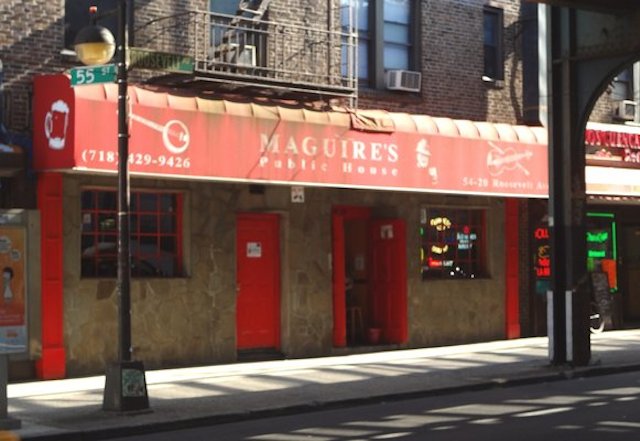 MAGUIRE'S PUBLIC HOUSE: This Woodside pub has been described to me as "the gnarliest Irish bar" where one must "be ready for whatever," even if "whatever" means a liver-killing shot-for-shot contest with a battle-hardened regular. Plus, there's a pool table! That's really all you need to know. Eat before you enter and line up your pre-bed Advils in advance. 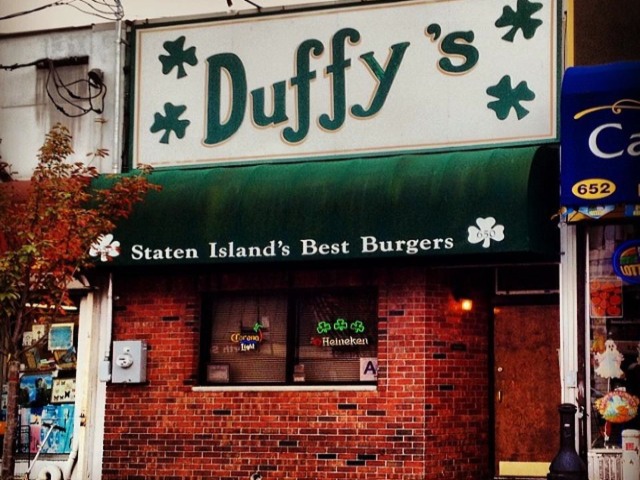 DUFFY'S TAVERN Their superlative pub grub brings in folks of all ages, but take a look at the butts in barstools when the tavern opens in the afternoon and it'll be packed with Levi's-sporting gents of a certain age. It's a First Name Basis kind of place, where daily regulars take their spots, throw down a $20 and drink away the afternoon recalling golf outings and times when quiet afternoons turned into rowdy evenings. It may not be terrifying like some other spots on this list—and yes, it's more family-friendly during evening hours at the tables—but older dudes love a $4.25 bottle of Bud and this is where you'll find 'em. (Nell Casey) 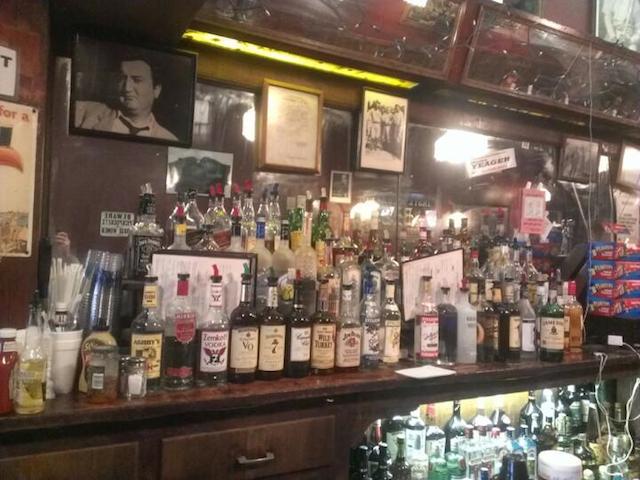 MALACHY'S DONEGAL INN: A bar best described as "the opposite of trendy," Malachy's has maintained its old-world, crusty customer bar feel, sticking with its 72nd Street space even while stalwarts like P.D. O'Hurley's and The Emerald Inn have been forced to relocate. Customers and bartenders here are salty as hell, if that's what you're looking for—one Yelper described it as, "More 'angry senior citizen center' than 'dive bar,'" just to give you a taste. Drink beer and dine on wings for cheap, though don't expect any fancy cocktails or fine wines here. 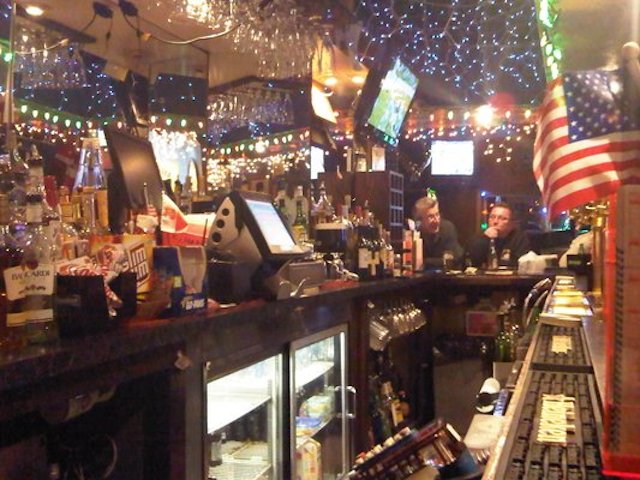 PIT STOP BAR: A favorite among Greenpoint's older, occasionally meaner crowd, Pit Stop Bar is the place to be if you like football, strong drinks and scary-as-hell bathrooms. Pints tend to run under $5, there's a jukebox with oldies and a dart board, and there are TVs blaring whatever sports game-type thing happens to be dominating the airwaves that night. More importantly, Pit Stop opens at 11 a.m. on weekdays and at noon on the weekends, so you can get your drink on with the old folk from the minute you wake up until your head crashes down on the decidedly non-bespoke bar. 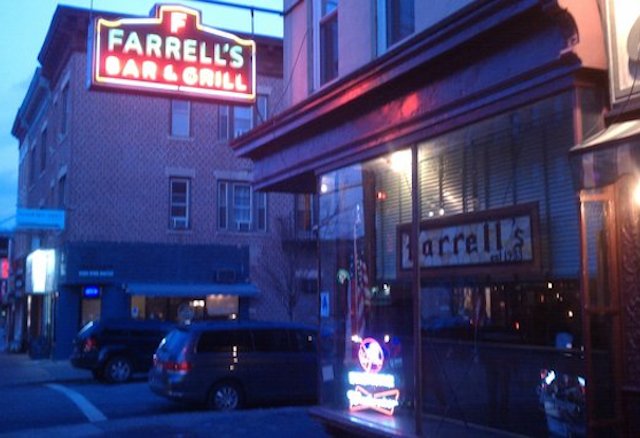 FARRELL'S: This Windsor Place drinking hole is the atmospheric opposite of the Double Windsor across the street, boasting a blue collar cop/firefighter clientele that would happily chase you out if you asked for a bespoke cocktail or craft beer. Ladies, take note: Farrell's didn't even serve solo women until the 1970s (thanks, Shirley MacLaine!), though now they'll probably let you imbibe their signature Styrofoam Big Buds thanks to those pesky discrimination laws.

DENNY'S STEAK PUB: Sure, the neighborhood folks this spot draws are a bit curmudgeonly, and sure it’s not the most glamorous of watering holes, but this old-man establishment is worth the end-of-the-line, outer-borough train ride—on the G, no less. Noisy, extremely cheap and a great place to pick up an off-duty uniform (wink wink), Denny's perfect for those of you sick of the pretentious, pseudo-”dives” that seem to demarcate every corner of the borough. Come for the dadbods, stay for the disarmingly cheap drafts, though note there's no steak (or food) to be had here. (Sandra Song) 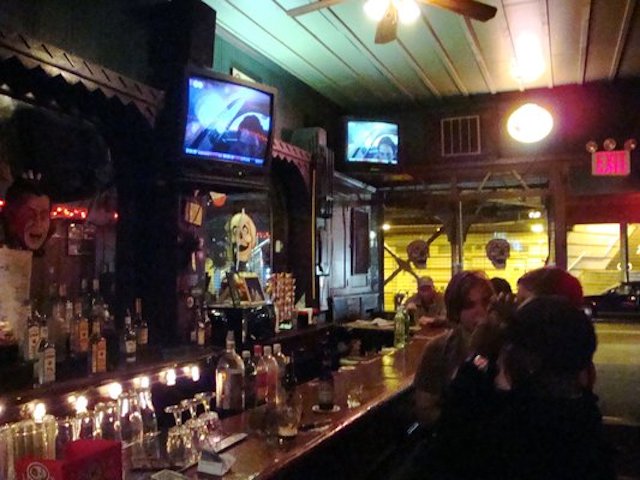 STATION CAFE: A Yelper kicked off his review of this Woodside bar by proclaiming, "We came in here on a dare." That about sums it up. Station Cafe is one beautiful, terrifying drinking hellhole complete with the usual jukebox, pool table, scary clientele and sparkly light things that morph into moving monsters when you get good and drunk. It's located right by an LIRR station, drawing in crowds of local old Irish men and baby-faced Long Island lads alike.

Bottled beers are cheap, rail liquor is cheap and fancy pants cocktails and draft brews are non-existent. The bathroom is a piquant horror show, and there's an 86.3 percent chance at least two fights will break out while you're there. Oh, and it made a cameo in an episode of Entourage way back when. This bar is amazing. 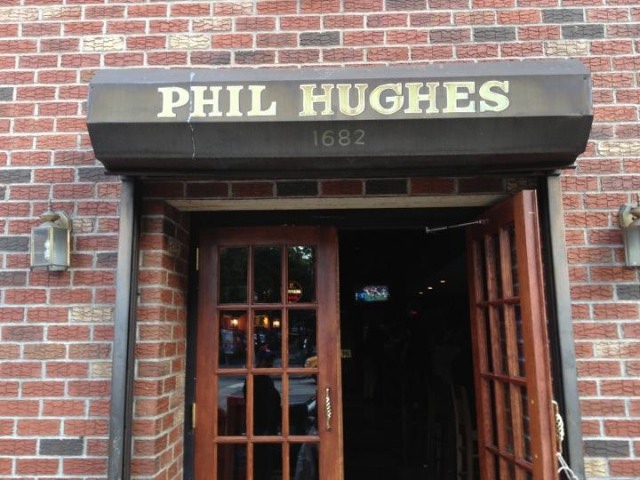 PHIL HUGHES BAR: Speaking frankly, there's something just a little bit sad about this longtime UES bar, whose patrons are well on the other side of functioning alcoholic. But that's what gives an Old Man Bar its flavor, so here we are. The bare bones setup includes cheap drinks, a pool table and one of those newfangled internet jukeboxes that probably pisses of longtime regulars who'd rather hear Frank Sinatra than Fleet Foxes. Sometimes they have live music, though, and let me tell you: those duffers can really cut a rug. (Nell Casey) 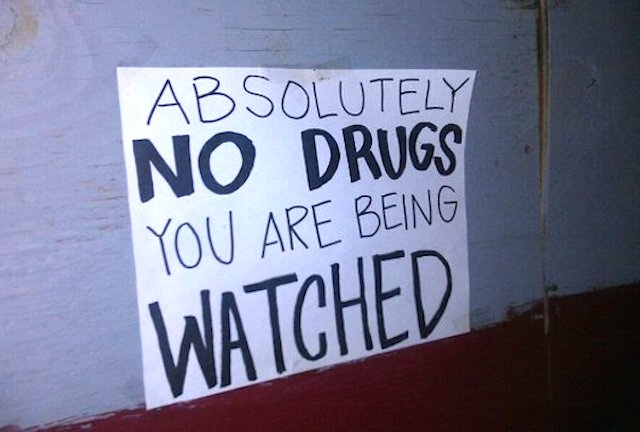 TIP TOP BAR & GRILL: It may have random junk lying around and an assortment of fold-out chairs, but for decades Tip Top has served the good people of Bed-Stuy $5 beers, paired with surprisingly clean surfaces and a well-curated jukebox that’s always spinning soul and classic Destiny’s Child. There’s also a backyard and a little space to shimmy in the back, so bring some singles shake it like a Salt(-n-Pepa) shaker. (Sandra Song)

Tip Top is located at 432 Franklin Avenue between Madison and Monroe Streets in Bedford Stuyvesant, Brooklyn (718-857-9744).