Ice cream, without question, is the world's greatest food. About 20 years ago I got into the habit of eating at least one serving of this magical frozen dessert every single day, and I've never been sick and always been happy. For this assignment I upped my daily intake considerably, revisiting my favorite spots, trying out a couple that were new-to-me, and so on. Most importantly, for inclusion on this list an ice cream purveyor had to consistently produce delicious treats featuring all sorts of flavors beyond the basic vanilla and chocolate. Here then, in no particular order, are the definitive best ice cream parlors and stands in NYC, and I'd like to take a moment to thank them all for making the world a better place. 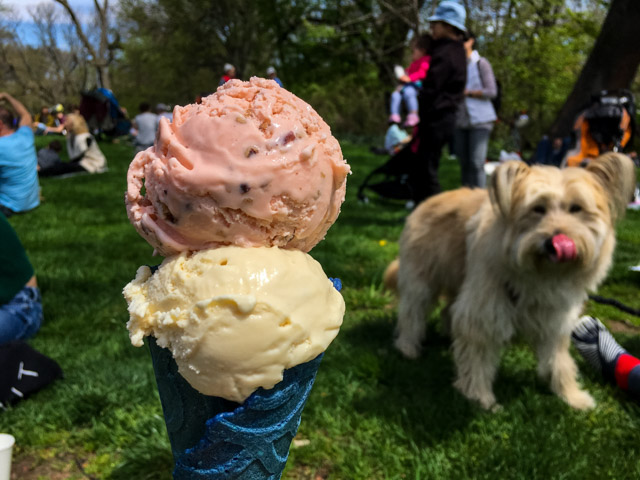 MALAI: Started by the enormously talented Pooja Bavishi a couple of years ago (and, fingers crossed, maybe finally getting an actual storefront soon!), this Smorgasburg staple never fails to blow me away. You can usually find about six different varieties at her Malai stand, all of which—yes, even the more delicate-sounding ones like Palm Sugar and Star Anise—are full-on delicious. They feature not only bold, clean flavors, but a deeply satisfying, ultra-rich texture. This is full-on creamy perfection, made with a whole lot of love.

Malai can be found at the Willamsburg and Prospect Park Smorgasburgs every weekend (malai.co) 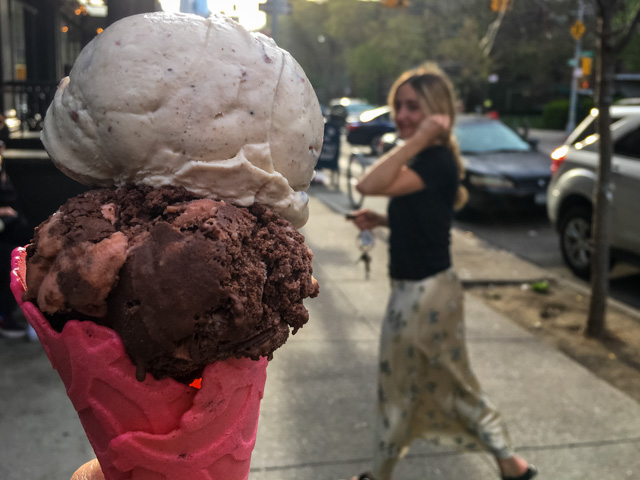 Ants On a Farm and Blood Sisters ($6.50), at Ice and Vice. (Photo by Scott Lynch/Gothamist)

ICE AND VICE: The rest of the world is finally getting wise to what we've been saying for a couple of years: Ice and Vice makes flat-out spectacular ice cream. Yet even now as the accolades roll in, the semi-remoteness of their parlor on Clinton and East Broadway ensures that you never have to wait too long for your double scoop cone or crazy-ass sundae. And don't be scared of the more experimental flavors! Tea Dance (Nilgiri Tea Leaf, Lemon Charcoal, Salted Caramel) and On the Rocks (Persian Black Lime Cola, Cherry Poprock) are just as crowd-pleasing as gateway flavors like Milk Money and Basic B, the latter of which is the best vanilla you will ever eat.

Ice and Vice is located at 221 East Broadway near Clinton Street, with a soft-serve kiosk in Times Square coming soon! (iceandvice.com) 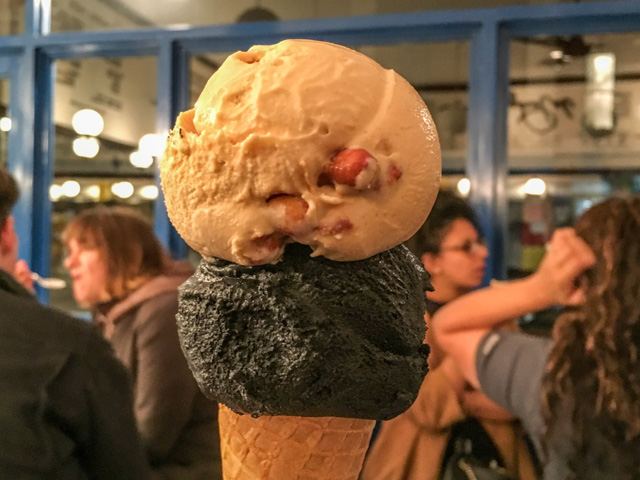 MORGANSTERN'S: This Rivington Street parlor can be annoyingly crowded during high summer, but that doesn't mean the ice cream isn't worth the wait. Better yet: go on a weekday afternoon, or anytime that it's even a little chilly. Like all the best spots, Morgenstern's does everything well, including all five of their vanillas (though the Burnt Honey is the best), all five of the chocolates (Rockiest Road is ace), and their rotating specials like the mysteriously dark Black Coconut Ash. Or do what my daughters and I do on special occasions and leave the decision-making to your scooper with the amazing, five-flavored King Kong Banana Split.

Morganstern's is located at 2 Rivington Street between Bowery and Chrystie (morgensternsnyc.com) 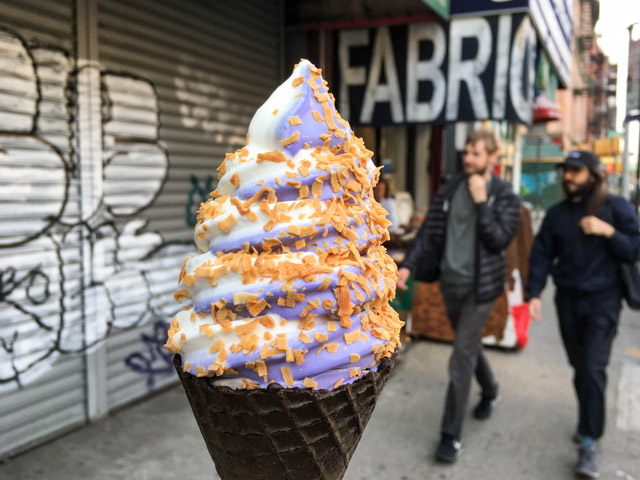 SOFT SWERVE: A ton of gimmicky new spots have opened around town these past few years, most of which make ice cream that's more fun to look at than to actually eat. Not so at Chinatown newcomer Soft Swerve! Yes, these pretty creations will provoke plenty of likes on your Instagram, but damn if they don't taste fantastic as well. The Ube, the Coconut, the Black Sesame, and the Matcha are all first rate, with a depth of flavor not usually found at such places. The toppings, too, are thoughtfully selected, adding both texture and a little extra zip to the presentation. This one's a keeper.

Soft Swerve is located at 85B Allen Street between Broome and Grand (softswervenyc.com) 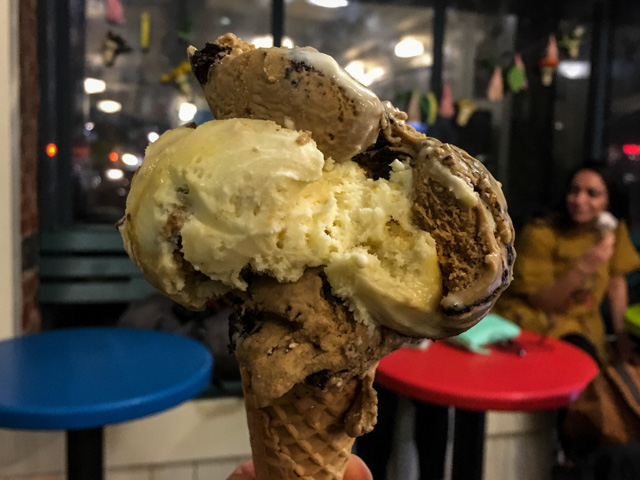 Cookie au Lait and The Commodore ($6.95), at Ample Hills. (Photo by Scott Lynch/Gothamist)

AMPLE HILLS: Ample Hills has been around for a half dozen years now, but judging by crowds that regularly run out the door at their Prospect Heights and Gowanus locations, no Brooklynites are even remotely tired of these unabashedly sweet, more-is-more concoctions. Most remarkable about these jam-packed sugarbombs is how balanced the flavors are, thanks in large measure to the homemade mix-ins (if this weren't an ice cream parlor it would make an excellent bakery) and on-site pasteurization, which allows the crew to build, for example, a marshmallow-infused base from scratch. Their success is well-deserved, and likely to continue for as long they want it to.

Ample Hills has fixed locations in Gowanus, Prospect Heights, the Meatpacking District at Bubby's and Hell's Kitchen within Gotham Market, as well as seasonal stands (amplehills.com) 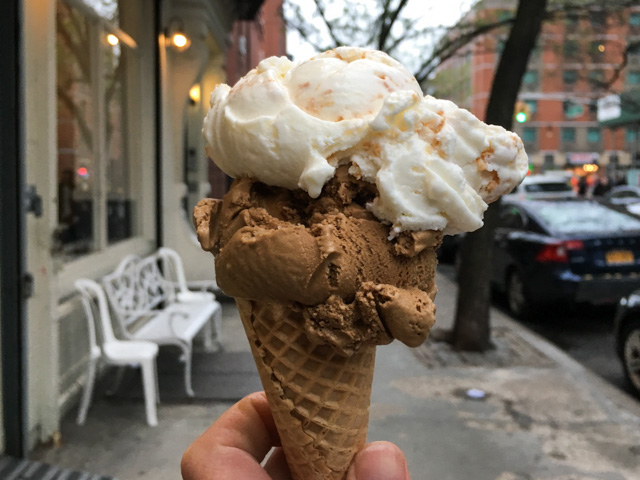 Toasted Coconut and Mocha Chip ($5.97), at Sundaes and Cones. (Photo by Scott Lynch/Gothamist)

SUNDAES AND CONES: This East Village spot was my regular for a stretch there back in the aughts—pineapple with hot fudge was my frequent order—and though so many other excellent independent parlors have opened in the area over the past few years that my attendance here has lagged, recent visits confirm that Sundaes and Cones remains one of the best. The flavors are a big draw, from Lychee to Red Bean to Green Tea. But even the more timid, like Cookie Dough and Red Velvet, are strong. And check out their crazy-looking custom cake ideas as well.

Sundaes and cones is located at 95 East 10th Street, between Third and Fourth Avenues (sundaescones.com) 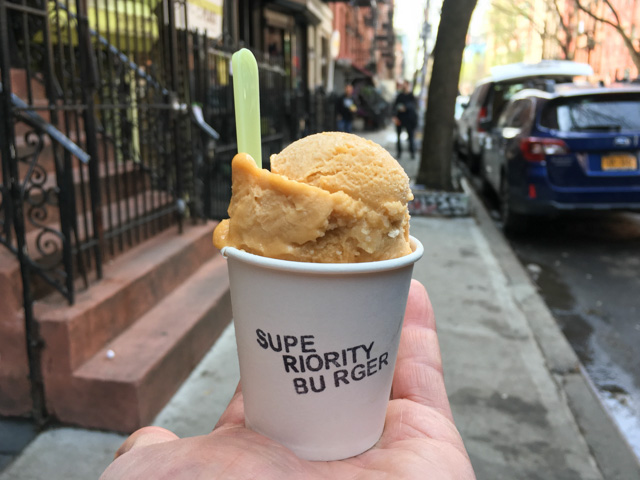 SUPERIORITY BURGER: Every few days or so, the Michelin-starred subterranean joint Superiority Burger offers up two new flavors of its vegan frozen dessert—one a gelato, the other a sorbet, only served together as a double scoop—and no matter what they may be, you should always, always order them. Some sort of labne makes a frequent appearance in the gelato slot, and man does it pack a tangy punch. Apricot Tea was a recent sorbet, and it was remarkable, but no matter what the flavor you're pretty much guaranteed a bright and refreshing treat in this department. Oh and that terrible neighbor who glued pebbles to a nearby seating spot when the place first opened has lost the battle, the public bench is again stone-free, so feel free to enjoy your treat al fresco.

Superiority Burger is located at 430 East 9th Street between 1st and A (superiorityburger.com) 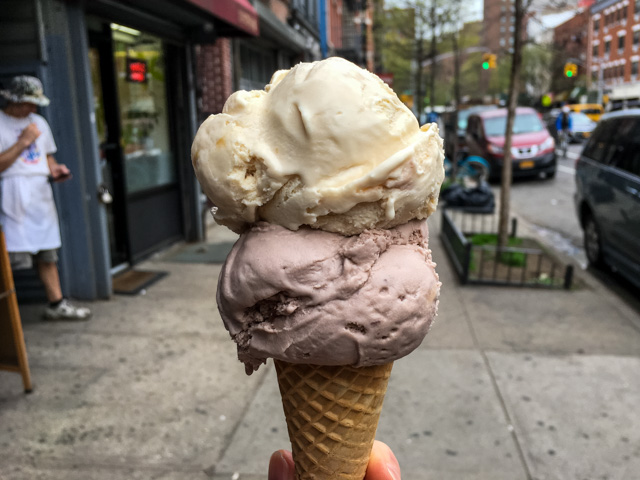 Black Street and Southern Hospitality ($6.75), at Mikey Likes It. (Photo by Scott Lynch/Gothamist)

MIKEY LIKES IT: Mikey Likes It doesn't get nearly enough love. Opened by LES-native Mikey Cole in 2013, and featuring more hip-hop shout-outs and bad puns than all the other ice cream parlors in the city combined, this Avenue A shop scoops up about ten flavors daily, most of which hit me right in my chunky, chocolate-y sweet spot. Mikey and his Leaders of the New Scoop crew are not afraid of piling it on, the ice cream itself is super-smooth, and the monthly specials are always worth your attention. Support local business!

Mikey Likes It is located at 199 Avenue A between 12th and 13th Streets (mikeylikesiticecream.com) 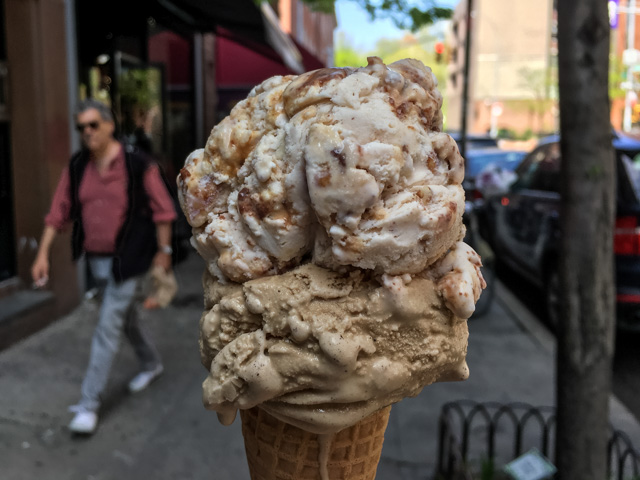 La Newyorkina: Fany Gerson's superb Greenwich Village ice cream parlor, located just a block away from Washington Square Park, is looking better than ever these days, with a colorful new paint job out front and a full selection of her wonderfully rich ice cream (and crunchy homemade toppings) waiting within. Gerson draws upon the flavors of her native Mexico for most of her creations—Horchata, Tres Leches Cake, Coffee and Salted Cajeta, and Spicy Tamarind are some personal favorites, but everything here always makes me happy.

La Newyorkina is located at 240 Sullivan Street between Bleecker and West 3rd (lanewyorkina.com) 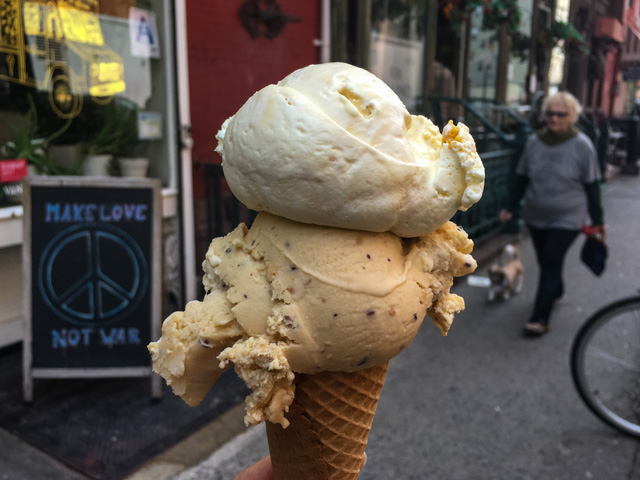 VAN LEEUWEN: I'll admit it, when the Van Leeuwen truck first started showing up on University Place back in the aughts, I was not a fan. Whatever... this place is excellent now, with a nice selection (both vegan and, mostly, non-vegan) of big-tasting flavors across a wide range of sub-categories, including the amazing Honey Comb, which goes well with everything else. One complaint: they are always sold out of the most appealing-sounding special flavors.

There are Van Leeuwen parlors in the East and West Villages, and in Greenpoint, Boerum Hill, and Williamsburg (vanleeuwenicecream.com)

IL LABORATORIO DEL GELATO: One of the oldest parlors on the list and still the best gelato in town, what il laboratorio lacks in ambiance—packs of tourists asking for way too many tastes before making a decision—it more than makes up for with the remarkable intensity that Jon Snyder and crew bring to every scoop. Every flavor here, and there are always around 50 from which to choose, tastes exactly as it should, and explosively so, whether it's something unusual like Pink Peppercorn or Butternut Squash, or more traditional such as Toasted Almond, Banana Chocolate Chip, or Salted Caramel. Nifty rectangular boat-cups too.

il laboratorio del gelato is located at 188 Ludlow Street, on the corner of East Houston (laboratoriodelgelato.com) 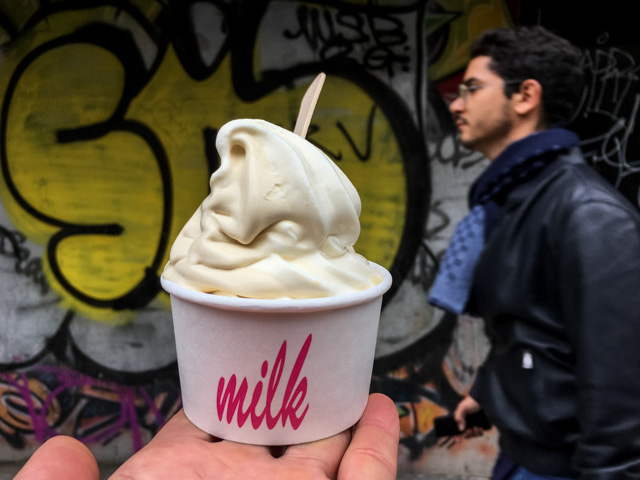 Milk Bar: Some of her treats may have suffered a bit as Christina Tosi turned her backroom-bakery-at-Saam operation into a vast international empire... but not her signature soft serve! Tosi's fiendishly simple Cereal Milk is as magically evocative and delicious as ever, and newer flavors like Crack Pie and Birthday Cake also brilliantly capture the essence of their baked-good counterparts. There are nine Milk Bars now in Manhattan and Brooklyn, but don't let their ubiquity (and crowds of tourists) deter you from Tosi's satisfying frozen delights.

There are Milk Bars in the East and West Villages, Nolita, FiDi, Chelsea, the Upper West Side, Midtown, Carroll Gardens, and Williamsburg (milkbarstore.com)

#best ice cream
#best of gothamist
#ice cream
#original
Do you know the scoop? Comment below or Send us a Tip