The 12 Best Hot Dogs In NYC

It's as iconic a NYC dish as a slice of pizza or a bagel with a schmear, but decades of "dirty water dogs" slander has somehow rendered the frankfurter a second-tier snack in the minds of many. This should not be the case! There are plenty of very good dogs out there, delivering that delicious salty snap and, if you're doing it correctly (with mustard and sauerkraut), a bracing hit of acid as well. For this piece I revisited the classics, checked out some newcomers, and confirmed that when it comes to the noble frankfurter, with a couple of notable exceptions, simple is the way to go.

Here are the 12 best that I've found; if you know of any glaring omissions—I can't find a great Colombian-style place, for example, not since Los Perros Locos closed—please tell everyone in the comments. 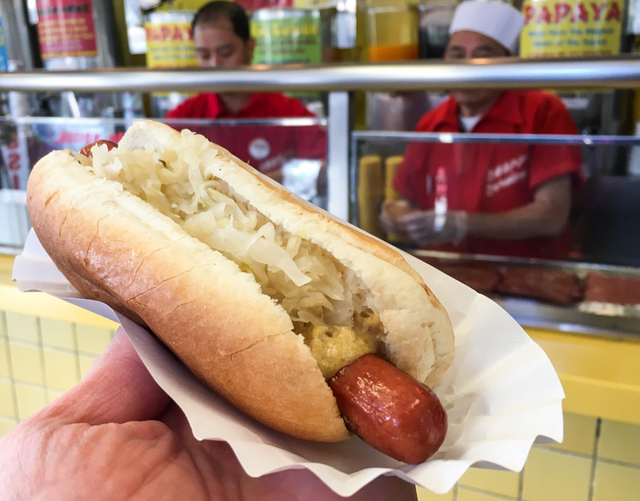 Gray's Papaya, two dogs and a drink for $5.95 (Scott Lynch/Gothamist)

GRAY'S PAPAYA: I feel like I've been eating these thin, juicy beauties my whole life, usually at that corner spot on 72nd Street, and usually later in the night, taking full advantage of the classic stand's 24-hour policy. Get the Recession Special, of course—two franks, one drink, these days $5.95—on offer here since the Koch years, squeeze into a spot at the counter, and taste the New York City of legend.

Gray's Papaya is located at 2090 Broadway on the Upper West Side and--just opened!--at 612 8th Avenue near Port Authority. 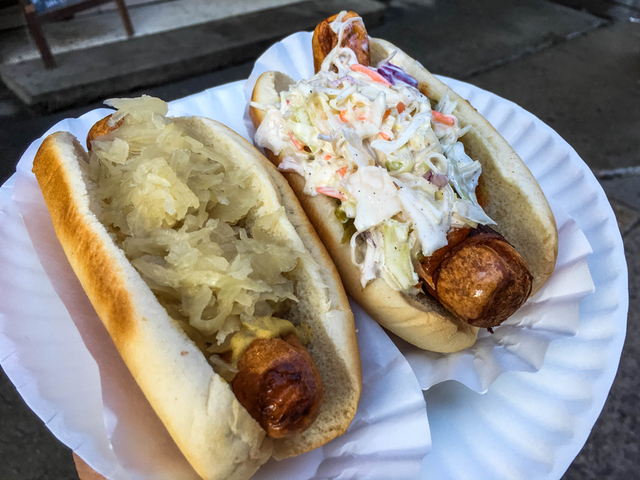 CRIF DOGS: Crif Dogs has been satisfying stoners on St. Marks with their crazy concoctions for about sixteen years now and, really, it's amazing how consistently delicious these things are, with a high-quality, crisp beef-and-pork tube steak base ($2.75), and a surprisingly judicious balance among the sometimes-many toppings. The sublime Spicy Redneck ($4.75), for example, is a house dog wrapped in bacon and topped with cole slaw, chili, and jalapeños, but every bite is in harmony, the whole obviously prepared with love. What could have been a dumb hipster parody--remember when they had all those Homies glued to the counter?--has instead become a vital East Village institution.

Crif Dogs is located at 113 St. Marks Place in the East Village, and at 555 Driggs Avenue in Williamsburg (crifdogs.com) 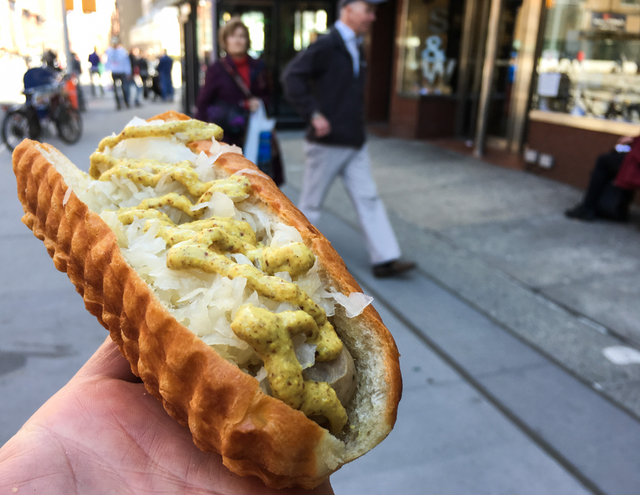 SCHALLER'S STUBE: There tends to be a lot of history behind NYC hot dog stands (the good ones, anyway), and Schaller's Stube is no exception. Positioned as a kind of "millennial" offshoot of its grandfather next door, the nearly century-old Yorktown butcher Schaller & Weber, Stube sells several kinds of wursts (Brat, Knack, Bauern) along with other old-world sausages like Kielbasa and Leberkase. Their dogs come nestled inside some excellent Balthazar brioche buns, and the toppings are infallibly appropriate, though my favorite is probably the simple Bratwurst/Kraut/Mustard "Classic" ($7), everything on the menu has made me happy (and filled me up).

Schaller's Stube is located at 1652 Second Avenue on the Upper East Side (schallerstube.com)

MILE END: It's been some seven years since Noah Bernamoff opened his Montreal-style Jewish Deli in Boerum Hill, and though his poutines and brisket get most of the attention here (and rightly so), the Hoyt Dog ($8) definitely deserves some love too. The all-beef frank is long and juicy, and the bun (a potato roll) and kraut (nice and tangy) also do their jobs well, but it's the slathering of sour relish that really bumps this puppy to the next level.

There are three Mile End locations, at 97A Hoyt Street in Boerum Hill, at 53 Bond Street in Noho, and at 230 Park Avenue (Urbanspace Vanderbilt) in Midtown (mileenddeli.com) 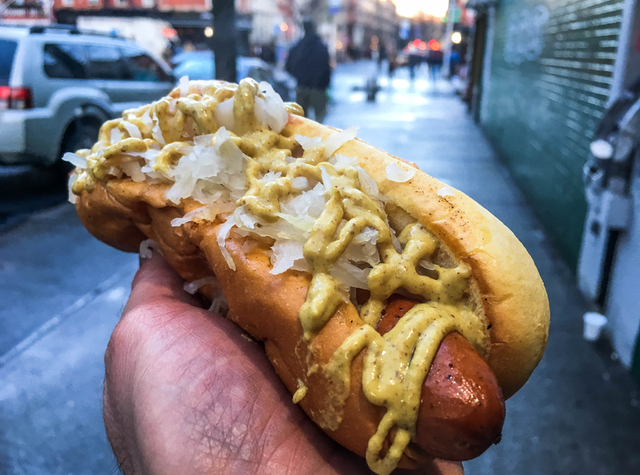 FELTMAN'S: Last summer I called the Feltman frank "likely to be the best hot dog you'll ever eat in your life," and, after gorging on dozens of different dogs all over town this past month, including a repeat visit to Michael Quinn's tiny window on St. Marks, I stand by those words. The Feltman's all-beef frank has perfect snap and a real depth of flavor that doesn't get lost whether topped with pungent grilled sauerkraut ($4) or smokey chili ($6). And now there's a Feltman's stand where it all began back in the 1860s, at Coney Island across from the Cyclone, so you can finally get something good to eat out there.

Feltman's is located at 80 St. Marks Place in the East Village and at 1000 Surf Avenue in Coney Island. (feltmansofconeyisland.com) 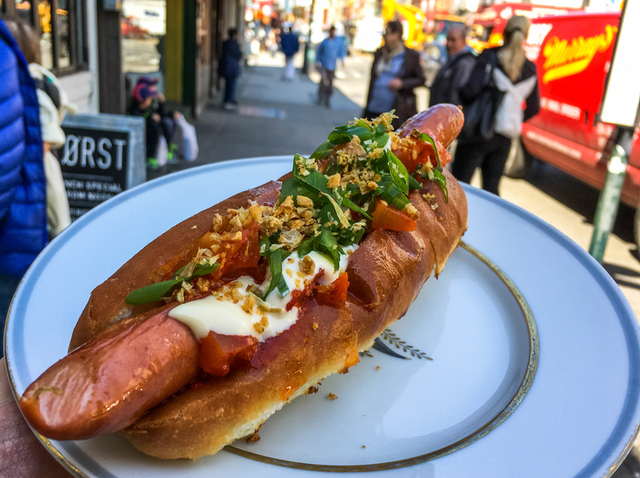 TORST: Everything on the new food menu at beer-geek bar Torst is fantastic, and the Hot Dog ($12) is no exception. This beast of a puppy packs a hefty, meaty punch on its own, but combined with chef Jesus Cervantes's fiery kimchi, crisp-fried scallions, and some sort of zippy white sauce, you not only have what is likely the perfect companion to one of Torst's 21 beers on tap, but also practically a full meal in itself. 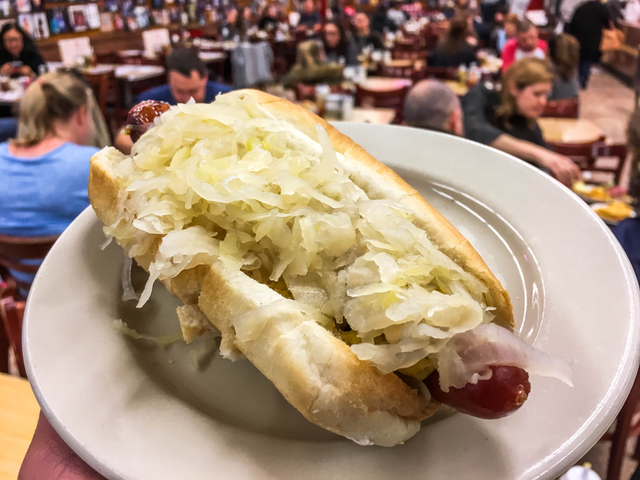 KATZ'S DELICATESSEN: Avoid Katz's at peak tourist hours unless you love lines, but definitely do stop in during their less busy times as often possible for, among other Jewish deli delights, this platonic ideal of the NYC Frankfurter ($3.95). Wonderfully charred, bursting with meat juice, covered with a hefty helping of kraut, wolfed down in a historic, borderline-chaotic Lower East Side dining room: this is hot dog heaven. 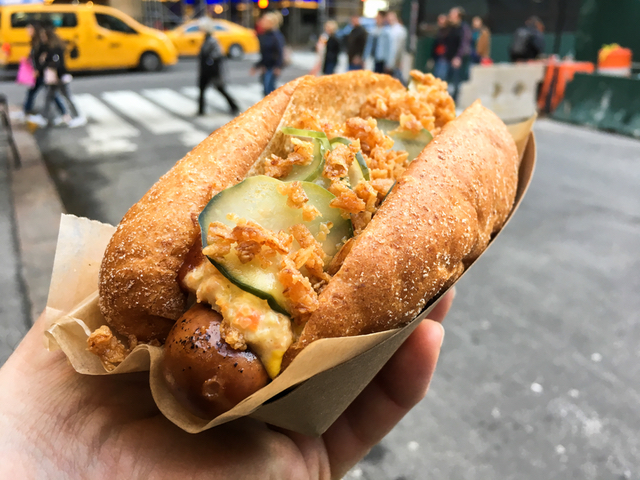 DANISH DOGS: The hot dog is as much of a staple in Copenhagen as it is here in the big city, or so I'm told. So having acclaimed "New Nordic" chef Claus Meyer open a sausage stand in Grand Central was a welcome addition to the city's hot dog roster. The Great Dane ($8) is the best choice here, with a beef- and pork-frank topped with what sounds like too much stuff (spiced ketchup, mustard, onion, remoulade, pickled cucumbers, crisp shallots), but it all holds together in convincing fashion.

Danish Dogs (aka The Dog Park) is located in the southwest corner of Grand Central, near the entrance to the Shuttle (greatnorthernfood.com)

SONS OF THUNDER: It makes sense when you think about it, that coleslaw would be a nice topping when you're tired of the usual kraut, and there's nowhere in town that does this combo better than Sons of Thunder, a poke place (of all things) on an uninviting block in Murray Hill. The Slaw Dog ($4.50) features an all-beef frank, cooked until the skin is blistered, smothered in cool, creamy, and well-carawayed coleslaw, with enough mustard lying in wait for extra zing. Makes you think that the slaw dog should be more of a thing!

Sons of Thunder is located at 204 East 38th Street in Murray Hill (sonsofthunder.com) 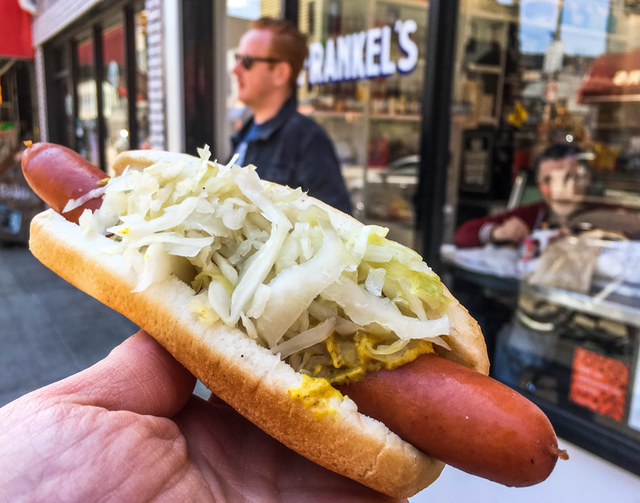 FRANKEL'S: I'd eat at Frankel's more often if they stayed open past freaking 4 p.m., but if you can get to this vibrant homage to the classic NYC Jewish deli during the day, then definitely get anything with pastrami and one these Hot Dogs ($3.67). It's as basic a frank as can be, which is a very good thing when each ingredient—dog, kraut, mustard, bun—aces its role. The music's always good here, too.

Frankel's is located at 631 Manhattan Avenue in Greenpoint (frankelsdelicatessen.com) 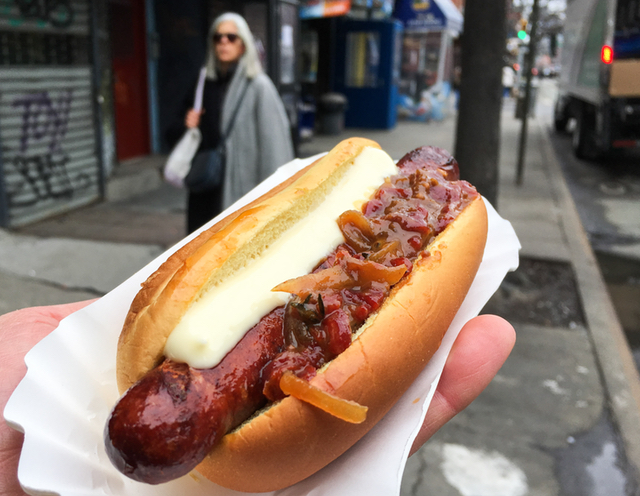 HUERTAS: One of the few interesting dogs that actually add something valuable to the canon, the Basque Dogs ($8.50) at East Village tapas spot Huertas are made with chistorra sausage (key ingredients: pork and paprika) and slathered with both a smooth white aioli and a chunky, sweet, and tangy piquillo mostardo sauce. It could be too much, but it's balanced enough to work. In summers past they've opened a dedicated Basque Dog window out onto First Avenue, and these perros perfectos are often featured with some kind of happy hour deal at the bar.

Huertas is located 107 First Avenue in the East Village (huertasnyc.com) 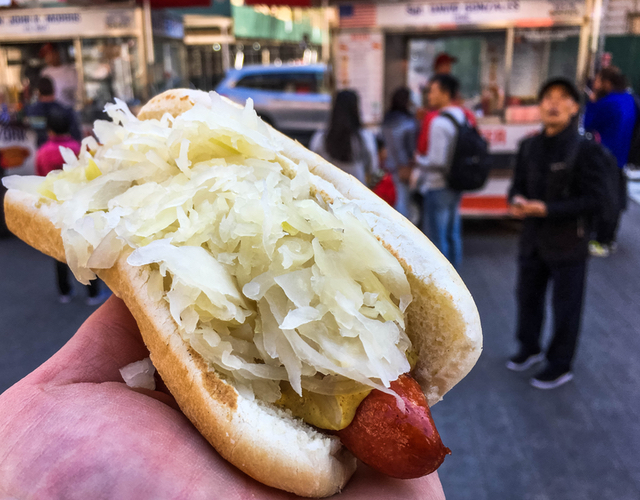 Street dog outside of the Met, $3 (Scott Lynch/Gothamist)

STREET DOGS ALMOST ANYWHERE: I sometimes go years without eating a street dog, mostly because I forget they exist, the ubiquitous umbrellaed carts blending into the streetscape. But what I've learned and relearned over the decades is that these franks are always much better, and make for a more satisfying snack than I remember or ever expect. Griddled beats boiled, sure, but even dirty water dogs are unfairly maligned—give your local cart a shot.

Hot dog carts are everywhere. The three I visited this past month were in front of the Met (pictured, $3), near Union Square ($2), and in the Financial District ($2)

#best of gothamist
#hot dogs
#original
Do you know the scoop? Comment below or Send us a Tip