The 12 Best Falafels In NYC

There's so much to like about falafel: it's (generally) inexpensive, incredibly filling and satisfies requirements from all kinds of dietary needs, making it accessible to just about anyone. It's a beloved vegetarian staple that's embraced by meat eaters and a somewhat virtuous fried food, if that's even possible. We're blessed with an array of diverse and delicious falafel joints in this city; here are some of our favorites, but tell us what we missed in the comments. 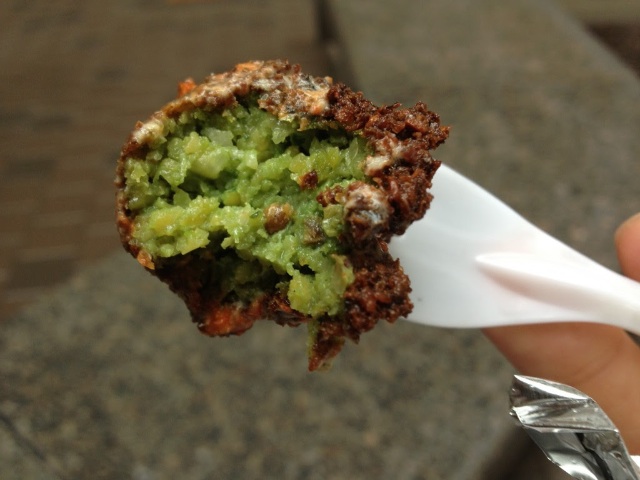 ADEL'S #1 HALAL CART: If New Yorkers get tired of "street meat", they can always go vegetarian, since falafel is found at most halal carts around the city. One of the best street falafels comes from a humble little cart down in the Financial District that has long lines of business people, construction workers, and crews from nearby movie shoots. Adel hails from Egypt and fries up the falafel throughout the day to ensure a fresh, crunchy experience. It's loaded with green herbs like mint and parsley, bringing the fritters to life. The line moves quick and the $4 price is unbeatable for a large platter. 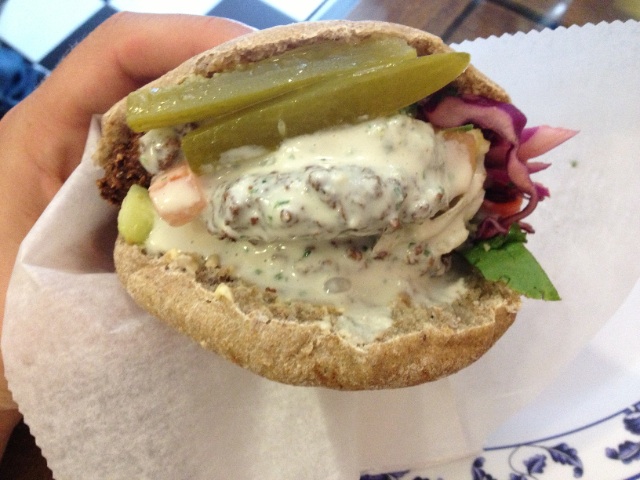 AZURI CAFE: Ezra Cohen's name doesn't get mentioned in the food world as often as, say, David Chang or Dominique Ansel, but it should. He's the notoriously grouchy falafel master reigning over the old school Hell's Kitchen haunt known as Azuri. The Israeli chef keeps it strictly kosher (so don't expect to visit on Saturday) and makes overstuffed falafel sandwiches ($7.75) as good as anything you can get in the Holy Land. The tender, puck-shaped falafel fall apart upon touch but retain a serious crunch and an earthy, tangy flavor. Sandwiches are customized and can be filled with an array of pickles, vegetables, and sauces, like hummus, tahini or amba (mango sauce). Consider this a religious experience. 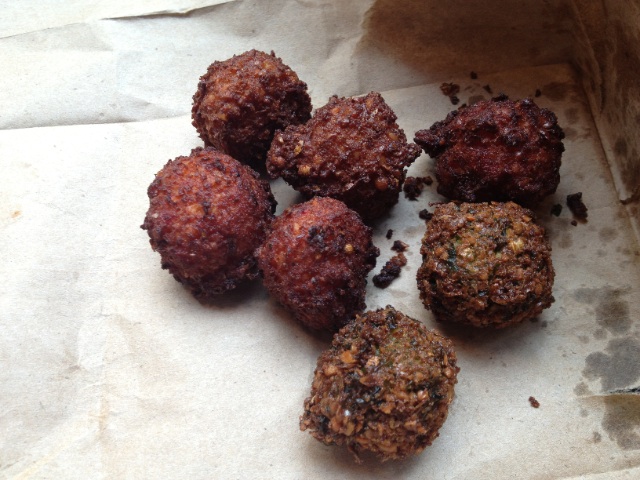 TAÏM: Since chef Einat Admony opened Taïm in 2005, she has written cookbooks, opened three more restaurants (and a food truck), and changed the New York falafel scene forever. Her falafel (Sandwich: $6.75, Platter: $12.75, Sampler: $4) come in three different flavors: the traditional green (with parsley, mint, cilantro), harissa (with a pleasant smoky spice), and red (sweet peppers mingling with the chickepas). Special creative falafel flavors often make an appearance, including our favorites: kalamata olive and spinach jalapeño. These bite-sized balls are made with the freshest ingredients and are juxtaposed with crunchy and soft textures. The word Taïm is Hebrew for "tasty" and it only takes one bite to understand why that name is appropriate.

Taïm has two locations in Manhattan and one foods truck: 222 Waverly Place between West 11th and Perry Street in the West Village (212-691-1287); 45 Spring Street at Mulberry Street in Notlia (212-219-0600); Check out Twitter to find out when the truck is in your area next. taimfalafel.com 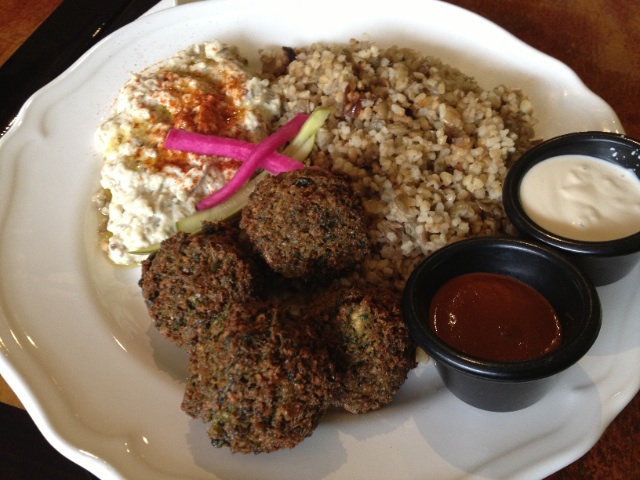 WAFA'S: Unless you're familiar with the block of Metropolitan Avenue in Forest Hills that houses this comfortable Lebanese neighborhood restaurant, you might overlook Wafa's from its humble exterior—much to your detriment. Larger than most in New York City, the deeply browned falafel give you lots to chew on. Inside, it's loaded with herbs, seeds, spices, and vegetables. There's even a muted cinnamon-like sweetness on the finish. The tahini here is of the Lebanese variety, mixed with mayonnaise for a subtle, thicker body. A sandwich'll set you back $6.50, with a platter going for $12.95. 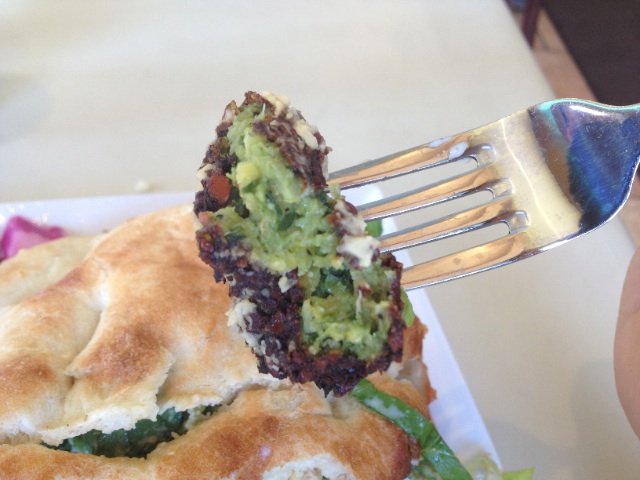 HAZAR TURKISH KABAB: While the name of this Turkish restaurant in Bay Ridge suggests that you should stick with their kababs, you'd be crazy to pass up the falafel orbs at Hazar. The falafel here is fried darker than most yet still seems to maintain a creamy, moist center. They manage to fit just about everything inside: herbs, spices, sesame seeds, and could those be pine nuts? Each bite is loaded with flavor and texture and they make an excellent, colorful sandwich ($6.50) stuffed with purple radishes, red tomatoes, green lettuce, and rich creamy tahini. They should probably call this place Hazar Turkish Falafel. 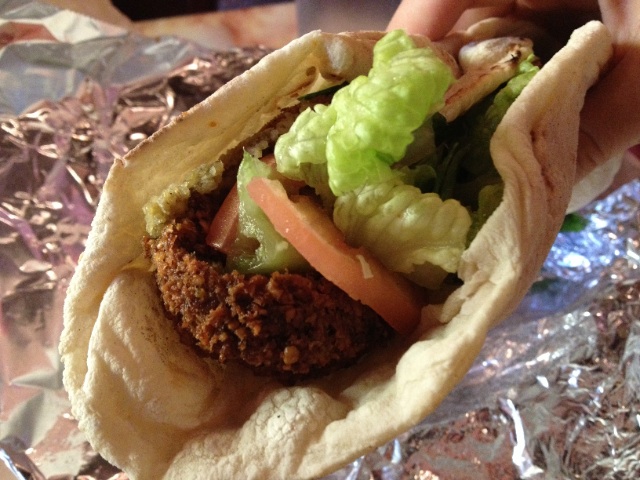 BEDOUIN TENT: Up front, the takeout area is hot and cramped, but the colorfully-decorated back dining room is reminiscent of a true bedouin tent (a tent made from goat or camel hair that allows one to stay safely and comfortably in the desert). A haven from the noise and heat of a New York summer, this Jordanian-owned restaurant concocts a falafel in the form of a large patty. It's perfect for their homemade wrapped pita sandwich (as opposed to the pocket variety) and it's a steal at just $4.50. The falafel itself is laced with red pepper flakes, giving it a bold kick along with a lively crunch. Always ask for extra of their special spicy tahini sauce.

Bedouin Tent is located at 405 Atlantic Avenue between Bond and Nevins Street in Boerum Hill, Brooklyn (718-852-5555) 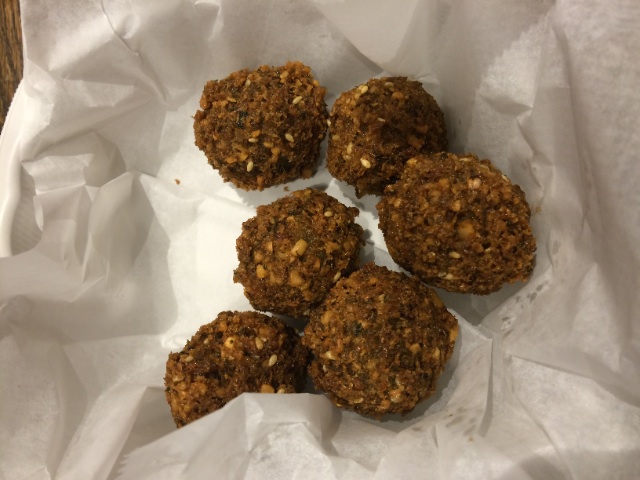 BA'AL CAFE AND FALAFEL: Ba'al is the name of an ancient god of fertility and agriculture—but it might as well be the god of cheap eats. This modest little joint sits away from the crowds in SoHo and those in the know have experienced their stellar food, namely their falafel. The spheres ($6.50 in a sandwich or $3.50 as a side) are fully-loaded with just about every type of seed imaginable. Despite its small, compact size, it still boasts a wallop of textures: fried to a crunchy perfection while retaining a soft, tender interior.

Ba'al CafE and Falafel is located 71 Sullivan Street between Spring and Broome Street in Soho, (646-368-9957, baalfalafel.com) 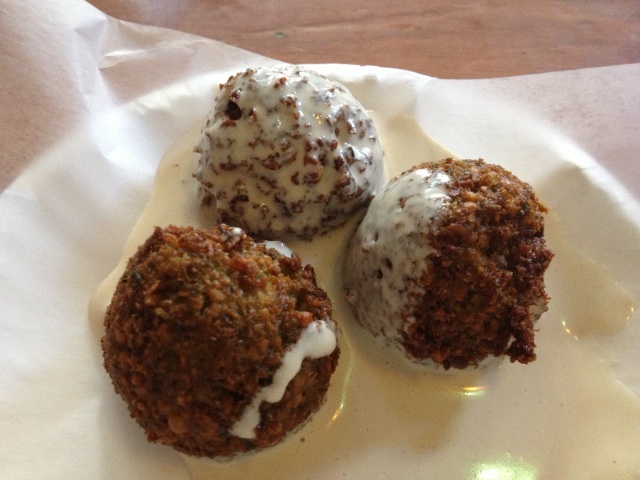 MAMOUN'S FALAFEL: Mamoun's claims to be the first falafel restaurant in the city (opened in 1971) and it is still probably the most popular. With their two prime locations on both sides of the Village, the long lines of hungry bar-goers and students speak for themselves. It'd be easy to write them off as being over-hyped, but there is just no denying they still make a tasty and fast falafel. The sandwiches are decent here, but the side of hot, crisp falafel for $2 (the price seems to go up every year) doused in tahini and hot sauce makes the perfect snack. 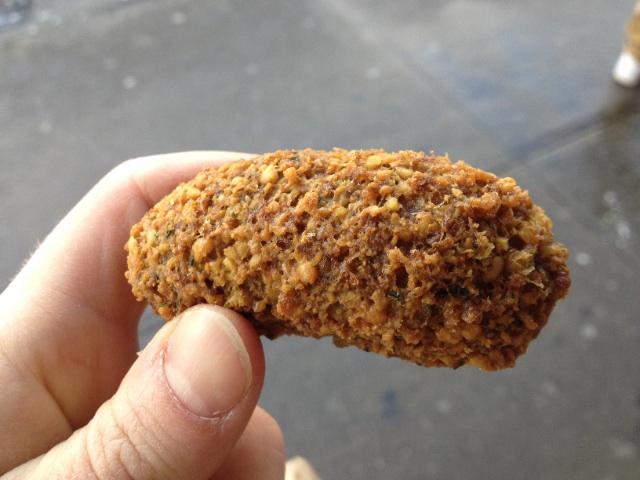 KING OF FALAFEL & SHAWARMA: Freddy Zeideia is not called the King for nothing. The Vendy Award-winner has been a legend in Astoria for years and has more recently brought his incredible falafel to the streets of Midtown. His Palestinian falafel are log-shaped and feature a crunchy, greaseless exterior revealing a soft, steamy center. Earthy chickpea flavors are the main tasting notes, but pepper, herbs, and a unique hint of fennel seeds shine through. It's hearty and filling and makes you want to bow down to his excellence. All hail the King! 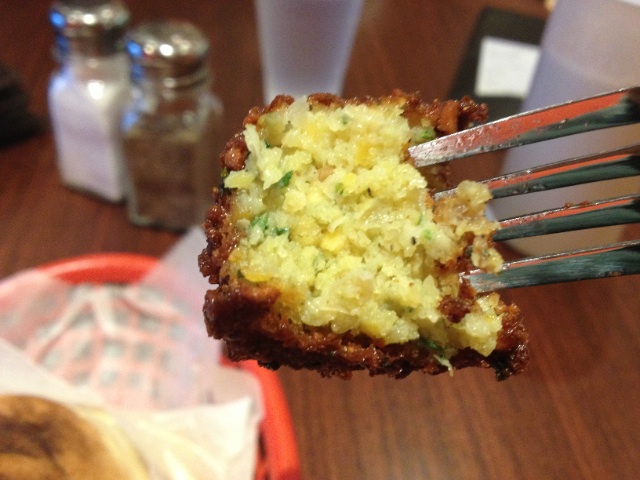 MURRAY'S FALAFEL: This is the underdog of the group and doesn't usually get much attention. Murray's sits in the shadow of Stuyvesant Town and is often passed up even by those who live in the maze of historic red-bricked buildings. Most people are shocked when they get a taste of this Israeli-style falafel. Without the overabundance of green herbs and fillers, the chickpea flavor shines through the crunchy, hot exterior. The sandwich ($6.95 - $9.95) has a few extras (cucumbers, tomatoes, cabbage), but is mostly made up of the large falafel (it even comes with an extra falafel on the side for an unadulterated taste). Don't miss out on the red pepper-flecked green hot sauce. 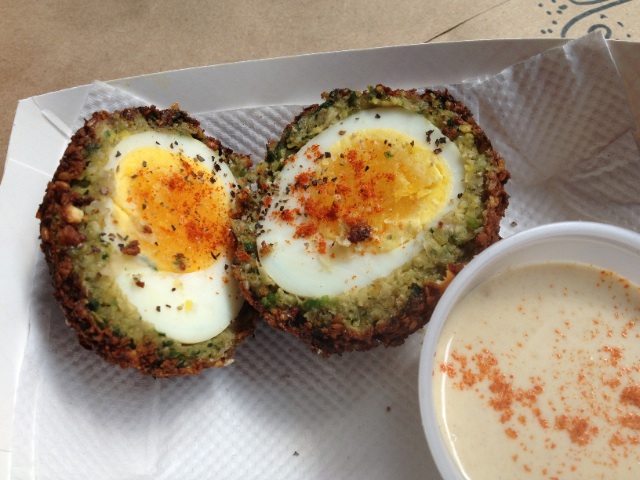 EASTWOOD: Eastwood is a charming neighborhood bar deep in the heart of the Lower East Side owned by an Israeli-Scottish couple. The flavors of the distinct cuisines come together at a take-out shack around the corner from the bar where they specialize in salads and everything fried. The falafel sandwich ($8), loaded with coleslaw, bright tomatoes, and crispy french fries, rules over the makeshift seating area. On its own, it is a modern take on a classic Israeli street food, but Eastwood takes it one step further by creating a falafel Scotch egg ($4), a memorable hybrid masterpiece. 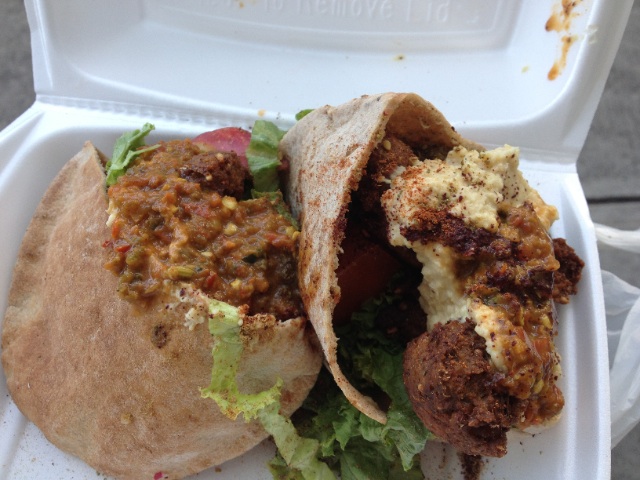 KABAB CAFE: Dinner at Kabab Cafe is a unique experience. Menus are not set on the table; instead Egyptian owner and chef Ali El Sayed gives you some suggestions based on your likes before he heads into the open kitchen to prepare your meal. One of the best dishes always available is his mixed meze platter featuring tiny falafel that pack a big punch. The falafel are fried in a pan (instead of a deep-fryer), giving them a more rustic and home-cooked feeling. It's on the dense side due to its size, but the falafel features big flavor and crisp textures with generous spices, seeds, and beans. You can also try them in a sandwich ($5) to-go, but eating in (and chatting with the chef) is part of the experience.