The 12 Best Comfort Foods In NYC

'Tis the season to trade in your shorts and tank tops for an extra layer of delicious human blubber. Your body is no longer satisfied with salads, watermelon and self-serve frozen yogurt, instead crying out for carbohydrates and sweet, sweet bacon. There's no shame in craving heavy, warming food in the winter, especially as the SADs sets in—has anyone else noticed it's midnight by 4 p.m. now?—and your radiator starts sounding like a creature from the dark is trapped inside it. Only four more months 'til spring, everyone! So here are our favorite comfort foods in the city—feel free to list yours, and your post-winter workout plans, in the comments. 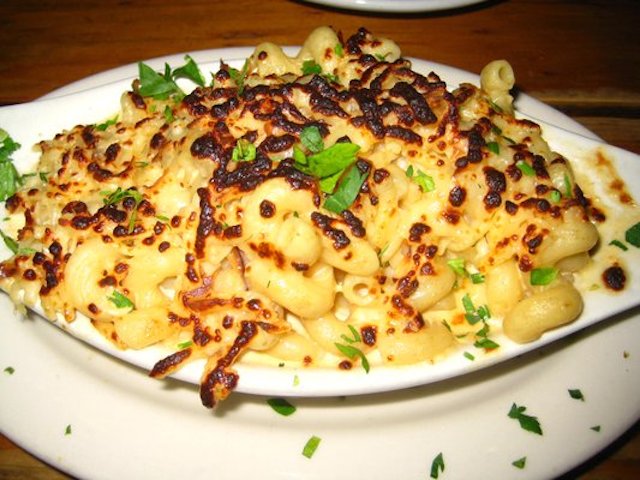 SMOKY MAC 'N CHEESE AT WESTVILLE: When in desperate need of a calming bite to eat, cheese is always your best bet. And when that cheese comes melted, creamy and baked with elbow pasta and bits of bacon, well, you've hit the jackpot, sir. Westville's smoky mac 'n cheese ($8) is really an appetizer, but it's so rich and filling—particularly when served with the optional bacon—you can get away with making it a meal if you pair it with a small salad. The mac 'n cheese is made with gouda bechamel, so there's no faux-orange Velveeta situation going on here; the cheese hugs thick, twisted macaroni noodles, and, if you've opted for it, smokey sprinkled bits of bacon, warming your insides with its creamy, heated heft.

Westville has multiple locations in Manhattan; check out their website for hours and more information. 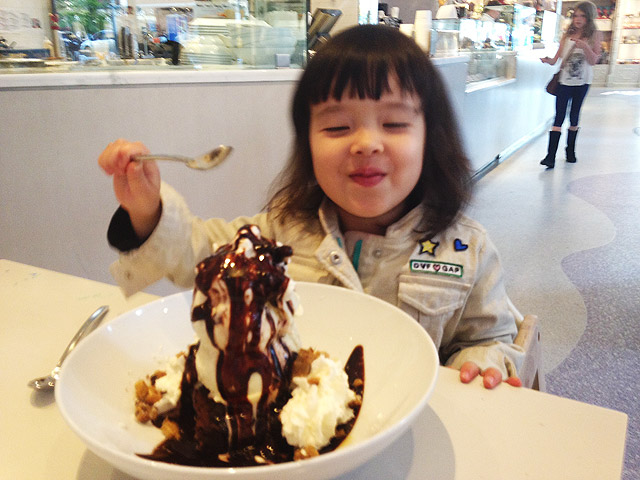 BROWNIE SUNDAE FROM SUGAR & PLUMM: Few foods satisfy a sweet tooth quite like a fresh-baked brownie sundae, complete with gooey hot fudge and creamy ice cream. Sweet shop Sugar & Plumm hits it right on the nose with their take on the classic dessert, drowning a brownie in piles of high-quality ice cream scoops and dolloping the whole shebang with hot fudge.

There are a whole bunch of brownie sundae options here, including a mint chocolate offering complete with peppermint patties and mint chocolate chip ice cream; for a real special treat, though, we recommend the Brownie a la Mode ($12), which comes with hot chocolate and salted caramel sauces, a whole, hot brownie, vanilla ice cream and fresh whipped cream. And yes, these bad boys are technically easy to share, but if you try to take even one bite of mine, I will shiv you. 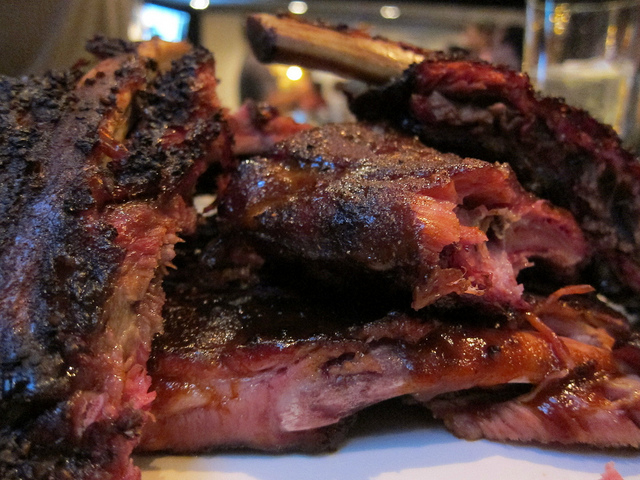 BARBECUE RIBS AT BLUE SMOKE: If you feel the need to eat your feelings via giant hunks of meat, the massive barbecued ribs at this Danny Meyer joint should do the trick just fine. The juicy Kansas City spareribs ($18/$28) have a fiery kick for the spice fiends, while the dry-rubbed Texas Salt & Pepper Beef Ribs ($18/$28) boast a subtler smokey flavor. If it's just too hard to choose, opt for the $23 sampler, which comes with both Texas and Kansas City offerings along with a helping of sauce-slathered Memphis style baby back ribs. Ignore the tourists and feast at will. Beef cures all that ails you. 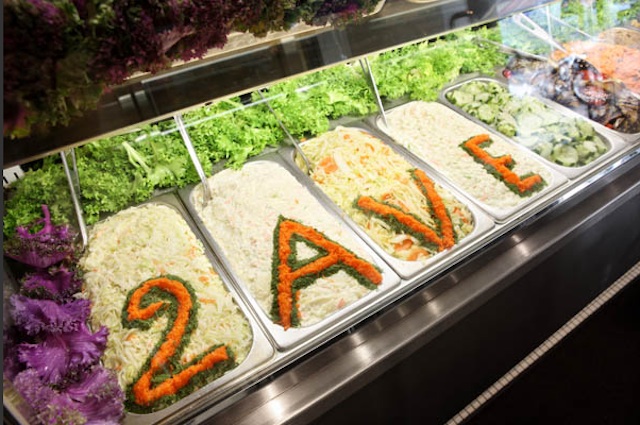 TUNA SALAD SANDWICH AT 2ND AVENUE DELI: Kosher delicatessens are prime spots for soothing comfort food pangs, with those hot pastrami sandwiches and generous helpings of corned beef on rye. But for an intestinal itch you really can't scratch, try the 2nd Ave Deli's simple tuna salad sandwich ($12.95), a heaping helping of savory tuna, lettuce and tomato smushed between two thick pieces of wheat, white or rye. Pair your sandwich with a side of cole slaw and a can of Dr. Brown's cream soda or Cel-Ray to wash it down, and expect magical things to happen inside your stomach. 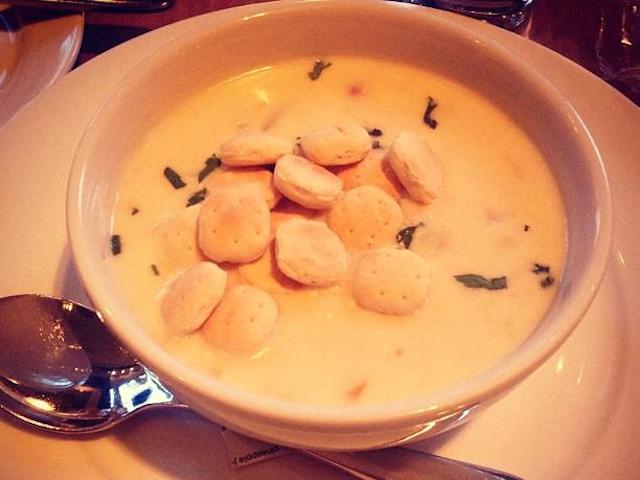 NEW ENGLAND STYLE CLAM CHOWDER AT ED'S CHOWDER HOUSE: One of my fondest cold weather food memories involves eating creamy clam chowder in a carved-out loaf of bread somewhere deep in the frozen bowels of touristy Boston, right before some cruel teacher forced me to walk the Freedom Trail. And though the chowder at this upscale Empire Hotel eatery isn't as cheap or bread-y as it as at, say, Quincy Market, it'll do the trick just fine.

A bowl of the New England-style stuff runs $14 at the Chowder Bar and comes stocked with clams, bacon and potatoes steeped in the creamy soup base. If that's not enough for you, opt for the $17 loaded shellfish chowder, which, as its name suggests, is filled with all sorts of seafood goodies floating in a steamy broth.

Ed's Chowder House is located at 44 West 63rd Street between Central Park West and Broadway (212-956-1288, chinagrillmgmt.com). Follow them on Facebook. 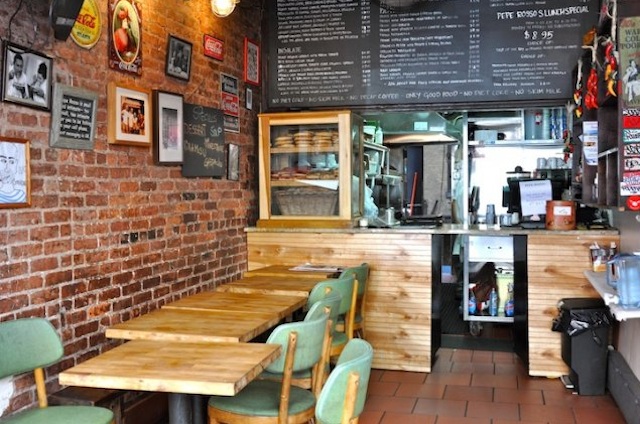 SPAGHETTI BOLOGNESE FROM PEPE ROSSO TO GO: In Bologna, they call their signature meat sauce "al ragu," and it's typically served over flat tagliatelle pasta instead of round spaghetti noodles. But we'll forgive this hole-in-the-wall SoHo spot for its Americanization of the dish, which here is presented as a steaming bowl of al dente spaghetti, thoroughly doused with tomato sauce and hearty bits of ground beef. The $11.90 bowl is served to go, which makes it a popular spot with the Houston Street lunch crowd. But if you need some out-of-the-office time with your soul-soothing feast, Pepe Rosso does have about 8 to 10 seats inside; though do expect to fight someone for a chair if you go at a busy hour.

Pepe Rosso To Go is located at 149 Sullivan Street between Prince and Houston Streets in SoHo (212-677-4555, peperossotogo.com). 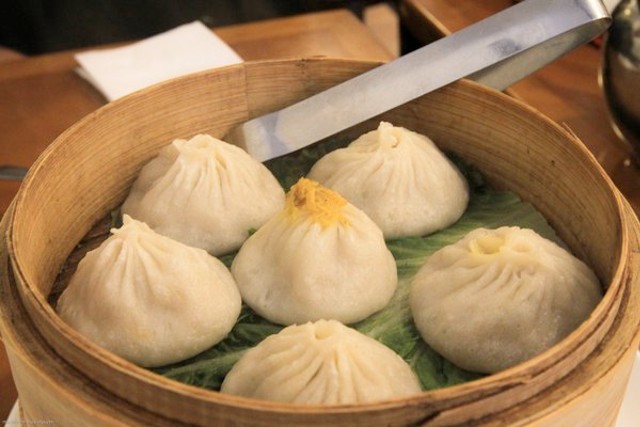 SOUP DUMPLINGS AT NAN XIANG DUMPLING HOUSE: We've praised this Shanghainese dumpling emporium's soup dumplings before, and we'll do it again. The dumplings, called xiao long bao, are Nan Xiang's specialty, and they come fresh and hand-made, wrapped in thick dough and filled with soup, pork and crab. No matter how good they smell, do note that these babies come piping hot and will leave your tongue with third degree burns if you try to down them too quickly. Bring cash and be prepared to wait a while for a seat no matter what time of day you show up. 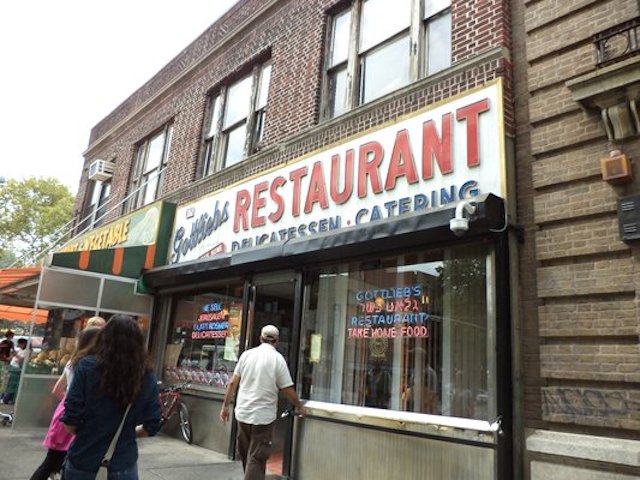 MATZO BALL SOUP AT GOTTLIEB'S RESTAURANT: Matzo balls in chicken broth have long been dubbed the Jewish penicillin, and we have to agree. Whether you're feeling sick, blue or just generally hungry, these floating knobs of matzo meal and wonder will rejuvenate you lickety split. And the matzo ball soup at Hasidic South Williamsburg delicatessen Gottlieb's is killer; for $4, you get a steaming bowl of savory, fatty chicken broth loaded carrots, celery, spices, a sprinkling of noodles and a hearty matzo ball or two. Ah, soup, bei mir bist du shayn (to me, you are beautiful). 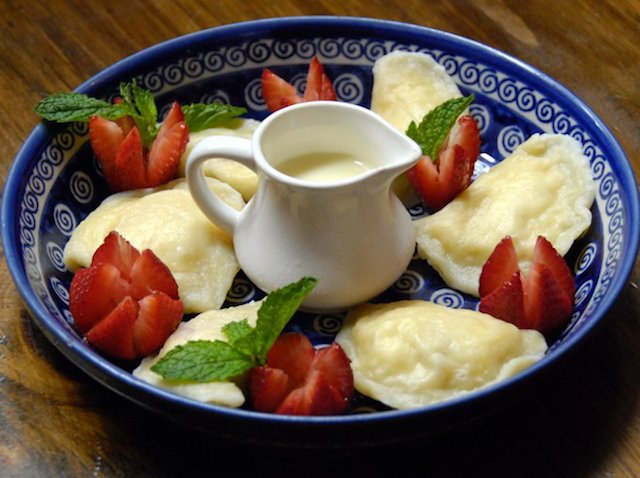 PIEROGI AT KARCZMA POLISH RESTAURANT: There's something about potato, cheese and other warm-and-fuzzy foods wrapped in dough that speaks to a disquieted mind and body, and pierogi are no exception. The traditional Polish dumplings at this Greenpoint eatery are among the best in the city. Here, you can choose between steamed and fried pierogi, and they come with a variety of stuffings, like cheese and potato, mushroom, and meat. Six pierogi run $6, and they come served with a side of sour cream for dipping; leave room for a bowl of white borscht ($3.50) made with fermented bread, sour cream and sausage, if you're feeling saucy.

Karczma is located at 136 Greenpoint Ave between Franklin Street and Manhattan Ave in Greenpoint, Brooklyn (718-349-1744, karczmabrooklyn.com). Follow them on Facebook. 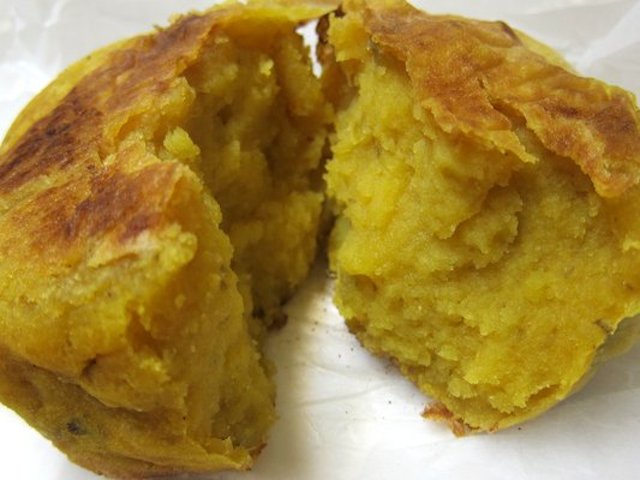 SWEET POTATO KNISHES AT YONAH SCHIMMEL KNISH BAKERY: Knishes—baked, grilled, or fried dough cakes filled with potatoes, meat or vegetables—are another Eastern European Jewish staple food, and Yonah Schimmel on the LES has been baking them to perfection for over a century. Though you can get a wide variety of knishes here—mashed potato, mushroom, spinach, etc.—their cakelike sweet potato knishes are the key to turning around any bad day. Knishes run $3.50-$4; make sure you get them right out of the oven for the ultimate cold weather snack.

Yonah Schimmel is located at 137 East Houston Street between 2nd Ave and Chrystie Street on the Lower East Side (212-477-2858, knishery.com). 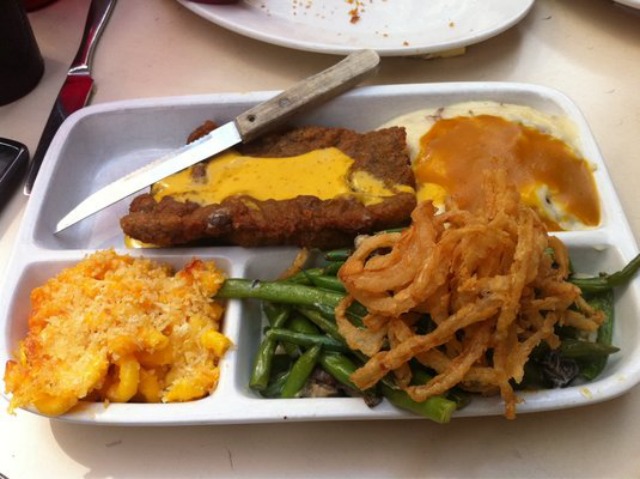 TV DINNER AT CHAT 'N CHEW It may be a little rough around the edges these days, but this Union Square college student staple still turns out some of the most indulgent comfort food around. My personal go-to when I'm in the mood to splurge: their chicken fried steak ($15.75). As if steak weren't comfort food enough, they're breading and deep frying that bad boy, then smothering it in an alarming-shade-of-yellow gravy.

On the side, they're serving all the classic TV dinner fixings, like creamy mashed potatoes with savory gravy, extra gooey mac 'n cheese casserole and the obligatory green vegetable in the form of...creamed string beans topped with fried onions. I've never been able to finish a meal, but believe me I've tried; when it tastes that good, you just don't want to leave anything on the plate. Nell Casey 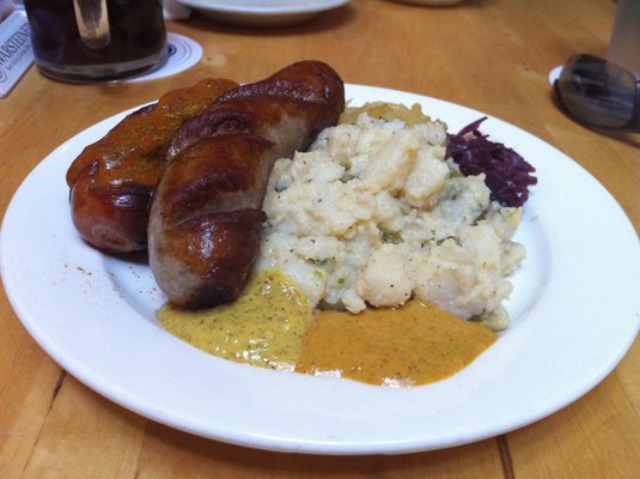 Wurst Platter from Lederhosen (via Yelp)

WURST PLATTER AT LEDERHOSEN If you're going to be imbibing a liter of Hofbrau or two, you'd do well to lay down a protective layer of meat and potatoes before things get out of hand. This West Village beer house keeps out the frat bros (for the most part), meaning you can actually enjoy a meal without some idiot trying to chug his entire beer in your face. I'm partial to their wurst platters ($12): two juicy sausages, cabbage, sauerkraut and plenty of good German mustard, and your choice of spaetzle (tasty fried "noodles"), German potato salad or mashed potatoes. Traditional bratwurst is great here, as is the weisswurst and bauernwurst; you really can't go wrong with whatever tubed meat you pick. Nell Casey

Lederhosen is located at 39 Grove Street between Bedford and Bleecker Streets in the West Village (212-206-7691, lederhosennyc.com). Follow them on Facebook.