The 12 Best Chicken Wings In NYC

Chicken wings, the second best part of that essential bird, may have become associated with fall and football-watching, but I tend to eat them as much as possible all year long. Like other ubiquitous dishes however (burgers, fries, ice cream), wings—whether Buffalo, Asian, barbecue, jerk, or just straight-up fried—can tragically disappoint as often as they send you soaring to an fiery, messy heaven. What follows is all about the latter, a dozen ways to feel extremely happy while eating with your hands. 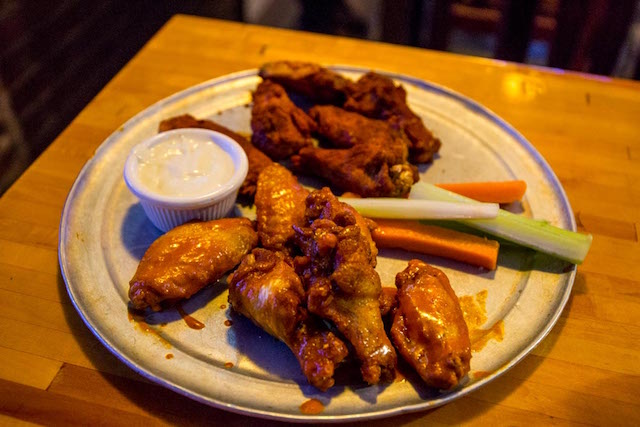 The Kettle Black's Buffalo City and Fitzpatrick's Wings, 6 for $7.95. (Photo by Scott Lynch/Gothamist)

The Kettle Black: Bay Ridge has more than its share of lively neighborhood pubs that encourage sports watching, but it's The Kettle Black that really nails the form. Go on any night of the week and the spacious, memorabilia-covered place will be festive with regulars sipping beers, shouting at screens, and tucking into platters of these exceptional chicken wings. The wings come sauced, glazed, or rubbed about a dozen different ways, but the basics seem like the best way to go, whether that means their excellent take on the classic Buffalo, or generously coated in a zippy blend they call "the original 87th Street dry rub." 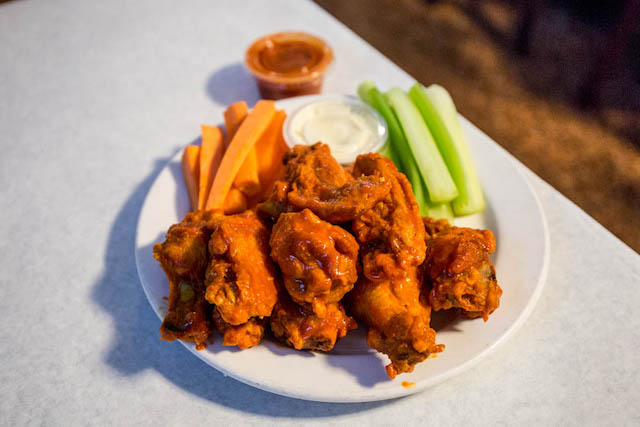 Blondie's: It feels like this Upper West Side sports bar has been around forever—and the subterranean space, ablaze and ablare under 60 TVs, is definitely a hangover waiting to happen—but even after all these years Blondie's signature Buffalo Wings consistently arrive at your table cooked to crisp perfection. Note that anything above "Hot" on the spiciness scale is to be eaten with caution. 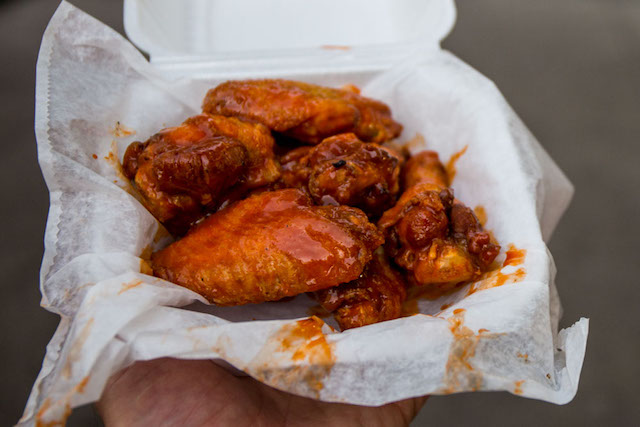 Brooklyn Wing House: This take-out-only Crown Heights spot has only been open since August, but holy smokes do they serve some delicious, big-flavored wings. There are some little-seen varieties available at Brooklyn Wing House, including Sweet Chili Rum Glazed and Dusse Infused (neither of which I can vouch for), but both the straight-up Hot Buffalo and the Jerk Wings are fantastic, and probably the absolute juiciest in town. 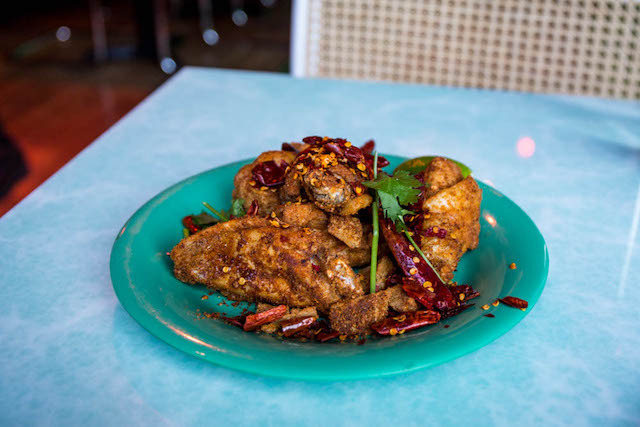 Mission Chinese Food: The hottest wings I ate during this recent round of restaurant revisits was certainly these magnificent beasts from Danny Bowein and Angela Dimayuga's kitchen at the great Mission Chinese. Untempered as ever (except by the numbing peppercorns) the tender, crackling, Xinjiang spice-rubbed Chongqing wings earn every one of the three "warning flames" on the menu, and the bits of equally crisp and fiery beef tripe scattered about the plate are one of the best bonuses of any dish in town. 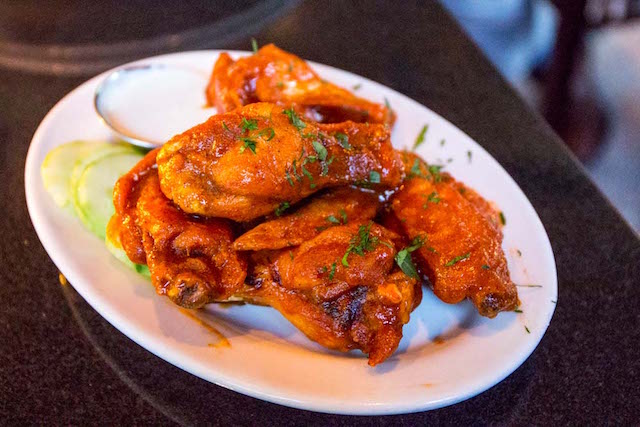 Daddy-O: Tucked away on Bedford Street just far enough off the Village's main party strips filled with tourists and weekend warriors, Daddy-O has, despite its considerable strengths as a sports pub, managed to maintain a chill neighborhood vibe for nearly 20 years. There are a couple of menu items that are unusual for these parts—especially worth trying is their version of Rochester's fabled Garbage Plate—but also definitely get the Buffalo Style wings, which are saucier than most around town and well worth the mess. 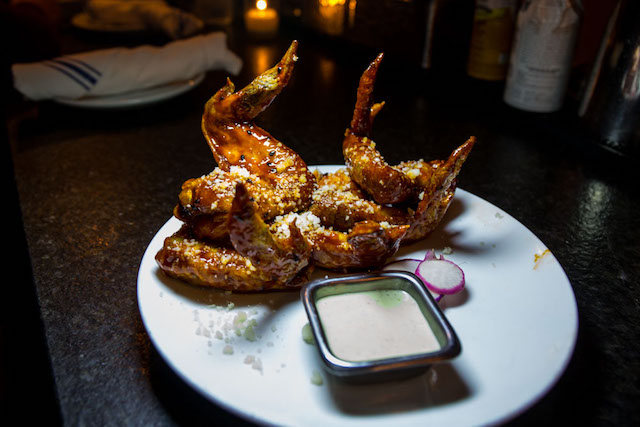 Emily Brooklyn: Every night people still pack into the original Emily to feast on individual pizzas and/or the massive Emmy burger, but it's the little-discussed Nguyen's Hot Wings that may actually be my favorite thing on the menu. Available only at Emily and Matthew Hyland's Clinton Hill restaurant, these fat, explosively-flavored wings get their considerable character from the red chili paste gochujang, as well as a generous dusting of pecorino, with a crock of homemade ranch smoothing things out nicely.

Emily Brooklyn is located at 919 Fulton Street between Waverly and Clinton Avenues (347-844-9588; pizzalovesemily.com) 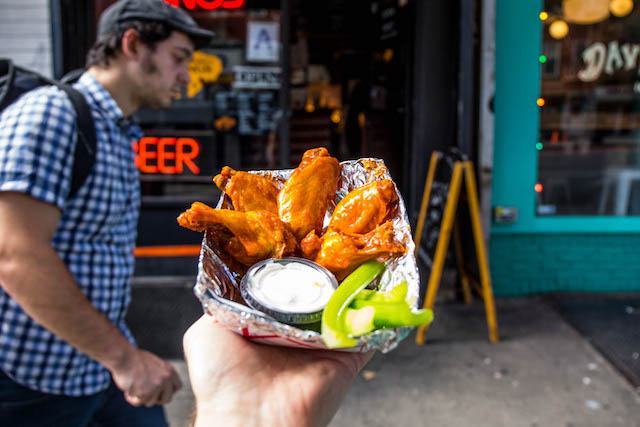 Dan and John's: This Smorgasburg mainstay found a fixed home in the East Village a couple of years ago (it's mostly a take-out spot, though there are a few stools by the window), but whether you get these Buffalo-style beauties from a tent or the storefront, you can expect crunchy, juicy delights, and as fiery as your desires can handle. Bonus: as at most great wing spots, the celery sticks are fresh and bright, and actually add an extra bit of pleasure to your meal. 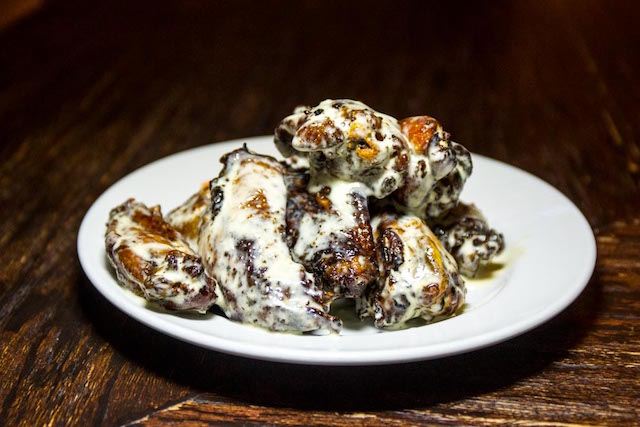 Blue Smoke: Danny Meyer's popular Blue Smoke restaurants are kind of a mixed bag, barbecue-wise, but I've never been anything but happy and satisfied after tearing through a pile of these Smoked Chicken Wings. The subtly-smoky bird bites are surprisingly juicy as is, but really come alive when drenched in the boldly-flavored Alabama white sauce.

There's a Blue Smoke at 116 27th Street between Park and Lexington Avenues, and in Battery Park City at 255 Vesey Street (bluesmoke.com) 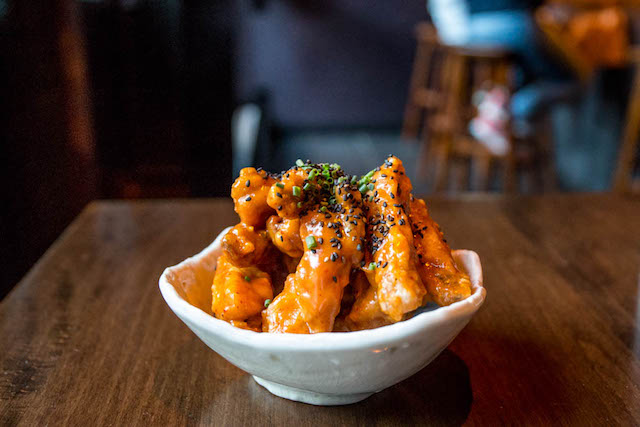 Bar Goto: Eldridge Street always feels like a bit of an oasis between the party scenes of Bowery and the Lower East Side, and this cozy, two-year-old cocktail bar from a Pegu Club alum is no exception. Most relevant to this discussion, however, is Bar Goto's short menu of Japanese comfort food, including a pretty white bowl piled high with spicy Miso Wings. These delightful snacks are drenched in sticky sauce, sprinkled with scallions and black sesame, and generally provoke a quiet eating frenzy as soon as they hit the table. 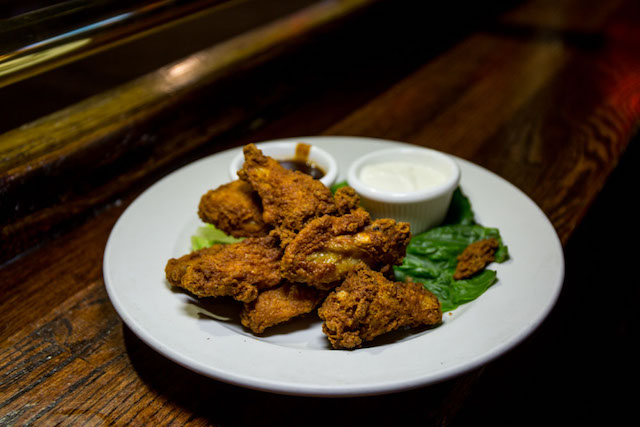 Skinflints: Another Bay Ridge institution, Skinflints hosts a raucous sports-bar scene up front and a pair of overly-decorated (and also raucous) dining rooms in the back. Regulars order with confidence from all over the long and varied menu, but I'm here to tell you that the Chicken Wings Zings are where you should start, an eight-pack of well-seasoned, crunchy-fried snacks that are improved further with a quick dip in the tangy ranch that comes with. 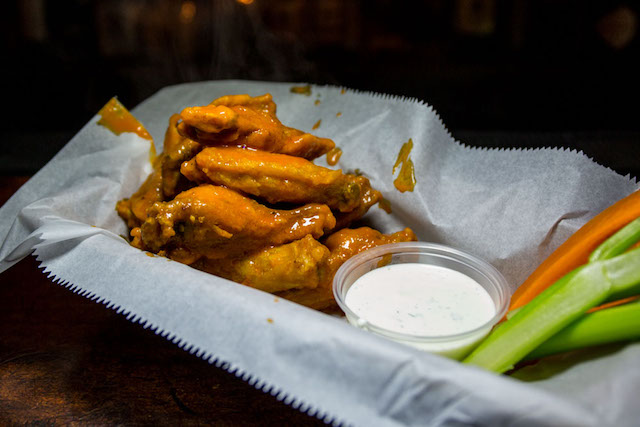 Wogies: This no-frills, Philly-founded Greenwich Avenue bar can get loud with suits at happy hour (the Financial District is even worse), but the seen-it-all bartenders are total pros and the Krazy Kate's Wings are everything you want in a Buffalo-style snack basket. Crisp, meaty, spicy, served with either blue cheese or ranch—or be a high roller and get both—these saucy beasts get the job done.

Wogie's is located in the West Village at 39 Greenwich Avenue at the corner of Charles Street, and 44 Trinity Place between Rector and Edgar Streets (wogies.com) 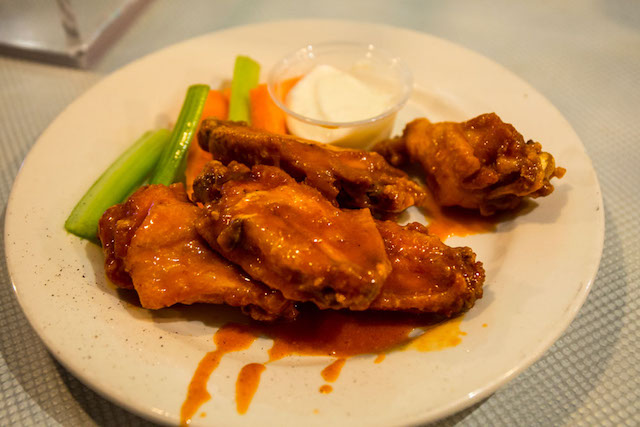 Bonnie's Grill: Park Slope's Fifth Avenue is lousy with mediocre places to eat, but the diner Bonnie's is always a solid choice up near the President Street zone. The star of the (minimally-produced) show here are the Buffalo Wings, which I always order as "Hotter," and they always ask: "Are you suuuure??" because these spiced-up suckers are no joke and make my lips sting for hours. Delicious, though.

Bonnie's Grill is located in Brooklyn at 278 Fifth Avenue between Garfield Place and First Street (728-369-9527; bonniesgrill.com)