The 12 Best Burgers In NYC

Once relegated to a mid-priced menu's "safety" slot or griddled interchangeably at diners and taverns, today the hamburger also plays an important role in a fancy restaurant's repertoire, sometimes making exclusive appearances during lunch so as not to cannibalize sales from higher-priced dinner entrees, and always ensuring plenty of Internet ink from the insatiable blogger burger beat. Plus, have there ever been more faux-retro, faux-divey burger joints opening everywhere? With all the love and attention given to this once fairly-generic dish, it's little wonder that there are a LOT of very good burgers being served in NYC right now. These twelve, however, are the absolute best.

A note on methodology: I ate all of these burgers within the last two months—medium rare if applicable, with added cheese and bacon if it seemed integral to the experience—usually for the second, fourth, or twentieth time. I also wolfed my way through many others that didn't make the cut, including some of city's most frequently celebrated. This list is 100% correct and needs no improvement, but please tell me anything else I should try, especially in uptown Manhattan, south Brooklyn, and Queens. 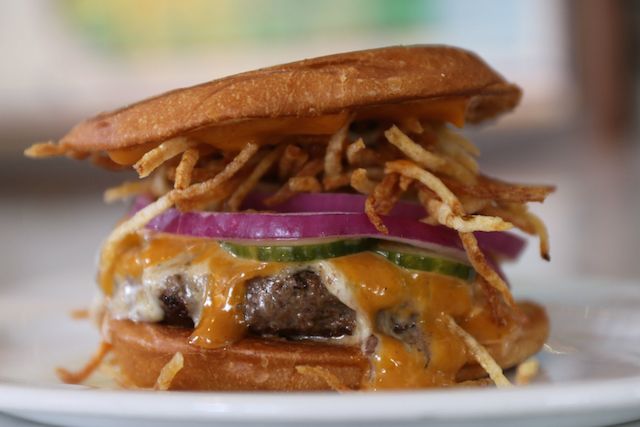 BAR SARDINE: Confusingly called the Fedora Burger, which is the name of one of Gabe Stulman's other West Village restaurants (there are six in total), this $13 mini-masterpiece features both a genius gimmick—crisp potato sticks piled right on top!—and a dense, intense meaty core. Smoked cheddar, BBQ mayo, crunchy cucumbers (not pickles) and a soft, almost sweet bun round out this lively little flavor bomb. Grab a window stool for prime people-watching. 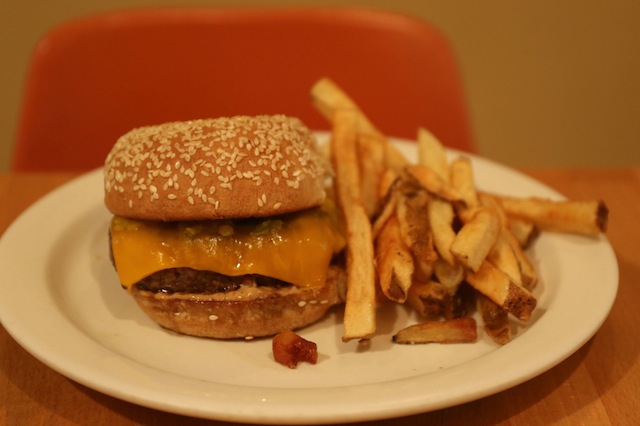 FRITZL'S LUNCH BOX: High, loose, and wonderfully juicy, the straightforwardly-named Hamburger ($13, cheese is a buck extra) at Fritzl's has been a thing of beauty since Dan Ross-Leutwyler first opened his backyard-boasting Bushwick spot in 2013, and it continues to delight and satisfy today.Toppings are minimal—a bit of creamy special sauce, a few tangy pickles, drippy cheddar—allowing the meat to really shine between the heavily sesame seeded buns. The fries are terrific, too, as is the rest of the menu.

Fritzl's is located at 173 Irving Place between Stockholm and Stanhope Streets in Bushwick, Brooklyn. (929-210-9531; fritzlslunchbox.com) 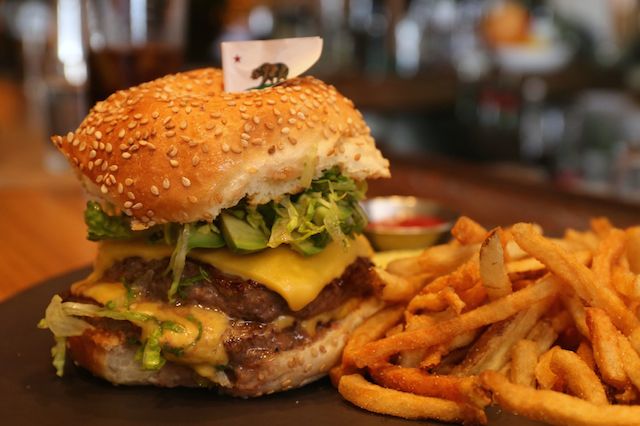 UPLAND: Chef Justin Smillie, born and raised in San Berdoo, brings his California love to the East with this double-patty, avocado-topped monster at Upland. Available only during lunch and totally worth whatever trip/lies-to-your-boss are necessary to get you here during the day, the $20 Upland Cheeseburger may give off a health-food West Coast glow (tons of shredded lettuce, plus the avo, plus the beef is "grass-fed", so maybe it counts as a salad?). But rest assured, this is a hefty, meaty meal, and it also comes with a small mountain of first-rate fries for added East Coast starch overload. Sneaky ingredient: spicy/sweet peppadew peppers. 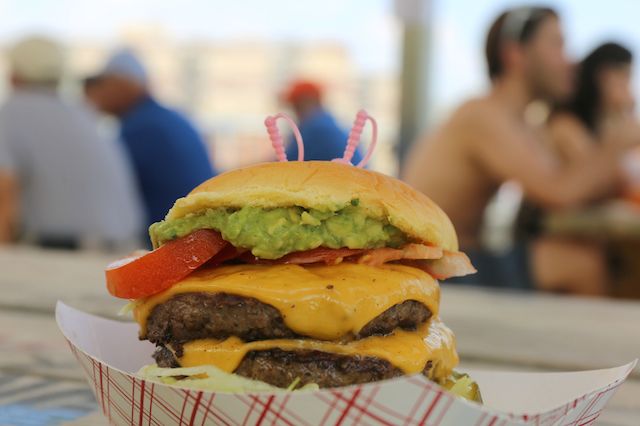 RIPPERS: This breezy, boozy, Roberta's spin-off on the Rockaway boardwalk is sadly closed for the season, but that just gives us time to simmer in anticipation for the first Hardbody of Summer 2016, right? And simmer and smolder you should, because this double-decker beast is the sexiest mountain of meat I saw (and, uh, ate) at the beach all year. It's salty, juicy, messy, and so so satisfying. And if the $9 Hardbody is more meat than you can handle, get the regular Rippers Cheeseburger for just $6.50.

Rippers is located on the boardwalk at Beach 86th Street in Rockaway, Queens. Closed for the season. (No phone; 86badvibes.com) 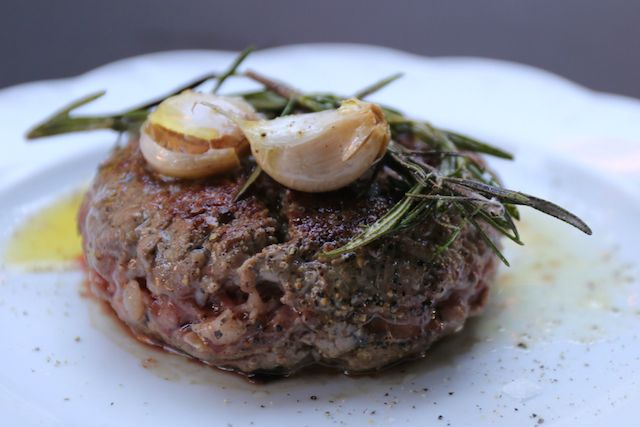 VIA CAROTA: The consensus on my social media feeds was that Via Carota's Svizzerina doesn't count as a burger because it has no bun. But fuck it, it's my list, and this is a phenomenal plate of burger-shaped meat, bread or no bread. In fact, most everything at Jody Williams and Rita Sodi's friendly, lively West Village restaurant is great, but the $21 burger—er, chopped steak—is total perfection. The deftly-aggressive seasoning (salt, pepper, olive oil, roasted garlic, other things), the balance between the seared crunch on the outside and the tender juicy interior, the rich fatty beef... of all the burgers I've eaten in the past two months, this is the one I think about, and crave, the most.

Via Carota is located at 51 Grove Street between Bleecker and 7th Avenue South in the West Village. (No phone; viacarota.com) 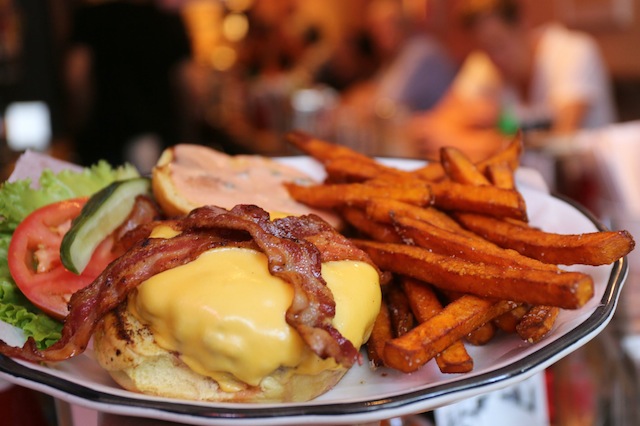 BLACK TAP: Black Tap is an oasis of sorts after Too Much Soho, boasting a low-key offering of a long bar, beer, sports television, easy camaraderie, and about a dozen different burgers on the menu. Every variety I've tried here has been good, but it's the basic $14 All-American Burger—single patty, melted 'Merican, lettuce, tomato, pickle, Russian-dressing-style "special sauce", regular ol' white bread bun—that keeps me coming back. Bonus: excellent Sweet Potato Fries, though they come with an additional $2 charge.

Black Tap is located at 529 Broome Street between Sullivan and Thompson Streets in Soho (917-639-3089; blacktapnyc.com) 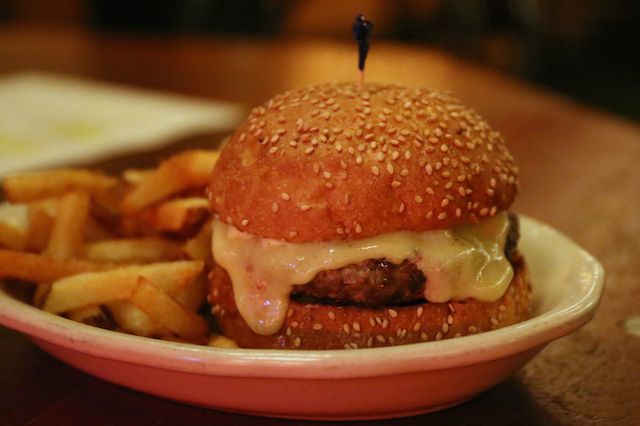 ROSE'S BAR AND GRILL At first I thought that Chef Andrew Feinberg had rolled out a larger-than-usual seed-studded bun for his exceptional cheeseburger at Rose's, but he told me that he actually shrank the patty for better balance. Whatever the bread deal, this wonderfully simple, no-garnish-no-sauce $15 beauty still qualifies as one of the best in the city, with its complex beef blend, sharp cheese, and buttered bun. It's so flavorful it doesn't even need the proffered ketchup. Do note, though, that if you hate salt, keep walking down Flatbush and eat at Feinberg's other celebrated restaurant, Franny's, instead. 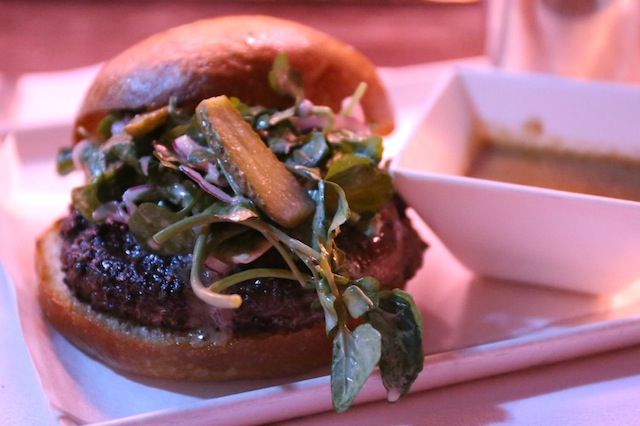 RAOUL'S: Only 12 of these meat masterpieces are sold each night at this classic Soho bistro, and you can only order them at the bar (though note that they're now available at weekend brunch, and served at your table!), so they're all usually spoken for pretty much the moment the doors open at 5 p.m. But it's SO worth the rigmarole, not just for the big pepper-crusted burger itself, topped with spicy watercress, cornichon, triple-creme cheese, all on a challah bun, but also for the side of Raoul's transcendent, cream-and-cognac au-poivre sauce that the kitchen has "spent 45 years perfecting". Your friendly barkeep will suggest you cut the burger in half for better dipping, and you should listen to him. 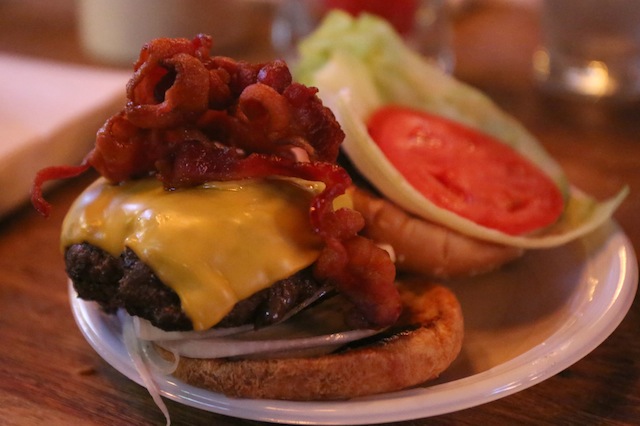 CORNER BISTRO: For when you need a hit of "old New York" (or, like, whenever you first moved here, or got your first fake ID, and went drinking in the West Village), Corner Bistro satisfies like few other places still standing. Not only has the room been left pretty much unchanged since the night you last stumbled in, but the $9.75 Bistro Burger, a half-pound behemoth topped with iceberg, tomato and like four crisp strips of bacon, remains the city's bar-burger standard. It's also a fine choice with which to start/end an autumnal day-drinking adventure. 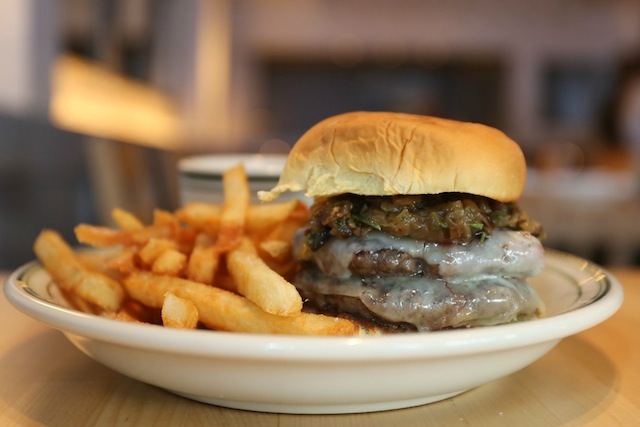 HOUSEMAN: The Houseman Burger is one of the prime anchors at Adam Baumgart and Ned Baldwin's ambitious, casual spot in Hudson Square, and it plays its part with aplomb. A $17 double-decker beauty, dripping with juices and two layers of melting cheese and grounded by just the right amount of caramelized onion and roasted mushroom relish, this is a fancy-pants burger that you don't have to overanalyze to enjoy. And the bun, when I tried it, was soft and buttery as well.

Houseman is located at 508 Greenwich Street, between Spring and Canal Streets in Tribeca. (212-641-0654; housemanrestaurant.com) 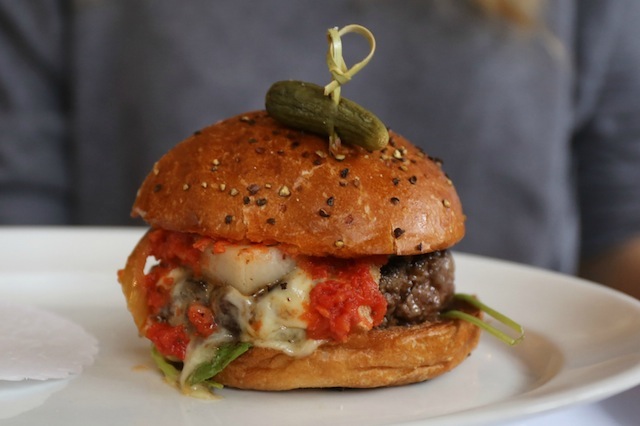 BAR BOULUD: Bar Boulud became an instant hit for Lincoln Center pre-/post-gamers when it opened in 2008, but since I'm generally neither, it wasn't until last summer that I discovered the tres magnifique $21 Frenchie Burger lurking on the (tres pricey) menu. The hefty beef patty is good here, and the nutty raclette and roasted tomato compote immediately get your attention in a "whoa-this-is-different" way. But it's the slab of soft and melty pork belly confit, unsurprisingly terrific at Daniel Boulud's charcuterie playground, that really sets this burger apart. It's perfect for a savage night at the opera, or whatever else you have going on. 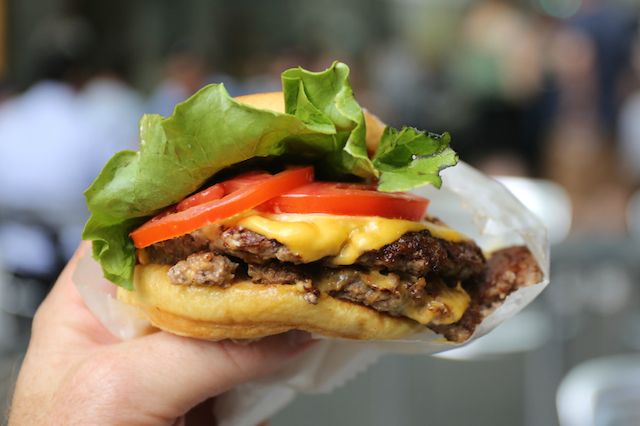 SHAKE SHACK: These days I usually order the SmokeShack at Shake Shack, which comes with bacon and hot cherry peppers. But for research purposes, I went back to the OG ShackBurger—a $7.99 double, with cheese, tomato, lettuce, and ShackSauce—to see how the Patty That Launched An Empire has held up over the last decade or so. And the answer, thankfully, is very well indeed. Although the lines and the tourists and the merchandising and the worldwide expansion make you nearly root for this giant to be toppled, the Shack still gets it so right, every single time.

ShackShack has a number of locations throughout the city; check their website for details. 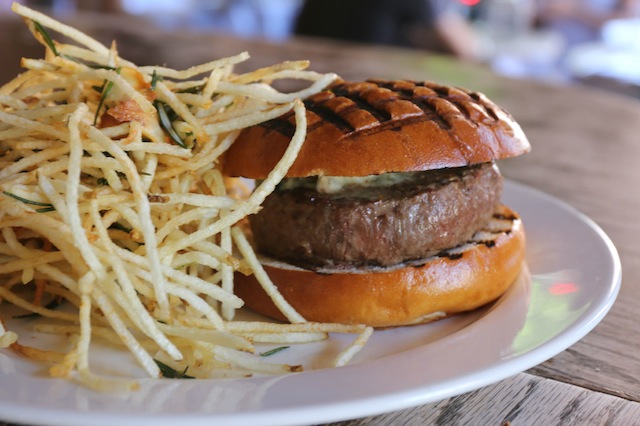 Best Burger at a Pizza Restauran

: Burger Joint at the Parker Meridian