The 12 Best Bakeries In NYC

They claim that Man cannot live on Bread alone, and it's true—Man also needs cookies, cakes, pastries and other complex carbohydrate-based balls of sugar and butter to keep from weeping when the temperature dips below 30 degrees. Or whenever, really—life without cake is a terrible thing. And no matter how hard Bloomberg's anti-obesity campaign tries to beat us down, there are plenty of bake shops, boulangeries, pasticcerias and other beacons of bread-and-brownie goodness in this city to keep us satisfied all year long. Here are a few of our favorites, in no particular order; as always, leave your recommendations, complaints, recipes and fits of rage in the comments. 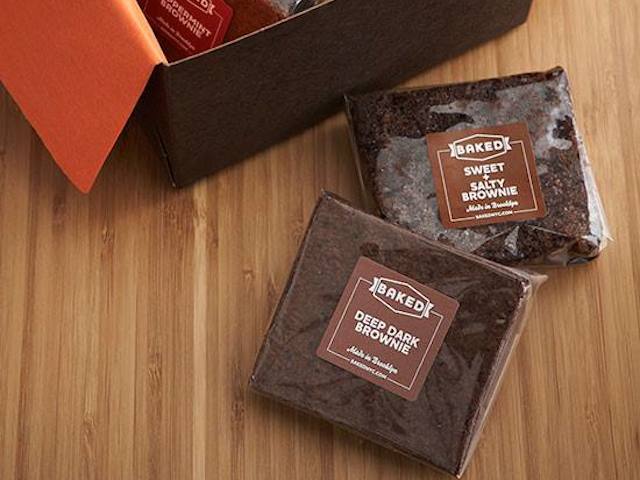 BAKED: This little Red Hook bake shop has made waves with its signature Sweet + Salty Brownie, which has earned high praise from the likes of Martha Stewart and the Food Network's The Best Thing I Ever Ate crew over the years. And though the aptly-named treat's well worth the media attention, it's not the only item worth scoping out. Check out their Chunkwiches—ice cream sandwiched between thick, homemade cookies—the thick, gooey cloud cookies and their Millionaire Bars, made with caramel, chocolate and short bread. If chocolate's not your thing (WHO ARE YOU?!), Baked also makes a killer key lime pie dubbed the "Lemonlime," with creamy custard layered on top of a crispy, golden crust. 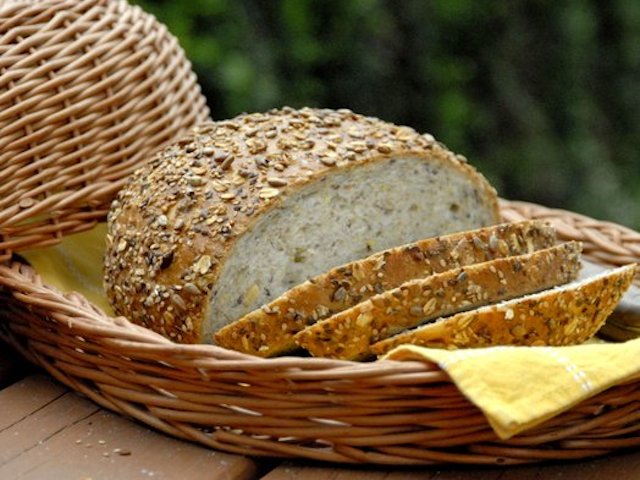 NORTHSIDE BAKERY: Bagels might be New York's bread of choice, but even the best bagel makers can't beat that thick, hearty hunk of Old Country rye dipped in hot soup when the season calls for it. This Polish bakery—my go-to during my brief stint in Williamsburg—does that bread better than anyone else in the neighborhood, baking thick-crusted $3-or-so loaves of rye, 7-grain, whole wheat and the like. Northside's rolls, most of which run about 45 cents a pop, are also exceptional; try the horseshoe-shaped Rogal Piekarski, a large, salty roll dotted with poppy seeds, or opt for a few cross-imprinted Bulka Bawarska (bavarian rolls).

Northside's also got an appetizing array of pastries, cakes, pickles and pierogi on display, but your best bet here is to stick with the breads. And be sure to make your selections quickly—the employees do not take kindly to dawdling orderers here, and they will not hesitate to snap at you if you take your time at the counter. That lesson was learned the hard way. 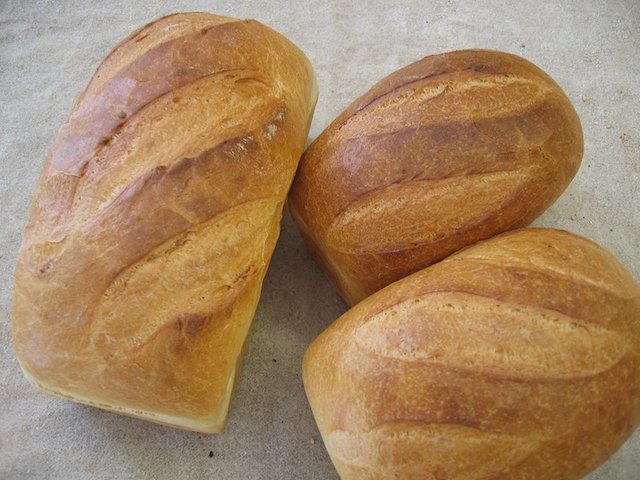 SILVER MOON BAKERY: This Euro-style bakery's been kicking around the Upper West Side for a little over a decade now, serving up a wide variety of breads, pastries and other carb-y offerings to the adoring uptown masses since 2000. Silver Moon's probably best known for their egg-heavy challah bread, traditional Jewish braided loaves, and they can clean out on Fridays and on Jewish holidays. They've also got delectable Continent-based goodies like sacher torte, a thick, goey Austrian chocolate cake, an assortment of French macarons and flaky elephant ear-shaped palmiers and plenty of baguettes, loaves and rolls, just like any proper boulangerie across the Atlantic. 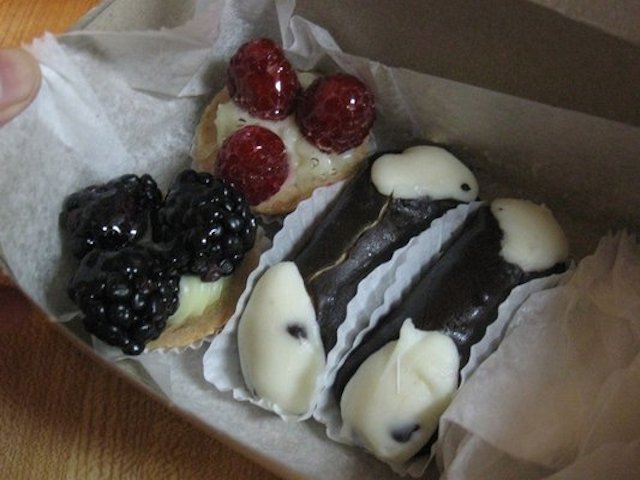 LA GULI PASTRY SHOP: You don't have to come from an Italian family or be the world's biggest fan of The Godfather to tell the difference between a really good cannoli and a frozen cannoli kit creation. But the ricotta-filled goodies over at this Astoria pasticceria puts even the closest Neapolitan imitations to shame, boasting fresh crusts rolled up over not-too-sweet creams inside. La Guli's got a wide variety of cannoli up for grabs, but we like the chocolate-dipped ones best; also of note are their sfogliatelle, flaky Neapolitan pastries doused with powdered sugar. Buon apetito, ye sweet toothed masses. 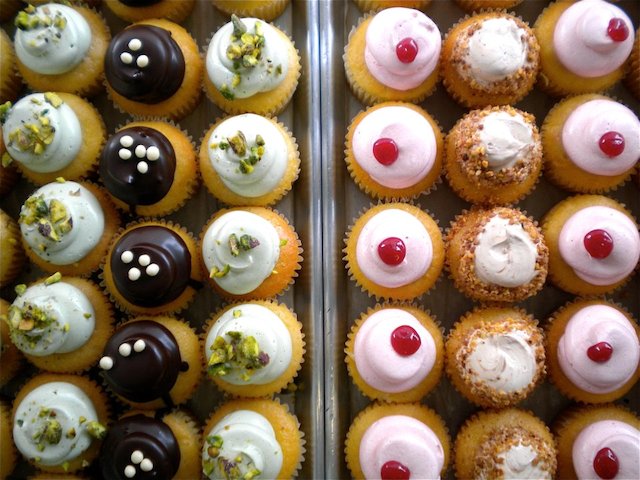 EMPIRE CAKE: That infernal cupcake fad that once swallowed NYC with cutesy, fluffy cupcake shops seems to have finally died down a bit, leaving some of us with a bad taste of too-sweet frosting in our mouths. But not all cupcakes are evil, and the little creatures cooked up at this Chelsea bakery way outshine the hipper Sex and the City type food noise. Empire Cake's got a rotating selection of 15-or-so cupcake flavors, like carrot cake, ganache and creamsicle, and you can have special custom orders whipped up as well.

As its name suggests, the bakery also offers a wide selection of classic and "deluxe" cakes, plus they do custom cakes for weddings and other cake-worthy occasions. We're also big fans of their snack cakes, white and dark chocolate-dipped Twinkie and Swiss Roll-esque cakes that come in flavors like passion fruit, lemon and pumpkin. 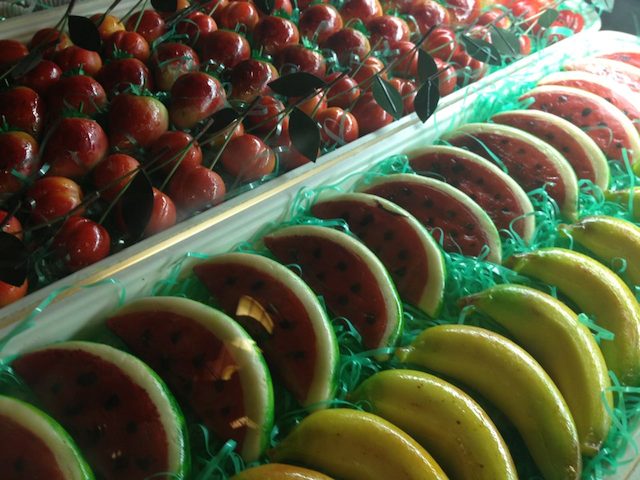 F. MONTELEONE BAKERY AND CAFE: Like everything else old-school in this city, classic Italian bakeries are a dying breed these days. And though this century-plus-old Court Street spot is a relative newcomer to the scene in its current incarnation, having opened its doors under new management in 2011, owner and Sicilian native Antonio Fiorentino's been whipping up pastries since his pre-teen days, and he knows what's up when it comes to crafting sweets. The family-owned shop boasts everything from pine-nut crusted pignoli to cannoli to fruit-shaped marzapan, flaunting piles of the appetizing treats in glass display cases that line the whole bakery.

As a bonus, the Monteleone's crew makes their own gelato, and in the summer they offer a selection of Italian ices that go above and beyond the frozen stiff that comes out of a Gino's cart. Do note, though, that you can't get bread here; for hearty, carb-heavy Italian pane, head to nearby Caputo's Bake Shop and pick up an olive loaf or two. 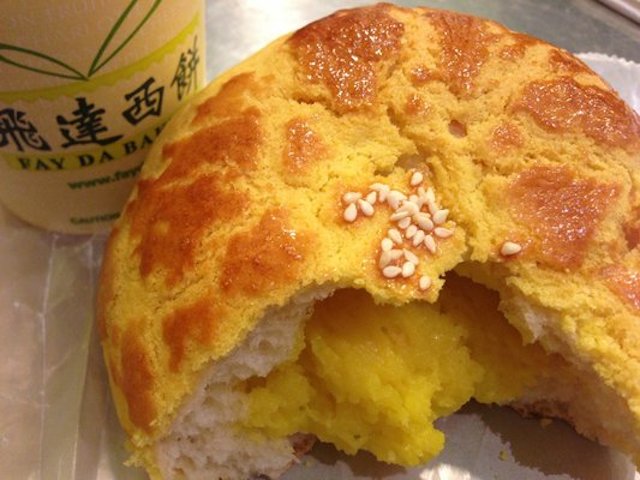 Kaya bun from the Mott Street Fay Da (Via Yelp)

FAY DA BAKERY: Mooncake season might have to wait until next September, but you can still gorge on a whole bunch of Chinese delicacies at this cheap bakery chain, which got its start on Centre Street back in 1991. Today, Fay Da's got outposts in Manhattan, Queens, Connecticut, New Jersey and China, dishing out stellar taro buns, pineapple buns, egg tarts and milky sugared coffee to the masses. In addition to the sweet stuff, Fay Da serves up steamed and baked savory buns and pies; come in for a feast, and if you're heading to one of the chain's Chinatown locations, expect the place to be packed at all hours. But, again, egg tarts. Get 'em while they're fresh.

Fay Da has a number of locations in Manhattan and Queens; visit fayda.com for more information. 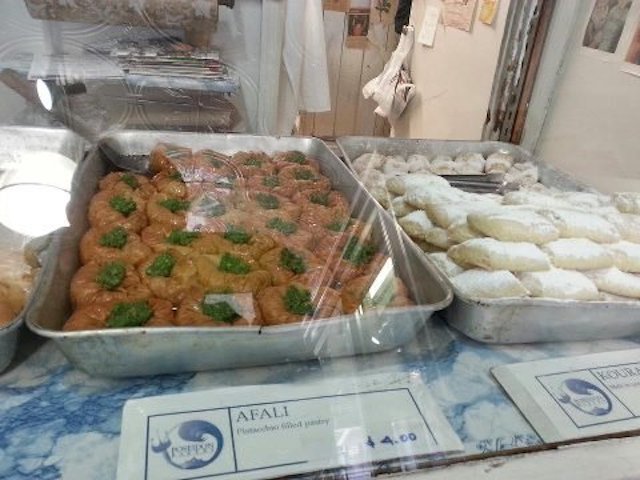 POSEIDON BAKERY: If it's baklava you're craving, look no further than this little Manhattan zacharoplasteío, which pumps out mindblowing Greek sweets and savory pies in its Hell's Kitchen space. The baklava is a must here, the flaky phyllo dough moist and sticky under the weight of heavy-laden honey. Even better than the baklava is the alfali, a round phyllo dough pastry stuffed with ground pistachio nuts and similarly drenched in sweet honey, and the galaktobureko—phyllo dough filled with a semolina-based custard—might be the best thing that comes out of Poseidon's ovens.

Most pastries here run $3-$5 each, which may help keep you from gorging yourself on the saccharine treats; if you're one of those mutants born without a sweet tooth, Poseidon's also known for their flaky spanakopita, or spinach pie. Maybe run around the block a few times when you're done stuffing your face. 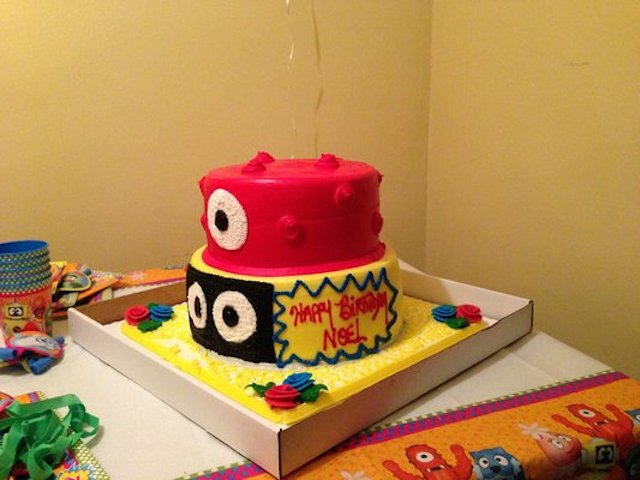 Yo Gabba Gabba cake from Valencia Bakery. (Via Yelp)

VALENCIA BAKERY: This Mott Haven shop's been cooking up super sweet, moist and airy Dominican cakes in Mott Haven for over 60 years now, and it's earned its place as a birthday staple in the area over the decades. The cakes are ornately decorated to order, and packed with fruity fillings like guava, coconut and pineapple; they're so popular that people who have since moved out of the neighborhood have been clamoring for the company to add a mail-order business that'll send out the goods all over the country. But though you can't order a cake from out of town just yet, you can get Valencia's custom confections delivered within the city, which is good news for New Yorkers far and wide. 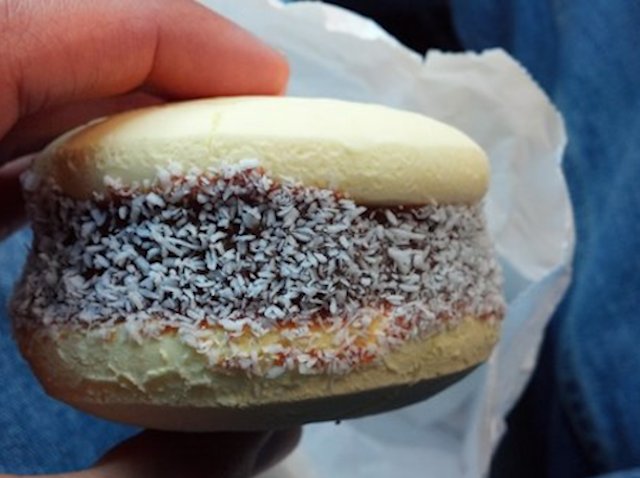 LA NUEVA BAKERY: For a slice of South America, head over to this Uruguayan shop, which whips up fresh-baked delicacies from all over the continent. La Nueva makes a wide variety of Colombian and Uruguayan empanadas that come crispy and filled with meats and cheeses. They've also got pastries like bunuelos (Colombian fried dough balls), churros and alfajores, which are dulce de leche-filled sandwich cookies.

If you're looking for something fierce to wash down your snacks, La Nueva also sells mate, a caffeine-heavy tea made with the ground leaves and stems of the rainforest-based yerba mate plant. It'll give you enough of a jolt to get you out of the deepest caramel-induced stupor. 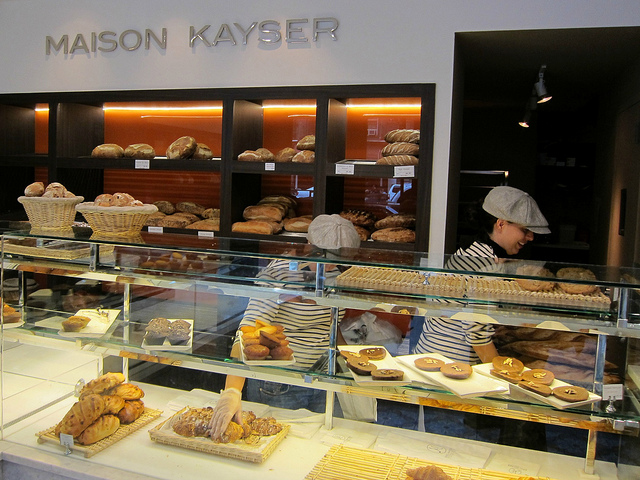 MAISON KAYSER: This Parisian chain has expanded quickly since hitting Manhattan in August 2012, branching out from its Upper East Side flagship and opening up outposts in Flatiron, Columbus Circle and Bryant Park. And though chain bakeries can be forces to fear, we have to admit this spot whips up one hell of a baguette.

The $3 Baguette Monge is thin and airy with a crisp outer crust, served best sliced with a wheel of Camembert, a bottle of Bordeaux and Serge Gainsbourg on vinyl. The boulangerie's got an assortment of loaves and pastries too, but beware: once you bite into one of these baguettes, that bag of Pepperidge Farm Light Style's going right in the trash, whole wheat be damned.

Maison Kayser has a number of locations in Manhattan; visit maison-kayser-usa.com for details. 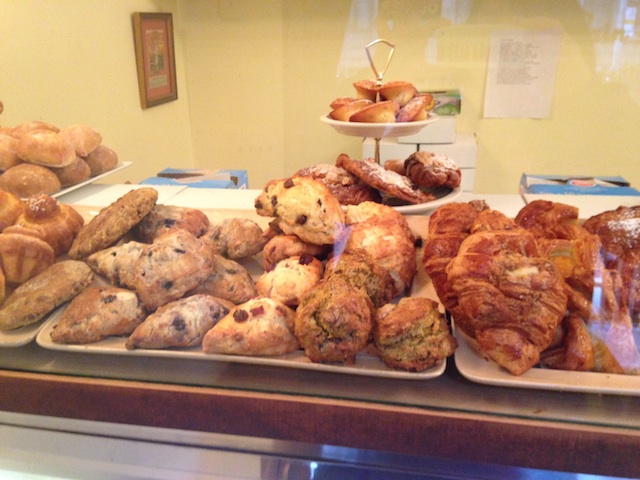 PAIN D'ÉPICES: I've lived in the same neighborhood for nearly 15 years (!), so I've formed very strong bonds with the local businesses. The shoe cobbler, the stationery store and the bakery. In fact, my go-to bakery, Soutine, at the corner of West 70th and Columbus Avenue, was where I'd buy birthday cakes for my friends, New Year cakes, Thanksgiving pies, my wedding cake and, when the time came, my daughter's first and second birthday cakes. So when Soutine announced it was closing last year (proprietor Madge Rosenberg had run it for 30 years, many with her late, incredibly nice husband Barry), I sobbed across the street.

Luckily, the tiny storefront was taken over by another bakery, Pain d'Epices, owned by Ali and Biba Naouai, allowing me a pit stop for goodies during weekend walks. Classic French offerings, like airy and rich brioche rolls and perfect pain au chocolat, as well as cakes and Soutine standbys (the heavenly chocolate mousse-and-meringe Concord Cake!) are still sold, and chef Francoise Ip has added some other wonderful treats.

We recently got pumpkin mousse cake and a fruit frangipane tart, with plums and berries, for Thanksgiving dessert and both were big hits. Also, the cheddar dill scone, flat and the width of a CD, is the stuff of savory addictions. I look forward to all the happy memories I'll make while eating their fare! (Jen Chung)