The 11 Best Shakshukas In NYC

Shakshuka—a dish featuring eggs poached in a sea of richly-seasoned tomato sauce—may have originated in North Africa, but its popularity has expanded beyond the continent, particularly in Israel and New York City, where many restaurants offering Moroccan, Israeli and Mediterranean fare offer it as part of their breakfast lineup.

Runny eggs mopped up with bread usually means morning, but the versatile dish is great for whenever a protein pick-me-up might be needed. Below, our favorite places to score shakshuka in NYC. 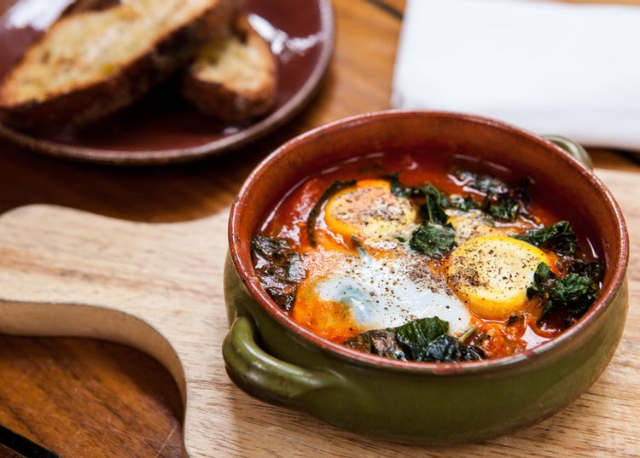 BALABOOSTA Chef Einat Admony may offer one of the most virtuous versions of shakshouka in the city, stuffing a cornucopia of vegetables into a fiery tomato sauce for maximum ruffage and flavor. "For my green shakshouka I add jalapeños, spinach, kale, swiss chard, and leeks," Admony tells us. "The flavor is great and you get the benefits of all the hearty greens. Plus the color is great." The chef serves her shakshouka for both lunch ($17) and brunch ($16) with the option to add hearty merguez sausage ($4) to make it a more robust and protein-packed meal. Grilled sourdough on the side for mopping means not missing a morsel of the flavorful and spicy tomato sauce. "It's been a best seller for years," according to Admony. 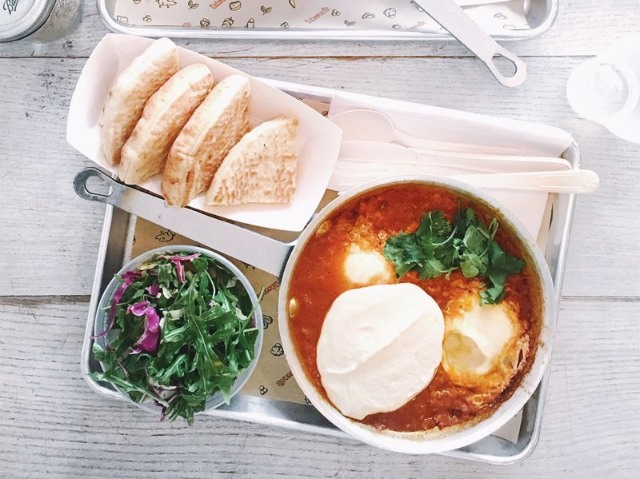 TABOONETTE This fast casual offshoot of Taboon specializes in "Middleterranean Pocket Food," the confluence of Mediterranean and Middle Eastern foods served in pita. That even means that, yes, they are offering shakshuka in a pita, too. But their classic preparation in a pan should be the go-to unless you need to go. Their zesty tomato sauce is further enlivened with sprigs of fresh cilantro, while a nice glug of nutty tahini gives the dish some creaminess and earthiness. Best of all: they serve breakfast all day, so if early rising on the weekends isn't your thing, this is your new shakshuka spot.

Studded with creamy chickpeas, hunks of tangy tomato and sweet red bell peppers and doused with generous dollops of spicy pepper sauce, the shakshuka at this Williamsburg Mediterranean staple packs tons of flavor and texture into one dish. The restaurant—run by two veterans of Hummus Place, along with chef Nir Mesika—uses a base of matbucha, a Moroccan salad made with tomatoes and peppers, which gets thicker as you stir in the runny egg. Ask for extra pita so you don't miss out on any of that flavorful concoction.

Williamsburg honorable mention: Reunion's version ($13), to which you can add feta, bacon or eggplant.

MIMI'S HUMMUS Since 2009, denizens of Ditmas Park have had this jewel of a Middle Eastern restaurant to call their local spot for superlative hummus and other Israeli, Moroccan and Iraqi cuisine—including shakshuka. Chef and owner Mimi Kitani makes hers unique by using both fresh and canned tomatoes, in addition to roasting the tomato and onion for lots of deep, rich flavor for the sauce. Jalapenos, garlic, cumin and cinnamon lend the dish some bite and some warmth and help flavor the tender and runny eggs, which are added to the pan with just enough time to warm them through.

DIZENGOFF Since opening in Chelsea Market last spring, this Philadelphia transplant has made a huge splash with its destination worthy hummus (with incredible house-baked pita to boot) and an outstanding tasting menu. That you can score one of the city's best versions of shakshuka here at one of the few backless stools that encircle the kitchen here is no surprise. Chef Michael Solmonov's version employs many of the classic ingredients, including onions, bell peppers, garlic, sweet paprika and cumin. He also uses coriander both in the sauce and also cilantro leaves on top for some color and brightness. If you're searching for that tiny bit of tart, you're tasting the grated dried lime, a signature addition.

MIRIAM Far and away one of the most popular places for shakshuka in the city, this Park Slope Israeli spot serves the dish seven days a week from 10 a.m. to 4 p.m.—a great way to avoid the brunch crush if you work a non-traditional schedule. Their version ($15) isn't spicy like many others on this list, but you can add a side of harissa if you must. Instead, the zippy tomato sauce is allowed to shine through, with sweetness from onions and peppers. An order comes with hummus and pita, making for a filling meal whenever you decide to drop by.

12 CHAIRS This duo of restaurants in SoHo and Williamburg specializes in authentic Israeli cuisine, but their menu includes all sorts of comfort foods for the breakfast hours, including french toast, omelettes and, of course, their version of Shakshuka ($12). Their traditional Moroccan tomato sauce has a bit of a kick, like many on this list, which can be cooled off with a side of crunchy Israeli salad of cucumbers and more tomato. An addition of Bulgarian feta ($3.50) is a must. The cheese is saltier and heartier than Greek feta and stands up well to the robust tomato sauce.

MEZETTO Chef Bahr Rapaport says he includes Spanish chorizo in his shakshuka ($18) because he "wanted to show how different flavors from around the Mediterranean can meld into one another," also noting the sausage's spicy and smokey notes. But for true heat lovers, try the restaurant's vegetarian version ($16), which Rapaport tells us includes whole jalapenos (including the seeds), chipotle puree, and a house-made harissa with crushed red peppers flakes, preserved lemon, roasted peppers, cumin and cilantro.

YEMEN CAFE Can "Shak-Shookah" be shakshuka without runny eggs? If it's Yemeni, absolutely, like at this duo of restaurants scrambling their eggs into a super flavorful plum tomato-based sauce. The tomatoes are seasoned with green chilies and a Yemeni spice mix called hawaii, made with cumin, black pepper, turmeric and cardamom.

LA SHUK Not many of the shakshukas on this list have automatically come with feta, a briny and salty addition that happens to be one of my favorite things to pair with these eggy tomatoes. In East Harlem, this Moroccan restaurant serves a Green Shakshuka ($15) studded with loads of fresh spinach and hunks of creamy yet crumbly feta cheese. On the side, another meal's worth of sides including crunchy green salad, triangles of whole wheat pita, and the restaurant's hummus made with marinated green olives.

JACK'S WIFE FREDA If you've noticed a color trend with shakshukas on the list, the version at SoHo/West Village staple Jack's Wife Freda probably jumped out in your scroll through to see if your favorite made the cut. Instead of a traditional tomato sauce, the restaurant uses green tomatillos—also known as Mexican husk tomatos—to form the base for two runny eggs. While related to the tomato—and not to be confused with unripe, "green tomatoes"—tomatillos have a more tart, acidic flavor than their red cousins. And unlike typical pita accompaniments, the baked eggs served here come with buttery pieces of toasted challah.

#best of gothamist
#eggs
#shakshouka
#Shakshuka
#original
Do you know the scoop? Comment below or Send us a Tip